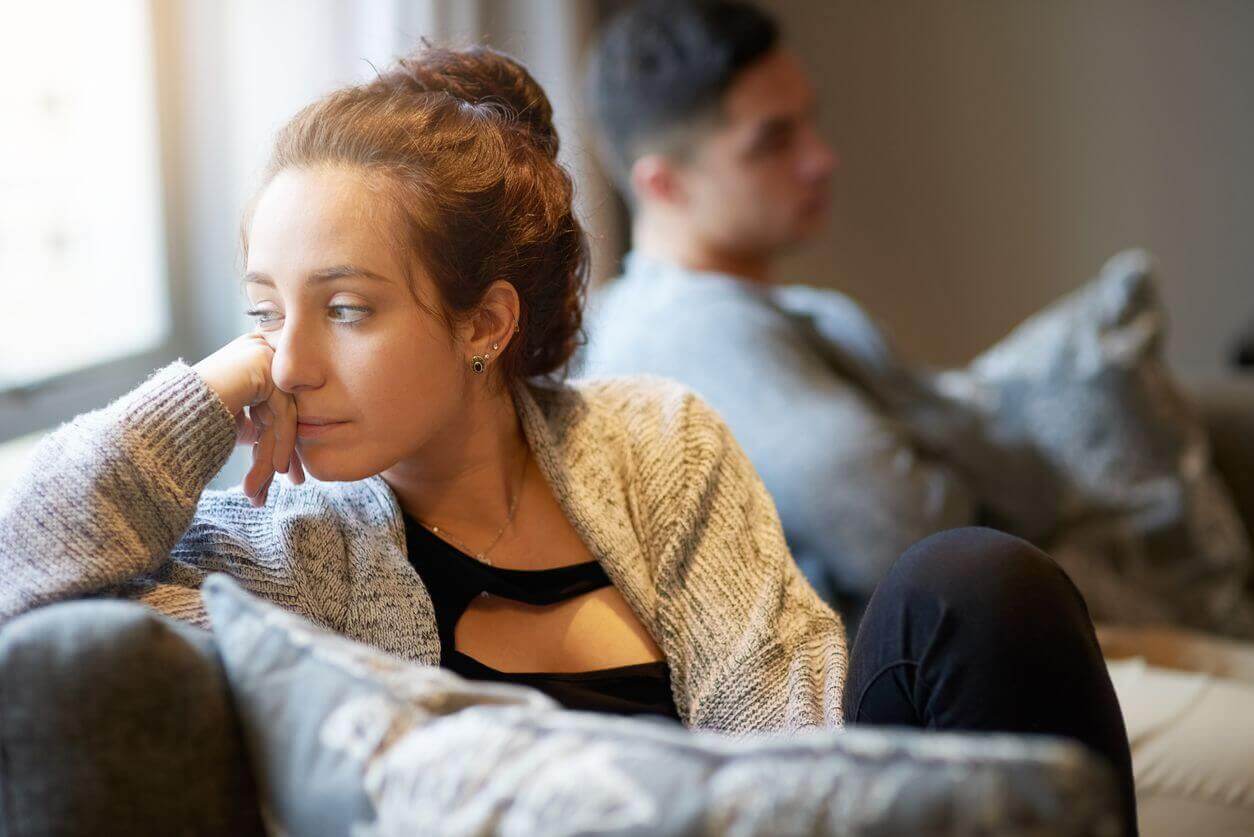 Can a marriage survive without emotional intimacy?

If you’re asking yourself this question, chances are you’ll have mixed feelings about any quick answer.

Maybe you can make things work with an emotionally detached husband.

But do you really want to?

And is this one of those articles that put the responsibility for saving the relationship squarely on your shoulders?

Read on to learn whether your husband truly is emotionally unavailable, what that does to you, and what you can do about it?

What is Emotional Neglect in a Marriage?

A marriage without emotional intimacy is a painful limbo where the ache only goes deeper the longer you’re together.

If he never risks being vulnerable with you, his words and actions send the same message every day: you’re not worth it.

And getting that message every day is bound to affect you in any of the following ways:

17 Signs of an Emotionally Unavailable Husband

If you’re asking yourself, “Why do I feel so disconnected from my husband?” chances are good you’ll see some (if not all) the following signs in him.

As you look through them, be aware that this disconnected feeling of yours is probably not a new one.

Conversations with him remain on the surface.

Try as you might to lead the conversation to a deeper level, he’ll use every tactic at his disposal to keep it on the surface, where he feels safest.

No matter how physically close you might be, he’ll do just about anything to avoid showing you any part of his soft underbelly. Better that you think he doesn’t have one.

He’ll keep his armor on at all times, even with abundant proof he doesn’t need it with you. He won’t risk what he still fears more than losing you.

He talks about wanting to let you in and trusting you more than he’s trusted anyone in his life.

But when it comes down to it, there’s a line he just won’t cross. And it keeps you wondering, “Is this as close as we can get, or do I just need to be more patient?”

Just when you think he’s about to let you further in, up comes a wall, and there’s no reaching him, no matter what you do or say. And it hurts every time.

He seems to prefer his own company to yours.

He’d rather do his own thing alone than spend time talking to you, getting to know you better, and revealing more of himself to you.

You scour your memory for evidence that he once preferred your company to being alone, but… the more you think about it, the only time he wanted you around was when he wanted something from you.

He shows little (if any) emotion.

When you’re emotional and wanting to see an empathetic response in him, if anything, the walls come up more quickly to keep you at a safe distance.

If he shows any emotion, he feels threatened, as if the dam will break, and he’ll be carried off by emotion.

He won’t risk being seen as “weak” or emotional. He’ll be “the strong one” and remain stoic and calm, even if part of him knows you want to see he’s capable of empathy.

He does little to contribute to the relationship.

And if he doesn’t think you’re doing enough, he’ll even call you out for it. Because if you’re not “up to the task,” he can easily find someone who is.

He expects you to do the work of reaching out to him, even if all you reach is another wall.

If you’re not always trying to give him what he wants from you, with no real effort on his part, he’ll use that as his reason for being distant with you.

He’s all about the physical part of “intimacy.”

There’s not a whole lot of connecting going on beneath the surface.

Keeping you focused on the physical is how he distracts you from your need for something more than that. It’s what he does to make your relationship a safe space for him.

And he may never want more than that.

He blames you (or someone else) for the lack of connection.

It takes two to connect, but even if you’re trying to kindle or rekindle something with him, he’s just not picking up the signals.

Or he brushes off your attempts and then blames you for not knowing how to connect with him.

Maybe he’ll chalk up his reticence to past experiences with his parents. Or maybe he’ll blame his last girlfriend or his ex-wife — anyone but himself.

He retreats into his shell whenever things get difficult.

The walls go up whenever he feels bombarded by uncomfortable feelings or when he feels that you’re pushing him too hard or expecting too much of him.

All you want is some proof that you matter to him.

He’ll use whatever has worked for him in the past — anger, aloofness, deflection — to strengthen his belief in his invulnerabil becauseuse the alternative is too risky.

He suggests you’re “too needy” or “too sensitive.”

Either of those is an athema to him. Unless you can change and become less emotional, he doesn’t know what to do with you or how to be around you.

So, he’ll find ways to avoid your company or to make his less comfortable for you.

To him, your emotions and your need to express them are a sign of weakness. And he won’t risk being “infected” by it.

Eventually, you learn to keep the walls up when he’s around.

He responds to your emotion with irritation or distrust.

He doesn’t know how to respond, and he resents you for putting him in that position. He may also assume you’re trying to manipulate him and simply brush you off.

If you grew up with someone like this, who did his best to love you but didn’t want to feel compromised by unpleasant emotions, you might marry someone who seems equally intent on loving you and similarly unable or unwilling to do the inner work.

He wants attention focused on his concerns (not yours).

Someone emotionally unavailable focuses on their own interests, concerns, and problems — not anyone else’s.

Their protective shell keeps them from feeling invested in or bothered to any serious degree by anyone else’s struggles.

So he’s likely to be irritated if attention is drawn away from him to someone else. How could anyone think their thoughts, ideas, or problems could be as compelling as his?

He won’t suffer any alterations to his routine (not even for you).

He doesn’t compromise; his way is the only valid way to see or do things.

Don’t expect him to be flexible when it comes to his living space and how he likes things when you start living together. Change anything at your peril.

If you share a home, you’ll probably leave certain spaces to him and try to carve out a small space for yourself, which you can make as nurturing a space as possible — because you won’t get that from him.

This isn’t false humility (or any kind of humility). It’s him letting you know he won’t make any real changes for you.

He won’t try to meet you halfway or show you the empathy you crave from him. He’s letting you know right away he’s not inclined to let you in.

You’ll get along best if you keep the relationship about sex and are careful not to ask too much of him.

After all, he’s been perfectly clear that he’s not willing to change or grow.

His previous relationships show a history of avoiding intimacy.

Around the time intimacy develops between a couple is the time he would bail.

He may even admit he never wanted to be in a long-term, committed relationship. He doesn’t trust it to last.

He never allowed his “serious” past relationships to progress once his partner desired to take their intimacy to the next level.

Of course, unless someone else tells you, you may never know about his past relationships because he can’t or won’t share with you.

Even his love for you is not enough of a reason to give up his control.

It’s not unusual for him to speak rudely to waitstaff or to take a condescending tone toward those who disagree with him. He has no patience for those who don’t see things as he does.

To make matters worse, he doesn’t respect your time or the commitments you make to other people if they interfere with what he wants from you.

He gets defensive or angry easily.

You find it doesn’t take much to get him angry or defensive with you or with anyone else.

That’s one emotion he never has difficulty showing. It keeps people at a safe distance.

All he has to do is raise his voice, slam a door, punch a wall, or glare menacingly, and everyone will know just how dangerous he can be.

If this is something you grew up with, it’s less likely to impress you, but it is likely to extinguish whatever connection you thought you had with him.

He pulls away as soon as you need something from him.

Unless what you want is something he wants, too, he’s likely to pull back and consider whether your “needs” are a threat to the control he feels he must have at all times.

If it’s a heart-to-heart communion you want, he’ll pull away and either try to lead you in a different direction (i.e., something he wants) or leave you to collect yourself.

You’re not welcome in his presence until you’ve regained control of your emotions.

How Do I Deal with an Emotionally Unavailable Husband?

Look up “feeling disconnected from husband,” and you’ll see the usual options for dealing with insensitive husbands.

The critical thing to remember is that it’s not all on you to make the relationship work — if it’s ever going to.

That said, consider the following actions, keeping your unique situation in mind:

Are you seeing the signs of an emotionally unavailable husband?

Now that you have a better idea of whether your husband is emotionally unavailable, what will do you with that information? Or what will you do differently this week?

It’s not that saving the relationship (if it can be saved) is entirely up to you. But if there’s still love there, why not explore your options?

Chances are, the safer he feels with you, the more likely he is to open up. But that’s not true of everyone. And it’s not something you’re obligated to “learn to live with.”

Your happiness matters, too.