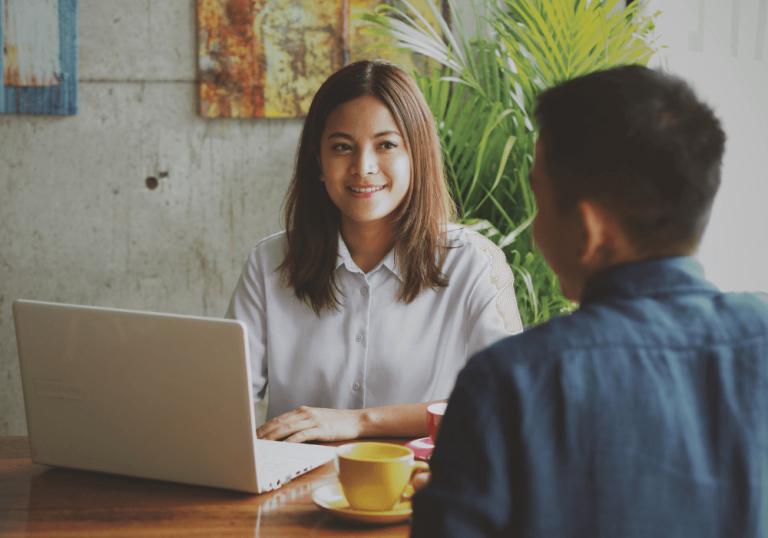 How do you know if a man is hiding his feelings?

You’re not a mind-reader, after all.

And if he has feelings for you, why doesn’t he simply admit them?

Or are you imagining things?

Maybe he’s not interested at all, and you’ve turned simple gestures into something they’re not.

Perhaps you only see what you want to see.

Whatever the case, you want to know the signs a guy is hiding his feelings for you.

Once you see what he’s not telling you, you can decide what to do about it.

Do Some Guys Hide Their Feelings When They Like You?

If this is a guy hiding his feelings at work, there’s a reason for that. Should you become romantically involved — only to find out your relationship doesn’t work — both of you would likely find it challenging to work together.

If this is a guy you only see outside of work, though, there are other possible reasons he’s keeping his feelings for you a secret:

Of course, the only way to know for sure why this particular man is hiding his feelings is to ask him.

But it makes sense first to make sure he’s actually hiding something.

What Are The Signs That a Guy Is Hiding His True Feelings From You? 13 Telltale Clues

Now you have a better idea of why a man might hide his feelings for you, you want to know without a doubt, “Is he hiding his feelings or not interested?” If you see the signs listed below, bet on the former.

1. He notices things you don’t expect anyone to notice.

Maybe he notices that when someone orders pizza for everyone to share, you pick off the olives (or the pepperoni, etc.).

So, one day, he orders a pizza with only the toppings you like (sans olives). It’s a little thing, but it matters.

He’ll likely notice things other people miss. And he may be the first to notice when you’re acting differently and show genuine concern.

He’ll pay closer attention to what you like and dislike, though he may not be obvious about it. And he’ll find ways to use that information to your advantage.

2. He remembers everything you say.

He listens to you when you speak. And he reflects on what he hears. He thinks about and remembers your words, so he’s likely to repeat them when a particular phrase seems an appropriate response to someone else — or you.

It surprises you because maybe you didn’t expect anything coming out of your mouth to interest him — let alone come out of his. It means he’s been thinking about those words and about the one who said them. And if your words matter to him, so do you.

3. His body language shows evident interest when he’s around you.

Look for the following cues:

You might think of other visible cues, but overall, his body language indicates a clear preference for you and an interest in spending more time in your company.

4. He’s stepping up his hero game.

He wants to be your hero, so he’ll be extra vigilant as he scans your environment for threats and looks for ways to anticipate your needs or wants.

Maybe he’ll just notice your coffee cup is empty and bring you a refill. If he doesn’t do this for anyone else, consider it a sign he’s paying attention. And you may have awoken his hero instinct. All men have it; how he manifests that drive will reveal how he sees you.

Depending on the guy, this could be a good thing or a good reason to run.

Thanks to his hero instinct and his growing attachment to you, he loves to help you when he can, and he’ll look for ways to be helpful. He’ll be extra alert for those opportunities to show he cares and wants to be there for you.

He’ll even change his plans for you. He’ll make space in his daily schedule to spend time with you or be available should you call for him or need help with something.

You know he has other responsibilities, so it means something if he’s willing to change his plans just to make more time for you.

6. He’s acting weird around you.

Nervous energy can do that to a person. Maybe he acts like himself when you’re not around, but once his eyes land on you, he flips a switch and either finds an excuse to leave or seems nervous or agitated around you.

It’s not that you make him nervous; he’s just unsure what to do about the feelings that come over him when he sees you.

Of course, to you, it’s adorable (or at least entertaining). So, bring on the weirdness.

7. He’s always asking you questions (about you).

He wants to get to know you. And maybe that’s not so weird, but, as far as you know, he doesn’t do this with anyone else. And he seems far more interested in learning more about you than in talking about himself, his accomplishments, or his toys.

It’s one thing if he only does this once and shows minimal interest in your answers. But this guy is paying rapt attention to every word that comes from your mouth.

8. He gets jealous when he sees you around other men.

He can’t help feeling jealous when he sees you talking with another man or smiling at him.

He wants to see some evidence that you prefer his company to anyone else’s (especially other men). So, if he sees evidence to the contrary, he may keep his distance and hide his true feelings as much as possible.

That said, you see the look on his face when you’re chatting with other men, and he’s clearly bothered by it. He might step in and look for ways to show he has more in common with you than the competition.

Alcohol lowers inhibitions. In other words, it makes a terrible blogging partner. It’s also not a good mix with phones or social media. Many have reason to cringe about phone calls they’ve made when under the influence.

If you’ve heard the saying, “A drunk person’s words are a sober person’s thoughts,” you know where we’re going with this. If a few drinks make him dial your number and get extra familiar with you, it’s an obvious tell.

His smile lights up his entire face, and that light reaches into you every time you see it. And you see it quite a bit whenever he sees you.

He also laughs more than usual. And he might put extra effort into making you laugh and show particular enjoyment when he succeeds. When you laugh, he finds it difficult (if not impossible) to join in.

11. He connects and chats with you on social media.

Maybe he hasn’t shown much interest in social media before (or perhaps he has). But when he finds out which social media channel you use most often, he either creates an account for it or reaches out to you from the one he already has.

Lately, he’s been one of your most active and engaging social media contacts. As a rule, the more he initiates contact and the longer he keeps the conversation going, the more interested he’s likely to be.

12. He looks for reasons to make physical (or other) contact with you.

He might put a hand gently to the small of your back to guide you through a crowd. Or he’ll reach out to touch your arm or hand to ask how you’re doing or whether you need anything.

He’ll look for reasons to initiate touch. And if you reciprocate, he’ll either backpedal or take it to a new level. He’ll also find reasons to call or text you to see how you’re doing or to “keep you in the loop” about something you don’t absolutely need to know.

13. You can feel when you draw his attention.

Maybe his attention is less obvious than you’d like, but you can feel it whenever he’s around: he’s looking at you. He notices when you’re there. He has this soft smile about his lips when he thinks you don’t see.

If you have strong empathic abilities, you can even feel what he’s feeling around you.

While you know he has his reasons for giving you space, you know in your bones something is there. And you suspect it wouldn’t take much to draw it out.

Is your guy trying to hide his true feelings for you?

Now that you know the signs a man is hiding his feelings for you, which of them have you noticed lately? Or which has been the most obvious?

If you think of this man as “your guy,” you’re probably wondering how this mutual attraction will develop into something more — and whether you should wait for him to make the first move.

But if you know he has feelings for you, there’s no harm in offering some encouragement. And by now, you probably know just how to do that.