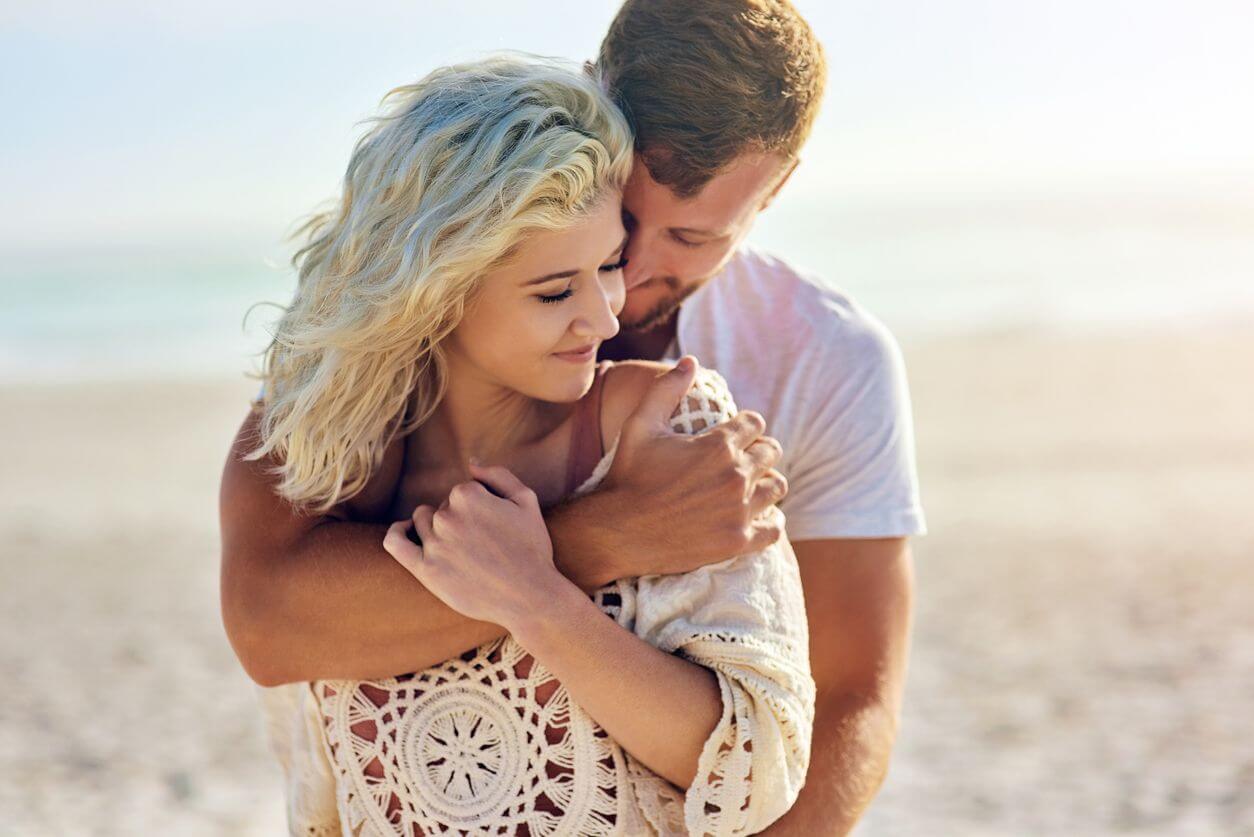 We’re talking about an unemotional man who only acts this way when he’s head over heels.

If you’re dating an emotionally unavailable man, you know what’s normal for him.

He doesn’t let people in.

But you’ve been picking up signs he’s trying to meet you halfway.

Read on to learn about nine telltale signs an emotionally unavailable man is in love with you.

And learn what makes that more likely to happen.

The short answer is an emphatic yes. Even a damaged human is still human. And humans still crave connection.

The question isn’t whether he can fall in love, but what it looks like when he does. As for how long it will last, it depends on the man in question and whether his attachment to you (or someone else) leads to a happy beginning.

But what experiences can make a man emotionally unavailable?

Whatever you know or don’t know about this man’s past and the demons he’s still battling on the inside, he’s still capable of falling in love.

So, what signs should you look for?

When a man opens up to you emotionally, it signals an important change in how he sees you, especially if, by default, he’s emotionally unavailable.

And you’ll see this change in any of the following ways. The safer he feels with you, the more he’ll show.

He’s protective of you. Not just anyone could trigger this instinct in him, but you have. And he feels responsible for your safety. He may offer to drive you home or walk with you to ensure you reach home safely.

And he may be quick on the defense if he sees anyone acting aggressively toward you.

Of course, if the idea of being his “fair damsel” doesn’t appeal to you, this would be the time to set some ground rules.

He even shows emotion with you, which is not something you’ve ever seen him do with anyone else.

Those rare moments of vulnerability can be disarming, but you wonder if they’re a trick.

He’s always been stoic and (by appearances) unaffected by others’ suffering and pain (which is not a compliment).

So, it comes as a surprise when you see the emotional depth he’s been hiding from everyone, for reasons he may or may not share.

3. He shares some of his past with you.

He’s pretty tight-lipped about his past with everyone else, and he’s mastered the art of evasion.

But with you, he takes a risk and lets you see some of it. He’s weighed the cost of exposure and the cost of losing you and decided the latter would be worse for him.

In any case, you’re flattered and intrigued. If the attraction is mutual, his new revelations about himself and his past will draw you closer and help you make sense of his behavior at other times.

4. He shows a desire to change.

He wants to be able to meet you in the middle. It’s not an easy thing for him, though, because unavailable men usually have painful experiences they’d rather not revisit.

Those experiences have shaped how he relates to others — even you.

But what you’re seeing in him now tells you he wants to be more open to you. He wants to draw you in and hold onto you for as long as he can. He wants to give you a reason to stay.

He doesn’t want you to try and change him; he wants to do the work himself. Let him.

Emotionally unavailable men tend to avoid commitment and long-term relationships as a whole. But he can’t help seeing you in his future.

In fact, he no longer wants to imagine a future that doesn’t have the two of you together.

Your relationship has become too important to be a temporary or seasonal thing. And he’ll drop hints about a future with you in it if only to see how you react.

If he’s talking about it, even casually, pay attention.

6. His words and actions line up.

This is not his default setting. Emotionally unavailable men might say pretty things to win you over, but unless they’re in love (and sometimes, even when they are), their actions don’t match their stated intentions.

Fear is most likely at the root of that. When it comes down to it, he just won’t take the risk unless he sees something he wants more than safety.

If he’s in love with you, he’ll make more of an effort to follow through.

7. He values your opinion — and even asks for it.

He makes a concerted effort NOT to talk over you or interrupt you when you’re talking. And this is a guy who is generally fine with cutting people off and walking away while words are still coming out of your mouth.

But now… he’s acting weird. He’s listening. He might even be actively listening, which is so not him. It makes a nice change while it lasts. And you hope it does.

8. He doesn’t hesitate to introduce you to his friends.

He doesn’t even make it weird or verbally back away from you — “It’s cool. We just work together,” etc.

He doesn’t seem remotely embarrassed that he was caught making eye contact with you and even smiling.

He’s probably still playing it cool, but you pick up just a hint of pride when he introduces you. And it feels good.

You can feel that he’s telling them, “Remember this person, and show her respect; she’s important to me.”

It might start out on the physical plane, but if he’s falling for you, he’ll want a deeper connection.

And that could mean backing away from the sex, which tends to eclipse everything else and paying more attention to the growing emotional bond.

You’ll spend more time talking and getting to know each other, including things no one else knows (about either of you).

You might still connect physically, but that won’t be the main reason you’re together.

How to Make an Emotionally Unavailable Man Fall in Love

Loving an unavailable man is frustrating enough when you know he only has eyes for you. But what if he doesn’t?

Is there anything you can do to get him thinking of you the way you think of him?

While the following tips can’t actually make him fall in love with you (nothing can), they’ll at least make it more likely to happen.

Is your emotionally unavailable man in love?

If you’re hoping to encourage the man in question, keep the above tips in mind and remember that true, deep feelings take time to develop.

And no one can tell you when or if the man you’re thinking of will fall in love with you and let you in.

His emotional unavailability isn’t something he did to himself. But he has his own choices to make, And no one (including you) can rush him into growing and letting go.

But then, no one likes to be rushed into that.