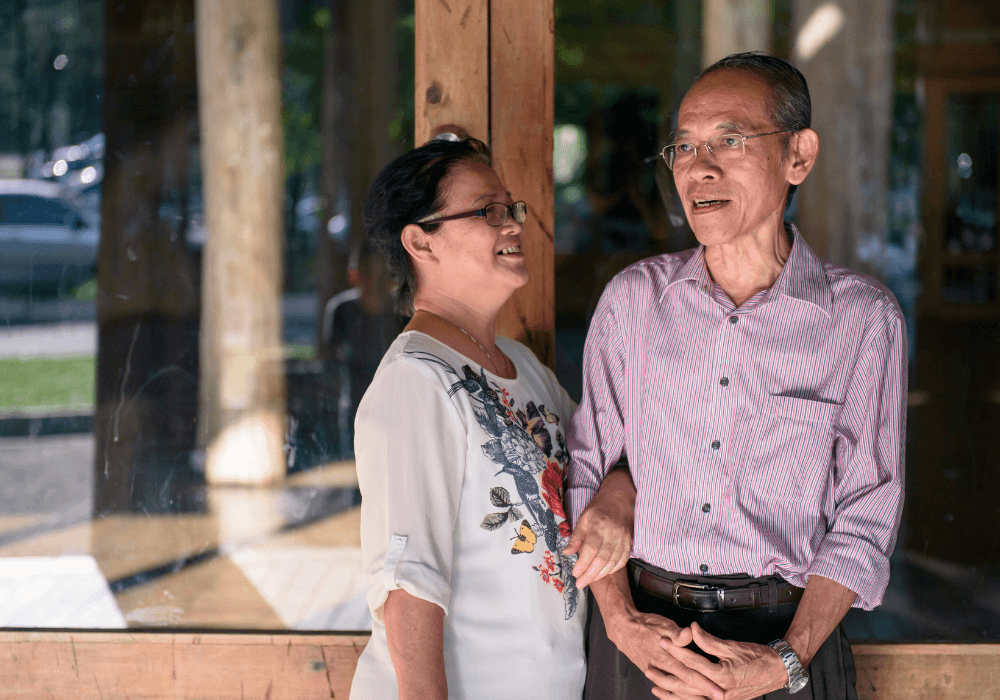 Is he the one for you? Or are you just tired of looking? No one deserves to be someone else’s last resort, after all.

If only you could find an “Is he the one quiz” that would give you a clear “yes” or “no” answer.

Shouldn’t someone get on that — maybe within the next day or so — and send you a link when it’s ready?

How are you supposed to be sure he’s husband material without some help from those who’ve been where you are?

It turns out there are some tell-tale signs you can look for.

Look through these signs he is the one you’ll want to hold onto. Think carefully about your situation as you read each one. It’s tempting to see only what you want to. And you want to answer the question, “Is he the one to marry?” with a confident yes.

But knowing he’s the one is not the same as wanting him to be.

Maybe you don’t finish each other’s sentences (which would get old, anyway), but you’ve put in the time to get to know each other. You know what he likes and vice-versa. You’re never bored in each other’s company. And you never feel alone when he’s there.

I mean, the physical stuff is definitely enjoyable, but you know it’s not enough for a strong, committed relationship. Fortunately, your relationship is about much more than cuddle time. You’d enjoy each other’s company even if you couldn’t touch each other. Neither of you would be thinking, “Why are we together?”

3. Your connection is soul-deep.

You connect on a deeper level with each other — so much that you each feel a deep stirring within you at the mere thought of the other person.

And you look forward to spending time together. He even looks for ways to spend more time with you. And he’s fully present when he can.

You have no doubt he’d risk his life to keep you safe or to get you out of a dangerous situation. But you also know he won’t violate your personal autonomy just to do what he thinks is best for you. He balances his protective instinct with genuine respect for you.

5. You feel at home with each other.

You feel most at home when he’s there with you. You trust him to treat you with kindness and care about how you feel or what you’re thinking. Wherever he is is a safe space for you. And while you own your own feelings, you’re grateful to be with someone who helps you feel calm and grounded.

6. You respect each other (and it shows).

You see in his actions and hear in his words that he respects you unconditionally. And seeing the way he treats everyone he encounters fills you with warmth and admiration. He’s not putting on an act to get something from you, nor is he trying to placate you. You walk side by side in mutual respect.

7. Each of you respects the other’s independence.

Much as you love spending time with him, it’s good to see him pursue his own interests and take action to improve his situation. He’s not counting on your combined assets financing a more impressive lifestyle. And he trusts and admires your independence, too.

Neither of you expects the other to bail you out if you make a mistake.

8. You get along with each other’s families.

You don’t have to be close to his family members, but you do get along well enough. You know that, if you marry him, you’ll also be binding yourself to his family, for better or for worse. And whatever influence they have over him, you trust him to have your back.

9. You have compatible visions for the future.

Each of you has a prominent place in the other’s vision for the future. Whatever challenges you’ll face, you know that what you want is compatible with what he wants. He doesn’t expect you to sacrifice the life you want to conform to his expectations and vice-versa. You can move forward together and help each other along the way.

10. You don’t have to agree on everything.

You can agree to disagree — on some things, anyway. The beliefs you don’t share don’t create a wall between you because your bond is stronger than your differences. Whatever differences you do have don’t make either of you think less of the other. You can disagree without feeling threatened or disrespected.

11. You are thoughtful and kind to each other.

No matter how much you love him, if he’s thoughtless or even abusive toward you (in any way), he’s NOT life partner material. In a healthy relationship, both of you treat each other with tender regard and consideration. For example, you wouldn’t insist on wearing a specific perfume if you knew it contained ingredients he found impossible to be around.

12. He knows you consider him an essential part of your life.

You show him by your words and actions how important he is to you, how much you value him and what he brings to your life. You let him know, too, that your life is better with him in it. In fact, it’s so much better that you’d rather not imagine a life without him.

13, You know he considers you an essential part of his life.

He lets you know in a variety of ways that he can’t (or doesn’t want to) imagine a life without you, either. He shows you how grateful he is to be in a relationship with you and never takes you for granted, even if you’ve made it clear you’re not going anywhere.

You don’t have to act like someone else when you’re with him, even when his friends or family are around. He loves you just as you are, and he expects those who care about him to see in you what he sees. You don’t worry about what others might think of you. It’s enough that he sees you.

15. He doesn’t blame you or bail when things get hard.

Your relationship hasn’t been without its challenges, but you now know he doesn’t storm off or deflect and blame you when things get messy.

You can disagree or call him out for something and trust that he’ll be both reasonable, thoughtful, and respectful — not petty, egotistical, or vindictive. He stays and works with you to make things better.

16. He doesn’t dismiss your concerns or emotions.

He never brushes off your concerns by calling you “paranoid.” And he never dismisses your emotions as if they didn’t matter. He trusts and values your instincts. He loves that you rely on your intuition and even asks you to consult it on important questions. Whether your gut tells you, “Go for it” or “Abort mission!” he respects it.

He has a great sense of humor, and he’s not too proud to laugh at himself.  Because he’s confident, he doesn’t take himself so seriously that he takes offense when someone teases him, either. He loves your sense of humor, too, and enjoys laughing with you.

This is a man who knows what he’s looking for and what he wants out of life. Because you know this, you trust he won’t drop you when things get hard or if he happens to meet a younger version of you. He leaves you in no doubt that you’re his favorite person.

21 Top Signs Of Attraction You Must Know

He has opinions of his own, and he’s not afraid to share them — with you or with others. He doesn’t hide behind you or avoid discussing difficult subjects. He’s thoughtful and considerate of others, but he doesn’t pretend not to have an opinion if he has one. He articulates his views clearly and without arrogance or condescension.

20. He shows a real interest in your viewpoint.

He cares about what you think. You have shared interests, and he loves just to sit and talk with you about whatever comes to mind. He values your insights and ideas, just as you value his. He’s open-minded enough to appreciate different viewpoints and opinions when you express them. He listens without judgment and thoughtfully considers your words.

21. He’s willing to meet you halfway.

While he won’t sacrifice his core beliefs to please you or anyone else, if he can meet you halfway without betraying you both, he will. He sees the bigger picture and will do what he can to honor your beliefs and core values as well as his own.

He encourages you to keep learning and growing, but he’s not trying to change you into something you don’t want to be. He loves and respects you as you are right now. He might ask you to try something new simply because he’d like to enjoy it with you. To him, you’re already everything he wants in a life partner.

23. He cares about your interests.

You probably have some interests he doesn’t share, but he even takes time to learn more about those simply because he wants to know you better.

It means a lot to him, too, that you care about what interests him. You don’t resent his spending time on interests you don’t share, and vice-versa.

He’s continually seeking knowledge about things that interest him. And as soon as he learns about your interests, he makes time to learn about those, too. He’s always learning something and excitedly sharing new discoveries with you. His energy is contagious; he inspires you to be more curious and to ask more questions.

He takes daily action to build the habits that help him become the person he wants to be and to accomplish the goals he’s set for himself. He doesn’t float unconsciously through life, nor is he stuck in survival mode. His habits help him focus on what’s real and essential, not just on what’s clamoring for his attention.

He doesn’t bother with false modesty or pointless self-deprecation, though he might tell a self-deprecating joke now and then just to lighten the mood or steer the conversation in a more positive direction. He knows his value and takes pride in his accomplishments, just as you’d want him to. His modesty is genuine, not based on fear or insecurity.

28. He treats former dating (or marriage) partners with discretion and respect.

Be warned if your guy trash-talks one or more of his exes. Whatever those exes have done or whatever their role in the relationship’s end, a man who can’t treat his exes with discretion or respect is unlikely to treat you with either. If you call him out and apologizes and honestly tries to do better, there’s hope.

29. He’s emotionally mature (or working on it).

Like you, this guy is a work in progress. But he should at least be aware of his weaknesses and willing to work on them. If he has zero interest in growing as a person, he’s not ready for a committed relationship. A man who’s determined to improve himself shows he’s willing to be uncomfortable to achieve a greater good.

Is Your Guy the One for You?

Now that you’ve learned how to know if he’s the one, which signs struck you as most accurate about the man you’re dating? Which kept you wondering, “Is that true?”

Some signs are likely to mean more to you than others. For example, you might appreciate honesty more than those who’ve always had honest partners.

But don’t let that one sign eclipse a huge red flag — like a tendency to blame you or others for the fact that his lifestyle isn’t as lavish as he would like.

Ultimately, your intuition is your best asset.