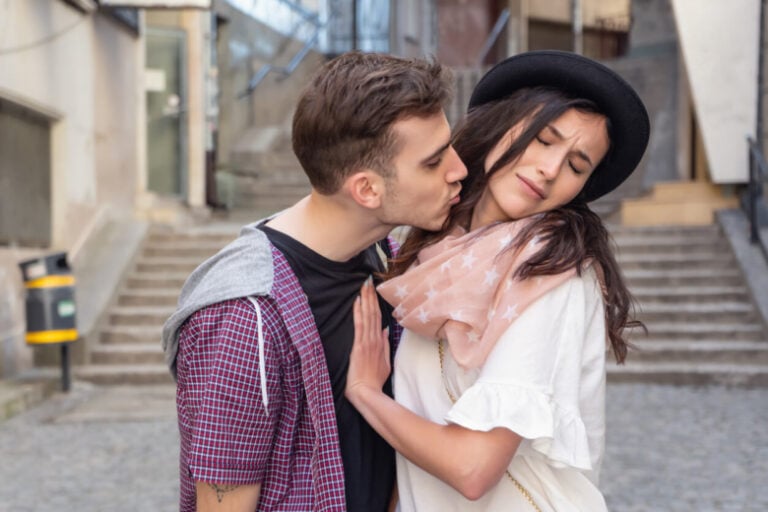 Whether you’re in a relationship or on the market, chances are you exhibit behaviors that are common turn-offs for women.

You might be trying to show off, or perhaps you’re utterly oblivious to the effect your words and actions have on them.

Either way, a basic understanding of what women like and don’t like can make a big difference in your dating life or with your current partner.

Say goodbye to lonely Saturday nights and relationship issues with this list of turn-offs for a girl.

Examples of Common Turn-Offs For Women

Some turn-off examples include:

[Read here about the biggest turn-ons for a woman.]

There isn’t exactly a right or wrong way to act around girls, but some of the biggest turn-offs are described below. Be yourself, but keep in mind that most women don’t like the following:

Women don’t like it when you spend all your time on your phone instead of paying attention to them. Not listening when she talks, regardless of how important it is, makes her feel like you are uninterested in what she has to say and that she doesn’t matter to you.

You don’t need to shower her with attention constantly, but making an effort to show her you care will go a long way.

We’re not talking literal size here. We’re referring to your ego. There’s a difference between confidence (super sexy) and arrogance (not sexy at all).

If you loudly brag about your assets, achievements, qualities, money, etc., to anyone who will listen– and even those who don’t– you may fall into this category.

The same goes for believing you are the best at everything, you’re smarter than everyone you know, and you’re always right.

It’s okay to be proud of your accomplishments, but try to do it without rubbing it in others’ faces.

Whether subtle or outright, derogatory remarks about gender roles are 100% uncalled for. Chauvinistic behavior is disrespectful and immature.

She does not “belong” in the kitchen. It’s okay if she earns more money than you. You don’t even need to beat her at arm wrestling. It’s the 21st century– let’s finally address society’s gender equality issues and move on!

4. Blatantly checking out other women.

Your automatic response here is probably along the lines of “I can look, just not touch.”

Women know you check out other women, and there’s no harm in that–when done respectfully. Even if your significant other says it doesn’t bother her (and it really might not), you can still mind your manners.

Staring at your server’s breasts or flirting with the delivery driver in front of your partner is no good.

5. You don’t take care of yourself.

Women like men who are well-groomed, smell nice and look presentable.

You don’t need to present yourself as something you’re not– but basic personal hygiene is necessary. Brush your teeth, shower regularly, use deodorant.

Wear what makes you comfortable, but toss torn and tattered clothes, and wash dirty ones. Also, find a way to de-wrinkle your clothes. Use a garment steamer, wrinkle release spray, or an old-fashioned iron–whatever prevents you from looking like you slept in what you’re wearing.

A low opinion of yourself and your value is evident to those around you. When you act as if you don’t deserve happiness, let people take advantage of you, and engage in self-deprecation, it’s a turn-off.

Feeling a little nervous or uncertain is normal, but insecurity in every aspect of your life is a problem. There are ways to feel better about yourself and your situation. It’s okay not to be okay– just know how to recognize it and when to seek help.

Some lies are indeed worse than others. But the plain truth is that lying– from pretending to like her new haircut to being dishonest about where you were or who you were with– destroys trust in a relationship.

If you feel like you can’t be yourself around her, then she isn’t the right girl for you. A healthy relationship requires honesty and open communication– and it isn’t hard to just tell the freaking truth.

8. Treating others with disrespect.

Harsh behavior toward or criticisms of other people is unnecessary.

Yelling at the valet attendant or ridiculing the receptionist is rude and immature. Handle mistakes and poor service politely rather than losing your cool.

Making fun of the weather guy’s bushy unibrow, the server’s big nose, or the broadcaster’s speech impediment is also rude and immature. Not all opinions need to be shared.

This, of course, is different than disagreeing about someone else’s beliefs or opinions. Stand up for what you believe in, but do it respectfully and without putting them down. Pointing out others’ perceived flaws or judging them looks weak.

9. The glass is always half empty.

Excessive negativity and pessimism bring people down. Sometimes things indeed suck–but she doesn’t want to hear you complain about everything. When you act as if nothing is good enough, she’s left to assume you feel the same about her.

17 Signs A Girl Is Playing You Like A Fool

Don’t You Hate Feeling Like An Option In Your Relationship? 9 Reasons You Feel This Way And What To Do About It

This can apply to the relationship in general or, more specifically, to bedroom-related activities.

If you’re pushing forward at lightning speed, ready to take things several steps further than she is, you’re probably turning her off– and scaring her away. Letting her know how you feel is great (see #11), but coming on too strong or rushing the relationship is not.

It should go without saying by now, but pressuring her to have sex is never cool. Respect her wishes and let the relationship unfold in a way you’re both comfortable.

One day you can’t get enough of her, and the next, you act like she isn’t even there. Hot and cold behaviors like this are confusing and frustrating.

It’s okay to need space or time to figure out your feelings, but be honest about it. Don’t lead her on or waste either of your time.

Bad manners are immature– and sometimes embarrassing. You should avoid things like belching at the dinner table or farting (at least before you know how she feels about that stuff), talking with food in your mouth, and chewing with your mouth open.

And be sure to say please, thank you, and you’re welcome as appropriate– it’s just common decency.

A man who isn’t ashamed to feel his feelings and appropriately express his emotions is truly a beautiful thing. But there’s a tipping point to being too sensitive. It’s a turn-off when you take everything personally or are offended by everything.

There’s a difference between occasionally spending the day on the couch and a complete lack of ambition. No goals, no hobbies, and no job– with no intentions to look for one– are not great qualities in a partner. You absolutely deserve a little R&R, but take care of life’s basic responsibilities first.

Women like a man they can count on. They don’t like when you don’t call when you say you will, you’re always late, or you constantly cancel plans. Things happen that sometimes prevent you from doing what you said you would do, but let her know what’s up. And don’t make a habit of it.

What Is The Number One Turn-Off for Women?

Women’s opinions on what’s sexy and what isn’t differ as much as the women themselves.

Some personality traits are more desirable to some women than others. Some prefer bookworms; others prefer jocks. Some like a take-charge attitude, while others prefer laid-back guys.

However, if there’s one thing that stands out, it’s selfishness.

If you must always have your way or only do things you want to do, you are most definitely chasing women away. Nobody wants to be around someone unwilling to compromise.

Selfishness can apply in the bedroom, too. Your needs deserve to be satisfied – and so do hers!

Women aren’t all that hard to please– contrary to popular belief.

The point isn’t to change who you are to attract women. You can and absolutely should be real around her–you don’t want to misrepresent who you are as a person. But do it in a way that puts your best foot forward. Avoid these turn-offs for girls to enjoy a successful relationship.