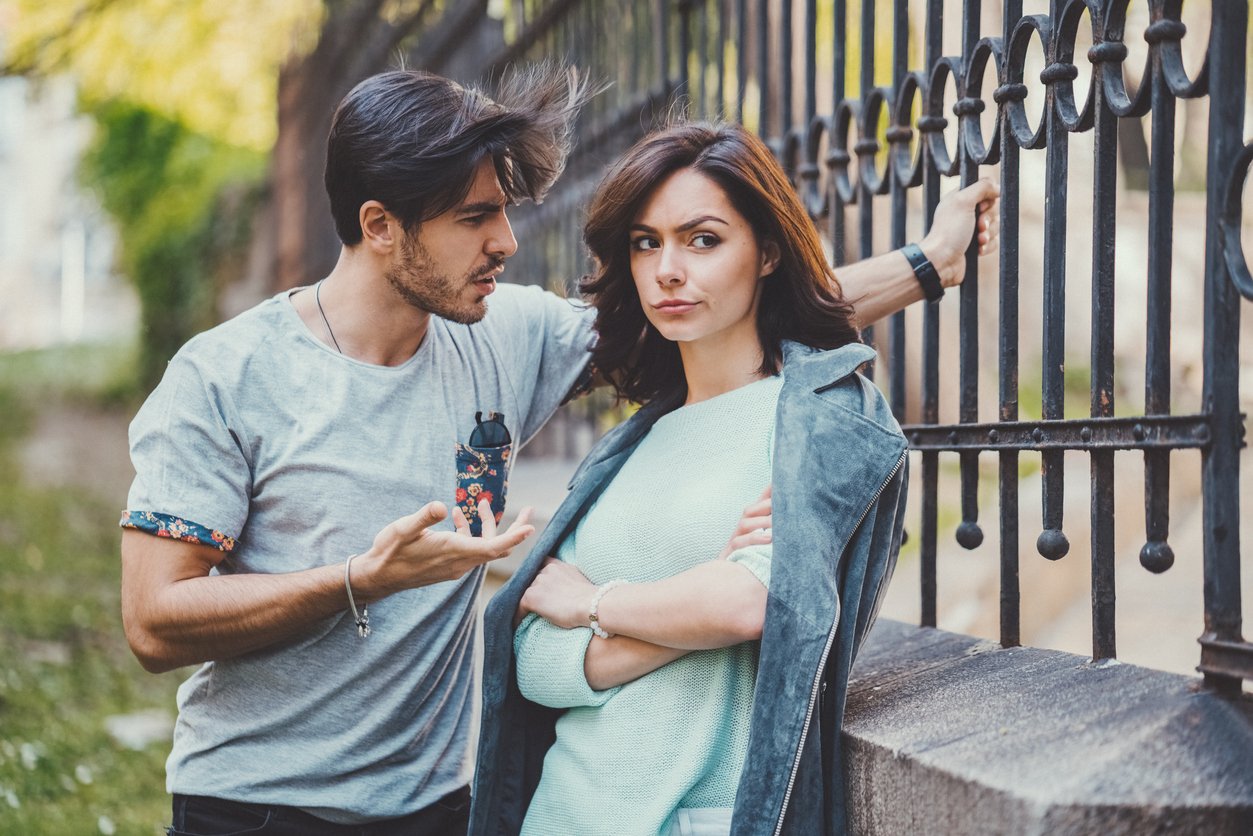 Be honest – how often do you fib or exaggerate details to get out of something, impress someone, or avoid negative consequences?

If you’re like most people, you lie one to two times per day on average!

Lies range from generally harmless to quite manipulative, but the reality is that all lies create mistrust.

This is especially true when being lied to by someone you love.

Knowing why people lie in relationships and signs of deception can help you address and overcome it if it happens to you.

Why Do People Lie in Relationships?

There are endless reasons why people lie in relationships.

Personality, past experience, and even the relationship quality have a lot to do with how honest a person is – and how they react to being lied to.

There’s not a specific set of reasons that people lie, but here are a few possible common ones:

5 Signs of Deception in a Relationship

The Encyclopedia of Deception defines the term as more than a mere difference in opinion or interpretation.

Deception doesn’t require words, either. It’s possible to deceive someone by not saying something.

There’s no universal sign for lying – what one person does while fibbing might just be the way another person behaves typically.

There are, however, some general signs and red flags that can indicate your partner might be lying to you.

Your partner’s speech patterns can indicate they are lying.

Don’t analyze his regular voice, though. Pay attention to changes in it. Speaking higher or lower, louder or quieter, or faster than normal are cues to look for. So are stammering, speaking more deliberately, and frequently pausing while talking.

Changes in your partner’s body language can indicate that something is off.

Turning or walking away from you, unusual fidgeting, or covering his face are signs of lying. People also tend to avoid eye contact, blink frequently, and sweat more than usual while fibbing.

Changes in behavior can indicate that something is off. But keep in mind that other factors can influence changes also–stress, lack of sleep, etc.

If he changes the subject or tries to distract you during conversations, is light on the details, or provides extra information you didn’t ask for–he may be deceiving you.

Even slight inconsistencies in his story or identical recounts of the situation each time (as if rehearsed) can indicate dishonesty.

Pay attention to any changes in his moods and behavior toward you.

What’s it like to be around him? Is he more or less pleasant than usual? Perhaps he is more anxious or unusually calm. Is he showing you more or less affection than normal?

Unexplained moods, showing you more attention, and distancing himself from you are all signs of guilt.

You can’t quite put your finger on it, but his body language, facial expressions, and words just don’t add up.

Tread lightly here – but if you have a gut feeling that something isn’t right, you owe it to yourself to investigate a little further. Ask questions that require him to provide details he’s already shared, and be on the lookout for any of the above signs.

What to Do When Someone Lies to You in a Relationship: 9 Actions to Take Right Away

You’ve caught your partner in a lie. Now what?

Assuming his lie doesn’t make you dismiss him immediately, here are nine actions you can take when dealing with lying in a relationship:

While it doesn’t justify it, taking time to think about the age and severity of the lie can help you better process it. Is it a recent lie, or did he tell his tall tale back when you first started dating? Did he pretend to love your cheesecake, or was he unfaithful?

Try to understand why he felt the need to be dishonest, too. Was it because he loves you and didn’t want you to feel bad about your dry dessert? Was it to cover up his cheating? Or is he a compulsive liar about everything?

Depending on how you discovered his fabrication, hold on to any evidence you have to prove he lied.

Maybe don’t remove the discarded cheesecake from the trash can, but do hold on to the text or email that made you realize he wasn’t really working late. Record conversations with other people and keep track of details that don’t add up.

You are not to blame for his lie – but it might be worth thinking about how you would have responded if he had told you the truth.

Was the lie about something simple because he knew you would disapprove of the truth, and he wanted to avoid criticism? How have you responded to unfavorable information in the past?

That said, even if you have previously responded negatively, it doesn’t excuse his lies. He chooses whether to tell the truth or not–he is responsible for his behavior.

Let yourself experience your feelings and know that sometimes it’s okay not to be okay.

Don’t try to brush it off or change your feelings. Find a healthy way to process your hurt, anger, and betrayal. Journal, meditate, confide in a trusted friend or family member.

Do whatever you need to do to figure out what next steps are right for you.

Decide when, where, and how to talk to him about his lie.

It’s best to do it in a neutral, public location to avoid a big blowup. Don’t make accusations but instead calmly present your case, including the evidence you gathered. Use statements that describe your feelings. “I feel I’m being lied to because…”

Explain that being lied to makes the situation so much worse, but avoid yelling or using foul language.

Allow him to explain his side. He might not think he did anything wrong. He might regret lying. There may be a perfectly reasonable explanation. Beware of excuses, though.

He may try to change the subject, turn the blame around on you, or stall to avoid having an uncomfortable conversation.

Stand firm, and don’t get defensive or let him distract you. If he claims it’s your fault or insults you, simply let him speak and then respond by resuming your conversation. If his concerns are legitimate, you can discuss them another time, but don’t let him change the dynamic of this conversation.

You have a right to be upset, but try to see it from his perspective.

Again, it doesn’t justify his lies, but understanding the big picture can help you decide the best way to move forward. It can also keep you calm and in control of your emotions.

8. Resist obsessing about it

Being lied to by someone you love can make you paranoid and believe he is lying about everything.

It can tempt you to question and cross-check everything he says and does, snoop through his phone, email, and personal belongings, and ultimately drive you crazy.

Refrain from doing this to preserve your sanity–and any integrity remaining in your relationship.

9. Reexamine your position on the relationship

After your discussion, take time to reevaluate how you feel about your partner and the relationship moving forward.

Did he own his mistake, or is he sticking to his original story? Did he show remorse? Do you believe he will continue lying, or you won’t be able to trust him?

If you decide to end the relationship, respect both your time and feelings. Be open and honest, and don’t drag it out. Explain your trust has been broken, and you don’t see yourself trusting him again. You don’t owe him anything–no need to keep hashing it out or listening to his excuses.

What to Do When Your Boyfriend Lies To Your Face

If you’ve ever caught someone lying to your face, you know how bad it can sting. Here are some tips you can use to deal with it in the moment.

How to Get Over Someone Lying to You

The effects of lying in a relationship depend on the people in the relationship–only you know your threshold for dishonesty.

It’s not fast or easy, but it is possible to get over it.

Use these tips to move past the lies:

Lying in a relationship is hard to deal with. Most lies are harmless and meant to avoid negative consequences rather than intentionally hurt you, but a partner who continues to deceive you is not worth your time or affection.

Stay true to yourself when deciding whether this is the right relationship for you or if it’s time to say goodbye.