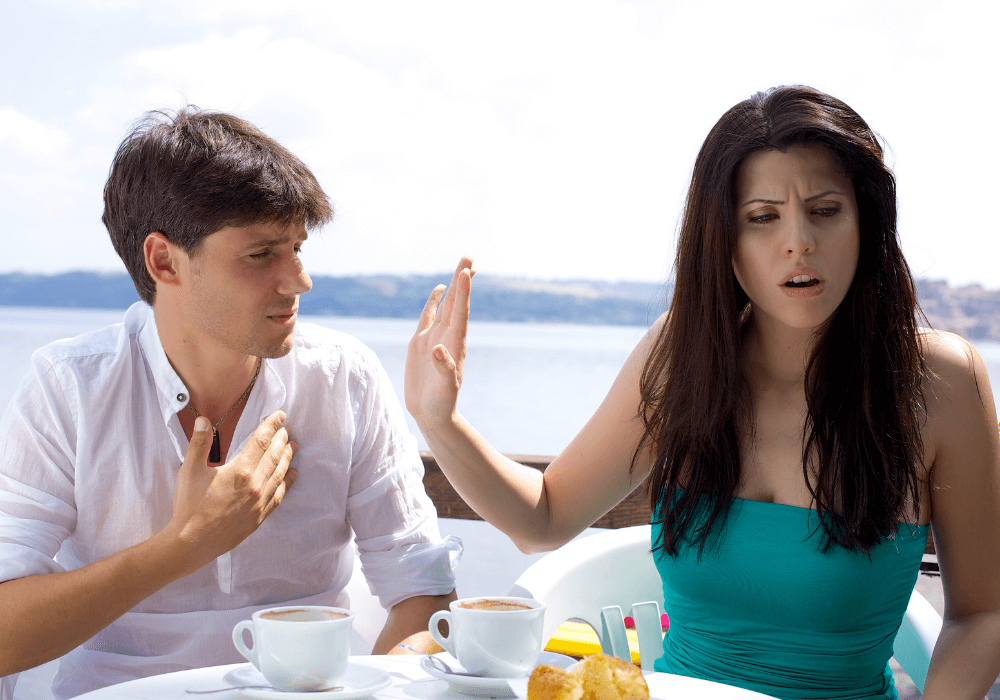 When a relationship is brand new, you sometimes ignore red flags because you are so excited to fall in love.

Mutual respect is a vital part of a healthy relationship.

Every couple will have their fair share of disagreements, but don’t excuse disrespectful behavior.

Maybe you’ve started to notice some recurring disrespectful behavior from your boyfriend after being together for a while.

The signs of disrespect in a relationship can be challenging to spot at first, but they were always there.

What Does It Mean When a Man Disrespects You?

You’re not the only woman out there asking yourself, “Why is my boyfriend so rude to me?” or “What have I done to deserve this treatment?” You might feel like it’s your fault if your partner frequently disrespects you, but it isn’t.

It can be very upsetting and confusing to be on the receiving end of disrespectful behavior.

With that said, these reasons may help you better understand where it stems from:

11 Signs Of Disrespect From a Man

A disrespectful relationship is more likely to become abusive and damaging to your mental health. Being in a partnership where there isn’t a level of mutual respect will slowly wear you down and make you feel unsupported and worthless.

When a man shows you his true colors, believe him. The following are common signs of disrespect you should never put up with from a man.

1. He frequently resorts to yelling.

A man who is quick to raise his voice at you demonstrates that he is incapable of resolving disagreements without disrespecting you in the process.

If you find that he frequently resorts to yelling during arguments, that is a behavior you should not tolerate. A partner who respects you should communicate their concerns in a calm manner.

If they can’t, that shows a complete lack of respect and potential anger issues bubbling at the surface.

2. He doesn’t pay attention when you talk to him.

A more subtle sign of a disrespectful boyfriend is that you often find yourself nagging just to get him to pay attention when you talk.

Instead of giving you his undivided attention, you might look up to find him scrolling on his phone or staring at you with a blank expression on his face.

Maybe you just arrived home after a long day at work and want to vent your frustrations to him, but he seems like he’s in another world.

3. He makes fun of your aspirations.

If you feel embarrassed to share your goals with your boyfriend, ask yourself why. Your partner is supposed to be your biggest supporter. Even if they don’t fully understand or relate to your aspirations, they should be your biggest cheerleader.

Disrespectful men might make fun of your dreams in an attempt to tear down your confidence. They’ll make you feel judged instead of loved and supported.

4. He makes you feel inferior to him

If your boyfriend often makes snarky or unhelpful suggestions whenever you need help with something, that is blatant disrespect.

A partner is someone you should lean on and ask for help, but maybe yours makes you feel dumb every time you ask.

He feels superior to you, so he wants to put you in your place by making sure you never feel like a true equal.

5. He shows a lack of commitment.

A disrespectful boyfriend with behaviors that indicate his lack of commitment is disrespectful. Whenever you argue, he seems uninterested in coming up with a solution. He may flirt with other women in your presence and act like it’s totally normal.

6. He talks down to you in front of others.

Do you feel a sense of dread before going out together because you’re worried he’s going to embarrass you in front of others? If so, your partner is probably a disrespectful boyfriend.

He might talk to you condescendingly in front of his friends or say things purposely to make you feel ashamed or inferior. A good partner will show you respect both in private and in public.

7. He is never the first to apologize

If you find that you’re always the first one to say “I’m sorry” after a fight, your boyfriend is disrespecting you. Maybe he never apologizes at all, even when he’s in the wrong, and you are right.

This behavior is a sure sign of disrespect that you should not ignore. By refusing to apologize, he is showing you that he believes he is never wrong and that you will have to take the blame for any problems that arise.

21 Disrespectful Husband Quotes To Reinforce What You Should Never Tolerate

8. He makes excuses for his actions

Disrespectful men will find all kinds of ways to excuse their actions. By avoiding accountability for his behavior, he can avoid the consequences.

This is disrespectful to you because it shows that he has no intention of sticking to his word and will just come up with an excuse. It also shows that he doesn’t care if his actions hurt you because he will find some reason to explain it away so that it isn’t his fault.

9. He gets angry when you want to have alone time

If your boyfriend objects to you spending time without him, that could mean that he doesn’t trust you. This common tactic that men use is a way to keep tabs on what you’re up to.

In a healthy relationship, you should feel free to spend time apart without it causing an argument. If your man gets angry just at the thought of you having some alone time, don’t ignore that sign of disrespect.

10. He only wants to talk about himself

A man who disrespects a woman will only want to talk about himself. He values himself and his own achievements above yours.

Every conversation you have will center around his ideas, and if you try to change the subject of the discussion, he’ll find a way to steer it right back to himself.

This self-centered attitude can get tiring and is behavior that you need to nip in the bud quickly.

11. He doesn’t keep his promises

Another common disrespectful trait in men is when they do not keep their word to you. They frequently make promises to you but make no effort to follow through.

Maybe your boyfriend promises that he will come to visit but changes his mind and cancels at the last minute. You’re constantly disappointed because you know that you cannot depend on him. It erodes the trust in the relationship over time.

What to Say to a Disrespectful Man

When it comes to a disrespectful partner, you need to have a conversation about it. Stand up for yourself and make sure he understands that you will not tolerate his behavior.

Even though it can be tempting to give him a taste of his own medicine, take a deep breath and try to handle the situation calmly.

Maybe you’re thinking, “My boyfriend talks to me rudely, and I don’t know what to say to him!” The following are things you can say to a disrespectful man to help diffuse the situation:

Some men will never change their ways, so maybe you should cut him off if he disrespects you. You know your relationship best, and only you can make that decision.

Having a disrespectful partner doesn’t necessarily mean your relationship is doomed. If your boyfriend is open to listening to what you have to say and wants to correct his behavior, then your partnership stands a chance.

It is a good sign if he appears to be remorseful and understands what he did wrong.

It will not be an easy road, but mutual respect can be re-built by setting firm boundaries, holding him accountable, and giving your relationship time to heal.

1 thought on “Is He Throwing You Shade? 11 Signs of Disrespect From A Man You Should Never Put Up With”