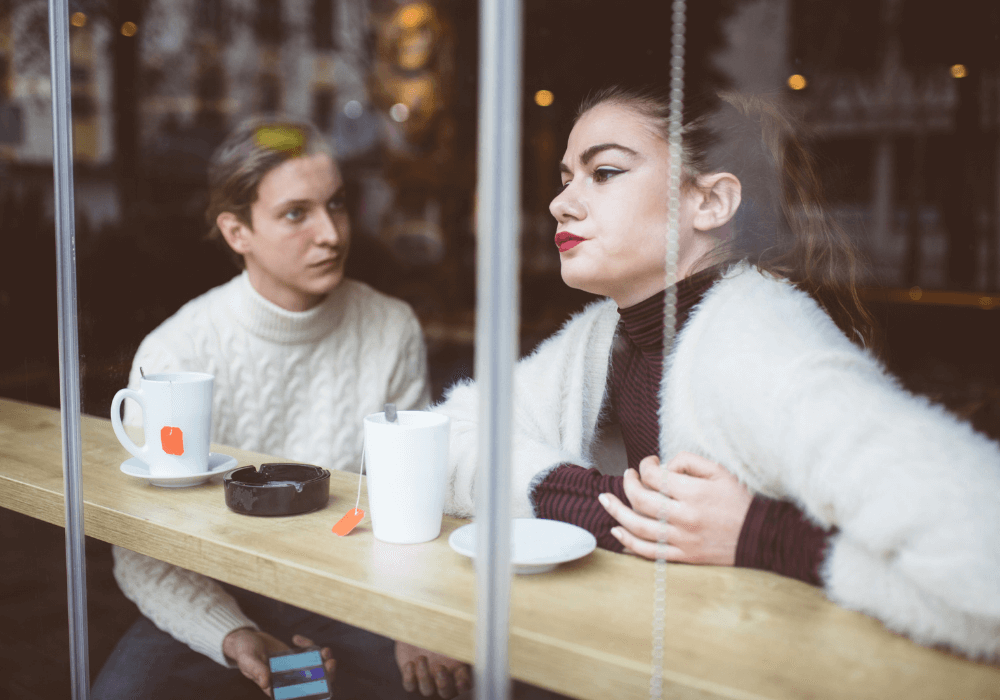 Either you know someone whose behavior strikes you as cold, or you’ve become aware that people around you see you as a cold person.

Maybe you’ve even asked yourself, “Why am I so cold-hearted?” or “Why am I numb when I should feel something?”

Whatever past trauma you may still be processing, you wonder if you’re missing something about yourself.

While some may be content to dismiss you as cold, you want to believe there’s more to you than that.

What is a Cold-Hearted Person?

A cold-hearted person does not allow themselves to connect emotionally with others, either because they’re afraid or simply not interested.

What are the signs of a cold-hearted person? Not all who come across as cold are alike.

Those who are truly cold-hearted, though, exhibit many of the following traits.

They keep themselves apart from others. It’s not necessarily because they dislike people, but they find it more difficult than most to be congenial or engaging.

And if the coldness is soul-deep, they don’t feel enough interest in other people to justify showing any.

They isolate themselves to avoid those who might want to get to know them.

2. They find it difficult to empathize with others.

They’re more likely to see others as oversensitive or to accuse them of overreacting.

If they see someone in emotional distress, they’re more likely to leave the scene as quickly as possible to avoid what they consider a “humiliating display.”

The last thing they’re likely to do is to show empathy for someone in pain.

3. They keep people at arm’s length.

Cold-hearted people don’t let anyone close enough to get to know them, so keeping people at arm’s length is their default, and they’ve learned a variety of ways to do this.

They’ll deflect or change the subject when you ask them about themselves.

It’ll take more than friendly overtures and genuine empathy to thaw the ice.

4. They act superior or above-it-all.

It’s easier to keep people at a safe distance if you believe in your inherent superiority — and vice-versa.

So, the cold-hearted person will act as if your life and your concerns are beneath them, likely because they genuinely believe they are.

By floating above the concerns of the hoi polloi, they reinforce that feeling of superiority.

They are their own main focus. So, they’ll often appear self-centered or self-absorbed.

Try to talk to them about a concern of yours, and they’ll likely interrupt or use any opening to hijack the conversation and make it about them.

They’ll also resist your attempts to steer them back to the original topic, which has nothing to do with them.

They don’t feel compelled to keep secrets if they think they might benefit more from sharing them.

And they won’t honor commitments (to meet, share the bill, to pay their debts) if it doesn’t serve their interests.

Given a chance, they’ll pass unwanted burdens to others and claim all possible benefits for themselves.

7. They’re slow to trust others.

They’re not in the habit of trusting other people — even those whose trustworthiness is beyond dispute.

Whatever your virtues as a friend, they won’t trust you to the point of leaving themselves vulnerable to betrayal.

To a cold-hearted person, only a fool puts their complete trust in another person.

They don’t like to ask for help, and they resist the whole idea of interdependence. They value independence and self-sufficiency.

Cold-hearted people don’t want to depend on others because they expect to be disappointed or even betrayed.

As far as possible, they’ll safeguard their own interests without relying on others.

They’re more likely to blame you or other people for whatever you might hold against them.

They see those who apologize as “weak” or submissive, and they see dominance as critical to their identity and success.

Remorse is another feeling they attribute to weakness, and they consider themselves immune.

They insist on being the ones in control of their own lives, and they’ll go to extremes to extricate themselves from the control of others, even those who care about them.

They’ll resist every attempt to steer them in a direction they don’t want to go, even if it means making regrettable choices.

They can always blame the consequences on anyone but themselves.

11. They interrupt or talk over others.

What you’re saying can’t possibly be as important as what they want to say, and they won’t waste time waiting for you to finish.

They’ll interrupt and often discount something you’ve said before taking the conversation in a direction that interests them more.

If you continue talking, so will they, eager to prove their will is stronger.

12. They’re more likely to betray others.

If betraying another gets them closer to something they want more than that person’s trust, they won’t hesitate to put themselves first.

Just as they don’t trust others, they don’t see a point in building trust unless it serves them in some way.

And the motivation to do so typically dies once they’ve got what they want.

13. They’ll hurt or humiliate others if it serves them.

They’ll say or do things to hurt or humiliate others, even publicly, if it suits them. And they’re unlikely to lose sleep over it unless some unforeseen consequence threatens them in some way.

Generally speaking, someone else’s humiliation and pain are more likely to entertain than to trouble them. It might even be a welcome distraction from other concerns.

Are You Socially Inept? 25 Of The Best Ways To Know For Sure

They’ll avoid unpleasant emotions as much as possible, and remorse is one of their least favorite. Their goal is to anesthetize themselves to the pain those beneath them experience to remain “above it all.”

It doesn’t occur to them that avoiding negative emotions at all costs compromises their ability to experience positive ones.

If they feel constrained by a relationship, they’re more likely to break up to reclaim their freedom.

And after the break-up, they’ll move on with relative ease while their ex struggles to understand why they ended things.

Meanwhile, their post-break-up behavior only confirms others’ perception of their coldness.

They’ll usually avoid these, anyway, since they find them uncomfortable or boring. They definitely prefer to avoid talking about them.

And if someone cajoles them into watching a sappy romance with them, they’ll be dry-eyed and bored when the storyline moves others to tears.

They might even openly criticize elements of the story, marring the experience for other viewers.

17. They’re quick to leave you out in the cold.

That connection you thought you had with them? It’s not enough to stop them from dropping you abruptly and distancing themselves.

It’s often precisely because you feel closer to them that they push you away. Your attachment to them is a threat.

They’re more interested in protecting themselves than in building a real relationship.

18. They can be manipulative.

Cold-hearted people are often comfortable manipulating others to serve their own ends. If they can use guilt to get you to do something for them, they will. Otherwise, they might exploit your apparent interest in being their friend.

You are a means to an end — not an equal in any sense that has meaning for them.

19. They can be destructive.

The cold-hearted person has zero qualms about destroying relationships because they don’t expect them to last, anyway, or lead to anything they want. The sooner a relationship ends, the sooner they can move on to something else.

The thought of a relationship lasting for years feels more like a prison than a refuge.

They’re not interested in a “forever love.” They’re more likely to break off a relationship when their partners show an inclination to create a deeper connection with them.

Public displays of (genuine) affection are for couples who are so in love they can’t help showing it. The cold-hearted person is unlikely to allow themselves to fall head over heels or to allow anyone to have that kind of control over them.

Unless a public display of affection serves their interests somehow, they’re unlikely to encourage it.

22. They don’t know what to say during painful events.

In addition to being emotionally unavailable, a cold person is clueless when it comes to knowing what to say or how to behave when you or someone else is in pain.

Your grief or sadness makes them not just uncomfortable but sometimes angry. How could you dare ruin their day with your problems?

But even when they are forced to be in a grief setting (i.e., a funeral), they’re at a loss for words. They stand around, looking at their phones until they can find an exit ramp.

23. They are cynical and callous.

Can you say, “Machiavelli,” boys and girls? Like the cunning philosopher known for his immorality and political scheming, a cold-hearted person believes the ends always justify the means.

Their cynicism permits them to undermine respected norms and values. They don’t waste time on guilt or regret. They want what they want, and they’ll step on toes, bend the rules, or breaks some hearts to get it.

Often, they work in the background, pulling strings and manipulating rather than being overt in their destructive behaviors.

How Do You Treat a Cold-Hearted Person?

It bears repeating that not all who come across as cold or detached are cold-hearted; some are simply closed-off because life has taught them the cost of being vulnerable is too high.

And some have a personality that isn’t as warm or empathetic as what you’re used to.

But their apparent coldness doesn’t make them antagonistic, devious, or controlling.

That said, if you know someone who exhibits all the traits described above, here are a few tips for dealing with them:

What Is Cold Behavior?

This question deserves a comprehensive answer. One person’s apparent coldness may have more to do with their personality or autistic traits than to any ill-will toward other people.

Another person’s coldness is palpable and unsettling. The distrust is instantly mutual, and you quickly learn to be on your guard around them.

Whether you know a cold person or you suspect others perceive you as “cold-hearted,” get your thoughts down in a journal — today, if possible.

People are more than what they seem. And that includes you.