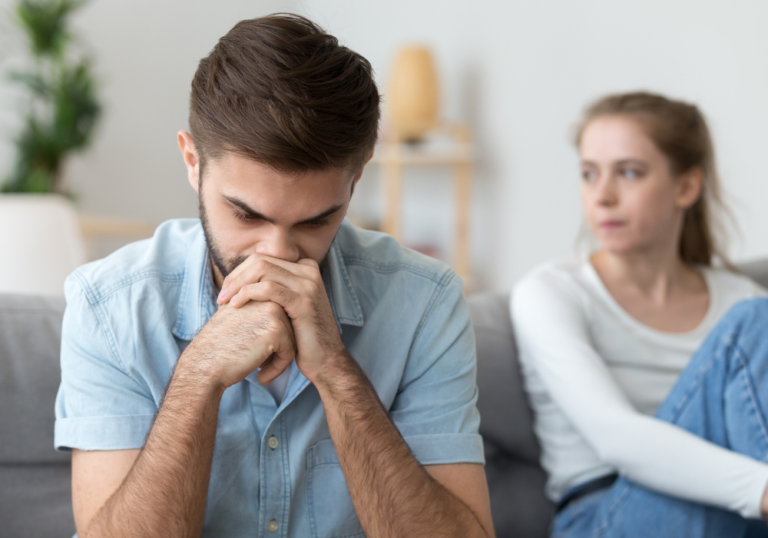 You met a guy, and things were going great for a while.

He made you laugh, you had plenty in common, and it seemed like he understood you.

You’re not sure if it’s in your head, but it feels like he isn’t as into you as he once was.

This list will help with how to tell if a guy is losing interest or if you’re overthinking it.

Is He Being Distant, or Am I Overthinking?

Is he losing interest, or are you making more of the situation in your head?

It’s easy to read too much into a situation and misinterpret his signals.

Here are some signs he’s still into you, and you are overthinking his actions or the situation:

Relationships are tough. You think you want to make it work with this guy, but you don’t want to waste your time with someone who doesn’t realize how amazing you are.

You know you deserve to be with someone who really wants to be with you, too.

If you’re unsure if he’s losing interest, consider these signs:

1. You spend little time together.

Just as it’s natural to want to spend a ton of time together when the relationship is new, it’s also normal to spend less time together as the novelty wanes.

Life is busy and can get in the way. But not spending enough time together can be a sign of trouble.

Are you asking yourself, is he really busy or avoiding me?

If so, consider the quality of the time you are together to determine if he’s still interested.

2. He avoids talking about the future.

It’s not uncommon to take things slowly when you’ve just met. Sometimes it’s wise to refrain from making plans for months down the road or labeling a new relationship until you have a better idea of where things are going.

But what if you’ve been together for a while, and he’s had no problem talking about the future previously?

Now he’s suddenly avoiding the topic without a good reason.

3. He’s less responsive to your texts and phone calls.

You used to text constantly or talk on the phone for hours, but lately, something is different.

Signs a guy is losing interest through text include taking a long time to respond, being unavailable to chat, and a lack of enthusiasm when you do talk.

Do you notice that he has time to post on social media but isn’t getting back to you? Are his answers short with little room for follow-up conversation? It could indicate he’s losing interest.

4. There’s a lack of physical intimacy.

Every relationship is unique. It doesn’t have to mean sex per se, but physical contact is required in relationships to form a bond, whether sex, kissing, holding hands, or cuddling on the couch while watching Netflix.

Suppose you previously experienced frequent physical intimacy, but now you can’t remember the last time he touched you, or he seems to avoid physical contact at all costs. In that case, it’s a pretty clear sign his interest has declined.

Intimacy is undoubtedly vital in relationships. But it should not be the sole foundation of one, at least not a committed one.

If you used to go out but now all you do when you’re together is have sex, it could signify an unhealthy relationship. It’s one in which there’s no emotional connection but instead simply a way to have his physical needs met.

Sometimes life happens, and plans get canceled. Additionally, it’s not healthy to spend every waking moment together.

You should maintain your individuality to avoid losing yourself in your relationship.

But if he puts everything before you (work, friends, etc.) or often bails on you (especially in favor of hanging out with friends), it could be a sign that you are no longer a priority, and he’s losing interest.

Is he always busy when you suggest getting together? Does he avoid telling you what he’s up to, who he’s with, or when he’s available? These are clear signs that something is wrong.

Again, it’s okay not to spend all your free time together. It’s also okay not to share every detail about your lives– a little mystery can be a good thing.

But for a relationship to work, you must spend at least some time together. And being mysterious is quite different than being secretive!

8. The sizzle has fizzled.

When you first started dating, you felt a spark between you – butterflies in your stomach, excitement at the mention of his name, an ear-to-ear smile when you’re together.

But lately, something feels off. It feels less like a romantic partnership and more like a boring friendship.

While relationships have ups and downs, especially as the newness wears off, a complete lack of connection can indicate he’s lost interest, and this isn’t the right relationship for you.

21 Examples Of Healthy Boundaries In Relationships\

Are You A Woman Attracted To Another Woman? 7 Signs It’s More Than A Friendship

9. He doesn’t ask as many questions.

Asking questions is how you get to know each other. It’s one way to show interest and that you care.

It could indicate a waning of interest if he used to ask questions about your job, your family, your plans for the weekend, or just you in general, but lately, he keeps to himself, and he doesn’t seem to care about what’s going on in your life.

Previously, he was sweet, caring, and friendly. He answered your questions openly and was happy to tell you about the things going on in his life.

More recently, though, he seems annoyed with you and is defensive when you ask innocent questions about his plans or his life.

This behavior could indicate he’s going through something personally and doesn’t want to talk about it, or it could mean he’s not as into you as he once was.

11. His effort has declined.

He used to put energy into planning your dates, impressing you, or making you feel good. He used to go the extra mile, perhaps with romantic gestures to make your time together special.

Now, however, he puts little or no effort into your relationship. He doesn’t ask about your day or initiate making plans with you. It’s almost as if you’re mere acquaintances or casual friends at best.

12. He flirts with other women.

There’s a fine line between friendliness toward others and flat-out flirting with them. And flirting with other women when he’s in a relationship is never okay.

Whether he’s done it from the beginning of your relationship or started recently, you can take this as a clear sign that he doesn’t value you or respect you and therefore isn’t as interested in you as you want and need him to be.

You don’t by any means need his permission to pursue your goals.

But it’s important that he cares and supports the things you care about and the things that are important to you, whether personal or professional, big or small.

If you find that he doesn’t support your dreams, goals, accomplishments, or plans for the future, it indicates that he isn’t in it for the long haul.

14. He badmouths or avoids your friends and family.

Your friends and family are an important part of your life, and you want your significant other to care about them, too.

He doesn’t have to love everything about everyone in your life or want to meet all of them right from the beginning.

But insulting those who are important to you or refusing to meet them can indicate a lack of interest in a long-term relationship with you.

You didn’t always agree on everything, but you generally used to get along quite well. You laughed and joked and always had a great time together.

But now, nearly everything seems to lead to an argument. He complains a lot, finds fault in even small things, and just makes being together difficult.

He might even seem to pick fights or purposely bring up topics that generate disagreements.

16. He doesn’t notice you anymore.

Frankly, men aren’t always great at noticing small things like a slightly different hairstyle or a sweet gesture you’ve made.

But there’s a difference between being unobservant and completely oblivious. If he doesn’t acknowledge bigger things like a drastic change to your appearance or lifestyle, he may purposely avoid it because he’s checked out of your relationship.

Another sign is if his previously frequent compliments toward you have died off or are no longer existent.

17. You have an unshakeable feeling.

Call it intuition, call it a gut feeling, call it a knowingness within you.

Whatever you call it, sometimes you just know when something isn’t right.

If you have an unshakeable feeling that he’s losing interest, it’s probably a good idea to address it now. Do it before you invest more of your time and energy into something that will inevitably end.

Trust yourself and be honest about your feelings.

Not knowing where a relationship is going takes up a lot of head space and can drive you crazy if you let it.

The bottom line is if you think he’s losing interest in you, the best thing to do is just ask him without being confrontational.

Explain that you don’t want either of you to waste your time on a relationship that isn’t going anywhere because you both deserve to be happy. Either way, the truth shall set you free!