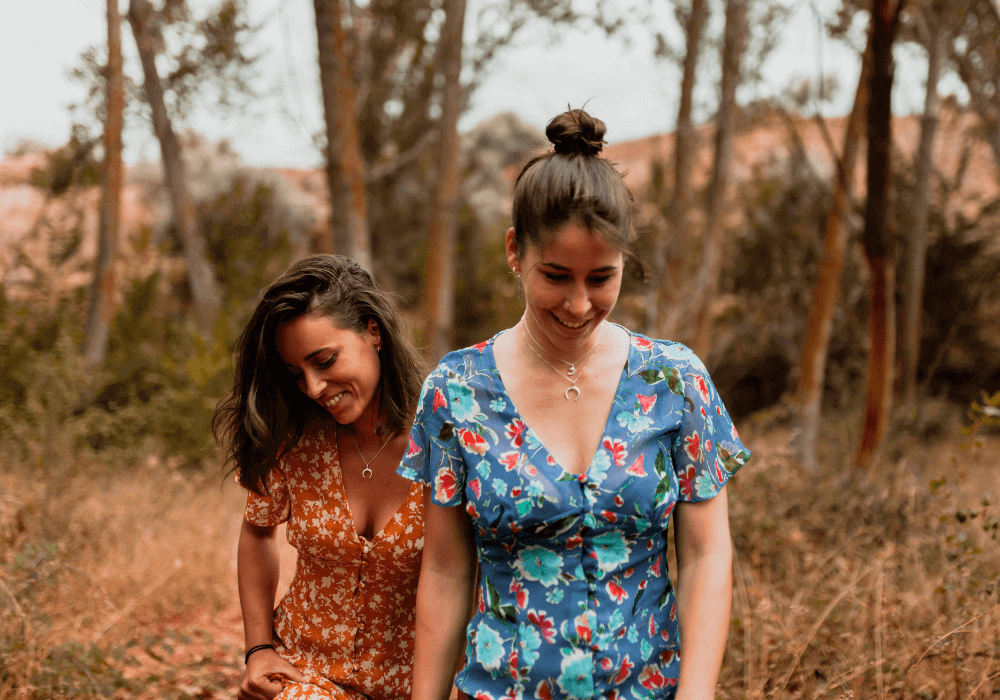 What makes a woman attractive to a woman?

And how can you know for sure if a woman you know is attracted to you?

Whether you feel the same or not isn’t the issue here.

Once you know how to tell if a woman is attracted to another woman, it’s up to you to decide what to do if you pick up the signs in a woman you know.

Let’s start by answering some questions you might have.

Can A Straight Woman Be Attracted to Another Woman?

Is it possible for a straight woman to be attracted to another woman? Short answer: Yes. Longer answer: It’s complicated.

First of all, it’s important to note the different types of attraction. Sexual and romantic attraction are the most talked about, but there are other ways to experience attraction.

A straight woman may experience strong aesthetic, emotional, platonic, or sensual attraction to another woman.

These types of attraction can even be confused for romantic or sexual attraction.

Second, a woman can realize that she’s not straight at any point in her life. So, even if she identifies as straight, she may begin to develop romantic feelings for another woman.

And, turns out, female-to-female attraction signs aren’t so different from the signs you’d see in a woman who’s crushing hard on a guy.

That said, what should you look for?

What Attracts A Woman to Another Woman? 7 Signs You Need to Know

If the woman you’re thinking of is exhibiting more than one of the following signs, chances are, those signals are a strong indicator of her preference for your company.

It might help, too, to ask yourself, “What would I think if she were acting the same way toward a guy?”

1. She ventures closer to you.

Given a chance and an excuse that sounds innocent enough, she’ll sit right next to you—at a table, on the couch, at the movies, or anywhere you might be.

Of course, if she’s in another relationship, she may not feel free to do this, especially when her significant other is around. Or maybe she’ll stay in proximity to you without realizing it.

She doesn’t feel the need for a space cushion between you. And as long as it doesn’t freak you out, she’s happy to sit as close to you as you’ll allow.

She’s even happier if you take the initiative and sit close to her. In fact, any time you sit or stand closer to her, she feels a surge of warmth you can often see on her face, even when she’d rather keep her feelings for you secret.

If she’s into you, she probably won’t be subtle about it (for long).

2. She uses any excuse to spend time with you.

She wants to be where you are. And if she can think of a good excuse to visit or join you on an errand or invite you over to her place, she will.

Then, once you two have arranged a meeting, she’ll spend whatever time leads up to it wringing her hands, mentally rehearsing everything she said to you, and curling up with a soothing drink (when she’s not pacing and scolding herself).

Once she’s with you, though, she’s happy again. And, if possible, she wants you all to herself. If someone else is there, and if her schedule allows, she’ll stay until your other company leaves. Then she’ll relish the time she has alone with you.

3. She’ll use any excuse to text or message you.

Any text or email from you, and she’s instantly awake, alert, and scouring the message for subtext. She’ll laugh at herself later (through tears), but for now, she’s walking on air.

She’ll read the text, absorb it, roll it around in her head for a bit, and then sketch out some ideas for a reply. She’ll agonize over the best response and the best possible phrasing for it.

But eventually, after sketching out some ideas and choosing the least problematic, she’ll leave her response and hope for an encouraging rejoinder from you–at least if her response contained a question.

She also loves it when you give her a reason to message you (It really doesn’t take much).

When it comes to you, she’s always ready for hugs and gentle touches to the arm, shoulder, or back. She’ll even let you touch her hair. It may even seem as though she’s leaning in, hoping for some kind of touch from you.

If she’s less receptive to touch with other people, this is a strong sign that she feels closer to you than to most. She craves that connection with you above all. Offer your hand, and she’ll take it. Offer your arms, and she’ll walk right into them.

And if she feels at home there, she’ll only let go when she feels you pulling back. You can feel it in her hugs, too. She might seem hesitant at first, but once you’re hugging, she’ll melt into it. She’ll linger as long as you’ll allow it—unless she feels suspicious eyes upon her.

And if she leans in for a kiss or actually lands one, well — game over. You know for sure she sees you as a potential romantic partner.

5. She seems deflated when you talk about someone else

If there’s even a chance you might have romantic feelings toward someone who isn’t her, she’ll look for the signs. And if she sees them—or thinks she sees them—she’s likely to seem a bit subdued or even depressed.

On the other hand, if she picks up the slightest sign that you prefer her company, she’ll bloom. It’s not that she doesn’t see herself as worthy of someone like you (though she might). But she wants to be your number one.

The plain truth of it is you’re the only one in the world (other than herself) whose perception of her matters. If she’s got your attention and your smiles, she has hope.

6. She goes back and forth between being subtle and being more overt.

The agony is real. Everyone acts like an idiot when they’re in love—at least sometimes.

She knows what she’s feeling, but she’s not sure you feel the same way toward her. After all, she probably thinks you could have your pick of younger, smarter, and hotter women.

So, if you’re picking up on her interest in you, she imagines you thinking, “Oh, uh… This is awkward, but I’m kinda interested in someone else. I thought we were just friends.”

Cue the hyperventilating and string of profanities.

If she’s feeling brave (or just really wants to feel that way), she might even ask you out. After all, since you’re both women, she’s less likely to wait for you to make the first move.

If she asks, you’re the only one invited—no one competing with her for your attention. And if she gets a “Yes” from you, she’ll go all out to make your time together as enjoyable as possible.

She’ll want to spoil you. She’ll want to make sure you get the hint that you’re worth all the trouble she’s gone to to make your date memorable. She aims for an experience you’ll want to repeat.

Because, to her, this is only the beginning.

Now that you’ve read through all seven signs of a woman attracted to another woman, which ones stood out for you? And what will you do differently this week?