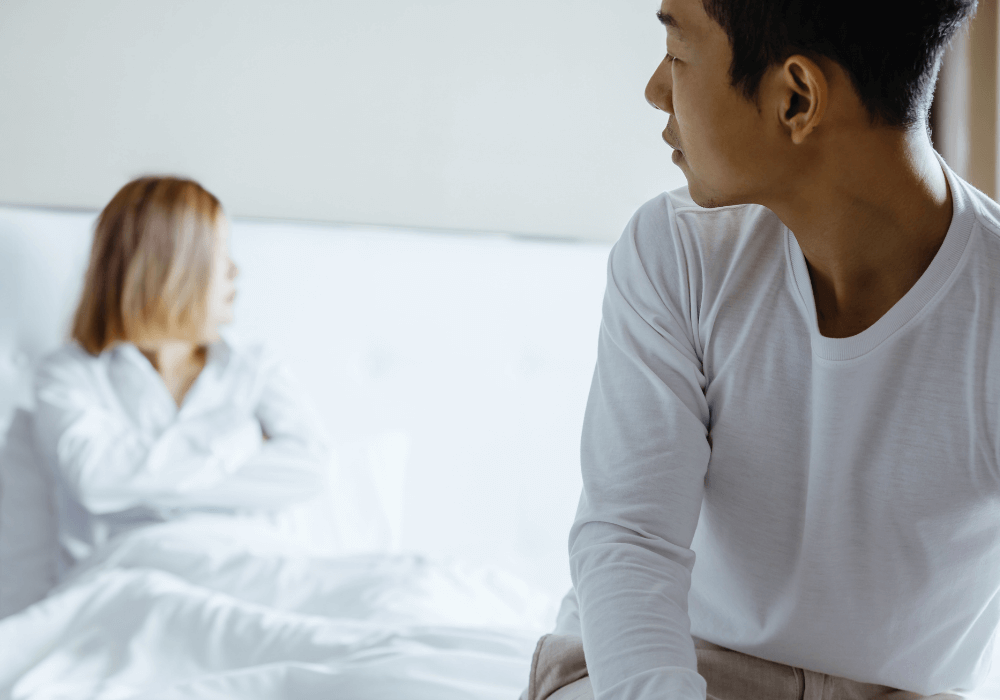 When a relationship is new, there is no shortage of passion and sexual tension.

Over time, as the initial excitement fades, you might notice you are having sex with your boyfriend less often.

This change is normal and to be expected.

However, there is likely a problem if you frequently find yourself thinking, “He doesn’t touch me sexually anymore!”

If your boyfriend is always disinterested or even completely avoids sex with you, that is something you need to address.

Why My Boyfriend Doesn’t Want Me Sexually

You might feel like your relationship is doomed if your boyfriend doesn’t want you sexually anymore, but that isn’t true.

There are so many factors that contribute to a decreased sex drive, and none of them are necessarily your fault.

The following are possible reasons why your boyfriend has lost interest in your sex life:

How Do I Tell My Boyfriend That I Don’t Feel Wanted?

Sexual satisfaction plays a vital part in a healthy and happy relationship. If you consistently feel unwanted and it’s damaging your confidence, it’s time to take action.

So, here’s what to do when you don’t feel desired by your boyfriend.

The best way to tell him is at a time when you’re both relaxed, and he doesn’t have a lot on his plate. You absolutely don’t want to bring this up directly before or during an intimate moment. That’s a sure way to kill the mood!

Instead, broach the topic in a neutral setting. Be honest about your feelings and give specific examples.

For example, has he been rejecting all of your advances lately? Have you noticed he rarely touches you, but you catch him staring at other women?

Make sure your boyfriend knows you still love him, but you are unsatisfied sexually and want to solve the problem together. Stay calm and allow him time to express his concerns as well.

Before taking out your frustrations on him, consider these possible reasons why your boyfriend has lost interest.

1. He is overly stressed from work.

Don’t underestimate how much external stress can have on your man’s sex drive. Perhaps he received a new promotion or has been putting in extra hours at work.

He probably doesn’t have much energy left for sex if this is the case. When he gets home at the end of the day, all he wants is to put his feet up and relax on the couch. It’s nothing personal, so give him time to adjust to his new workload.

2. He is suffering from a mental health issue.

Has your boyfriend seemed unlike himself lately? Maybe you’ve noticed he has been withdrawn emotionally as well as sexually.

If so, he might be suffering from anxiety or depression, which can put a huge damper on his desire for you. Untreated mental health issues can cause a strain in your relationship, so encourage him to visit a doctor to get the help he needs.

3. He is unhappy with the state of your relationship.

When the two of you have unresolved issues, your boyfriend will likely avoid sex with you because he feels unsatisfied with your relationship.

It’s difficult for him to get turned on when he is questioning whether or not you two will even last. If you notice a sudden decrease in sex, maybe bigger issues in your relationship need to be worked on.

4. He has performance anxiety.

Maybe your boyfriend feels like he’s unable to please you. Believe it or not, this can significantly affect a man’s desire to have sex. He might think you’re only having sex with him out of obligation and aren’t truly enjoying yourself.

He wants to avoid disappointing you as the woman he loves. It’s easier for him to avoid sex entirely than to face feelings of failure if he can’t make you orgasm.

5. He doesn’t feel confident about his body.

Women aren’t the only ones who face self-esteem issues. Perhaps your boyfriend is struggling with his body image.

He compares himself to other men in your life and feels inadequate. He might be questioning whether or not you even find him attractive. Giving him compliments and putting in the effort to show you find him sexy might be all he needs to get excited about you again.

6. He feels unwanted or unappreciated.

If you aren’t meeting your boyfriend’s emotional needs, then he may not feel a desire to be intimate with you.

Maybe he feels you are too demanding of him and is exhausted trying to meet your expectations. Or, you’re constantly nagging him over minor things while not appreciating all of the things he does for you.

7. He has been getting his needs taken care of elsewhere.

It can be hard to hear, but if your boyfriend’s sex drive suddenly plummets, he might be getting his needs taken care of elsewhere.

8. He naturally has a low sex drive

It’s normal to have sex more often at the beginning of a relationship. After you’ve been together for a while, intimacy tends to taper off a bit.

Generally, this period is when you get to know each other’s typical sex drives. It’s natural for some people to desire more frequency than others. However, you need to consider the possibility you’re incompatible if your boyfriend has a much lower drive than you do.

9. He has a physical issue he can’t help.

Before you jump to any conclusions, consider maybe your boyfriend is dealing with a physical issue preventing him from having sex with you.

While more common for older men, younger guys can still deal with these problems. If this is the case, he should see a doctor to diagnose and treat the issue.

Learn To Write An Emotional Letter To Help Smooth The Bumps

How Can I Get My Boyfriend Interested in Me Again Sexually?

Just because your boyfriend is disinterested in you sexually now doesn’t mean it’s going to last forever.

Wondering how to put an end to his dry spell? The following are some ways you can bring the passion back into your relationship until he can’t keep his hands off you:

If you keep thinking, “He doesn’t get turned on by me anymore,” don’t give up hope. Yes, it’s hurtful when your boyfriend doesn’t want to be intimate with you, but it doesn’t automatically mean your relationship is over.

With a bit of work and mutual understanding, you can bring the passion back into your relationship. Dry spells don’t last forever!