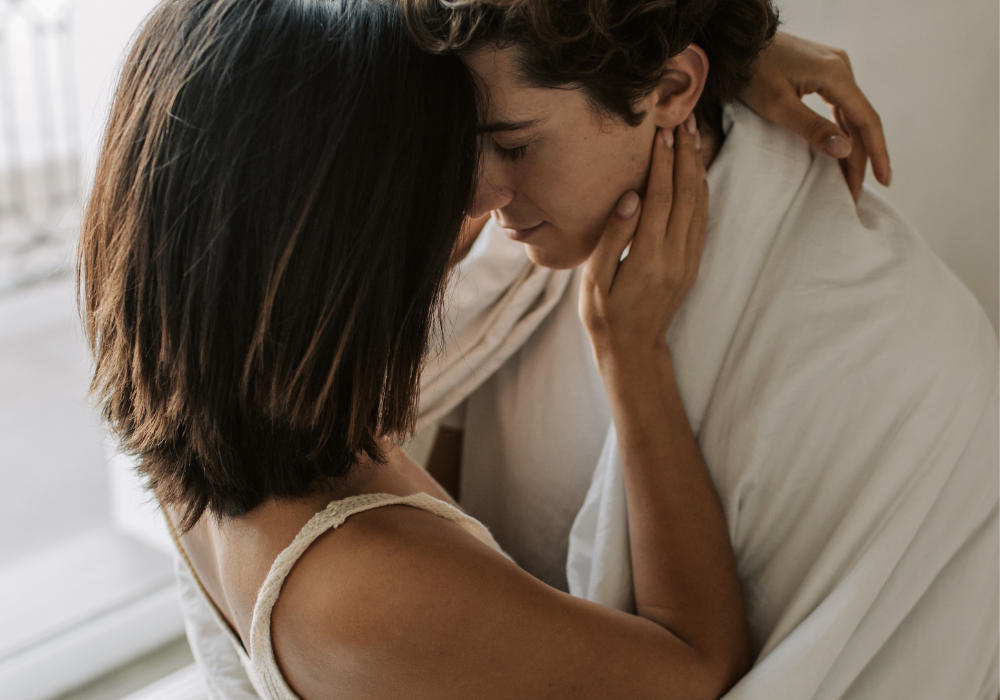 Do guys catch feelings after hooking up?

Do guys get attached after sex?

Ultimately, the answer depends on the person.

Some are highly sensitive; others are dogs only out for one thing.

But generally speaking, yes, men are just as capable of becoming attached sexually as women are.

So today, we’re exploring the chemistry of attraction, in addition to 15 clues that a man with whom you sleep has caught feelings.

How Do Guys Get Emotionally Attached?

Ingrained stereotypes would make you believe that men are less emotional than women and, therefore, more cavalier about casual sex.

And while some studies suggest that women are more likely to feel more bonded after being intimate, the truth is that men are just as capable of falling head over heels for a woman after intimacy if the right hormones are triggered.

Although there’s no formulaic rhyme or reason why people fall for each other, sometimes, you can help encourage an emotional connection in men by implementing a few behaviors and parameters.

Everyone wants to be loved and appreciated for who they are, not how they can enhance someone else materially.

Sure, some people think being a good provider is attractive — but it’s rarely enough.

It’s important to let your man know that you dig him for him – faults and all. After all, isn’t that what you want in a partner?

2. Allow Yourself To Be Vulnerable

Vulnerability is a huge part of emotional intimacy, and in some instances, you’ll need to demonstrate how to let one’s guard down. When you allow yourself to be vulnerable with the person you’re seeing, it often encourages them to do the same.

3. Foster an Atmosphere of Emotional Safety

How does it feel when you’re around someone with whom you can be completely yourself — warts and all? It’s pretty amazing, right?

If you want to give that gift of emotional safety, shower your man with unconditional acceptance. Trust is also important. So don’t go around spilling his secrets. Moreover, say what you mean — and mean what you say. It goes a long way.

4. Keep Things Light for a While

Men are easily turned way off by clinginess. It’s a glaring red flag for most folks. If the goal is to create a strong relationship that goes somewhere, keep it light and playful for a while.

Let the partnership and friendship build slowly. If you do, when things get serious, you’ll be standing on firmer ground.

It might sound old-fashioned, but making a guy chase you works. Being overly eager can read as desperate. So give him space.

Don’t always be available. Let him miss you. There’s no need to answer every message as soon as you get it. Make him understand that you’re a catch worth chasing.

Do Men Get Emotionally Attached After Sex? 15 Clues They Feel Closer to You

Does sex create feelings? In a word: Yes! But how can you tell when a guy feels closer to you after being intimate?

Everybody is different, but there are a few clues. If your man doesn’t do every single one of the points listed below, it doesn’t mean he doesn’t love you or feel close to you.

Again, every person is unique and shaped by their own quirks, habits, experiences, and personality. However, it provides a general guide to male post-coital expressive behavior.

If, after sex, he stays in bed and wants to cuddle, consider it a great sign. Men who are only after the physical part get up and leave.

In the worst cases, they immediately turn cold. Sometimes you’ll hear from them; sometimes, you won’t. However, if he takes the time to stick around, cuddle, and chat afterward, it’s a sign that he’s catching feelings.

However, don’t be discouraged if he doesn’t always spend the night. Some folks cannot fall asleep unless they’re in their own beds. Or he may have something big going on the following day and needs to be up early.

2. He Starts Talking About the Immediate Future

Talking about the immediate future directly after sex is a good sign. It signals that he doesn’t see you as a one-night stand.

Moreover, it shows that he wants to be seen out and about with you. For example, he may ask what you’re doing the following day or try to lock you down for dinner plans.

If he starts talking about his friends and suggests that you meet them, you’re in like Flynn! Men don’t suggest such things if they’re not catching feelings.

3. He Wants You To Meet His Family

If you’ve been dating for a little while, and he mentions meeting his family after sex, rest assured that he is emotionally attached to you.

Meeting a guy’s family is a huge step, and you’d be hard-pressed to find one who would introduce someone that they’re only casually dating to mom, dad, or his siblings.

In fact, you should be suspicious if a guy starts suggesting that you meet his family only after a couple of dates. It could be a sign that he’s too attached, too early. Hey, it’s always wise to check in with your gut.

If a guy sticks around after intimacy, especially into the following day, there’s a good chance he’s caught feelings for you. People who are only in it for physical satisfaction usually don’t stick around.

But make sure you haven’t attracted a scam artist. It doesn’t make sense if a guy is talking about moving in after a couple of days!

5. He Messages or Texts the Next Day

Receiving a text message the day after you sleep with a guy for the first time is an excellent sign. It shows that he’s still interested and wants to see where things go.

If he asks you to do something the following day, assume he’s got it bad for you. However, always protect yourself emotionally.

Don’t give too much of yourself too soon. Instead, be cautiously optimistic and let things unfold at a reserved pace.

How Many Dates Should You Have Before Having Sex? All Your Burning Questions Answered

If you’ve been seeing each other for over a month, and he blurts out “I love you” during lovemaking or right after, don’t assume he’s just saying what you want to hear.

There’s a good chance he genuinely feels that way. So if you also have strong feelings for him, let him know!

But if you don’t love him, don’t say the words reflexively. Honesty is always the best policy in these situations — but do try to be as gentle and kind as possible.

7. He Starts Talking About the Long Term Future

Guys who start talking about a future that includes you are likely emotionally attached. Except in the rarest of circumstances, well-adjusted people don’t jump into the relationship deep-end early on.

While folks may feel an incredible spark initially, they usually hold their tongue for at least a few weeks.

Once a guy can visualize you in his future and feels comfortable talking about it, he’s head over heels.

8. He Starts Holding Your Hand

Intimacy is about more than just sex. So when your man starts being affectionate with you in public, take it as a good sign.

Does he constantly grab for your hand? It means he wants to show the world that you’re his. It’s also a signal that he has developed intimate feelings for you.

However, hand-holding is not a fool-proof test. Many people are walking around this planet who are simply not into it. For them, holding hands is uncomfortable and immediately makes their palms sweaty.

If there’s a considerable height difference, hand-holding can also be awkward. So don’t give up hope if your man falls into one of those categories.

Many men have a protective instinct that’s triggered by affection. If a guy doesn’t genuinely care about you, he probably won’t be too concerned about your feelings or safety at a granular level.

But if he makes moves to ensure you’re OK, take it as a sign of attachment.

10. He’s More Vulnerable With You

For better or worse, men are taught to be “tough.” As a result, many bury their emotions and lock down their vulnerability.

When you’re able to crack through that shell, and he regularly opens up around you, it’s a strong clue that he is emotionally invested in you and the relationship.

11. He Encourages You To Shoot for Your Dreams

Does he really listen to you or just “yes” you to death? Does he send you articles and information that he stumbles upon related to your interests and passions? Is he around to support you when you’re working toward a goal?

If you answered yes to all these questions — or even just two — consider it evidence that your man cares a great deal about you on more than just a sexual level.

Do you sometimes come first in his world, or is he always the main attraction? Emotionally invested men prioritize the life and feelings of their significant other.

But there’s a difference between putting someone on a pedestal and healthy adoration and encouragement.

Be careful of men who want to treat you like a pampered pooch but don’t show much interest in your professional or personal goals.

13. He Wants To Spend Time With You

If a guy wants to spend a lot of time with you, it’s a good sign. Clearly, he enjoys being in your company! When a relationship is new, the desire to spend every waking second together can be intense.

Go ahead and indulge those lusty instincts, but make sure not to ignore friends during this period. After all, they may not be around if things don’t work out.

When you first start dating someone, they can be cautious and closed off. They may also talk around certain subjects.

Once you get past this initial stage and he begins communicating more directly, it’s a sign that he feels more comfortable and emotionally attached to you.

15. He Remembers the Little Things

Sure, grand gestures can be wonderful. Sometimes, however, they become more about the giver than the receiver.

When a guy takes the time to remember the little things, that’s when you know you’ve got a keeper — who’s fallen hard for you!

Dating is a roller coaster, especially when it comes to sex. Some relationships are terrible, and others make you feel like the queen of the world. Try to extract lessons from all of them. But most of all, enjoy yourself!