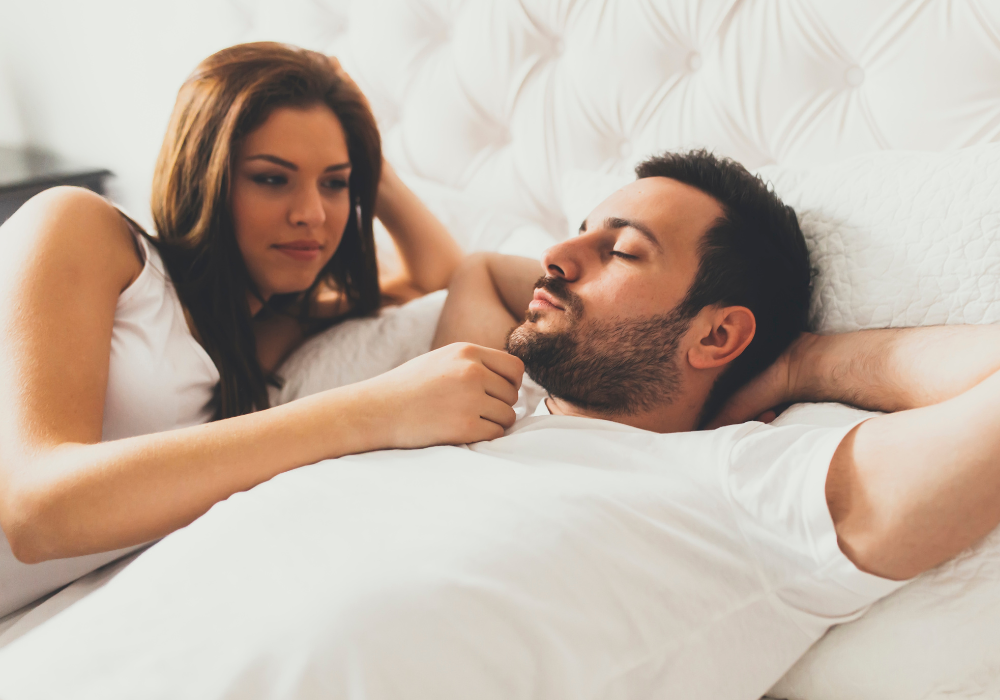 Maybe it was the first night you met, or perhaps it was your wedding night.

Whichever the case, you’re now wondering: How do men feel after sex?

If you’re attempting to read the tea leaves regarding how he acts the morning after, understand that myriad answers satisfy the question.

So let’s dive into Average John’s brain, swim around, and examine 17 things he could possibly (probably) be thinking after intimacy.

What Do Guys Think After You Sleep With Them? 17 Insights Into His Thoughts

If you’re a female, after having sex with a guy for the first time, you may think something like, “Is he still interested after sleeping with me?” or “Wow.

That wasn’t nearly as satisfying as I’d hoped.”

So what’s percolating in the gray matter of the guy lying next to you?

Believe it or not, many of the same thoughts dripping out of your mind are similar to theirs.

Men can be incredibly insecure after sex, and what he thinks after you sleep with him often flows in that direction.

To wit, “I wonder if I was good enough?” is at the top of the list of what guys think after a hookup.

Sure, you’ll occasionally land in the bed of an uber-masculine narcissist convinced he’s god’s gift to sex.

But the truth is that most guys are pretty insecure — especially if they have feelings for the person with whom they’re being intimate.

If you feel like throwing him a bone, emphasize how good it was.

Timing is a big thing regarding intercourse — so much so it has its own collection of urban legends. (Have you heard the one about Sting, the musician, holding a seven-hour tantric lovemaking session with his wife?)

After doing the deed, many guys immediately wonder about the time. Did they last for a long time? Was it too long? Or did he orgasm way too quickly? Should he be embarrassed?

So if he seems distant, he may just be thinking through the math.

Increasingly, more and more men are concerned about whether their partner climaxed. (We say “increasingly” because there once was a time when people thought women could not orgasm. And sadly, it wasn’t as long ago as you may think.)

He may ask you directly, “Hey, did you come?” It may sound crass, but sex-brain isn’t always the most eloquent.

It’s the age-old question after early-relationship intimacy, and unwritten rules apply in the average situation.

Another tip: Don’t always interpret someone leaving as a terrible sign. Sometimes, life gets in the way, and staying is impossible.

Have you been dating for a while? Are there more emotions in the mix than just physical pleasure?

If so, post-coital thoughts could veer toward the romantic. Or, their feelings for you may swell. Both are super if you’re also into them. But things can and will get awkward if one of you feels this way and the other doesn’t.

So, as much as some of them like to talk, very few get sex regularly, and when they enjoy a carnal evening, they may bask in some self-congratulatory glory.

Look, they’re proud of themselves! (In some cases, it’s completely endearing. In other cases, it makes you clap your hand to your forehead and self-admonish, “What did I just DO!?”)

But yeah, some guys are not big thinkers after sex, and the most they can muster is a pat on their own back.

7. “I Should Keep [Insert Name] In My Booty Call Rotation.”

It happens to most people. At some point in their youth, they go through a, shall we say, “experimental” phase. For some, it’s a lot of heavy petting. For others…well… there’s a lot of sex.

If you’re someone who enjoys intercourse as much as possible, you may have open relationships or a stable of what’s commonly called “booty boys,” aka, “the men you contact when you’re in the mood for a booty call.” Well, guys keep those lists too.

So, if it’s more of a casual thing, he may be thinking: Should I get her number? We may have fun again in a few weeks. And she seems down to play.

Did you meet at the bar, get blinding drunk and go home with someone you met a couple of hours ago — while heavily intoxicated?

In these situations, you may forget names. It’s never a good look, and when you’re the one whose name can’t be recalled, it can be downright humiliating. If it happens, brush it off and keep going.

But remember how it feels the next time you get wasted and contemplate heading to bed with Mr. For Tonight Only.

You’re Friends But Want A Romance: How To Get Out Of The Friend Zone

Is Sex The Only Way To Be Intimate With Your Partner? 17 Non-Sexual Intimacy Ideas You Should Know

Is it crass to talk — or even think about — penis size? To some folks, probably. But ultimately, it’s just an organ, and sometimes, the bigger it is, the better the sex.

So yes, many men out there will, immediately after coitus, ponder their relative size compared to your other lovers.

If you want to make a guy feel great after sex, compliment his performance and his…ahem…tool. If you want to keep the mystery vibe intact, say nothing.

Sex can be a sweaty, fluid-filled experience. And yes, sometimes, the only thing one wants to do when it’s done is take a long, hot shower.

It’s not the most romantic thing, but if you have been together for a while, showering together is always fun.

So what’s the big lesson here? Before you have intimate guests, ensure your bathroom is clean — including the shower!

People talk. It’s not the most ethical thing to kiss and tell — but many people do it. So, of course, your paramour may wonder what you’ll share with your friends about him.

Which begs the question: What should you tell your friends about your lovers?

Having a best friend with whom you share absolutely everything is perfectly acceptable. But don’t go blabbing about your intimacy to everyone. And you certainly don’t need to post anything about it on social media — even if you get into a fight.

Sex can be very tiring! Plus, men and women exert different chemicals and hormones during the event. And for guys, it wipes them out. Ladies may be sleepy afterward, too, but it’s more prominent an issue for gents.

In fact, after-sex exhaustion is so common the Brits have a special word for it: knackered.

Oh, and feel free to take someone falling asleep right after sex as a compliment — (unless they were blindingly drunk.)

People say that sex is just like pizza and that there’s no such thing as a “bad slice.”

But people who’ve tried pizza abroad know that the saying is a lie — because pizza in some corners of this world is downright awful. And yes, the same goes for sex.

There is such a thing as terrible intercourse. There are times when two people just do not fit together.

If you land in such a situation, there’s a chance your misfit partner is also thinking the same thing. But these cases aren’t as bad as they may seem. You both want to escape ASAP, which makes it much easier to move on and forget it ever happened.

If it went well, and you’re both feeling each other, he may be wondering whether to ask you out for another date.

Take this as a great sign. If he weren’t into you, he’d be out the door faster than you could say, “one-night stand.” But if he’s anxious to lock you down after doing the deed, whatever this is could be going somewhere.

If you’re hoping this is the case, drop a subtle hint that you’re open to seeing each other again. If he doesn’t reciprocate, don’t push the issue. There are plenty of other fish in the sea.

Don’t waste time pining for people who just aren’t into you. You’ll kick yourself for all the energy you wasted when you’re older.

Though rare, in your coital travels, you may come across a man who has energy to spare. Guys like this can usually go like the energizer bunny — and many are darn good at their craft.

If you find yourself horizontal with one of these sexual stallions, there’s a good chance he’s thinking he may be wondering if you want to go again for another round.

16. “Is This Person Relationship Material?”

They could be sizing you up in a calculated manner because, for many people, deciding who to date is a complicated calculation. So if that type of guy finds himself in your abode, he’ll probably be checking out what you have, your style, and any clues about your background.

Is it transactional? Sometimes. But for people with material concerns, these things matter.

And then there’s the guy who really is thinking nothing. It doesn’t mean he’s dim or off or weird. It just means he’s zen after sex, and who can fault that?

Sure, it can be frustrating not knowing what’s on his mind only to learn that it could be absolutely nothing. But give him credit for being in the moment, and let the next steps reveal themselves.

FAQs About How Men Feel After Sex

Still got questions about how men feel after sex or hooking up? It’s perfectly normal — and we’ve got answers.

How do you get a guy’s attention after you sleep with him?

Sleeping with a guy will get his attention either way. If he’s more traditional and you sleep with him early on, he may look at you in a different light and only call you up when he has physical urges.

If the guy in question is more relaxed about sex and wants to pursue something, you’ll likely hear from him within 48 hours after intercourse. If you try to contact him and don’t hear back, don’t bug him — just move on.

Do guys care if you sleep with them right away?

It depends on the guy. Men usually fall into one of three categories:

Why do guys distance themselves after intimacy?

Guys may distance themselves after intimacy for many reasons. Some are harmless, but others can be telling. They may pull away if they feel you have slept with them too soon. The same goes if they just aren’t into the sex you had – or that into you.

Why do guys change after you sleep with them?

Some guys are dogs. So once they get what they want, they no longer need to try. Do yourself a favor and dump this kind of guy fast. He’ll just be a headache down the road, and you deserve someone better!

As long as you’re safe and it’s consensual, sex can be a lot of fun. Figure out what works for you, and go with that. Then extend that sexual-choice freedom to everyone.