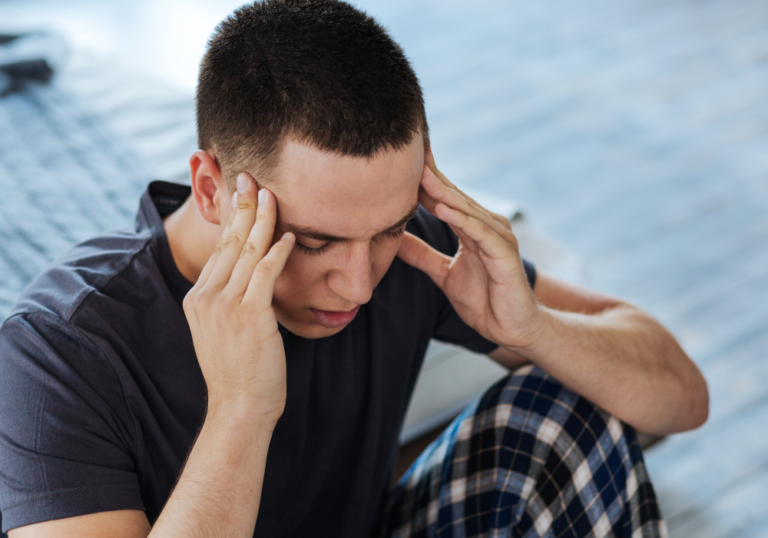 Guys can sometimes be a little self-conscious, but that feeling can paralyze men with low self-esteem.

If you’ve been wondering whether your guy has low self-esteem, there are subtle signs that can help you identify that he might.

And if you’re concerned, act sooner rather than later to work on the problems together –  or decide to move on if necessary.

Let’s explore the characteristics of guys with low self-esteem and how you can help them feel better about themselves.

(Sidebar: Would you like to bump up your confidence and feel great in social settings? If so check out my online course sale that’s going on now!)

What Causes Low Self-Esteem in a Man?

Low self-esteem is quite common in men.

Several factors can contribute to men being dissatisfied with their looks, social life, and personal life.

Below are seven leading causes of low self-esteem in men.

1. Comparison to Other Guys

Guys are often critical of themselves and emphasize their perceived shortcomings compared to other men. They tend to look at the negative rather than the positive aspects of their lives and themselves.

This tendency can lead to feelings of inadequacy and low self-esteem. Men should compare themselves to realistic standards, not to others who have different values than they do.

Men are taught from a young age to avoid showing vulnerability, so their dating experiences often leave them feeling insecure about their value as men.

Men also try to strive for perfection, which can leave them feeling inadequate or that they don’t match the competition in the dating pool.

Men often feel inferior to stereotypes of masculinity. Many male children and young men were once discouraged from showing emotion.

Young boys learn to accept that being feminine is wrong, and they shouldn’t reveal any typically feminine interests or emotions.

With so few role models validating their feelings, it’s no wonder many men have low self-esteem and don’t feel comfortable in their skin.

Anxiety and depression make many guys feel inferior. Mental health disorders might make you feel “less than” others even if you don’t consider yourself that way.

Lack of self-esteem can be caused by sexual abuse, domestic violence, lack of validation, or feeling unwanted as a child. Adverse events leave mental and physical scars that affect how you see yourself.

Many men are exposed to attractiveness and thinness ideals from a young age in our appearance-obsessed culture.

False standards can still affect adults as our culture also glorifies conventionally attractive women. Therefore, advertisers often portray their ideal lady based on how she looks, which can make men self-conscious and insecure.

People sometimes feel like failures if they don’t achieve their goals. Low self-esteem can cause problems in men’s lives, although many don’t realize it.

People tend to feel like they’re letting people down or embarrassing themselves when things go wrong. This can lead to low self-esteem among guys, who may feel like losers if they aren’t accomplished.

7. Lack of Validation from Others

Men need external validation of their abilities and accomplishments to feel a sense of self-worth.

Being told that you are competent or talented will not typically cut it for most men. Men need affirmations and positive feedback from the people they care about and from potential love interests.

13 Characteristics of a Man with Low Self-Esteem

1. He berates you (and others) without cause.

A man with low self-esteem is a man that feels inferior to others and needs to prove himself continually. He may believe others will recognize his superiority if he criticizes them.

This behavior is toxic and can make people feel uncomfortable and even retaliatory. A man with low self-esteem typically walks around with a chip on his shoulder.

2. Your sex life is less than ideal.

His moodiness and lack of self-confidence impede physical intimacy and communication. This can cause issues in a relationship, as well as in daily life.

It can be hard to get your partner to open up when they feel inferior, so they tend to keep things to themselves.

This can make sexual activity feel like an obligation instead of something desirable, making your partner feel guilty and worsening the problem.

3. He’s defensive and blames others.

He dislikes being exposed and vulnerable, so he meets any criticism with his vehement denial.

When confronted, a man with low self-esteem will say, “I’m not doing that. That’s just who I am.” When criticized, he’ll deny it, pretend it didn’t happen or make it a joke.

He ignores or blames his flaws when confronted with them. He’ll feel like others are out to get him when they criticize or point out his shortcomings.

He may withdraw from others or start fights or arguments. Most do it to avoid feeling bad about themselves.

4. He looks outside himself for contentment and fulfillment.

He finds worth in his job, career, finances, romantic relationships, appearance, or other external sources. Most of these things can’t fulfill our desires nor give us more.

They can’t fill our void. A man with low self-esteem may need constant validation from external sources to feel worthy.

When we love and accept ourselves, we can start to accept and value the unique individual rather than the roles we play.

5. He doesn’t feel loveable or desirable.

He can’t see why anybody would fall in love with him. Because he has low self-esteem, he believes he must be repulsive to the opposite sex.

He may think he is too fat, too skinny, has ugly facial features, has an unattractive body, is not good enough, not smart enough, or not a good lover.

A man with low self-worth may not call often or send you enough messages to make you feel valued or compliment you enough to feel appreciated.

When he doesn’t feel good about himself, he has trouble expressing positive feelings about others.

How To Write A Personal Mission Statement With Examples)

97 Best Words Of Encouragement For Men

6. He acts insecure and feels shameful.

Everything he does causes him to feel guilty, and he doesn’t know how to stop being apologetic.

A man with low self-esteem will suffer a lot, feel sorry for himself, and not understand what he does that affects the people around him.

He’ll keep apologizing because he doesn’t feel like he deserves better. He’ll be hard on himself and feel like he’s not successful or good enough.

And sometimes, he’ll act like a child, making excuses and blaming others.

He puts his self-doubt on you, shifting the responsibility from himself to you. Instead of owning up to his feelings and actions, he blames you.

He may gaslight you by telling you that you are overreacting or exaggerating his behavior.

8. He has trouble making decisions.

Men with low self-esteem often seek validation from others when they feel down, but they may receive the wrong kind.

He may feel inadequate if he must make decisions that affect others, such as hiring staff or deciding what to do with his assets.

This issue can result from feeling like he’s not good enough or that his opinion doesn’t matter. His insecurity can also make him feel not in control of his own life, further decreasing his self-esteem.

9. He carries himself uncomfortably.

His demeanor lacks confidence, and he refuses to accept compliments. Low self-esteem does not allow a man to perceive his value.

This deficiency manifests in how he carries himself, his interactions with people, and his overall approach to social situations. He is uncomfortable with praise and will deflect it with a negative comment.

He may become somewhat of a hermit, preferring to spend time with people who make him feel good about himself rather than seek out those who may challenge him.

10. He has a victim mentality.

This mentality manifests itself as constant pessimism and jealousy. He sees the world as dangerous and is always worried about being attacked and criticized.

He perceives himself as a victim and believes he deserves whatever he gets. When he feels inadequate, he may experience physical symptoms, such as headaches, stomachaches, or muscle pains.

These ailments can make him seem weak, passive, and indecisive, but it’s a way to avoid mental anguish. His intense emotions make him view others as enemies. When wronged, he may lash out.

11. He has anxious body language.

He may stand with his arms crossed or slouch or lean away from the person to whom he’s talking.

Non-verbal communication can tell you a lot about how a guy feels about himself. If a guy exhibits many dismissive or aloof body language cues, it might be a sign that he doesn’t regard himself well.

He has trouble imagining another’s situation. It’s hard for him to put himself in anyone else’s shoes.

He’s a poser and will wear a mask to act confident. He desperately tries to fake confidence when he doesn’t feel it. He may listen carefully and seem eager to learn when you talk to him. To show interest, he may repeat what you said.

But though he looks open to advice and new experiences, he won’t ask for help because he’s insecure. He may be critical of others and see them as incompetent, but these are just deflections revealing his feelings about himself.

13. He feels inferior to others.

His inferiority may cause him to compare you to others or the “ideal woman” and feel you aren’t good enough, despite your efforts to make him feel valued.

Because he feels inadequate or like a failure, he needs you to make him look good and boost his fragile ego.

He’ll avoid situations where he might feel inferior to others. It causes him to withdraw from social settings and avoid activities that require him to be around other men.

How to Support Your Man with Low Self-Esteem

Low self-esteem can have a detrimental impact on your relationship.

For men, you must understand that low self-esteem is not a character flaw. It has a root cause that you must address through therapy, practice, and patience.

Low self-esteem can be caused by trauma, mental illness, and professional and social pressures. If you notice any characteristics of low self-esteem in your man, it is best to approach him with words of encouragement and love.

A man can elevate his self-esteem by first recognizing that it’s lacking. Then he must work on self-acceptance and try to improve whatever he can.