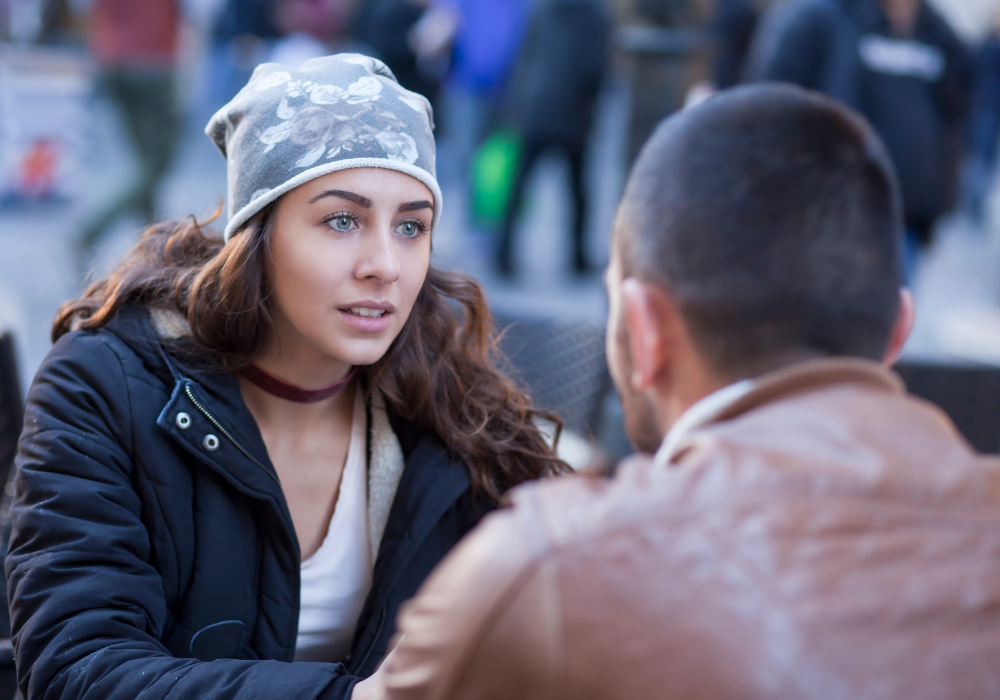 He reached in, plucked out your heart, and then slammed it on the ground and stomped.

You may have broken up; it may just be a big fight; whichever the case, you’re hurting — badly.

As such, you may be wondering: Is he hurting, too?

Does he feel bad about how things ended?

Today, we’re exploring signs he feels guilty for hurting you.

We’ll look at how guys generally react when they know they’ve behaved poorly, then unpack 19 things that signal when a man is ashamed of his actions.

Do Guys Feel Bad When They Hurt You?

Whether guys feel bad when they hurt their romantic partners depends on the guy. It’s also often contingent on how they see you.

If the relationship is more of a “situationship” in their eyes, the hard truth is they may not care all that much about your feelings.

But if a guy genuinely likes you, and he’s not a narcissist, he’ll probably feel bad if you two are on the outs and he caused it.

Now, how he chooses to express that is another matter altogether.

19 Obvious Signs He Knows He Hurt You

So what are the signs he is sorry for hurting you?

We’ve curated a list of signals that may reveal his true feelings.

But one size doesn’t fit all when it comes to this question, so we’ve categorized the signs by personality type. Your fella may fit neatly into one category or span several.

Mr. Gift Giver speaks with his bank account. If gift-giving is your love language, he is the guy for you!

It’s an oldy but goody: flowers! Sure, they may not last long, but there’s nothing quite like getting a gorgeous bouquet of sweet-smelling petals. It’s the ultimate, traditional, romantic gesture, and for Mr. Gift Giver, it’s usually sincere.

2. He Buys You an Extravagant Gift

Is your man’s bank account, shall we say, accommodating? If so, to make up for a major wrongdoing, he may retreat into his vault and return with something extravagant.

Who knows, you may even end up with that special something you’ve been eyeing.

3. He Tries To Buy You Back

Whether it’s dinners at excellent restaurants or 1,000-count Egyptian cotton towels, he’s ready to get you whatever your heart desires.

The smart ones pick things they know you want because it shows that they pay attention.

While presents are lovely, make sure he’s not always trying to buy your affection. Make it clear that you’re with him for him, not for what he has.

As much as we love him, as much fun as he can be, Mr. Egotastic still has yet to master the art of maturity. He may have other great qualities, but admitting fault is not yet one of them.

Few things in life are more difficult than learning to gracefully acknowledge our wrongs and faults. In fact, some people never master the skill and instead become defensive in the face of conflict.

It’s not the most productive way to handle a dispute, and calmly talking about disagreements is ideal. If he refuses, maybe it’s time to start reevaluating the relationship.

After all, do you really want to be with a guy who still fights like he’s in kindergarten?

Some guys take it one step further than defensiveness and become more combative by starting petty fights.

Think about why your guy is like this. Is it a family trait? Is it rooted in his childhood? If so, encourage him to see a therapist. Or, at the very least, open up to you about why he chooses argumentation.

But never tolerate abuse — physical or mental. If you feel stuck in an abusive relationship, take advantage of resources like the National Domestic Violence Hotline.

6. He Plays the Victim

When a man feels guilty after a breakup, he may try to play the victim. If your man falls into this category, he’ll twist things to blame you. Dudes who do this usually try to gaslight, too.

Did he disappear? Are you afraid he’s ghosting you? He could be, or his ego could be in pieces on the floor, and he’s too embarrassed to face you. He knows he’s wrong, but he cannot bring himself to admit it in person.

Is your man a sweetheart who isn’t always the most eloquent? These men are usually lovely, but they stress themselves out about saying the exact right thing.

8. He Becomes More Introverted and Quiet

Sensitive people who are ashamed and insecure about how they acted may retreat into themselves. If he wants to stay in all the time and becomes super quiet, it may be a sign that he knows he was wrong.

9. He Watches His Words

Is he super careful about how he speaks to you now? That’s a good sign. He knows he messed up and is trying to do better. If, however, it’s stressing him out, put the boy out of his misery by assuring him it’s OK to move past the disagreement.

10. He Makes Light of the Situation

Sometimes, it’s easier to make light of a situation instead of tackling it head-on. Mr. Tongue Tied will often take this route.

Letting it slide may be the best move if the dispute isn’t a big deal in the grand scheme of things. However, you should handle foundational arguments to the point where you both feel closure.

He can sweet-talk a snake out of a sack. Sometimes he means it, and sometimes he doesn’t. But he’s your man, so you’ll be able to judge his genuineness.

Mr. Casanova Wordsworth may pour it on thick and say things like, “I don’t deserve you!”

The good news is that they usually mean it. After all, it takes a lot of awareness and humility to get that out! However, beware of men who honey-tongue their way into bed.

If you’re still in contact with an ex who now feels terrible about ending it, you may notice that he frequently brings up happy memories of your relationship.

It could be one of two reasons:

A guy who takes this tact may do a lot of the heavy lifting on social media by posting throwback pics or commenting on posts that remind him of your shared past.

Is he trying to win you back with sweet words and actions? If so, he probably knows he has some ground to cover.

Guys who go this route usually have deep feelings. After all, if they didn’t care about you, they wouldn’t work so hard to win you back.

14. He Keeps Devising Ways To Talk to You

Did you break up with him? Since then, has he been devising ways to talk to you? This is usually a sign he’s not ready to let go of you or the relationship.

If you want him back, make him wait it out a bit — but not too long. After all, he may give up and find someone new one day.

15. He Shows Extra Interest in Your Work and Activities

If you haven’t broken up, but things are tense after the argument, he may try to get back into your good graces by showing an extra interest in your activities and goals.

Yes, it would be better if he was mature enough to apologize, but this isn’t a bad runner-up.

The Duke of Do Right

You’re lucky! You found the Goldilocks of boyfriends. The Duke of Do Right is mature, measured, and secure enough in himself to admit when he’s wrong.

The Duke of Do Right always apologizes — and he’s good at it.

We all make mistakes. The key to a healthy relationship is recognizing when you’re the problem and acknowledging your missteps. Guys operating at this level of emotional maturity are often keepers.

Once he apologizes, he may go through a period of extreme attentiveness. He wants to show that he cares, and in most cases, he’ll be upfront about his intentions.

18. He Tries To Make You Laugh

Humor can be a great way to handle drama and upsets. Some men will use self-deprecating jokes to demonstrate they know they messed up.

Using witticism to deal with arguments can be great — unless they go overboard and use it instead of a genuine apology.

19. He Makes an Effort To Do Better

When a romantic partner treats you poorly, the goal is for them to do better in the future. So if your man genuinely makes an effort, that’s great.

However, it may be a red flag if he keeps promising to change and never does.

FAQs About Signs He Regrets Hurting You

We’ve discussed the signs he puts out when a guy knows he hurt you. So, let’s wrap things up with answers to frequently asked questions regarding male sensitivity related to romantic relationships.

How do you tell if he will hurt you?

It’s not fair to judge a book by its cover — nor is it wise to judge a man by his exterior. However, if he starts acting shady and letting you down regularly, there’s a better chance he’ll eventually hurt you. Behavior reveals all!

How do you let a guy know that he is hurting you?

Honesty is almost always the best policy. Don’t expect your partner to be able to read your mind. If they’re doing something that’s hurting you, let them know.

Try not to be aggressive about it. Instead, calmly tell them what’s bothering you and take it from there.

How do you make a man feel guilty for hurting you?

However, desperate times call for desperate measures. So when you want to drive home a point and lay on a smidge of guilt, stop communicating.

Only provide one-word answers and act generally aloof. Before you know it, he’ll be begging to sit down and have an honest conversation about what happened.

Signs He Is Not Sorry for Hurting You

Not every guy is Prince Charming. Unfortunately, we sometimes stumble upon a grade-A codpiece. These guys care very little about anything but themselves.

So how do you know if he’s not sorry for hurting you?

Everyone messes up at some point. So second — and even third — chances are a good policy. But if he’s constantly making the same mistakes and treating you disrespectfully, maybe it’s time to let him go!

Sure, love isn’t always easy, but it’s also not meant to be a never-ending battle.