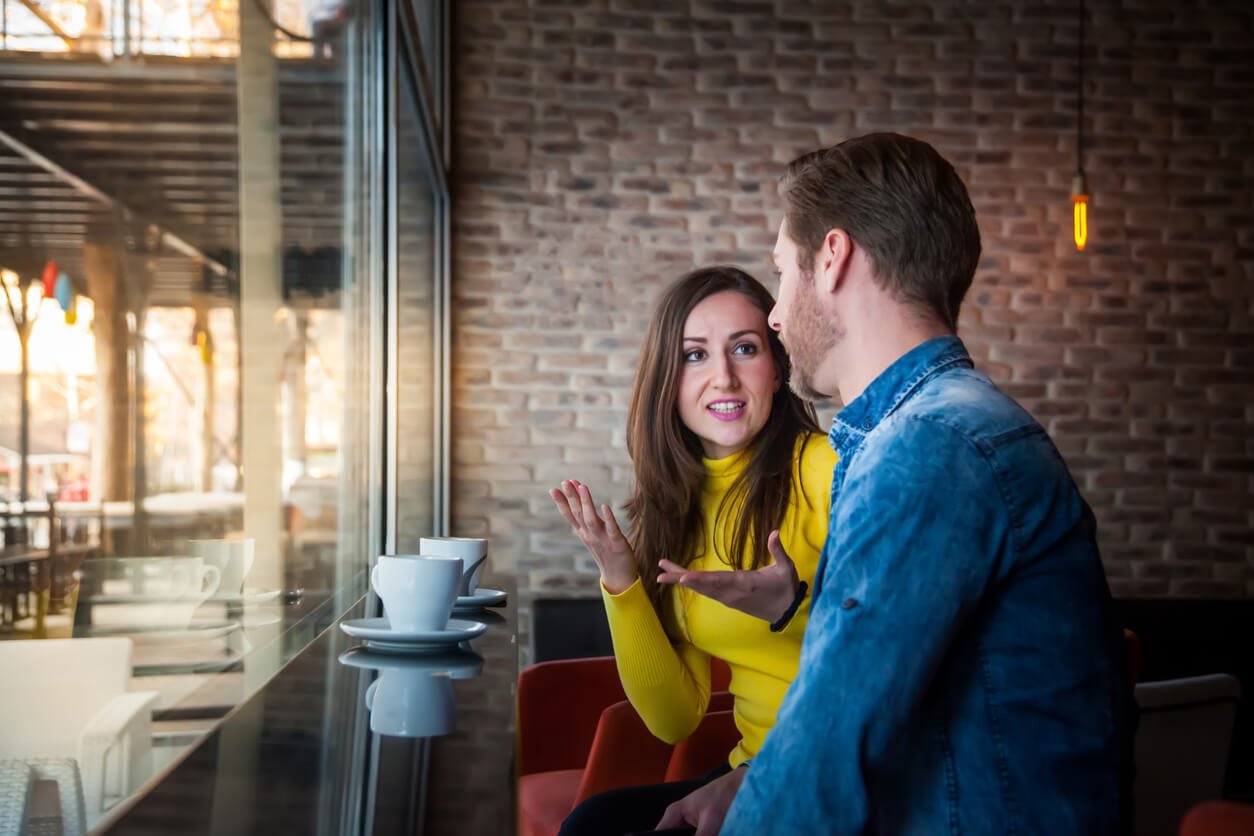 You have some critical questions for this guy you’re getting serious with, but you’re uncomfortable asking them.

Asking some questions too soon might send him running for the hills.

Or at least you’re afraid it will.

You don’t want to suddenly lob a bunch of serious stuff at him all at once or at the wrong time.

Some of your questions are awkward or sensitive, and the timing has to be just so if you want him to feel safe answering them.

But good questions for guys are part of getting to know him and determining whether the relationship can continue based on mutual trust and honesty.

What Questions Should a Girl Ask a Guy?

You need to know the best questions to ask your man, so you don’t miss any dealbreakers later in the relationship. If you’re too afraid to ask now, you may be sorely disappointed down the road when your heart is deeply invested.

But you want to word sensitive and touchy questions the right way. Luckily, most guys prefer upfront honesty and being direct when asking questions.

You don’t need to beat around the bush. Putting it out there is the only way to find out what you’re longing to know.

What are some uncomfortable questions to ask a guy?

Girls ask guys questions about topics such as:

Whatever topic is on your mind, we have you covered with some common questions you’ll want to consider.

There are many awkward questions to ask a guy, but some are more common than others.

Take a look at this list of 27 questions that are uncomfortable to ask a guy.

Make a note of the ones you want to ask your guy, and begin thinking about when, where, and how you’ll ask him.

The most common question women wonder about is who should pay for dates. Whether he wants to go dutch, alternate, or pay for all of the dates, agreeing on how to pay for them allows you to keep having fun without worrying about money.

2. Is it true that sex is always on guys’ minds?

It’s a common belief that guys always think about sex. While it’s probably not on your guy’s mind all the time, this is a great way of asking him if he thinks about it a lot.

3. How long does it take for you to commit?

Most women want to know how long it takes for their partner to take the relationship seriously or become an exclusive couple. Some guys commit from the beginning, while others need a certain amount of time.

It’s valuable to know when your guy is likely to move forward with the relationship – and if his timing matches yours.

Knowing the right buttons to push for initiating sex is essential. Maybe your guy enjoys a specific type of foreplay or sexy lingerie. Many guys don’t need much, but it doesn’t hurt to ask.

It’s also helpful to discuss turn-offs for both of you. Some men love seeing their lover walk around in sweatpants and his t-shirt. For others, not so much.

You might assume that if a guy is dating, he believes in love and falling in love. It turns out that many guys do, but it’s more about showing love in a masculine way than receiving it.

Or it may be about receiving it but not showing it.

Some men are jaded after a series of bad relationships and believe love is a fairy tale. Do his beliefs jibe with yours?

6. Are you looking for marriage?

It might seem too early to ask this question, but if marriage is your goal, a few dates in isn’t too soon to find out. Your time and energy are as valuable as his, so find out if he’s marriage-minded too.

Some guys want a serious, long-term relationship but without the paperwork, ceremony, or forever commitment that comes with marriage.

7. How do you feel about friends of the opposite sex?

This question relates to a  topic that can inspire jealousy issues and is another essential subject to discuss.

If one partner has close friends of the opposite sex, can the other accept that without insecurity and jealousy? You may also want to discuss whether either of you remains friends with an ex and how you feel about it.

8. Do you want children someday?

One of the major problems between couples is that they can’t agree on having children. Sometimes, one ends up (perhaps unhappily) agreeing to the other’s wish only to feel resentful.

Some people are neutral and don’t start thinking seriously about it until they’re in a committed relationship. But if you know you do or don’t want kids, you must talk about it early in dating since it’s a dealbreaker for many people.

Many guys (but not all) have a high sex drive, especially compared with most women. You’ll want to know how many times a week your guy prefers to have sex and if his sex drive meshes with yours. Is there an “ideal” number of times or even a “minimum” number?

10. What’s your favorite feature of a woman?

Many guys focus on specific physical features of women, such as eyes, lips, or parts of the body. They may focus less on inner qualities such as confidence or a sense of humor.

Will you feel objectified if he’s too into your looks and body? Or does it make you feel adored when he’s all about your beauty and desirability?

Some guys don’t care much either way about makeup. What matters more to them is that their woman dress or style herself with him in mind.

Still, it’s good to find out if your guy has an opinion as far as “too much” or “not enough” makeup goes.

12. Do women’s periods make you uncomfortable?

Menstruation (and related questions about it)  can be a messy and uncomfortable subject for some men. You may wonder if it’s okay for you to ask your guy to buy menstrual products for you once you’re in a committed relationship.

You may also want to discuss sex while you’re on your period and how both of you feel about it.

13. What is essential for sexual compatibility?

Feeling physical attraction to someone doesn’t necessarily translate well to the bedroom. Pick your guy’s brain and ask what he makes that attraction extend to lovemaking.

Discuss what both of you need or desire when it comes to sex. Of course, you’ll learn more about your sexual preferences over time and with experience being together.

You’ve likely already gotten a first date out of the way and are looking forward to more. The first date is about getting to know each other and discovering if there’s chemistry.

But a perfect date is about having the ideal romantic time together. Your guy’s thoughts on it can reveal a lot about how he’d like to best spend time with you.

15. Is a girl being a virgin important to you?

While it’s no longer a common issue among couples in today’s sexually active culture, some guys are still looking for virgins.

Others don’t care so much about virginity but still don’t feel comfortable with a woman who has had many sexual partners. His opinions may feel judgy and hypocritical to you, especially if he’s been with plenty of women.

Find this out early before you get too emotionally involved.

Some guys only enjoy gift-giving during the holidays, while others enjoy them anytime. If you’re big into giving or receiving gifts, you don’t want to find out afterward that your guy isn’t a gifty person.

17. Do you celebrate holidays?

18. Is it okay for girls to pursue guys?

Traditionally, men pursued women and initiated dating. However, today many women take the initiative and ask out a guy they like.

A woman may initiate the first sexual encounter as well. You’ll want to know if your guy is okay with you ever making the moves or calling him for a date.

Modern technology is so popular that it’s common to see people glued to their phones, even while on dates. That doesn’t mean your guy would be okay with you being on yours, though.

Discuss whether phones should be on silent or if just occasional checking won’t disturb your dates.

Some guys will have “guys night” with their friends and may not want to be contacted while they’re busy.

You shouldn’t feel offended because spending time apart is a good thing, and you’ll show him that you’re considerate of his time with friends.

21. Do you have a clothing preference for girls you date?

Most guys don’t know much about fashion, whether brand names or specific styles. But guys do have opinions on what they think looks very attractive or looks best on girls, such as casual jeans, high heels, skirts, or sexy dresses.

22. What do you consider promiscuous behavior?

This question isn’t about how many guys you’ve slept with but about coming off as promiscuous. Judgment of revealing clothes, having any or too many guy friends, wearing too much makeup, or getting drunk at bars or clubs can be the difference between a fling and a serious relationship with your guy.

23. Can you forgive cheating?

Cheating is a major problem in relationships. It’s not only because of the behavior itself but also about the reactions of partners who have been cheated on. For some guys, it’s totally unforgivable.

And some guys have a stricter definition of what “cheating” is than simply having sex with someone else. So asking your guy what considers cheating to be is essential.

There’s more to a relationship than simply feeling attraction or sexual chemistry. You need to have things in common. It doesn’t mean you have to enjoy football, video games, or cars, but allowing him to talk about his passions shows him you care.

25. Is taking too long to get ready a pet peeve for you?

Some girls are notorious for taking a long time to get ready. It can become an issue when most guys just throw on their clothes and are stuck waiting around for their girlfriend.

Asking this question shows that you’re willing to find a solution or compromise.

26. What do you do if you’re not interested in a girl?

Some guys are shy and won’t make the first move, or they’ll message you every few days. But how do you tell if he’s lost interest?

Ghosting you or ignoring you for long periods are sure ways of subtly letting you know he’s no longer interested. Is that his modus operandi? If so, are you ok with that?

There’s nothing wrong with messaging your guy, but everyone has a preference on how much contact they want.

Too much can feel suffocating and overwhelming and distract your guy’s attention away from work and other things. There’s often a happy balance where you two can have a daily conversation.

As you can see, you are not alone in having many unique questions for your guy. The chances are that your guy has been asked some of them before by other girls or by friends. Most importantly, he’s likely to have thought about them without ever being asked.