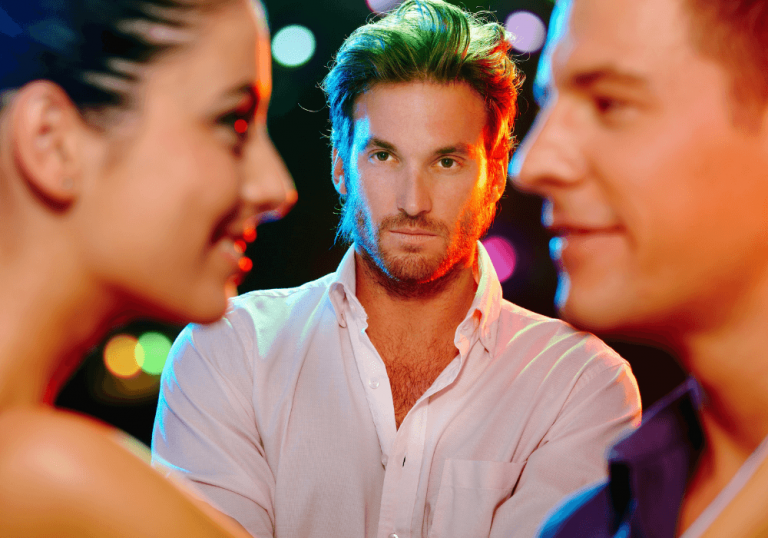 As you socialize with men, you might try to figure out who’s romantically interested in you. “What are the obvious signs that a guy likes you?” you might ask yourself.

The answer is multifaceted, but jealousy can definitely mean that he desires you intensely.

His jealous actions reveal that he wants to chase away rivals for your attention.

However, interpreting his behavior is not a simple matter.

Men can show jealousy in many ways, and some of them are not very obvious.

Jealousy in a man indicates that he feels threatened when someone that he perceives as a rival appears to be winning your approval.

If he admires you and hopes to date you, then he cannot avoid feeling upset when someone else distracts you from him. In an attempt to woo you away from a rival, he may display many signs he is jealous.

Some signals may be clear, but others may not make much sense. Many men are utterly flummoxed about how to communicate romantic interest to women.

Fear of rejection is a huge issue, but so is the fear of making a mistake. Men have to navigate a world where some of them offend women with inappropriate behavior.

Many gentlemen struggle to enter romantic conversations with women because they don’t want to be perceived as creepy.

15 Signs a Guy Is Jealous and Likes You

Despite the vexing delicacy of sparking romance, men will still feel jealousy when women who interest them turn their attentions elsewhere.

Learning to spot the ways that men show jealousy could help you know when someone likes you. With this skill, you might avoid overlooking a great guy.

1. Acts Disinterested When You Talk About Other Men

This one can be hard to detect. Some men just don’t say much regardless of the circumstances. However, if you notice that a male friend becomes noticeably less chatty when you mention another man, his silence will speak volumes.

What he’s really trying to do with his one-word answers is contain his feelings. He may not feel ready to reveal his interest in you, but listening to how you did this or that with someone else is stabbing him inside.

You may think of him as just one of your male friends, but he’s secretly hoping to be more than that.

2. Shows Off Around You

How can you tell if a man is jealous? Watch what he does or says after another man in your presence impresses you. The jealous guy will be hell-bent on impressing you more.

When men are vying for female attention, they will spin stories about their lives that make the mundane seem heroic. Even if he’s just delivering pizzas, he’ll make it sound like he narrowly survived a “Mad Max” dystopia.

Whatever the situation, he’ll try to show that he can lift more weight, make more money, win more video games, or that all of his adventures are uniquely exciting.

This sign is obvious. Some men are men of action, and a jealous guy can go on the offensive when he sees that you find someone else captivating. He could give you gifts and ask you out on dates.

He might leave flowers at your door or send a gift basket to your work. If you say that you’re dating another man right now, he may explain how he’s a better choice for you.

When a guy launches a campaign meant to attract you, he can come across as desperate. In all honesty, he probably feels desperate. He does not want to miss his chance to win your heart. He may have been waiting in the wings for a while, but his jealousy has motivated him to stop wasting time.

This behavior can be sweet, but the situation will be awkward if you don’t share the same feelings for him.

4. Jumps at the Chance to Help You

If the wind blows your hat off at the park, he’ll dive into a pond to fetch it for you. This guy is watching for any little opportunity to interact with you. If you work together, he’ll offer to grab you a coffee or sit through completing that tedious software update while you take a break.

If he hears that you’re moving into a new apartment, he’s going to be thrilled to have a chance to move your six-foot-tall solid oak antique wardrobe.

Jealousy enters this equation because he is worried that you’ll turn to someone else for help. He doesn’t want other people to win your praise. He wants to be your hero.

5. Flirts With Others at a Party

Among signs he is jealous, this one can be the most baffling. When he sees you enjoying the attention of another man at a party, he might try to bury his jealous feelings by acting like they don’t exist.

He’ll flirt with a different woman to prove that he isn’t interested in you.

If he had expected to have your company at the party, he might be retaliating against your choice to hang out with other people.

He may be hoping to make you feel jealous when you see him with another woman. Maybe you will, but this is a foolish gamble. You’re just as likely to think that he sees you as just a friend.

You’ll want to consider this potential sign of jealousy alongside other behaviors because flirting with others is confusing. However, if he shows other signs of jealousy in a man around you, then you could be the one he wants the most.

6. Blows Up Your Phone

Has he been sending you more and more texts? Does he often call right after you respond to a text?

An escalation of phone contact indicates that he’s thinking of you more and more. His jealousy is kicking in because he’s wondering what you’re doing and who you’re with.

Within an established love relationship, being clingy through the phone is a sign of distrust. However, prior to dating, a man who hogs your phone time is working hard to hold your attention.

His jealousy tortures him with the thought that you’ll drift away if he doesn’t maintain contact and hopefully get you to commit to plans with him.

Every time that you respond, he feels a wave of pleasure and relief that you’re still interacting with him.

7. Follows You Closely on Social Media

A man obsessed with you will want updates about you as frequently as possible. His jealousy makes him needy for confirmation that you’re not falling in love with someone else. He also wants to learn as much about you as possible.

Social media stalking can get creepy, but a regular nice guy driven by jealousy might not cross any lines. He’s the first one to give you thumbs up or smiley faces or leave a friendly comment.

If you use more than one social media app, check to see if he’s connected with you on all of them. When he’s following you everywhere, you can assume that he likes you.

8. Avoids Answering If You Ask About His Feelings

All right, this applies to most men. However, if you’re asking him if he’s upset about something that you did and he shrugs it off, then he could be struggling with jealousy.

He was upset when you spent time with someone else, but he’s not going to admit it. He doesn’t want to reveal that you have such a strong influence on his happiness.

27 Top Signs Of An Unhealthy Relationship

Am I In Love? 31 Undeniable Signs You Are

9. Talks About His Rivals

Does he actually raise the subject of the other men in your life? Does he casually ask if you’ve run into so-and-so lately? He’s fishing for information because he’s jealous.

When he does talk about the other men who interest you, he may negatively frame them. He’ll want to drop a comment that makes them look bad.

Jealousy can provoke sadness, anger, and fear. Any of those emotions can make people do strange things.

Whatever you perceived as an overreaction on his part could have been an honest display of how much he wishes he could be with you.

Next time you’re around him, check to see how often his eyes are on you. If he likes you, then he’ll be watching you closely and anyone near you.

12. Magically Pops Up in Your Day-to-Day Life

If he hears that you shop at a certain market in a certain neighborhood, then you may suddenly start running into him when you go to buy eggs. He might join the gym you go to or adopt an interest in bird watching because you mentioned that you belong to a local birding group.

When a man likes you, he might do quite a bit of sleuthing so that he can learn how to cross paths with you more often. Jealousy might motivate this behavior on top of his romantic interest if he’s concerned about other men making a move on you.

Young adults tend to have large friend groups of males and females. This is quite normal. A man who likes you might enthusiastically embrace the chance to be “bros” with your male friends.

This is the famous “Godfather” move of keeping your enemies close. He may genuinely like those men as long as they don’t try to date you because he’s hoping to move into that position. His proximity to your male friends gives him a chance to limit their alone time with you.

14. Rude to the Rivals for Your Attention

Instead of befriending male rivals, men sometimes decide to drive them away. They may be unpleasant to the other men in your life.

He may confront them about behavior that he thinks makes them unworthy of your attention. Driven by his jealousy, he hopes to discourage other men from being near you because they don’t want to deal with his hostility.

15. Decides He Is Your Bodyguard

Body language signs he is jealous can be huge clues that a guy likes you. He may hesitate to express his interest in words, but he has decided to be a human buffer between you and other men. Watch for him to move in whenever you give your attention to others.

Jealousy Is Natural But Should Not Be All Consuming

Jealousy boils down to protecting what you perceive to be rightfully yours or what you wish was yours. A guy who likes you can show multiple traits of jealousy. To some extent, it can be quite sweet because his intense feelings show that he views you as special.

However, you have to be wary of someone who displays extremely jealous behavior. Dating involves equal measures of passion and restraint. If love blooms, he should grow to trust you and feel secure in your commitment to him.

His signs of jealousy should mellow once a romantic relationship develops. If his jealous behavior intensifies after you get together, his insecurity could create an overwhelming urge to control you.