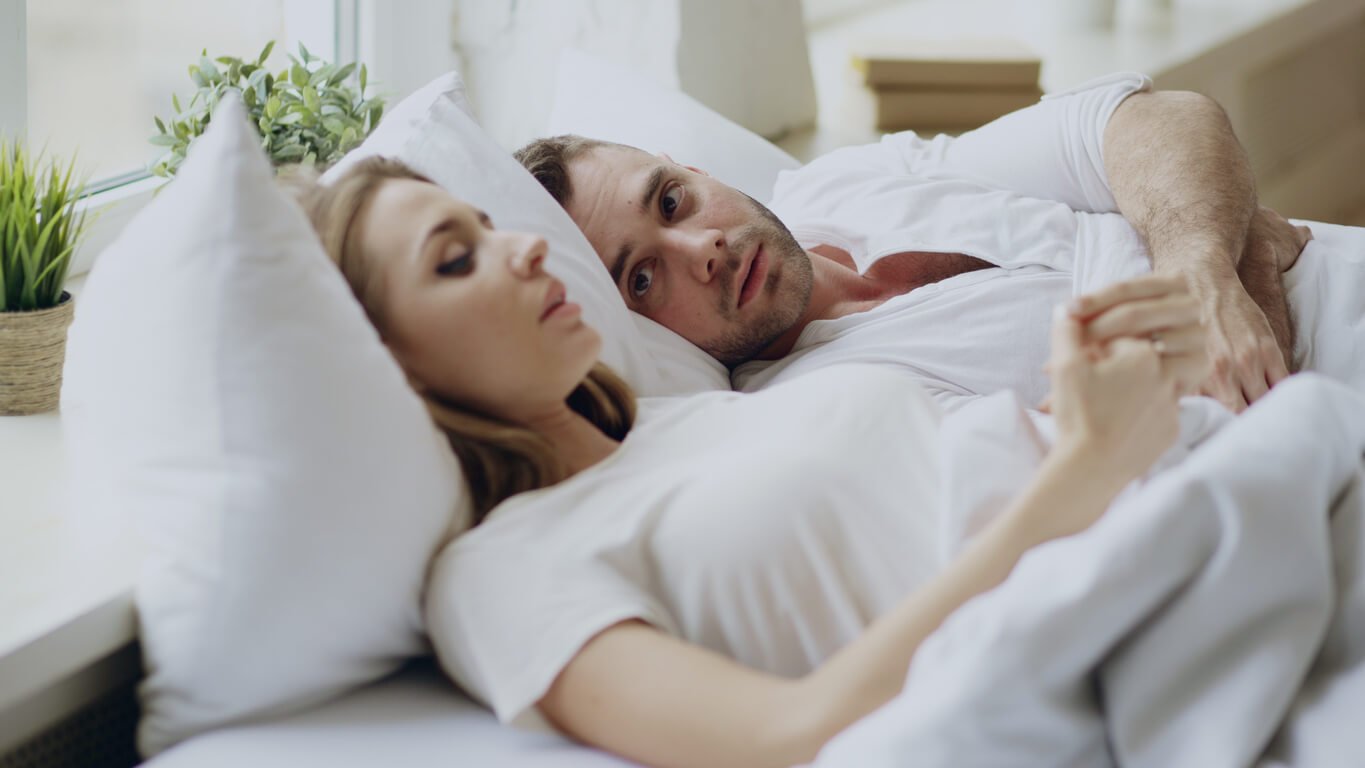 After all, we’re told that men have uncontrollable sexual urges.

So when a guy doesn’t try to sleep with you when you’re ready, the rejection can sting.

The question,“Why is he waiting to sleep with me?” plagues your thoughts.

But the biological and social truth of the matter is a lot more complicated.

Despite what a certain insurance company may have you believe, male psyches have come a long way since the stone age, and there are many viable reasons why someone with the XY genotype may not want to sleep with you.

And more importantly, they’re not all bad!

So today, we’re counting down 13 reasons he could be turning you down in the bedroom — for now.

What Does It Mean When a Guy Doesn’t Want to Sleep with You?

It isn’t necessarily a bad thing when a man waits to sleep with you. Though it may be difficult, try not to jump to conclusions that trigger negative self-talk.

Sometimes religious beliefs are behind the decision, or maybe he’s very inexperienced and nervous about getting intimate.

The bottom line is that you shouldn’t take it personally.

When a Guy Doesn’t Want to Sleep with You: 13 Reasons He’s Holding Back

We’ve broken down our list into two sections: 1) reasons a new boyfriend may not want to sleep with you and 2) reasons why your long-term boyfriend or husband may stop wanting to have sex.

You’re at a loss. You’ve been on several dates, and you’re ready to seal the deal, but he is not making a move. So you find yourself asking, “My new boyfriend doesn’t want to sleep with me! Why not!?”

It could be one of many things.

1. He’s Hurting and Not Ready

No matter who you are, broken relationships hurt. Often, people start dating before they’re truly ready in a futile attempt to get over their exes. But sex drive can suffer during this period because intimacy is still tied to loss in their thoughts.

Dating someone on the rebound is fine. But don’t lie to yourself about where the relationship can go. Because more often than not, these types of interregnum connections don’t end up lasting.

Of course, there are exceptions, but it’s healthy to remain realistic about what’s probable.

2. Stress and Depression Are Hampering His Sex Drive

Stress, anxiety, and depression can wreak havoc on a person’s nervous system and sex drive. Moreover, depression, stress, and anxiety aren’t always evident. Someone may present as the happiest person in the universe and suffer inside.

If a new guy you’re dating is giving off signs he doesn’t want to sleep with you but seems happy otherwise, then it could be something deeper. He may be going through hell at work. One of his parents may have just been diagnosed with cancer.

The possibilities are endless. And since your relationship is still new, he may not be ready to share.

3. He May Want a Serious Relationship With You

For some people, casual sex is reserved for casual relationships. When these folks find someone they genuinely enjoy and see a future with, they may opt to put intimacy on the back burner in favor of building a deep connection first.

In these instances, not sleeping with you is a sign of affection, not rejection.

4. He’s Getting It Somewhere Else

There’s always the possibility that your new man isn’t as “free” as he pretends. Granted, most cheaters are looking for sex and not emotional connections.

But some people just want to let loose without their spouse or long-term partner. In these situations, he’s not interested in sleeping with you because he’s getting it somewhere else.

Another possibility is that “Prince Charming” is dating you for your money, status, or connections, isn’t attracted to you, and has a side piece. Fortune hunters aren’t confined to “Downton Abbey” plots, ladies! It happens in real life. So be careful out there, queens!

Pre-martial sex is mainstream these days, but there are still people out there who don’t believe in it. Religious restrictions are probably something you should discuss early on in the relationship.

After all, if your end goal is marriage or a committed relationship, there’s little point in dating someone with wildly different worldviews.

6. He’s Not Attracted To You

We’re positive that you, dear reader, are one sexy beast. But hey, everyone isn’t attracted to everyone else. Even the “most beautiful women in the world” are dumped and rejected. After all, you probably know objectively attractive people that do nothing for you.

Typically, we know when someone isn’t feeling our vibe. Pay attention to the clues. Is he always looking around when you’re out together? Does he barely hug or kiss you when you’re saying goodnight? If he’s just going through the motions, cut your losses before getting too attached.

7. He Wants To Keep Things Casual

People date for different reasons, and sometimes folks are simply looking for pleasant companionship with someone they enjoy looking at under restaurant lights. Maybe they don’t have time to commit to a serious relationship, and instead of complicating things with sex prefer to keep things light and simple.

Performance anxiety is a real thing, and many guys deal with it. If this is the only thing standing in your way, there are techniques the two of you can try together to break the ice. The key is to avoid making him feel inadequate or emasculated.

9. He May Be Asexual

Human sexual prowess, like sexual preference, expresses itself along a spectrum. Some people have hyperactive sex drives, and other folks barely any. If a guy shows no signs of wanting to sleep with you, he may be asexual.

This is another thing that should probably come up sooner rather than later. However, we urge you to look up asexuality before making a snap judgment about the relationship’s possibilities.

Plenty of asexuals enjoy cuddling, and some even engage in sex. It just takes a bit more time to become intimate, and the experience may be different.

Write An Emotional Letter To Husband To Help Smooth The Bumps

Now let’s dive into reasons why your husband or long-term boyfriend may suddenly lose the urge to sleep with you.

10. He Started a New Medication

Medication can affect a body in myriad ways, and many men experience a host of sexual hurdles because of pharmaceuticals. If you and your partner find yourself in this situation, make an appointment with the doctor.

Often, it’s just a matter of changing the prescription.

11. He’s Sleeping With Someone Else

Unfortunately, some men stop sleeping with their spouses when they start having affairs. If nothing else has changed with his health or life, infidelity may be the root cause of his sexual downturn at home.

However, don’t jump to conclusions. He may be going through a midlife crisis or experiencing erectile dysfunction and is embarrassed to say so.

Sadly, it happens all the time. People who were once infatuated with each other simply fall out of love — and lust. Passion and fire are replaced with platonic admiration and friendship.

Some people enjoy transitioning into this relationship phase and live together in nonsexual bliss. Other people need an active intimate relationship, so this is where they part ways.

Libidos fluctuate over lifetimes, and age often slows our drive. That’s not to say that mature people don’t enjoy sex — but the frequency sometimes dwindles. In these situations, it’s always best to talk openly and honestly. If you don’t want to slow down, medicinal options are available.

How Do You Make Him Sleep with You (Or at Least Make Him Want To)?

Some reasons for not wanting to sleep with another individual are non-negotiable. In those cases, count your losses and say your goodbyes. But if the problem is rooted in something surmountable, you can try the following:

The bottom line is that sex is a consensual act. If one party isn’t feeling it, then let it be.

But if both parties are game, and your lack of intimacy is simply a communication problem, be bold!

Make your willingness known. It’s the 21st century; we’re no longer tethered to antiquated rules — so get out there, be safe, and enjoy yourself, ladies!