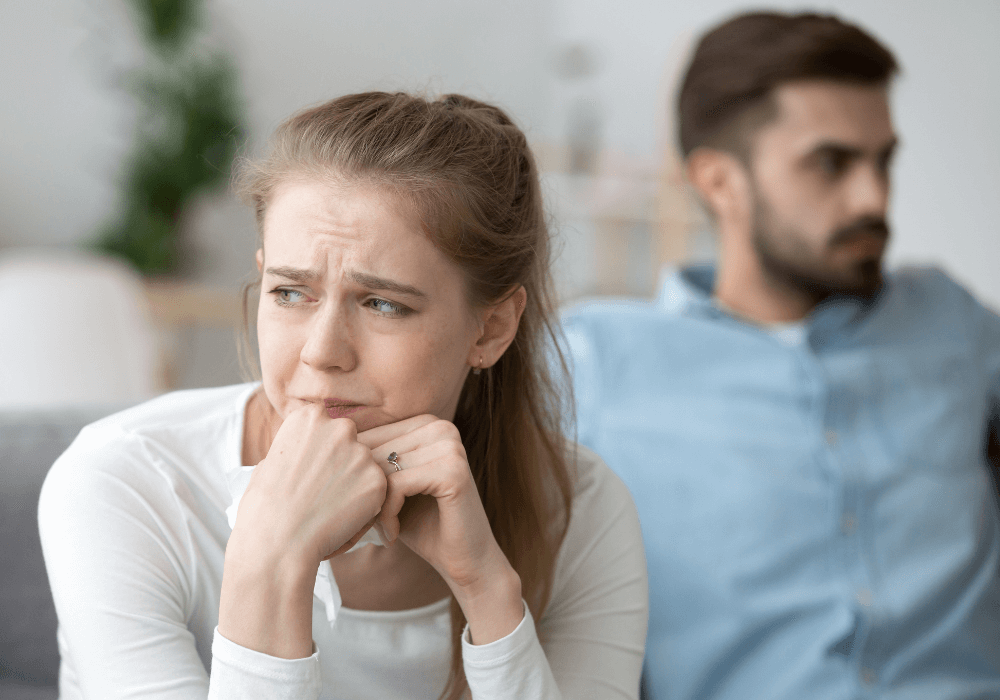 No matter how you spin it, marriage is challenging.

Even if you love one another to the moon and back, you’re still bound to face difficulties with your husband over the years.

But sometimes, your husband can say and do deeply hurtful things.

By ignoring or neglecting you, your husband shows he’s taking you for granted.

Over time, his neglect can leave you broken-hearted and numb.

It’s hard to express how profoundly it hurts when your husband doesn’t respect and cherish you.

Maybe seeing these quotes will help validate your feelings and give you the courage to take action.

[Side note: In this online course, learn healthy communication skills and build the intimacy you’ve always wanted in your relationship.)

We’ve divided these quotes into three sections to help you identify where your husband is not living up to his marriage vows.

Read through all of the quotes, select the most relevant to your situation, and then consider using them in the following ways:

Has your husband neglected you and put other people and activities ahead of spending quality time with you? Has he acted as though you’ll always be around so he can put off focusing on your needs?

These “wife feeling neglected by husband” quotes will show you that you aren’t crazy and that you deserve better — much better.

1. ”Loneliness is not lack of company, loneliness is lack of purpose.” ― Guillermo Maldonado

4. “If a man, who says he loves you, won’t tell you the details of a private conversation between him and another woman you can be sure he is not protecting your heart. He is protecting himself and the women he has feelings for. Wise women simply see things as they are, not as their low self-esteem allows.” ― Shannon L. Alder

5. “Something my dad says…He says you end up marrying the one you don’t understand. Then you spend the rest of your life trying.” ― Fredrik Backman

6. “A man will admit his wrongs and try to fix them. A boy will find excuses and constantly blame you for why he’s hurting you.” ― Unknown

7. “Your spouse is not a possession you attain, but a friend in which you trust and adore.” ― Robert Vanleeuwen

8. “Sorry is not enough. Sometimes you actually have to change.” ― Unknown

9. “If your husband neglects you, he doesn’t deserve you.” ― Unknown

10. “There is nothing lonelier than being in a marriage feeling unseen by your husband. You feel like a ghost in your own home.” ― Barrie Davenport

12. “A good marriage is supposed to be one where each spouse secretly thinks he or she got the better deal.” ― Anne Lamott

13. “What kills love? Only this: neglect.” ― Jeanette Winterson

14. “Never make the one you love feel alone, especially when you’re right there” ― Unknown

16. “Never allow someone to be your priority while allowing yourself to be their option.” ― Marc and Angel

17. “Neglect cannot exist with love in a marriage. If you’re neglected and taken for granted, you’re not loved.” ― Barrie Davenport

18. “Even the most intense feelings cease when neglected and taken for granted.” ― Anupama Garg

19. “I was always just a supporting cast member in my husband’s life. His attention turned to me only when I was attending to him.” ― Unknown

20. “Sometimes I get real lonely sleeping with you.” ―Haruki Murakami

21. “I will never regret you or say I wish I’d never met you. Because once upon a time you were exactly what I needed.” —Bob Marley

As time goes on, your husband’s neglect will take its toll on your psyche and your heart. Every time you try to connect, and he brushes you aside, it feels like a blow.

You are left with a fractured heart that soon may be broken beyond repair. If only he’d get the message before it’s too late.

23. “The pain of yesterday is the strength of today.” ― Paulo Coelho

25. “Relationships are like glass. Sometimes it’s better to leave them broken than try to hurt yourself putting it back together.” ― Unknown

26. “It’s amazing how someone can break your heart and you can still love them with all the little pieces.” ― Ella Harper

27. “Silence is a woman’s loudest cry. You can always tell she’s really hurt when she starts ignoring you.” ― Unknown

29. “Be careful what you say. You can say something hurtful in ten seconds, but ten years later, the wounds are still there.” ― Joel Osteen

31. “When you hurt the one you love, you are bound to hurt yourself.” ― Unknown

32. “If you spend your time hoping someone will suffer the consequences for what they did to your heart, then you’re allowing them to hurt you a second time in your mind.” ―Shannon L. Alder

33. “The human heart is the only thing whose worth increases the more it is broken.” —Shakieb Orgunwall

34. “There comes a time in your life when you have to choose to turn the page, write another book or simply close it.” ― Shannon L. Alder

35. “Nothing hurts more than realizing he meant everything to you and you meant nothing to him.” ― Unknown

36. “Someday you’re gonna look back on this moment of your life as such a sweet time of grieving. You’ll see that you were in mourning, and your heart was broken, but your life was changing.” —Elizabeth Gilbert

37. “Do not look for healing at the feet of those who broke you.” ― Rupi Kaur

38. “You cannot really get married by mistake. You can only marry the wrong p8rson.” ― Mokokoma Mokhonoana

39. “A broken heart is the worst. Nobody can see it, but it hurts every time you breathe.” ― Unknown

41. “You married him because he promised to love, honor, and cherish you. When all of those promises are broken time and again, you are left with a broken heart.” ― Barrie Davenport

42. “It is not a lack of love, but a lack of friendship that makes unhappy marriages.” ― Friedrich Nietzsche

43. “The shattering of a heart being broken is the loudest quiet ever.” ― Carroll Bryant

44. “Having your heart broken by the one you love the most can be like a thousand paper cuts or one massive and decisive blow. Either way, the pain is profound.” ― Barrie Davenport

45. “There are many ways of breaking a heart. Stories were full of hearts broken by love, but what really broke a heart was taking away its dream—whatever that dream might be.” ― Pearl S. Buck

46. “No matter how hard your heart is broken, the world doesn’t stop for your grief.” —Faraaz Kazi

Does Your Husband Turn Everything Around On You?

15 Examples of Manipulative Statements in Relationships That Are Hurtful

You thought you couldn’t be hurt worse than being neglected, but now he’s ignoring you altogether. It’s as though you’ve become persona non grata with the person who’s supposed to love you most.

You’re two ships passing in the night, and no matter how hard you try to win his attention, he just can’t be bothered.

47. “After marriage, a woman’s sight becomes so keen that she can see right through her husband without looking at him, and a man’s so dull that he can look right through his wife without seeing her.” ― Helen Rowland

48. “I still believed he’d love me again somehow, love me that intense, thick way he did, the way that made everything good.” ― Gillian Flynn

49. “Ignoring is a passive-aggressive way of dealing with a chronic relationship problem. When your husband ignores you, no matter if it’s all the time or just after arguments, he is trying to avoid and run away from a problem instead of dealing with it and solving it.”  ― Lisa Penn

51. “It’s weird, marriage. It’s like this license that gives a person the legal right to control their spouse / their ‘other half.” ― Jess C. Scott

52. “Most men do not have the balls to help their women to not need them.” ― Mokokoma Mokhonoana

53. “The husband who doesn’t tell his wife everything probably reasons that what she doesn’t know won’t hurt him.” ― Leo J. Burke

54. “If you’re turning yourself into a pretzel to win his love and attention, you’ve already diminished yourself. You’ve already lost whatever love he said he had for you.” ― Unknown

55. “What’s worse than being hated is being ignored, because it’s like you don’t exist at all and your presence is nothing.” ― Anurag Prakash Ray

56. “It would be too easy to say that I feel invisible. Instead, I feel painfully visible, and entirely ignored.” ― David Levithan

57. “The demise of marriages begins with a growing absence of responsive intimate interactions. The conflict comes later.” ―Sue Johnson

58. “While it is better to be loved than hated, it is also far better to be hated than ignored.” ― Viet Thanh Nguyen

59. “You’re ignoring me so loud that it’s deafening. This silence is so deep that it’s echoing.” ― Anna Jae

60. “Indifference and neglect often do much more damage than outright dislike.” ― J.K. Rowling

61. “I think I owe you the time you wasted in ignoring me.” ― Nitya Prakash

62. “Really, what is more important in a man’s life than his wife? His work? His kids? His hobbies? If you’re not number one in your husband’s life, your soul will begin to wither and fade away.” ― Barrie Davenport

If these quotes reflect some painfully familiar situations and emotions, here’s hoping they will also inspire you to take action to address the issues and work on your marriage.

Or, if things seem beyond repair, perhaps these emotional husband-wife quotes give you the courage to move on and find someone who treats you with more love and respect.