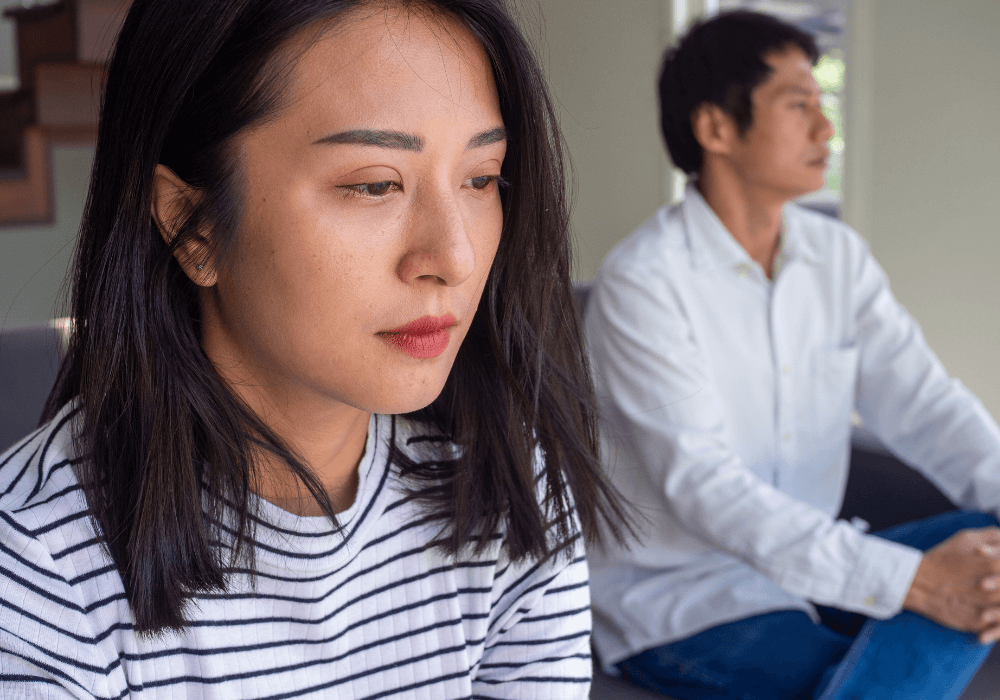 When your husband doesn’t love you, you can feel it every time you’re in the same room together.

You see it in the way he looks at you (when he actually does).

And it hurts every time — especially if you still love him.

How did it come to this?

And how do you figure out what to do when your husband doesn’t want you anymore?

How Do You Know If Your Husband Is Still in Love with You?

If you’re at the point where you’re asking, “Does my husband love me?” you’ve probably already tried some things to gauge his response.

You’ve noticed some things that used to draw him closer to you now push him away.

He’s shut you out, and you don’t know why.

You might already be thinking, “My husband doesn’t love me anymore,” and looking for evidence of that.

While some things can be interpreted differently, depending on the context, we’ve identified 31 signs that point to something more serious than a bad mood.

31 Signs Your Husband Isn’t In Love With You

Read carefully through each of the signs your husband doesn’t love you, and make a note of the ones that stand out.

Create a list of your own to keep handy if your husband agrees to couples counseling.

It may come in handy for other things, too.

It’s been forever since he’s said the words, “I love you,” — or at least said them in a way you know he means it. If you say “I love you” to him, he may mechanically repeat it back to you, but you feel there’s little or nothing behind the words.

2. He doesn’t try to start conversations with you.

He doesn’t initiate conversations with you anymore. If you seem bothered by something, he’s more likely to avoid you than to ask about it. Maybe he used to try to get you talking, but now he visibly tenses at the sound of your voice.

3. He shows no interest in what you do.

He doesn’t seem remotely curious about what you did while you were apart. He did his thing, and you did yours, and that’s enough for him. Whatever you did with your time is not something he really cares to know. So, he doesn’t ask.

4. He doesn’t pay you compliments anymore.

You can’t remember the last time he gave you a genuine compliment. Even when you accomplish something you’re proud of or dress nicely for a special occasion, he either says nothing or mutters something that sounds more like an insult.

Your anniversaries and birthdays are nonevents to him, or so it seems. He doesn’t remember any significant dates unless there’s something in it for him. And even then, if he can avoid including you, he does. Ask him why and he’s more irritated than apologetic.

He answers your questions evasively if he answers them at all. If you notice him looking bothered and ask him about it, it’s “nothing,” or he doesn’t want to talk about it—not with you, anyway. You don’t remember the last time he confided in you.

7. He slips passive-aggressive digs into most conversations with you.

Try to talk to him about a shared interest, and he finds a way to work in a passive-aggressive comment. And it stings. He never used to do this with you—or you haven’t noticed until now. Question him about it, though, and he takes offense.

8. He doesn’t hug or kiss you anymore (or not voluntarily).

He never spontaneously offers a hug anymore. And as for a kiss, if you ask him for one, he might oblige, but he doesn’t seem to enjoy it.

It’s just a thing he’s doing out of a sense of obligation. So, you’ve stopped asking.

9. He doesn’t bother trying to get you in the mood, either.

Forget about passion and romance. If he seems indifferent to kisses, he’s either ambivalent about sex or just going through the motions when you’re together. It’s all about the gratification, with little if any interest in connecting with you.

10. He resists or complains when you ask him to do something for you.

Even if he grudgingly agrees to it, he doesn’t often follow through. And when he doesn’t, he always has an excuse. He just doesn’t want to make an effort anymore. And you wonder when you stopped being worth it to him.

If you want to do anything with him, it has to be what he wants to do. Your wants and needs take a back seat to his.

If he ever asks what you want, he seems put out if your desires don’t match his. He sees it as further proof you’ve grown apart.

12. He’s not interested in going out on dates with you.

Maybe you used to have regular date nights, but at some point, you stopped. Life got in the way, and both of you found other things to do with your time—or at least he did. And he’s not inclined to make time for it again.

You’ve noticed he’s more friendly, easygoing, and generous with other people than he is with you. When you’re alone together, he’s back to being sullen and silent or argumentative. You rarely hear a kind word from him.

14. He doesn’t seem to notice or care when you’re sick or hurting.

He might ask what’s up with you if your being sick interferes with serving his needs. But if you’re feeling ill or suffering in some other way, he’d just as soon leave you to that. He won’t change his plans to be there for you.

If he even notices your absence, it clearly doesn’t bother him. You could be stuck at work for an extra few hours, and he wouldn’t even call or text to check on you. And he barely acknowledges you when you show up.

16. In fact, he seems disappointed when he sees you.

Your eyes meet, and if he had a smile on his face before, it fades as he takes notice of you. He had plans, after all.

And they don’t include you. You can’t remember the last time they did.

You wouldn’t believe it if it weren’t for the fact that his friends and family have noticed the same. When you’re around—and especially when you’re close to him—he’s a different person. He’s more pleasant to be around when you’re not there.

18. He doesn’t bother trying to look good for you.

You don’t expect him to dress up for you every day—nor would you do the same for him.  But when you dress for a special occasion, it’s more than a little deflating when he doesn’t bother changing out of his loungewear.

19. Even if he can afford better (for himself), he’s a cheapskate when it comes to you.

If you’d like a glass of wine, he orders the cheapest stuff they have. If you’d like to try something other than your usual, he complains if it costs more. Yet, he doesn’t hesitate to splurge on his own food and drink.

20. Everything you do or say irritates him.

The two of you used to laugh together and talk for hours. Now, everything that comes out of your mouth either offends or irritates him. Every attempt at humor backfires. Every kind word earns a scornful look or roll of the eyes.

He seems allergic to your company. And trying to engage him in conversation is one of the quickest ways to get him out the door. Ask him to spend time with you, and he usually has an excuse ready.

22. He flirts with other women in front of you.

He doesn’t even try to hide it. If anything, he justifies it. Or he gaslights you when you confront him. He can’t help it if you see every conversation with another woman as flirting. He takes offense and blames you for being “paranoid.”

23. You could flirt with everyone else in the room, and he wouldn’t care.

He shows zero interest if you turn the tables and flirt with other people right in front of him.

He might use that against you later, but he doesn’t try to keep you all to himself. He might even encourage you to get acquainted with someone who looks like your type.

It’s all your fault for not trying hard enough, for not doing enough for him, for not being the same person he fell in love with, for trying to change him, for not presenting a “united front” with your kids (by doing things his way all the time), and so on.

Maybe he used to focus on what he loved about you, but now he’s fixated on all the things he doesn’t like, whether it has to do with your personality, your looks, or your choices. And he’s quick to remind you how those perceived “faults” have damaged your relationship.

26. He criticizes you in front of other people.

He doesn’t bother putting on a front when other people are around. If he has a problem with something you’ve said or done, he’ll openly criticize you in front of everyone. And he can always find something to use against you.

27. He celebrates his wins with other people—not with you.

When something good happens, he’s eager to share the news with friends and at least some of his family—but not with you. You’re more likely to learn about it second-hand.

28. He doesn’t talk about your future together.

He never talks about any plans for the future that include you. He may not be obvious in his exclusion. But if you ask him where he sees the two of you ten years from now (or even five), he answers evasively. He might even suggest separate futures.

29. He floats the idea of divorce or separation.

He brings it up as a possibility to see how you react. If you take offense, he might backtrack a bit and tell you he was just kidding or that he doesn’t know the future. And he can’t say you’ll always be together.

30. He finds a million ways to disrespect you.

Every moment together is an opportunity for him to disrespect you in some way. It’s become such a regular thing that you wonder if maybe this is about more than his not being in love with you. You wonder if he actually hates you now.

31. He badmouths you to your kids.

If he’s stooped this low—trying to poison your own kids against you—it’s time to consider whether divorce might be best for everyone. Your kids deserve better than to be put in that position, even if your husband swears he was “only venting.”

Now that you’ve looked through the signs your husband doesn’t love you, which ones stand out? And what will you do differently this week?