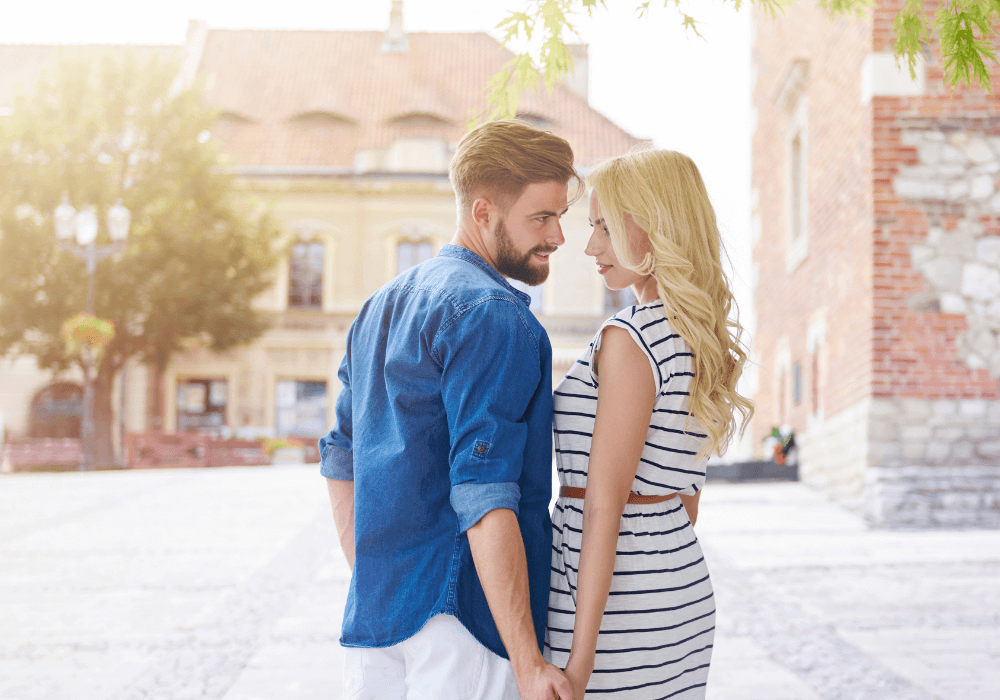 How many different types of love relationships are there? Maybe you can think of a few, but are there really 15 distinct relationship types?

As you’ll see in this post, every type of relationship has something that sets it apart from others. One of these should stand out as the best description of your own — or your most recent love relationship.

While no human relationship is perfect, some are more problematic than others. And every type’s description has something worth keeping in mind.

The relationship types explored in this post make more sense when you know about the triangular theory of love developed by psychologist Dr. Robert Sternberg. His theory was that everyone, throughout their life, experiences varying levels of the following:

In the best relationships, both partners recognize this and show a mutual interest in cultivating all three, even when it’s difficult.

Review the following 15 types of love relationships to see which best describes your own. You may see several types that seem to cover elements of the relationship you’re involved in.

Some of these relationships allow for cultivating Steinberg’s love theory to include intimacy, passion, and commitment. But as you’ll see, others are more dysfunctional or even toxic.

Better understanding the type of relationship you share with your romantic partner helps you navigate your future with this person with more self-awareness, compassion, and mutual respect.

The best of these offer proof that a relationship without sexual intimacy can be compatible and satisfying, especially for two people who don’t particularly enjoy sex.

Asexuals exist. And their asexuality is not a defect or anomaly. The thing that makes them asexual is a lack of sexual attraction — not a complete lack of interest in sex. But some asexuals are sex-averse (i.e., sexual intimacy does not appeal to them).

And the lack of sex doesn’t rob them of a chance to have a mutually satisfying romantic relationship because sex and romance are neither synonymous nor inseparable.

That said, there’s nothing wrong with a truly compatible romantic couple enjoying physical intimacy. When it’s part of a healthy romantic relationship — i.e., not used as a weapon or imposed as a “duty” — it can draw you both closer together.

When the love is real, and the attraction (not just physical but soul-deep) is strong, you have the makings of a compatible relationship. We’re not saying there won’t be challenges. There will be. But if you’ve got a strong foundation, you’ll find a way to overcome them.

Open relationships allow both partners to date (and be intimate with) other people. It’s similar to a no-strings relationship/arrangement, but it may have the outward appearance of exclusivity. Or there may simply be more of a commitment to stay together as a couple.

The success of these relationships depends primarily on whether both parties are equally happy with the arrangement. If one of you wants to be exclusive but the other does not, a break-up is usually the result.

In an independent relationship, you both do your own thing. In fact, you might do very little (if anything) as a couple. You might live together (or not), and you probably do spend some time together.

But neither of you depend on the other for financial or personal support. You’re technically a couple, but there’s no real interdependence there. If you’ve both been in codependent relationships, it might feel like exactly what you need right now.

At some point, if you want more closeness and support, that’s likely to change.

In a codependent relationship, you both depend on each other to function, so separation is likely to cause distress or intense anxiety. You feel incomplete without them, and vice-versa.

You want to be with them all the time. And knowing they feel the same is gratifying — at least until it becomes suffocating.

Someday, when you realize your “other half” is always there, and you can’t ever have your own thing without feeling as though you’re cheating on them, it’s time to re-evaluate.

99 Romantic Things To Do With the One You Love

In this relationship, one or both of you change yourselves to appeal to the other. It’s one person who changes themselves to please the one they want to be with in many cases.

If you’re the chameleon, you’ve probably sacrificed some interests and possibly even a relationship or two to make yourself more pleasing or attractive to your partner.

But at some point, you get tired of always having to pretend you like everything your partner likes and you hate everything they hate. And it becomes absolutely necessary — for your health and well-being — to let go of them and move on.

If one of you is proud of identifying as “the one who wears the pants,” there’s a problem. Neither person in a loving relationship should aspire to be the one who dominates their partner or who has a position of authority over them.

That’s not love. It’s dominion. And you only exercise that over someone you don’t see as your equal. If someone expects unconditional obedience (or any other kind) from you, you don’t have a relationship between two equal partners.

Here’s another situation where you stay together for practical reasons or because one of you is in a dominant role and maintains control over the other. There may be a strong attraction between you, but the love is either one-sided or nonexistent.

Narcissistic personalities create a toxic environment for those with whom they enter into an exclusive relationship. No one benefits from it. Staying together “for the kids’ sake” is likely to backfire since they learn about relationships by watching you.

And, if they survive, they’re unlikely to want what you have.

One of you got into this relationship right after breaking up with someone else or being dumped. And we get it. Why waste time grieving someone you can’t be with when you can get back out there?

You might be thinking, “I need this right now. It’s not everything I want in a relationship, but it doesn’t have to be. We’re just having a good time together.” And maybe you are.

It’s essential, though, that both of you know and are okay with a relationship that isn’t everything you want it to be. At some point, that will come up. And another break-up will likely be the result.

Think of movies based on an agreement between two best friends: “If we don’t find someone before the age of 30, we’ll marry each other.” Except in the movies, they usually end up falling for each other.

In these relationships, you typically get along great as long as neither one complicates things by wanting intimacy more than the other one or falling in love with someone else.

No one should be your last resort. And you shouldn’t be anyone’s either.

This is your typical “no commitment required” relationship. It could be all about hooking up. Or it could be a “friends with benefits” situation.

Maybe you just get along so well it seems archaic to you both to keep it platonic. But you don’t want the restrictions that come with an exclusive relationship. Or maybe they don’t.

Whatever the situation, where there’s no real commitment to each other, it won’t take much to run this relationship into the ground.

Fact is, even in the best relationships, you need some time away from each other. Consider the following examples:

It’s not a sign of relationship trouble if you don’t do everything together. Neither of you is a clone of the other (we hope). So, enjoy your separate interests.

Long-distance relationships are tough. It’s one thing if you’re only separated for a matter of days, weeks, or months. It’s hard enough, but if you know you’ll be together within an acceptable time-frame, it can still work.

But when the long-distance arrangement gets to be too long for one or both of you, the challenges to your relationship may be more than either of you can fix:

In a gold-digging relationship, one partner essentially takes advantage of the other. It’s one-sided exploitation: one is the gold, and the other is the digger.

If you’re the “gold,” you don’t get much (or anything) out of the relationship. You might enjoy the gold-digger’s company, but at some point, you have to acknowledge that the only reason they’re around is that they want something you can give them:

This one’s similar to the gold-digging relationship, but the exploitation is mutual. If you’re thinking, “We have an arrangement that suits us both,” you might be in a transactional relationship.

It doesn’t mean you can’t have a deep mutual appreciation, but your couplehood has more to do with what you can do for each other — or what each of you gets out of it.

For example, one of you gets to be rich, and the other gets to have a gorgeous partner on their arm. In the public eye, you might be the “it” couple. You look good together on paper — but not behind closed doors. And at some point, one or both of you will want more.

Which type of relationship do you have?

Now that you’re acquainted with the 15 types of relationships described above, which one sounds most like your current — or most recent — love relationship? Or how many of these sound familiar?

Every relationship has something to teach us. We’re guessing you’ve learned things worth sharing with others. And you’ve probably heard some pretty harrowing stories, too.

This post aims to show you the variety of relationship types and the richness of the kind we want for you, whatever your orientation or gender identity. You deserve it, too: a relationship built on mutual respect and unconditional love.