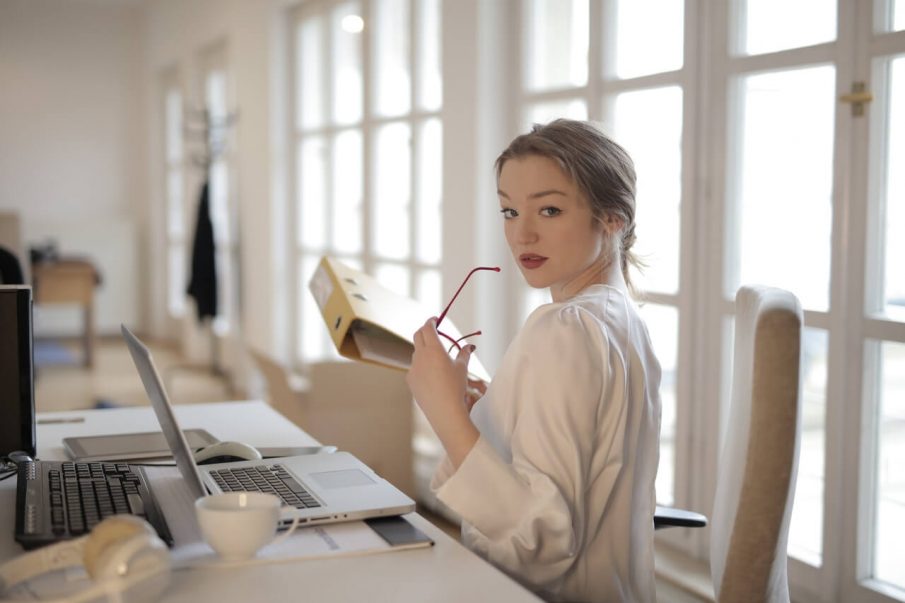 You’re picking up some clear hints that a married female coworker is interested in more than a professional relationship.

Or are you just imagining it?

After all, some people are friendlier than others.

Maybe she sees you as a real friend at work, so naturally she shows you more attention than she does to others.

You have a connection of sorts. You’re just not sure what she expects.

And you don’t want to give her the wrong idea.

So, what are the signs a married woman is attracted to you?

What's In This Article?
[show]

How to Know if a Married Woman Likes You More Than a Friend: 11 Obvious Signs

Since it’s so often the case that the married woman is someone you work with, it’s not a stretch to call these signs a married female coworker likes you.

Only if you’re aware of them can you take steps to handle the situation appropriately.

1. She always finds a reason to be near you.

It’s one thing if she enjoys your company. You might just be someone she feels comfortable around and whose ideas she wants to hear more of.

Or maybe she has a problem and she thinks you could help her with it. Maybe you’re one of the few people she trusts, and her awkward behavior around you is just that.

It’s another thing if she’s always hanging close by and finding reasons to be where you are as often as possible.

If she can’t seem to let you pass without making some attempt to get your attention or without making an excuse to keep you around, consider that a red flag.

2. She acts jealous when you socialize with other women.

If the sight of you with another woman is enough to get her away from her desk and back to your side, eager to hear whatever you’re saying, you’re allowed to be concerned.

If she acts in a hostile or passive-aggressive manner toward other women she sees around you (particularly the ones acting friendly), that’s another warning sign.

When she interrupts a conversation you’re having with a woman and says things to change your view of the “other woman,” take it as clear evidence that she’s begun to see you as someone she wants all to herself.

3. She wants to know all about your life and family.

She’s asking you questions about your family, how you spent your weekend, what relationships you value most, etc. She wants to know everything about you.

On the flip-side, she doesn’t share much about her own family, especially her husband.

Or she might drop a few hints that her marriage isn’t what she hoped it would be or that her husband is a different person at home (and not different in a good way).

There are two goals here:

4. She favors you over other coworkers or male associates.

It makes you uncomfortable at times, because if you can see it, other coworkers probably can, too. Her favor puts you in an awkward position.

You don’t want to be considered her pet, but neither do you entirely dislike her marked preference.

I mean, who can blame her?

5. She looks for reasons to initiate touch.

When she gets all touchy-feely, there’ s more than one way to interpret that:

But if you’re the only one she’s touching or if she’s initiating touch every time you’re around, she’s showing a clear interest in more physical contact.

If she then realizes how she might have looked and steers clear of you out of embarrassment, it’s probably not about you. Take a deep breath and move on.

But if she seeks you out and tries to follow-up on that look to cement the impression that she’s into you, the seductive overtures probably won’t stop there.

Keep an eye out for flirty smiles, lingering looks, and weird “Oh, dear, how clumsy of me” behavior. If she’s being this obvious in her pursuit, it’s time for a plan.

7. She can turn any conversation into a flirtation.

No matter what you’re talking about, she’ll find a way to work in a flirty question or an off-color joke.

She’ll take advantage of any chance to get you alone, maybe by saying things no one else wants to hear or maybe by directly asking you for a private chat.

Once you’re alone (or as alone as you can get in your workplace), she ramps up the flirtation, clearly hoping you’ll reciprocate.

And depending on your professional relationship with her, taking an obvious step back could have repercussions.

But taking a step closer to her definitely will.

13 Indisputable Signs Of Attraction You Must Know

8. She texts you at odd (or inappropriate) hours.

What is it with this woman? She texts you like she’s your bestie at odd hours of the day, even on weekends. And you don’t know how to tell her to stop without offending her.

She seems to think you two have something so special it’s worth interrupting your family time and possibly even getting the attention of your wife or girlfriend (if you have one).

She doesn’t seem bothered by the possibility that her texts might put you in the hot seat.

If she’s trying to inject herself into every part of your life, via text message (or other intrusive methods), you have a right to be concerned.

9. She seems nervous when you’re around.

But if she acts nervous around you because she’s afraid of putting you off or losing your interest, she’ll show that in other ways, too.

For example, nervous as she gets, she’ll still find ways to spend more time around you. And you’ll see other evidence of her interest.

Look for other signs on this list, though, before you decide her nervousness equals attraction — or that attraction means she’s in pursuit.

It’s one thing if she’s paying attention when you’re talking and maintaining eye contact — which is something most of us are told is the polite thing to do.

It’s another if she can’t stop herself from watching you, stealing glances when you’re near, and burning a hole in your back when it’s turned. You can feel her eyes on you, and you’re not sure how to send the message that it makes you uncomfortable.

If she can’t keep her eyes from following you whenever you’re in sight, that’s another sign she’s interested. And much depends on how you handle that.

This is a clear “I like you, and I want to spend more time with you alone” red flag. Unless you two are on a secret project together and have to discuss the details privately, there’s no reason she should be asking you to meet her someplace alone.

It’s a clear sign she’s interested in having you to herself, which is a problem if she’s married.

And as well as you two might get along together, it’s best to gently decline the offer. You can even express your eagerness to get back home to your wife/girlfriend/family.

What Do I Do If a Married Woman Likes Me?

If you’re seeing many of the signs described above, you may be wondering one of two things:

Starting with question number one, yes, there are plenty of good reasons why you should not get involved with a married woman, even if the attraction is mutual.

First, you have no idea what her husband might do if he finds out (and he will).

Second, you don’t know whether she’s cheated before or exactly what’s driving her willingness to step out of her marriage.

These situations can be weird, messy, and complicated.

Third, extramarital affairs don’t end well. And they do end.

Fourth, you could both lose your jobs, because your behavior reflects poorly on your employer, who will eventually find out.

Even if you don’t lose your jobs, the messy situation you’ve both created will have an effect on workplace morale, as well as your ability to focus on your work.

Fifth, if there are children involved, your affair will cause them pain and suffering.

So, what should you do?

Be kind, but keep your distance. Be aware that she’s likely to misinterpret even the slightest show of friendliness. She’s in a vulnerable state, and the best thing to do is to avoid her as much as possible.

If she recognizes how she’s coming across and is appalled or embarrassed by it, chances are, she’ll back off.

Are you seeing the signs a married woman likes you more than a friend?

Now that you’re aware of the signs a married woman likes you more than a friend, which ones have you seen lately? Which are most obvious?

If the married woman in question keeps upping her flirtation game, taking a step back and politely excusing yourself may be enough to send the message that you’re not interested in pursuing a relationship.

She might take offense. But the more you gently and professionally send the message that you’re there to work (not flirt), the more likely she’ll get that message and back off.

The cost of encouraging her is too high.