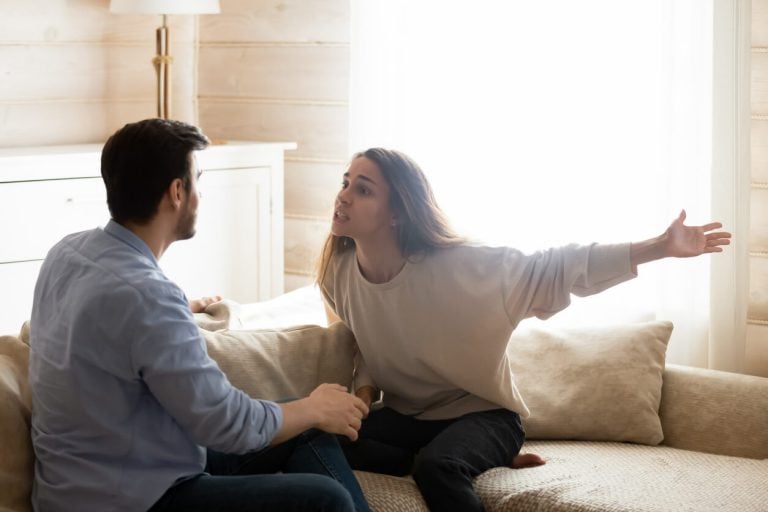 Is reconciliation after an affair possible?

Ultimately, it depends on the couple and their situation.

How long have you been married?

Was your spouse in their right mind at the time of the incident?

Is infidelity a recurring issue in your relationship?

If, after answering those questions, you choose to stay together, navigating the marriage reconciliation process must be done with great care.

What Should You Not Do After Infidelity?

After a cheating incident, don’t make a rash decision — especially if you’re married, have kids, or shared assets! Even if you once agreed that cheating was a deal-breaker, slow your roll.

People make mistakes — big and small. Your partner may be exceptionally and genuinely remorseful.

In the aftermath of infidelity, also consider the following:

You’ve decided to give the relationship another shot. Now what?

Couples take different tacks, but there are ten (plus) common mistakes to avoid after infidelity — and we threw in a bonus one for good luck.

1. Don’t Ask Too Many Questions

Do you really need to know where the affair occurred or the quality of the sex? Questions of this nature do not need to be discussed. It’s just a form of torture, and there’s no satisfactory answer anyway.

The bottom line is that your partner cheated. Yes, you should probably uncover a few broad-stroke issues — which we’ll get to below — but you don’t need a play-by-play. It doesn’t serve your mental health.

Asking too many questions is a problem — so is asking too few. It’s essential to know how long the affair has been going on. The answer to that question will inform the best path to reconciliation — if there is one.

Determining your partner’s feelings for the other party is also a must. Are they in love, or was it really just a one-night stand that happened in a drunken stupor?

“Before you embark on a journey of revenge, dig two graves,” said Confucius. In other words: seeking revenge can blow up and harm you in the end.

Infidelity-related revenge can be messy to the point of danger because emotions are piqued, and people can easily slip into psychotic breaks, resulting in catastrophic outcomes.

Instead, follow the other famous quote about payback: living well is the best revenge.

Don’t let your partner force you into a timeline. Sure, if it’s been over three years and attempts at reconciliation keep failing, it may be time to pack up the relationship. Otherwise, getting over betrayal takes time. You cannot be expected to snap out of it in a matter of days.

Extreme paranoia often rears its head in the aftermath of infidelity. Understandably, the cheated person becomes obsessed with their partner’s whereabouts and contacts. But while it’s to be expected, it’s not healthy in any way, shape, or form. Obsessing increases stress, which has physical consequences.

This one is common sense: don’t involve young kids.

They don’t need to know the intimate details of your marriage. It’s simply not appropriate — especially if they’re young. Sure, if your kids are in their 20s or older, and you need to explain some familial tensions or decisions, then have at it.

But even then, think long and hard about including them in your bedroom matters. No rule says you must share everything with everyone — not even your offspring.

Yes, your partner stuck a proverbial dagger in your back — and it hurts tremendously. And yes, you have every right to shout and scream upon learning of the news. But once the initial shock and trauma pass, refrain from doling out emotional attacks. All that does is reopen wounds and keep the infidelity alive.

Plus, emotional attacks are catastrophic on our mental health. While you may have a burning desire to torment your spouse for stepping out, remember that their state of mind can affect your sanity, too!

Reconciling a marriage after a bout of infidelity is no easy task — and professional, outside help is almost always needed. Couples counselors know how to put your Humpty Dumpty marriage back together again. Moreover, therapy provides a safe space for communication where everyone can express their emotions in a controlled environment.

Counseling, however, can be expensive. Many people — even middle-class folks — cannot afford it, which is why there are public psychological services. You may be surprised at the number of lower-cost therapy options available. Online counseling is also becoming popular and can cost a lot less.

Jane from accounting may be a good lunch partner and fellow “Love Is Blind” enthusiast. But Jane from accounting doesn’t need to know that your spouse cheated. Neither does your least-annoying neighbor with whom you spend the most time at the community summer barbecue.

However, It’s always acceptable to confide in your hairdresser or manicurist. That’s just the way of the world.

But seriously, smearing your spouse around town will only make things worse — which, again, could boomerang back and clobber your mental health.

10. Keep It Off Social Media

For the love of Saint Betty White, do not put your business in the social media streets! It’s a colossal mistake. For starters, although it may feel fantastic in the heat of the moment to blast your cheating spouse publically, it could ruin your chances of ever reconciling.

Moreover, it could negatively impact your spouse’s employment opportunities. Think about that logically: whether you stay together or get a divorce, they need to earn a living to contribute to household costs or alimony payments.

BONUS: No Matter What, Under No Circumstances Should You Contact the Other Party

It’s tempting to blame the other person and absolve your spouse of sin. And sometimes, you may want to track them down and tell them what’s what.

But practically and emotionally speaking, it’s never the right call — unless the other party is someone you both know, like a friend or family member.

Even in that case, though, split the blame evenly.

The bottom line is that no good will come out of tracking down your partner’s paramour. Let it be.

11 Ways To Forgive Yourself for Cheating

How Do You Reconcile a Marriage After Infidelity?

It’s possible to reconcile a marriage after infidelity. It’ll take time and work, but millions of couples have done it, and you can, too, with the right approach and attitude.

When working through the redemption and reunification process, consider doing the following:

Does Infidelity Pain Ever Go Away?

It’s been said that time heals all wounds — and that’s true for many people, but not all. Whether the pain will ever go away depends on the person and situation.

However, studies suggest it takes the average individual between 18 months and two years to heal the pain caused by a cheating partner.

Falling out of love after infidelity is also a possibility. And if that describes you, it’s OK to walk away. But if you plan to stay, setting boundaries while working through the issue is necessary. Not setting any could hamstring the process.

But what should they be?

Infidelity doesn’t necessarily spell the end of a relationship. Marriage reconciliation is possible — it happens all the time. You just don’t hear about it because people would understandably rather show off their latest vacation pics than talk about their marital discord.

So don’t despair. There is a way through. It won’t be an easy haul, but there very well could be a light at the end of the tunnel. Good luck.