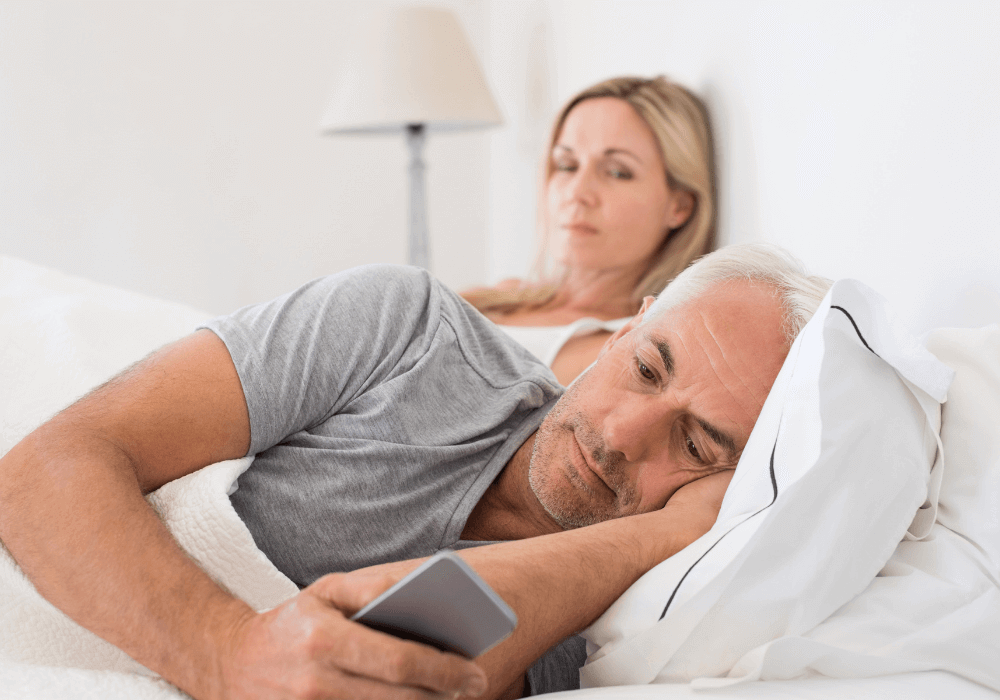 When a married man falls in love with another woman, he discovers just how complicated life and relationships can be.

And he’s likely to fight it.

The consequences of infidelity are far-reaching and, ultimately, painful for everyone involved.

That said, even when there’s a battle going on to hide them, the signs a married man is in love with you are more evident than he might think.

But how easy is it for a man who’s committed himself to his wife to fall for someone else?

Can A Married Man be in Love with Another Woman?

It turns out, it’s not as difficult as one would hope, nor is the tendency exclusive to men.

Married women are just as likely to fall for someone else, given the right circumstances.

How does it happen, though? What can lead a married man to fall in love with another?

13 Signs of a Married Man in Love with Another Woman

Look for the following signs a married man is in love with you when you spend time together.

The more signs you see, the more likely it is he’s formed a connection he’d like to explore, given the chance.

He might also show signs he’s fighting his attraction, so watch out for mixed signals.

His face lights up when he sees you.

You see the delight in his face when he sees you, and it either warms you to the core or stimulates a fight-or-flight response.

Maybe he sees the same positive reaction in your face when your eyes meet. Or maybe he just convinces himself it’s there.

Either way, you get the impression he’s been waiting for you to show up.

He finds reasons to be where you are.

If reasons don’t present themselves, he’ll make his own, just to get more time with you. And he shows a marked preference for your company or assistance over others’.

You have mixed feelings, because you know he’s married. But it seems innocent enough. Then he starts finding reasons to touch you — your shoulder, your arm, your back.

Or maybe he invents an excuse to meet you for coffee or lunch.

He’s at his most animated and attentive with you.

You’re not the only one who’s noticed he perks right up when you walk into the room.

When you’re talking about something (anything, really), he’s riveted by every word that comes out of your mouth. It’s awkward (and, you can’t help noticing, adorable).

If you don’t feel the same, you might respond by finding an excuse to leave, at the risk of seeing the sudden and unmistakable disappointment in his face.

He pays you unexpected compliments.

The random, thoughtful compliments are nice to hear, at least at first.

If he overdoes it, and you don’t know how to respond, you might feel that it’s time to excuse yourself and put some space between you.

On the other hand, if your current partner isn’t lavishing you with compliments, and this guy knows just the kinds you want to hear, you might just linger a while.

He shows a surprising amount of interest in your love life for a guy who’s not your partner, dad, brother, or therapist.

He offers himself as a confidante for any “love issues” you might have because then he can show you how understanding and empathetic he can be.

He’ll risk overstepping with questions to know you and your love life better than most because he wants to be there for you if things get messy (fingers crossed).

He either speaks frankly of his married life or avoids any mention of it.

He’ll either try to send the message that his marriage isn’t all he’d like it to be (maybe because he and his wife don’t have much in common — not as much as he has with you), or he’ll avoid the subject altogether.

He doesn’t want you to see him as a married guy (i.e., “off-limits”), so he might prefer to act as if he’s free to be as friendly with you as he’d like to be.

He’s quick to point out what you have in common.

Anytime he sees similarities between you — especially those that strike him as further proof of your compatibility — he’s likely to point them out.

If he’s fighting his attraction, you might see a hint of a smile when such a similarity is pointed out by someone else, even if he abruptly changes the subject.

Overall, you get the strong impression those similarities matter to him.

He’s quick to come to your aid or offer his help.

He also loves it when you ask him for help — with anything. It’s almost as if he sees helping you as his primary mission in life.

Maybe he sees himself as your mentor or advisor, and he feels compelled to help you in any way he can.

At some point, though, he comes to your aid because he wants to be the first one to show up for you. And it becomes more obvious that his attachment is not platonic.

His body language toward you is open and receptive.

It’s not just your imagination. His body language toward you shows openness and an obvious preference.

When you’re seated together, he’ll turn his body toward you (and away from others) to show you his full attention.

You’ve seen the opposite. And you know (and feel) what it means.

He’s always willing to make time for you.

He always has room in his life for you, whatever you need.

If he can’t drop what he’s doing and run to your side, he’ll get there as soon as he’s able. He’ll even sacrifice other commitments to help you with something or respond to a summons from you.

If he’s not interested in fighting the attraction, chances are he’ll prioritize being there for you over being there for his wife. And that’s likely where it’ll get complicated.

He tries to keep in touch with you on a regular basis.

He makes an effort to check up on you and keep tabs on how you’re doing and whether you need or want anything (at all).

He likes to be in the loop at all times with anything to do with you. If you’re hurting or if anything goes wrong, he wants to be there for you.

So, even if you don’t see each other every week, he’ll make sure you don’t become strangers. And he’ll find a million reasons and ways to keep in touch.

He values your opinions and seeks them out.

He’s not only open to hearing your opinions, he asks for them. He wants to know more about you and what you think — about everything.

He wants to be on the same page with you, and he wants you to see that your thoughts matter to him.

Obviously, this will stand out more if being open to others’ opinions is new for him.

He’s on his best behavior when you’re around. He’s the first to offer you a seat, to ask if you’d like some refreshment, and to engage you in conversation — or, at least, he strives to be.

If he has competition in this arena, he may seem noticeably perturbed by them.

Clearly, he’s hoping to impress you and to stand out as the kind of guy you can trust to treat you with respect and thoughtfulness.

What Makes a Man Leave His Wife for Another Woman?

It’s hard to talk about the possible reasons why a married man might leave his wife for someone else, but it’s still important for everyone involved to know why.

Here’s a sampling of the most common reasons:

Time will tell whether this new connection will fare better than the first. Dating a married man is different from dating a man who’s free to pursue a relationship with you.

When a married man tells you he loves you, the obstacles to your relationship don’t magically disappear. If anything, they become more noticeable.

Is a married man in love with you?

Now that you’ve looked through the signs a married man is in love with you, what will you do this week if he levels up his attention? And just how messy can this get?

What if he has kids? What if his wife is your BFF? What if you’re in love with him, too? No matter how strong your connection, affairs with married people rarely end well.

Your best bet? Enlist the help of someone whose counsel you trust. And give each other the space you both need to consider the whole picture.