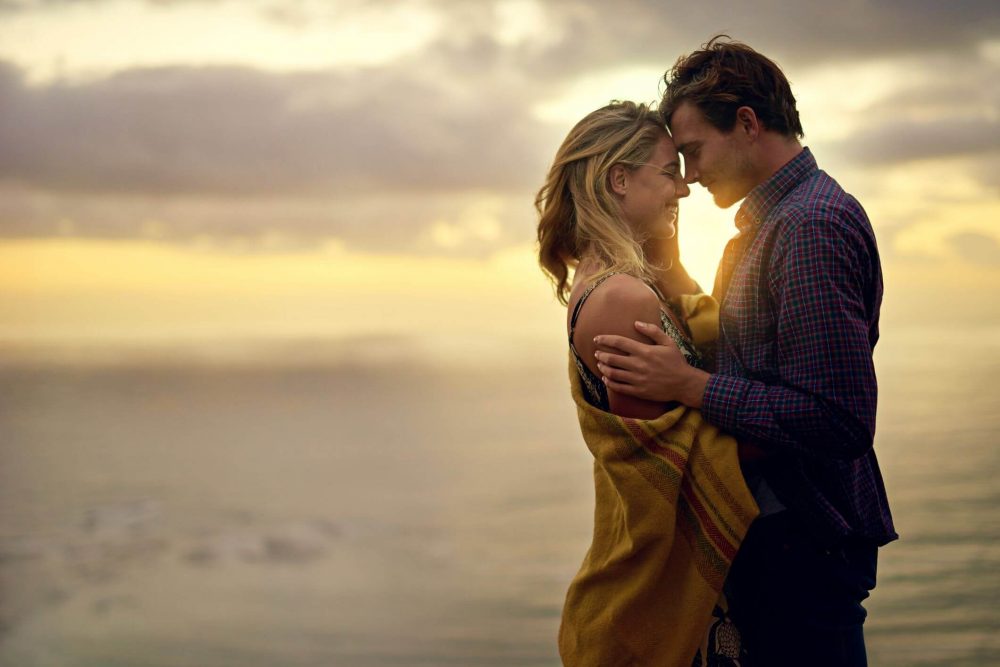 You think about him all the time.

Still, you’re asking yourself, “Do I really love him, or am I just lonely?” What are the signs you love him and are in love with him?

Put aside for the moment whether he feels the same.

This post is about helping you get clear on what you want — and whether that involves him.

So, how do you know one way or the other?

Whether you’ve been head over heels in love before or not, there are telltale signs that show up in your behavior and your thoughts, as you’ll see in the main list further down.

But what might you feel if you’re in love with this guy?

From those feelings come a variety of observable signs. Read on to see what they are.

31 Undeniable Signs You’re in Love with Him

If you’re still wondering, “Do I love my boyfriend?” look for the following signs. Keep track of the ones that stand out for you.

Love is such a compelling force that you won’t be wondering for long. But the signs below can confirm what you already know in your heart of hearts.

You look into your own future, and you see him in it because you want him there.

A future without him looks empty by comparison, even if there’s plenty to like about it. You value your alone time. But outside of that, he’s the one you see yourself with most often.

2. You talk about the future together.

You talk together about the future and throw out comments like, “Where should we go next year?” or “Where do you see us living five years from now?” And, as far as you can tell, neither of you feels the impulse to run away.

3. Everything (and I mean everything) reminds you of him.

It doesn’t take much, really. You catch a glimpse of a travel mug, and you think of his.

Or you see a stray comb and remember his adorable scruffy hair look. It’s distracting, but you’re fine with it.

4. You’re always talking about him.

Your friends can vouch for this. It doesn’t take much to get you talking about this guy. He’s on your mind all the time, and you love talking about him and about your favorite moments together (the ones you can talk about).

When you’re together, everything you do is worth doing, whether you’re sitting in the same room reading your own books, having dinner together, or riding a roller coaster in the middle of the week.

6. You’re up for anything as long as you get to spend time with him.

You each have your own ideas for what to do together, and you love that he values your ideas as much as you value his. And when he suggests something that wouldn’t occur to you, if he’s game (and the activity doesn’t involve doing harm), you’re all in.

7. You lose track of time when you’re with him.

You enjoy being around him so much that you often lose track of time. If it weren’t for scheduled reminders on your phone, you’d probably forget other important plans and commitments.

8. You feel safe with him no matter what you’re doing.

Whatever you’re doing together, you feel safe with him. You respect his judgment, and you trust him to care about your safety and well-being. You feel treasured and protected.

9. You want to know everything about him.

You’re endlessly curious about him — his past, his present, and what his goals are for the future. You like to hear about what he’s up to and what he’s learning. Nothing about him is boring to you.

10. You notice things he likes.

Wherever you go and whatever you’re doing, you notice things he likes. And the better you know him, the more you see things concerning what he likes and dislikes.

11. You re-read his text messages.

When you can’t be where he is, sometimes you’ll re-read the text messages he’s sent, just to remember how you felt when you first read them. It’s not the same as being where he is, but it makes it a little easier to be apart.

12. You scroll through his photos when he’s not there.

You do this, especially when you can’t mentally recall his face. That smile of his lights you up inside.

You study every line and curve of his face, his hair, and everything you can see. And you use those images as a story prompt for your imagination.

13. You check him out on social media.

If he’s on social media, you’re his #1 fan (without being creepy about it), sharing some of his posts and engaging with your favorites. You have shared interests, so it’s not hard to start a conversation you’re both into.

14. He’s the first person you want to share things with.

15. You feel comfortable talking to him about anything.

No topic is off-limits with him. You love hearing his perspective on things, and you trust him to be a good listener, too. You trust he won’t hijack the conversation and make it about himself or about a thousand tangents that come to his mind.

16. You feel more energetic when he’s around.

Whether it’s his sense of humor (which cracks you up) or the energy he brings with him, you feel more alive and energetic when he’s around than when he’s gone.

Am I In Love? 31 Undeniable Signs You Are

17. You love all of him — including his quirks.

It’s not a matter of settling; you wouldn’t change him.

And you wouldn’t trade him for anyone else, however many times he slips up. And you trust him to be both honest with you and wholeheartedly accepting when you slip, too.

18. You’re finding it hard to concentrate (on anything but him).

Thoughts of him are never far away, and you find it impossible to get through the day without your thoughts turning to him. He’s your favorite “happy place.”

19. You keep replaying your best moments with him.

Whatever happened in those moments, you daydream to re-live them over and over again. It’s like watching the highlights of your favorite movie repeatedly — only this one is real and, hopefully, is just the beginning.

You fantasize about your physical intimacy, and he’s always the only co-star. Because he’s the only one you think of in that way. If you’re not intimate yet, you keep those stories to yourself.

But if they’re not your main focus, they’re often playing in the background.

21. You’re thinking of introducing him to your family.

You don’t introduce just anyone to your family, but he’s someone you can’t wait for them to meet. And you really want them to get along because you see him as someone who belongs in your life for the long-term, even if marriage isn’t part of the picture.

As long as you’re both willing to make little sacrifices to meet each other halfway, this isn’t a red flag situation. You’ll sometimes give up something you want for him, and he’ll do the same for you.

The give-and-take feels natural and loving — never forced or one-sided.

You feel comfortable sharing your true self with him, so you let him into your world — or you’re feeling a strong desire to let him in. If you’ve gotten used to keeping your private world private, this is a big step.

24. He’s your favorite person to spend time with.

Sure, you also enjoy the company of close family members and other friends. But you have to admit you crave his company more than anyone else’s. You feel most at ease and most alive when you’re with him.

25. You see things in him you never knew you wanted.

You’ve noticed things about him that answer a deep longing you hadn’t realized was there.

The more you know him, the stronger that yearning feels. He’s awakened something in you that’s been dormant for too long.

26. You show him more of your true self than anyone else gets to see.

Because you feel accepted by him, you let him see more of you than you show to most people (including family). You trust him not to back away in horror or to say anything in the neighborhood of “I love you anyway.”

27. You can’t stand being fake with him or holding back.

With him, you don’t have to pretend to be someone you’re not. You’re both past the point of putting on a show to impress the other.

And when something needs to be said, you don’t hold back. You’re your authentic self with him, and you love it.

28. You feel any friction between you more deeply.

When you two are at odds, it hurts more than when you’re at odds with anyone else.

And it becomes your top priority to get back to a good place with him because everything’s better when you’re both in sync with each other. And nothing’s right when you’re not.

29. You don’t worry about scaring him off.

You no longer worry that he’ll learn something about you and decide you’re just not worth it to him. You know, on a gut level, that you’re both worth it to each other. Nothing about you could scare him off. And it works both ways.

30. You can’t imagine being without him.

The thought of never having a chance to be with him (not just once but as a couple) makes you ache. No one else could possibly take his place. And you don’t want to imagine a life where you don’t end up together, whatever the obstacles.

Despite everything that might stand between you two, he’s the one you think of in your quiet moments and at every critical moment in your life.

He’s the one you’d go to the ends of the earth for. Because only with him do you finally feel at home.

Do these signs point to love?

After reviewing the signs, if the words “I think I love him” reverberate in your mind, we hope it leads to something beautiful for you both.

And if your next question is, “Why do I love him?” ask yourself what he brings to your life that you don’t want to give up. And what do you bring (or want to bring) to his?

You know your situation better than we do. So, what comes next?

And what will you do differently today?