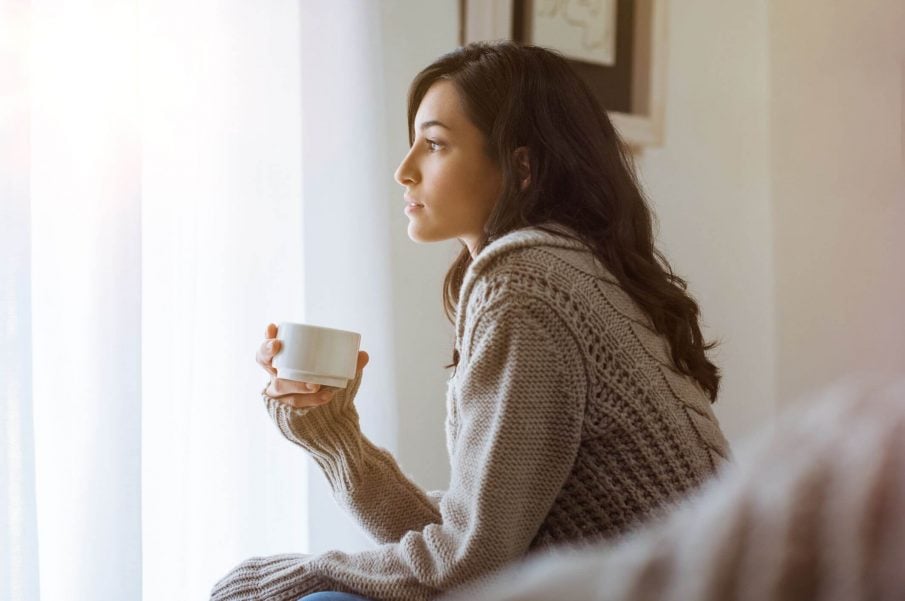 You’ve spent more time than you’d like to admit fantasizing about someone you can’t have.

Your whole sense of self is tied to the idea that you two should be together.

By chasing that carrot, you’re getting further away from the gold. You’re leaving yourself behind.

But if you know the reasons why you can’t stop thinking about him, it’s easier to see how your life could improve if you let him go.

The more clearly you can see the path you’re on, the sooner you can get back to becoming the person you want to be.

What Does It Mean When You Can’t Stop Thinking About Someone?

There’s a good reason you’re sitting there, head in hands, thinking,” Why can’t I stop thinking about him after our break-up?” or “Why can’t I let go of this guy and move on?” You’ve lost something that mattered to you.

It’s hard to let go of what you had or thought you had — or what you wanted to have with him. You need to accept the loss and give yourself time and permission to grieve.

Is It Normal to Think About Him All The Time?

Yes, it is normal. After all, this is someone you care about and want in your life. The longing you feel is visceral, and even when your mind is on something else, your body holds the pain.

Although understandably, you think about him a lot, it can impact your productivity at the least. At worst, your thoughts can become obsessive and interfere with your day-to-day ability to function.

Why Can’t I Stop Thinking About Him? 15 Top Reasons

You’ve admitted to yourself, “I think about him all the time.” Now, you need to tell yourself you have a right to look at the deep-down reasons for that. Only when you know what’s going on beneath the surface can you do what you need to do to heal and move forward.

If you’ve fallen hard for him, there’s no reason to expect those feelings to disappear just because he did. And if he’s still around, of course, you’re gonna think about him.

But if you know you can’t have him, no one can blame you for wanting to get him out of your head.

Those steamy fantasies are only making it harder to focus on other areas of your life.

If a romantic relationship with him isn’t an option, give yourself permission to want more for yourself than disappointed hopes.

Maybe you’re stuck thinking he has everything you want in a man. So, you keep thinking of him as a way to keep at least part of him in your life.

For a while, it feels so good to fantasize about being with him. But eventually, you realize, it’s not enough. And it never will be.

Because he’s not the complete package. He’s missing one very important requirement: he’s not inclined (or able) to reciprocate your love.

You deserve to fantasize about someone who is.

3. Being around him makes you feel more like the person you want to be.

In your mind, he makes you a better person. You like yourself better when he’s around.

But if he doesn’t want to be with you, he doesn’t deserve prime real estate in your mind. You have just as much right as anyone else to want a relationship where you’re both crazy about each other.

His having a good influence on you doesn’t mean he’s the one.

Meanwhile, you don’t need him to become the person you want to be. Fixating on him is only holding you back.

4. Just thinking about him gives you an emotional high.

Just thinking about him gives you a shot of happy brain chemicals, giving you a temporary high. You feel even better when he’s smiling at you.

Oh, but when one of those “reality check” moments come, you feel like a fool. It’s as if everyone but you has known all along he’s not into you. It just took you longer to see it.

Yet every time you see him or imagine being with him, you feel that same high.

He’s a drug to you. And maybe you’re beginning to realize the cost of feeding that addiction.

5. Thoughts of him distract you from difficult things going on in your life.

Thinking about him is all-consuming. It crowds out everything in your life that has nothing to do with him. That includes the things you’d rather avoid: unwanted responsibilities, personal struggles, looming deadlines, etc.

Fantasizing about this guy is how you’re escaping the difficult things going on in your life.

If you flip the switch by facing a challenge, you may find you think of this guy less often, because you don’t need to retreat to the “happy place” he’s occupied in your mind.

6. You keep dwelling on hypotheticals.

You keep thinking about what might have been or how things could have gone differently.

Maybe you blame yourself for the way things went. But he’s responsible for the choices he made. And if he had the chance to move forward with you and declined it, that’s on him.

Stop torturing yourself with the idea that if you’d only done something differently, he’d be there with you. Forgive yourself for mistakes you might have made. We all make them.

All you need to deal with is the present.

How better to escape the pain of loneliness than to let your imagination take over, inventing a world in which you and this man make each other happy. You spend a lot of time there, and it eases the pain — at least for a bit.

Eventually, though, you have to admit none of it is real. And you want something real.

Signs Of A Good and Healthy Relationship

You love a mystery, and that’s what he is to you. You haven’t been able to pin him down (mentally or otherwise).

You get full-on butterflies whenever you see him, and you want to know him better. But you also want to always feel this way around him.

You enjoy the fantasies where he draws you into his confidence and you end up sharing more than secrets. But at some point, the excitement fades,

And unless there’s a lot more to him than mystery, there’s nothing to hold onto.

It’s possible you’re struggling to forgive him for something related to the break-up. After all, it’s not easy to move on when you feel the need for closure. And if there’s no way to get that closure, you may feel trapped in a web of resentment and regret.

Forgiveness, though, is a gift you give yourself — not to the one who hurt you. And hard as it is to forgive someone who left you feeling lost and broken, you need this.

Don’t let your ability to heal and move forward depend on someone else.

You’re beating yourself up for not doing enough to keep him around. Maybe you think if you’d only spoken his love language more often, he’d have stayed.

Or maybe he made you feel like you could never do enough for him (or be enough).

Whatever led to the break-up, you can’t move on until you forgive yourself for not being everything he wanted, love yourself as you are, and let go of him.

If he made you feel like the break-up was all your fault, he’s not worth the pining.

11. He’s opened your eyes to new ideas and experiences.

Whatever new interests and experiences are now part of your life because of him, your brain connects him with exhilaration and excitement.

It’s natural to feel attached to someone who brings more color to your life.

But now you know the interest isn’t mutual. Or you know you two just don’t work. So, it really doesn’t matter if he’s the one you got you hooked on Doctor Who.

You’ll always have that, but you know it’s not enough. Free yourself up for new experiences with someone else.

12. You two have great chemistry.

You had something special with this guy — something you didn’t have with so many others. Naturally, you’ll be thinking about him more. After all, he might one day see what you see.

But if there was never more than chemistry between you, you’re better off letting go of him and getting better acquainted with yourself.

And if your mind is focused on him, you won’t be able to see anyone else.

You deserve a loving relationship with more than chemistry. Prepare yourself to recognize it when it comes.

Anyone who cares enough to make you look harder at something and challenge your own beliefs is likely to capture your imagination, especially if you’re also attracted to them.

It works the same as when you feel that the guy you like makes you a better person. Except, in this case, he probably made you angry first.

Eventually, though, you realized you had more respect for him than for the guys who didn’t challenge you. And now, you’re feeling stuck, because this extraordinary guy is gone — or involved with someone else.

14. Everything reminds you of him.

Everywhere you look, you see things and people who remind you of him. It’s not fair. You can’t have him, but you can’t not be reminded of how you feel about him.

Part of you wants to feel the sweet torture of suddenly seeing his face in your mind, clear as if he were right in front of you.

It helps to accept that you’ll be reminded of him. Little things will trigger memories associated with him, and that’s okay. Allow yourself to feel it.

Then redirect your attention to something in the present.

You’ve done everything you can to push him out of your head. The problem? The harder you work to forget him, the more you make him a fixture in your mind.

It’s like trying not to picture a pink elephant. Suddenly, that’s all you want to think about.

Same goes for your ex (or the guy who got away). Try really hard not to think about him, and that’s all you want to think about. Talk about counter-productive.

Now, it’s time to learn some useful tips for getting that guy out of your head.

How to Stop Thinking About Him

When you can’t stop thinking about him, and you understand why it’s time to take mindful action to replace those thoughts with better ones.

You can manage your intrusive thoughts and stop thinking about him for a time by trying these tactics:

Are You Ready to Stop Thinking About Him?

Now that you’re familiar with the most likely reasons why you can’t stop thinking about him, which ones stood out for you?

And looking at the list of things you can do to get him out of your head, where will you start? What will you do today to free your mind for better things?

Chances are, you’ve tortured yourself for long enough with what-ifs, guilty thoughts, and self-criticism. Enough of that. You’re taking a better step forward today.

Choose yourself, so you can feel free to go after what you really want.