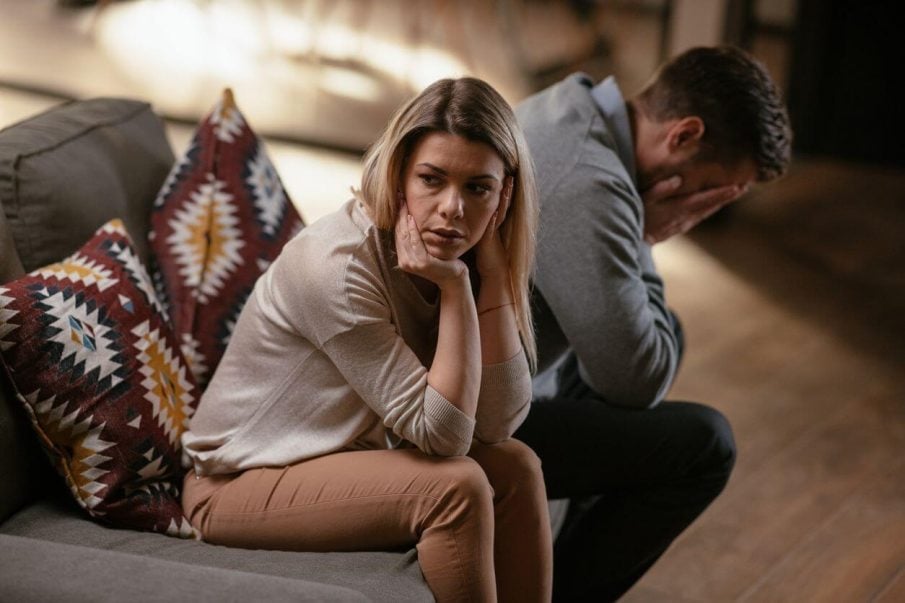 By their very nature, intimate relationships make two people tune into each other.

You get a sense of your emotional states. You notice when the other is happy, sad, angry, or perhaps…guilty.

Signs of guilt in a man can take many shapes.

When a man feels guilty for cheating, he may display behaviors along a broad spectrum from gushing with love to hostility.

Initially, your intuition or gut feelings may have alerted you to something feeling off about him.

Now that you sense a change in him, you can pay closer attention using the analytical side of your mind to see if he is showing any signs of cheater’s guilt.

How Do I Know If My Husband Is Lying About Cheating?

Even when people choose to lie, they feel guilt because they understand that it is wrong. Guilty reactions to cheating accusations can reveal his lies.

The art of detecting lies is not dependent on the subject matter. Whether your husband is lying about cheating or a thief is lying about stealing does not really matter.

Overt and subtle physical cues accompany most lies.

Examples of body language associated with lying are:

Of course, you’ll have to compare these body language warning to signs to what you know to be normal for your husband. Another interesting hint that someone is lying is that they stare at you closely after saying something with a look that says, “Are you believing this?”

Research has also identified many vocal cues that tend to manifest more often when people lie. These are:

Cheating on a wife requires time away from the wife. Changes to your normal routine caused by his increasing absences serve as a red flag of a cheating husband. He may say that he has to stay at work more often or suddenly has many more business trips than usual that are a high priority for him.

When work is not the excuse, then you may notice that he has gradually been planning more social outings with his “friends” than he used to. He may even use the excuse that a friend is going through a tough time and needs social support.

These days, the smartphone is the gateway to almost every aspect of a person’s professional and personal life. Among trusting spouses, phones are typically not sacred objects that cannot be touched by the other.

Even though we all have a degree of possessiveness over our phones, partners sometimes use the other one to check a map or text or look at a picture the other received.

If your husband or boyfriend previously had no issue with you glancing at his phone occasionally but suddenly keeps it out of your sight, then he may be straying.

Common tactics for protecting a phone include:

If he has ceased starting conversations and appears preoccupied, he may be displaying signs he regrets cheating. Being in your presence reminds him of the hurtful betrayal that he committed, and he wants to avoid the contact so that he can push it to the back of his mind.

Moody reactions to what should be mundane questions about day-to-day life hint at his inner turmoil as well. If anything that you do or say elicits a sour or hostile reaction, then something is definitely eating at him.

A decrease in sexual intimacy or the complete cessation of sexual encounters can be a sign of cheating. Although many medical or mental health problems can interrupt a couple’s sex life, cheating also causes this behavior. He may even feel like he would be cheating on his new lover by having sex with you.

On the other hand, cheaters may start to initiate more sex with their partners. This opposite reaction may be an attempt to throw you off the trail. He is trying to mask his infidelity by creating the appearance that he is completely into you.

Signs of cheater’s guilt include lavishing you with praise and kindness. He may be soothing his conscience by doing things to make you happy.

He may take you out to dinner or other places you like more often than he used to. Nice gifts and flowers may become more frequent.

The old “That’s not true; It’s you with the problem” ploy is known as gaslighting. He may derail your attempts to uncover the truth by attacking your perception of everything.

He’ll say that you’re imagining everything. Anything that you say becomes wrong. If you confront him about cheating, he may accuse you of cheating. All of these attacks on your reality are meant to deflect the truth and derail your ability to deal with the situation.

Many things could fall into this category. You’ll have to compare his behavior to what you knew to be normal in the past. It could be suddenly cleaning his car more often or spending more time on a computer or phone.

He may stop doing routine things around the house that he used to do but has now become too busy or tired to care about. You might notice that he has some new items that could have been gifts that he did not tell you about.

Has he recently become more concerned about his appearance? He might get haircuts more often and start exercising more. Is he wearing a new cologne or updating his wardrobe?

In many cases, these can be positive behaviors unrelated to infidelity. But considered alongside other clues, his desire to look better could be to impress a new lover.

Persistent grouchiness or sensitivity to normal inquiries about his day are signs of cheater’s guilt. He wants to avoid talking to you about anything to protect his privacy.

To accomplish this goal, he makes interacting with him so unpleasant for you that you leave him alone.

Coming home and going straight to the shower can be concerning if this is new behavior for him. He may be washing and brushing his teeth to remove the scent of a lover’s perfume.

Humans tend to look at or glance at people who interest them. You may have once been the center of his attention, but now he wants to ignore your presence.

By building walls between you, he shields himself from the full force of his guilt by attempts to shift you into the background of his life.

If you notice that your husband is handing money and expenses differently or is trying to keep you out of financial decisions or prevent you from looking at bank statements, he may have a guilty reason for doing so.

He may have opened a new bank account or credit card in his name only to prevent you from seeing his spending activity. Any mysterious alterations to his money habits could indicate that he is spending money on a new love interest.

Expressions of love are a standard part of relationships. If he used to tell you that he loves you, but now you notice that it’s been a while since you heard it, the reason could be that he’s in love with someone else.

You may also notice other signs of affection have dropped off as well. He may not hug and kiss you as much as he once did or be as romantically playful and touchy.

Clues to infidelity can be left in pockets. The scent of another person could linger on fabric. No longer leaving dirty clothes in the hamper when he was once apt to do this may mean that he’s being careful to avoid leaving evidence for you to find.

If he was doing a big load of laundry once a week but now does multiple small loads every week (or was fine with you doing his laundry but not now), then this shift in behavior can be a warning sign.

15. Picks Fights With You

An increasingly tendency to be argumentative or critical of everything that you say hints that he views every interaction with you as a conflict. Consciously or unconsciously, he may be trying to train you not to talk to him.

Turning everything into a fight also provides an opportunity for him to storm off for hours and not tell you what he is doing.

Can A Marriage Survive Serial Infidelity?

A partner who is a repeat offender is three times as likely to cheat on you compared to someone with no history of infidelity according to a study that looked specifically at serial cheaters.

In general, regardless if cheating occurred once or continually, another study found that 53 percent of couples with a cheating partner were divorced five years after receiving couples therapy.

Although these figures make it clear that restoring a relationship after infidelity will be an uphill battle, some couples manage to succeed. The odds are certainly against them, but they are not totally against them.

Preparing for the Challenge

An infidelity crisis can propel a couple into confronting their problems. Couples therapy can improve communication and help people see the value of their commitment to each other.

To survive cheating and hopefully come out stronger on the other side, you need to be honest about any role you had in making the relationship deteriorate.

Additionally, your partner must accept responsibility for his actions and agree that they were wrong and hurtful.

Healing from infidelity is a prolonged process that requires time and a willingness to forgive. The guidance of a licensed therapist will be crucial to completing this process successfully.