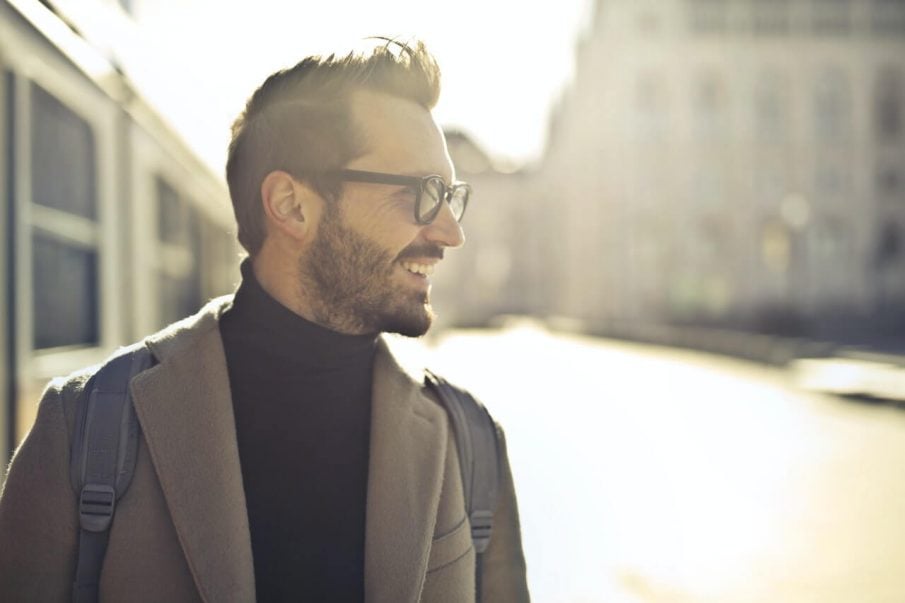 As a man, you may feel unhappy with your options within the male social hierarchy.

Your distaste for the system and sense of otherness may mean that you possess sigma male traits.

They are not below alpha males.

In fact, sigma males can hold an equivalent status to the alpha while enjoying greater freedom and connection with their truest selves.

What Is A Sigma Male?

You may be familiar with the classic male social hierarchy that places alphas on top. Beta males occupy the next step down, followed by delta males, gamma males, and omega males.

The sigma male does not fit in at all.

A sigma man neither leads nor follows. He feels no overwhelming urge to be the boss or to settle for the scraps of status potentially available to followers.

Sigmas may experience a co-equal status to alphas because they also frequently attract sexual partners and generally intrigue people.

If you’re a sigma male, your outsider status is actually a display of power. You value your freedom too much to jockey for position in a hierarchy.

Additionally, the sigma male does not require the validation offered by a hierarchical position. His charisma arises from his willingness to listen to others, lack of emotional neediness, and enticing aura of mystery.

Although sigma males display some distinctly different personality traits than alpha males, they have some things in common.

The sigma male has a high status in the eyes of others. They can command attention in social gatherings, attract sexual partners, and avoid bowing down to authority.

A sigma male may have the inner qualities to pursue an alpha position, but key personality differences motivate the person to take a different path.

You will often hear sigma males referred to as a “lone wolf.” This is partially correct because sigma males thrive on their own. They do not need the constant social reinforcement that defines an alpha male’s existence.

An alpha cannot exist outside of a social context, but the sigma male’s identity remains the same regardless of the presence of people.

He thinks for himself and pursues personal goals instead simply following a herd mentality. Sigma males choose social interactions and relationships from genuine interest instead of the need to cultivate large social circles for the purposes of domination.

Here are some ways that sigma males differ from alpha males:

Any sigma male test that you encounter will attempt to parse from your responses these differences and similarities. A full spectrum of variances occupies the territory between the extremes of fully alpha and fully sigma.

11 Signs of the Sigma Male Personality

Living outside of the social hierarchy greatly limits a sigma male’s desire to follow leaders. Nonconformist is also an appropriate world.

Most people either have an inner desire to dominate and lead or be a follower and comply with authority figures.

As a free thinker uncoupled from the human tendency to find comfort in authority, you have little or no compulsion to accept authority.

A sigma may at times agree with an authority figure, but the decision arises from independent thought that has deemed an authoritative decision strategically valuable.

As a result, sigma males often spend time by themselves. They use social media infrequently and don’t need regular contact with others to feel content.

As a sigma male, you appreciate your inner world and want to engage in activities that are personally fulfilling whether they are oriented to financial gain or acquisition of new relationships.

Sigma males have a chameleon-like nature. Their flexible personalities adjust to different situations. They can interact with multiple social hierarchies without becoming part of them.

Because sigma males are not fixed in a position on the social hierarchy, they risk less when changing their social role.

Although sigma males aren’t ever going to be a team player, they are perfectly capable of functioning within groups when necessary or desired.

If you’re a sigma male, then you get along with people from all levels of the social hierarchy. Unlike someone trying to maintain a hierarchical position, you would rarely have ulterior motives.

The sigma male engages people out of genuine interest or curiosity. This differs greatly from the alpha who wants to dominate or at least extract something of value out of other people.

Sigma men can generally read everyone in a room like an alpha may do, but sigmas won’t feel the overt need to broadcast their brilliance.

Sigma males tend to prioritize thinking before speaking. They like to spend time analyzing everything, including experiences, emotions, and new information.

They take the time to reach their own conclusions instead of accepting conventional interpretations.

Independence is the guiding force of the sigma male. If you are a sigma, you avoid authority. You’ll seek a lifestyle that lets you be the master of your fate.

Although a sigma male is not above seeking help when appropriate, he typically can recognize his own problems and solve them. He knows how to take care of himself and is content to do so.

Sigma males know what they want from life because they have given it plenty of thought and rejected the roles expected of them in a normal hierarchy.

When you’re freed from the pressure of functioning in a hierarchy, your emotions and desires take center stage.

With greater self-awareness comes a greater capacity to manage emotions and recognize when they are serving you or not serving you.

8. Marches to His Own Beat

A sigma man doesn’t need to follow trends or do what’s expected. He marches to his own beat — not to stand out or impress but because that’s who he is.

He knows what he likes and what he wants, and doesn’t need society’s input (or anyone’s for that matter) to define him.

He has an inner compass that guides him, even if he goes against the flow or ruffles some feathers. He’s his own man and completely confident in that.

The Sigma guy doesn’t need to wear his emotions on his sleeve or reveal all aspects of himself to everyone. Others may not be able to read him or know exactly what he’s thinking.

There’s an air of mystery about him that isn’t intentional. He’s not trying to be secretive or perplexing. He just holds back until he’s ready to offer more. This quality can be frustrating for those in a relationship with him, but the right kind of partner will appreciate his strong and silent approach.

Because he is independent and doesn’t always comply with authority, the Sigma man can flirt with dangerous situations. He’s not a trouble-maker or a lawbreaker, but he doesn’t mind stepping close to the line.

He doesn’t do this just to make a point or show off. He has a good reason that fits with his personal worldview.

He may do things that appear reckless and aren’t completely safe (riding motorcycles, swimming with sharks, etc.), but because he’s intelligent, he takes calculated risks that he thinks through carefully.

Either because he doesn’t have time to bother with them or hasn’t honed them, social skills aren’t the Sigma male’s strong suit.

He finds small talk boring and unnecessary and doesn’t see the point in trying to brown-nose the boss or curry favor with decision-makers. Ingratiating himself to others to try to impress goes against his values.

He may be the guy who shows up in jeans to a cocktail party he really doesn’t want to attend. Or he’s the one who doesn’t reply to texts or emails because he doesn’t spend much time looking at his phone or computer.

Some sigma male examples will increase your understanding of the subject. Fictional film characters provide famous examples of intelligent, independent men unconcerned with participation in a hierarchical structures.

Real-life contemporary figures illustrate the qualities of sigma males as well but are harder to identify because sigmas may not seek fame. Some consider Elon Musk a sigma due to his obsession with his ideas and goals.

Because the sigma male orients his life around his authentic self, he avoids shallow romantic relationships. He may indulge in casual dating flings, but he’ll only feel motivated to launch a real relationship with someone sufficiently compelling to him.

His ability to stand out from the crowd aids him in attracting potential partners, which means he does not have to settle for someone not up to his standards.

As with all aspects of the sigma male life, these men think through the details. They take relationships seriously and don’t usually enter into a dating relationship lightly. They will not want to spend time with partners who want to play manipulative games.

Sigma males are good in romantic relationships with women who are:

You may notice how this list reflects many of the same attributes as the sigma male. The sigma male is good with women who are secure with themselves and don’t need continual validation. Neediness essentially turns off sigma males.

Because sigma men need their space, open and honest communication within a relationship about expectations will be helpful. These men gravitate toward nomadic or semi-nomadic lifestyles. They may never want to settle down with a traditional family.

However, true love always remains a possibility, but the partners of a sigma male need to acknowledge that he will live on his own terms. That may include a long-term relationship or it may not.

The clear takeaway for anyone dating a sigma male is that you’ll never change him.

Instead, you should respect his individuality and go from there.

You can mindfully nourish sigma male traits and improve your life satisfaction.

Perhaps you’re unhappy with your position within a male hierarchy. Maybe you even gravitate into the alpha ranks but dislike the demands of that role.

If you’re feeling too much pressure and experiencing too little reward, then adopting the sigma male approach to life could help you connect with the right career or experience greater dating success.

You might already have strong sigma male traits but never fully recognized them. Taking a sigma male test will let you see where your starting point is.

It’s never too late to free yourself from a stifling hierarchy and embrace your authentic nature.