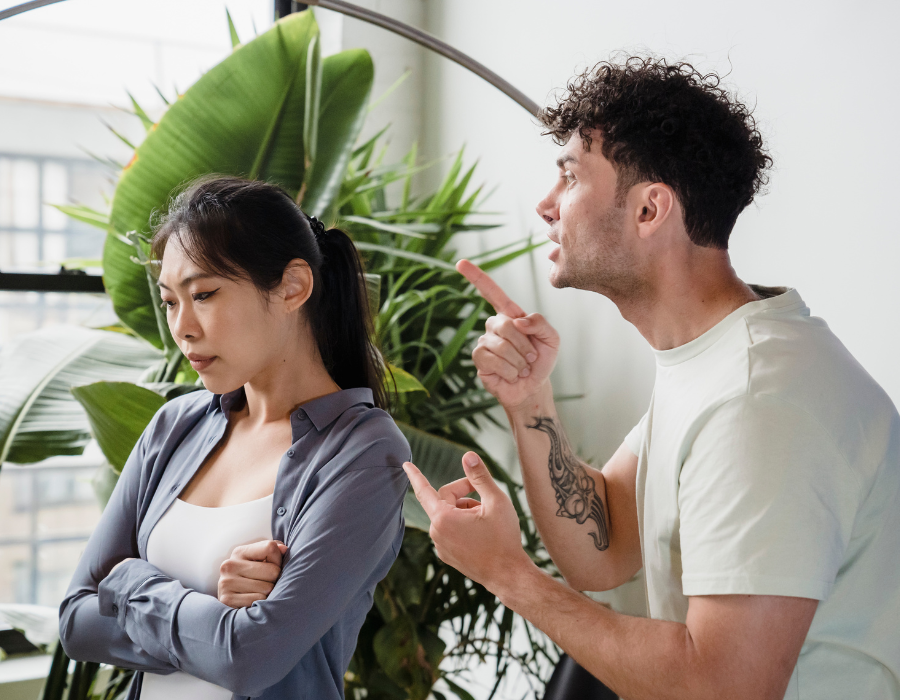 Not all lies involve saying things that aren’t true.

Sometimes you might omit specific details to avoid an unpleasant reaction or to spare someone’s feelings.

And you might have wondered, “Is omitting considered lying?” The short answer is yes.

Granted, it’s hard to tell the whole truth if you know it will change the outcome in a way you probably won’t like.

Lying by omission can be a form of self-preservation.

Unfortunately, even well-intentioned lies of omission can sabotage your relationship.

What Are the 4 Types of Lies?

What is the difference between lying and withholding information? To answer this question, you need to distinguish between the four types of lies:

Denial is when someone refuses to accept or acknowledge a truth. This can be purposeful or habitual, and it often goes with another lie to counter the truth.

Fabrication is when someone purposely fabricates a lie, telling you something objectively untrue.

Exaggeration is when someone exaggerates a truth, making it untrue or misleading.

Omission of truth is when someone leaves out a fact, like a key detail of a situation, or chooses not to correct a misunderstanding that works in their favor.

What is Lying by Omission?

Any lie can damage trust between two people. But lies by omission are sneaky because it’s easy to trick yourself into thinking you’re not actually lying because you’re not saying something out loud that isn’t true.

You might even tell yourself it’s in everyone’s best interests for you to omit certain details — or to choose not to correct a misunderstanding.

But put yourself in the place of the one receiving the lie — or receiving incomplete information. Consider the following lie by omission examples:

Lies by omission can be just as harmful as other kinds, if not more so. It’s more difficult to expose a lie of omission than to disprove a straightforward lie. Meanwhile, the damage remains and can worsen as time passes.

Why Do People Lie by Omission?

The top reasons you might lie by omission have to do with one of the following:

With the first three, your feelings are behind the omission of truth. With the latter, it’s pure, cold pragmatism — no feelings required. The goal is to deceive, and the only one who benefits is you.

The more your relationships matter to you, though, the more you’ll want to know how lies of omission can hurt them.

Innocent as a lie by omission might seem, it’s still a lie, and it can still do damage. In fact, the more it seems to benefit you in the short term, the more it hurts in the long run. Look through the seven reasons below to understand why.

1. It causes a breakdown in communication.

Say you were fired from your previous job for showing up late, taking extra-long lunch breaks, and leaving early. When your new partner, who only knows you left that job to pursue a new opportunity, starts asking questions about what it was like working at XYZ Corporation, you find you have to keep lying to avoid suspicion.

There’s just something about lies of omission. The bigger the truth you’re hiding, the more it attracts questions.

When you keep trying to change the subject, your partner gets curious and does a little digging. Or maybe they decide they’d like to work at XYZ Corp, too, and they’re hoping your history there will give them an advantage.

Except, then they find out the truth. And kaboom.

2. Secrets can be harmful to your health.

Keeping secrets is stressful. And stress causes a variety of problems:

Your body doesn’t like to hold things in. It’s got designated exit holes for a reason. But when you’re holding in a secret, your whole body is bracing for the consequences. Because eventually, the truth comes out.

And when it takes longer than it should, it tends to hurt more.

3. Hiding a problem puts a hold on any constructive solutions.

While the truth remains hidden, you can’t do anything to improve the situation around it because it has to remain secret.

If, for example, you’re hiding the fact that you no longer have a job, it’s more difficult to actively search for a new one since you’ll have to arrange for job interviews at times when you can prepare for them without arousing anyone’s suspicions. This makes it more likely that you’ll remain unemployed until you can no longer afford to hide the truth.

At that point, you will have wasted precious time you could have spent going after new job opportunities and rallying your support team behind you.

Is Your Relationship Feeling Stale? 21 Ways To Put More Effort Into It

21 Bare Minimum Expectations You Should Have In a Partnered Relationship

4. Lies of omission lead to misunderstandings with consequences.

Picture a pregnant woman interviewing for a job with zero intention of sticking around once her baby is born in a few months.

She could decide not to tell them this, thinking, “I could use the money I’ll earn until I give birth. They don’t need to know I won’t be coming back afterward. And they’ll probably have an easy time finding a replacement for me.”

Unfortunately, hiding her intention to leave in a few months will have consequences:

She can avoid all this by being transparent about her intentions.

5. When the truth comes out, the loss of trust may be permanent.

When someone finally discovers the truth you were hiding from them, they’re likely to be angry. After all, you hid that information to steer their opinion of you in a more favorable direction, so they’ll feel manipulated as well as deceived.

And the more you gained by the deception, the worse they’ll feel about it. It’s one thing if you lied or were silent about something because you feared how it would affect their self-confidence or self-esteem. It’s another if you lied by omission to protect yourself.

Even if you thought you were acting to their benefit, though, they won’t trust you as much as they did before. And they might never again.

6. If you kept one thing secret, what else are you not telling them?

The more you lie, the easier it gets, and that goes for lying by omission, too. If you can justify keeping important details to yourself in one situation, you’re more likely to do the same in others. So, why should anyone trust you once they’ve learned the truth?

For example, if you hold off on telling someone you noticed another employee stealing office supplies, and that employee points the finger at you when he’s caught, your employer might well suspect you of doing the same.

And if you’ll lie by omission to avoid discomfort, why wouldn’t you lie again to keep your job?

7. What starts as self-protection ends as self-sabotage.

While you might have lied by omission to protect yourself or your reputation, in the end, the lie will cost you more than if you’d owned up to it from the start. In trying to act in your best interest or (to some extent) someone else’s, you end up sabotaging that good.

Even relatively innocent lies of omission — like neglecting to tell your partner you bought candy for your three-year-old to keep her happy — can contribute to a habit of omitting truths, which can then lead to bigger omissions, with bigger consequences.

So, in trying to avoid an unpleasant reaction in the short-term, you’re setting yourself up for a much more painful one down the road.

Now that you know what it means to lie by omission, you can probably think of moments when you kept certain details to yourself. And maybe you’ve yet to see any negative consequences.

But you might have noticed it’s gotten easier to lie. To make it harder, picture yourself in the other person’s shoes.

If you’d rather hear the unpleasant whole truth right up front than hear a pleasant half-truth — only to be blindsided later on — tell them what you’d want to be told.

May have you have all the courage you need to do the right thing.