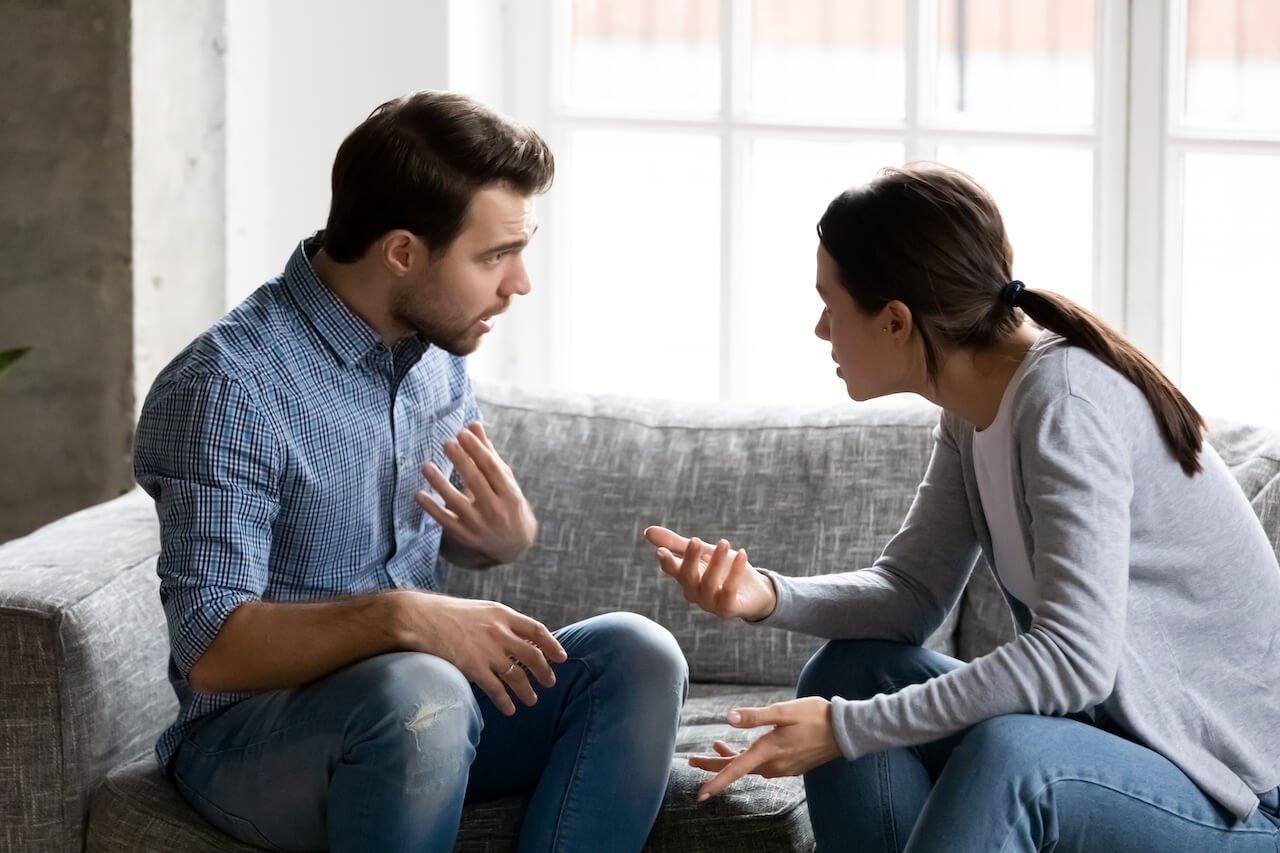 If you live with a self-centered husband and are fed up with his behavior and lack of regard for others, this post is for you.

When your husband is selfish and always puts his interests before yours, it shows in various ways.

And once you get some clarity on where his selfishness is leading your relationship, it’s time to consider your options.

You don’t have to settle for a marriage with a selfish brat.

Why is My Husband So Selfish and Inconsiderate?

You can honestly say, “My husband is selfish,” and you suspect nothing in this post will surprise you much. It’s another thing, though, to pin down the “why.”

Here are some of the most common reasons for selfish behavior:

23 Signs of a Selfish Husband

If you look at your marriage and think, “My husband always puts himself first,” let’s look at all the ways he might do that. Some of these will sound more familiar than others.

1. He couldn’t care less about your interests, goals, or ideas.

When you get a chance to talk to him, everything leads back to him. If he can’t use something you say to steer the conversation back to him and his concerns, he’ll just ignore what you’re saying or talk right over you.

Your dreams, ideas, etc., are just noise to him.

2. He acts annoyed if he can’t be the one doing most of (or all) the talking.

You might start the conversation, but if he can’t be the one doing most of the talking and steering the conversation to his favorite topic (himself), he acts annoyed, bored, or condescending.

If a conversation isn’t about him and how great he is, he’s instantly bored (or offended).

Conversations aren’t the only thing he likes to dominate. The selfish husband likes to be the one in control, at least when it suits him. How dare you suggest your authority as a parent is equal to his! He’s the “man of the house” and, therefore, lord of all.

4. He also has to be right—about everything.

He needs to win every argument, even if that means dumping an avalanche of irrelevant knowledge with a thousand tangents on your head to bewilder you into submission. Winning arguments is just harder when you’ve lost track of your will to live.

To him, admitting he’s wrong is a sign of weakness. And besides, he’s not wrong, even if you and everyone else thinks he is.

He just knows things you don’t. And if you confront him with evidence that he’s in the wrong, he’ll often gaslight you for it. Or he’ll tune you out.

6. He’s all about himself, how he looks, and what he wants.

Your opinions and preferences don’t matter. And how you make him look is more important to him than how you’re feeling or what you want.

Make him look bad to someone whose opinion of him matters more than yours, and you’re the problem.

7. He doesn’t thank you or show appreciation.

He doesn’t bother thanking you when you do or buy things for him, either because it doesn’t occur to him or because he sees those services and gifts as a natural product of your purpose in his life.

You exist to fill a role and to be what he wants you to be.

8. He waits for you to reach out with an olive branch if you fight.

Even if he was wrong, and you had every reason to call him out for his selfish behavior, he blames you for disrupting the peace and making him feel “attacked.”

He won’t say a word to you unless you expose your soft underbelly.

9. He doesn’t allow himself to be vulnerable.

Not with you. Not with anyone. To him, it’s just not worth the risk. Call him out for it, and he’s likely to point out all the reasons why he can’t trust you.

Or he’ll remind you that you knew what to expect when you married him; it’s on you if you can’t accept him as he is.

If you’re not living up to his self-centered expectations of you as his wife (as he perceives that role), or you’ve somehow reflected poorly on him and must be corrected or punished.

He’s more likely to criticize you when you’re hurting than to empathize and listen.

Call him out for rude or selfish behavior—for letting others do all the work while he did little more than talk—and he feels attacked and offended. It’s not a teachable moment for him; he just thinks you’re being mean and taking your petty frustration out on him.

12. He rarely (if ever) pays you a genuine compliment.

He might compliment you if it gets him something he wants. But it just doesn’t occur to him to say something genuine and complimentary just because.

You might as well be invisible to him unless he’s interested in sex and you’re conveniently nearby.

11 Top Signs He Is A Sigma Male

13. You can’t share your concerns or worries with him.

He’s not big on communication—especially the listening part. So, you’ve learned not to expect a sympathetic ear from him. Try to discuss your concerns about your marriage, and he’s quick to defend himself and gaslight you for anything that feels like an “attack.”

He may (sometimes) tolerate you showering him with affection, but don’t expect him to reciprocate. It’s always about what he’s comfortable with. Your needs come second. Affection always comes with strings attached.

15. He makes sex all about what he wants.

And if you don’t want to do what he wants, you must just not love him enough. After all, he’s certain you expressed openness to it before the wedding. Now he feels justified in reminding you of all the women who would have done those things (and more) for him.

16. He doesn’t bother with romantic dates.

You could set one up yourself and ask him to “save the date,” but there’s no guarantee he’ll actually show up for it unless you’re promising something he wants and can’t get elsewhere more easily. Romance is about the chase for him, and you’re already in his net.

He might ask for your thoughts about something, but if he doesn’t like your advice—i.e., he’ll dismiss it if it doesn’t match his ideas. Your words only matter if they agree with what he thinks.

You’re his backup chorus, not his equal. He didn’t marry you for your mind.

18. He’s clueless about the state of your relationship.

It doesn’t occur to him that your marriage is in trouble. And if you suggest as much, he’s more likely to gaslight you and blame you for seeing problems where none exist—or problems of your own creation.

The marriage must go on as is as long as it serves him.

19. He drops hints that he’s not that into you.

You’re okay for now. But he’s keeping his eyes and options open for better arm candy. He’d rather make sure you know how desirable he is (how many other women are checking him out — and aren’t you lucky he’s with you?) than show you how much you matter to him.

Because, ultimately, you don’t.

20. He barely acknowledges your presence when you’re in the same room together.

Whether you’re at home together or at a social event, he doesn’t interact with you more than he deems necessary. He doesn’t check on you to see how you’re doing, nor does he offer to help with anything. You might as well not exist until he needs you for something.

21. He doesn’t bother keeping in touch with you during the day (even if he could).

He doesn’t think about you when you’re not there unless he wants you to do something for him while he’s away. So, it doesn’t occur to him to send you a thoughtful text or call you to see how you’re doing or let you know he’s on his way home.

22. He expects you to pay for a disproportionate share of the household expenses.

He’s perfectly fine with you paying a disproportionate amount for the things you both use—or financing the lifestyle he feels entitled to. Ask him to cut back on a luxury item or two, and you might as well ask him to stop breathing. What is he, Cinderella?

23. He expects you to sacrifice your time off to be his personal slave or nursemaid.

You look forward to your days off, but he expects you to give up that time to tend to him or do what he wants. If you refuse, he’s quick to accuse you of being a selfish, neglectful wife. Your time is his to use.

How Do You Deal with a Selfish Husband?

Some husbands act selfishly on occasion but are, at their core, loving, giving human beings who want to do what’s best for the people they love.

They’re human, so they mess up sometimes—as we all do.

But the monumental selfishness of the man described above makes a real loving relationship impossible. Guys like this tend not to be in committed relationships for very long (if ever) because a two-way relationship really isn’t his style.

So, here’s how to deal with this guy:

Now that you can confidently say, “My husband is lazy and selfish, and I’m ready to do something about it,” what’s next for you?

Don’t waste time kicking yourself for not seeing the signs sooner. We all see what we want to. We all make excuses for red flags or write them off as “cold feet.”

You didn’t know then what you know now. And what you do now is what matters.