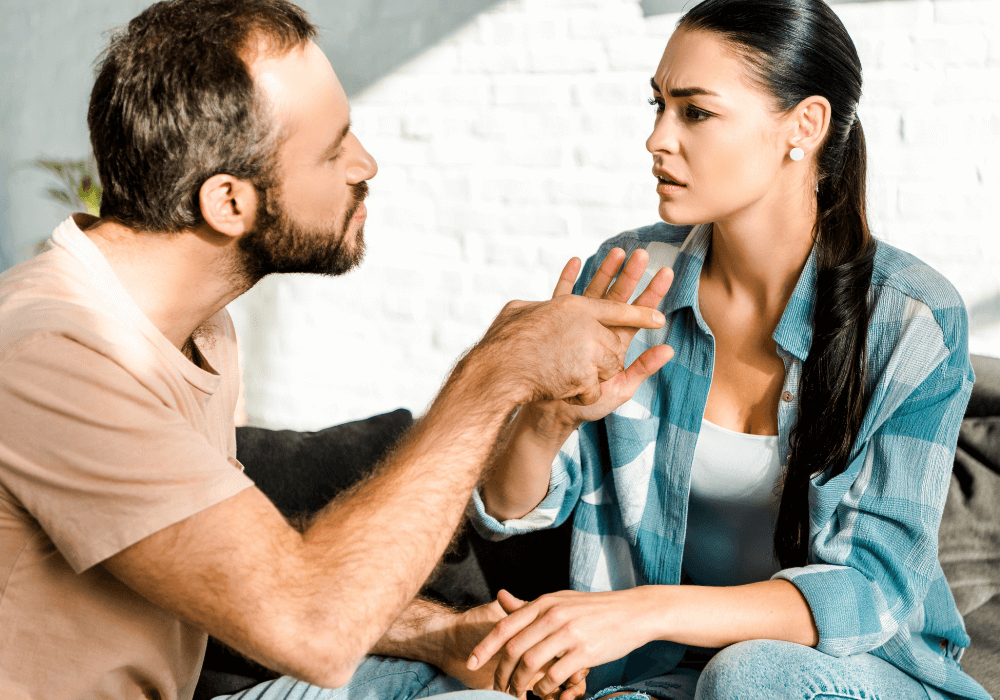 Your inner voice is raging: “My husband controls everything in my life! When did I surrender my autonomy?”

You know it’s not normal.

Not every wife you know is in a situation like yours.

Their husbands don’t demand access to their phones, their social media, their finances, or even their thoughts.

Where does it end?

And what can you do to get your life back and possibly even have a chance at a happy marriage?

Controlling husbands aren’t all the same.

But they do have some behaviors in common.

What Is Controlling Behavior in a Marriage?

A controlling spouse acts out of fear and a need to feel more secure in their relationship.

They’ll often start with small, seemingly innocuous habits and build on them until one day you realize just how much freedom you’ve lost.

Not every controlling relationship looks the same, though. It doesn’t always involve aggression or bullying.

13 Signs of a Controlling Husband

Let’s take a closer look at specific controlling behaviors before moving on to what you can do about them. Look through the signs listed below and make a note of the ones that stand out for you.

1. He uses guilt to manipulate you.

You made plans of your own for the weekend, but he wants you to do something with him instead. So, he uses your past against you, reminding you (subtly or not) of how you’ve wounded him in the past, and don’t you think you owe him this?

Even if you give in, though, you know he’ll use that past offense against you again. As long as he can use your guilt to get what he wants from you, he will.

2. He isolates you from friends and family.

It seems to bother him whenever you have social contact with family and friends — as if he’s certain they’re trying to convince you to leave him.

If you make plans to spend time with anyone but him, you can almost count on him to come up with plans he made just for the two of you. If you insist on keeping your plans, he plays the victim or uses whatever leverage he has to make you change your mind.

He’s always finding things to criticize, and nothing you do is good enough to pass inspection without some negative comment. Maybe at first, it motivated you to do better, but now… it’s the opposite of motivating.

It’s also undermining your confidence, which makes you less inclined to think you could attract someone who wouldn’t criticize you all the time.

4. He makes you feel crummy whenever he does nice things.

Every act of thoughtfulness has strings attached. Ask him for a small thing, and he acts as if your monumental selfishness will be the death of him.

“Happy now?” is something you’ve heard from him more than once. He’s trained you to  ask less of him and to be wary of every “act of kindness” he performs.

If you benefit somehow in the short term, you know he’ll find a way to make you pay for it.

5. You are always in his debt.

Call him out for something, and he’s quick to counter with something along the lines of “After everything I’ve done for you… this is how you treat me?”

You can never repay the debt he’s put you in. Every little thing he does for you adds to that debt, and you live in fear of the moment when he’ll call it in.

You know it’ll cost you more than anything he’s done for you has cost him.

6. He’s quick to jealousy (and paranoia).

If he sees you so much as smile politely at another guy, he’s instantly jealous — especially if that guy is someone you work with or see every day.

Your husband immediately sees him as a threat and is annoyed by your apparent inability to see that threat for what it is. He might even mistake your lack of concern for proof that you’re cheating on him.

He only spies on you because he can’t trust you. Nothing you do for him is enough, though, because his trust issues are about him — not you. You’re not to blame for his paranoia and quickness to judge.

If he checks your phone messages and stalks you at work, he justifies it by saying he’s only there to protect you. You know it has more to do with his need to control your every move.

Is Your Wife Controlling? 7 Signs She Is And How To Address It

He wants to know how you’re spending your own money. And if he disapproves of any of your expenses or money management decisions, he’ll expect you to surrender your passwords, etc., and let him take the wheel.

He says it’s for the good of your future together, but you know it’s about control. If he spends money you’ve saved, he justifies it and shames you for not trusting him.

Call him out for something, and if he can’t easily justify it, he denies it and calls your sanity into question. Or he describes it in a way that makes him sound better — and leaves you feeling as if you missed something important or jumped to an unfair conclusion.

He does it so often, you’ve started doubting your perception and judgment, which gives him more control and allows him to get away with even worse behavior.

10. His love and attention are conditional.

He rewards your good behavior — i.e., obedience and complete submission — with gestures of love and kindness. You know by now that if you defy him in any way, that loving behavior will quickly give way to verbal abuse, gaslighting, and contempt.

Until you submit and let him have his way, you won’t get any love or thoughtful attention from him. In his eyes, you’ve poisoned the relationship, and you deserve to be punished.

11. He only pretends to listen to you (when he’s playing nice).

Even when he seems to be listening and pretends to be genuinely interested in what you’re thinking and where you’re coming from, he’s quick to dismiss your points, defend himself, or turn your words against you.

When he does listen, it’s not to understand you but to win an argument, undermine your self-confidence, and further cement his position of influence over you.

He may not threaten to harm you physically, but a controlling husband knows what threats will work on you.

If you talk about divorce and have children together, he’ll argue that he’s sure to get full custody. If you’re preparing to leave him, he might threaten self-harm to change your mind. He’ll notice what works and keep using it.

Being with him is exhausting; he knows your limits and uses them against you. Disagree with or challenge him on something, and he makes it his mission to drain the life out of you until you yield and let him have his way.

He knows how much you hate fighting with him (or with anyone), and he uses that. One way or another, he exhausts your will to resist him.

How to Deal with a Controlling Husband

Now that you know the controlling husband signs, let’s talk about steps you can take to improve your situation and find your way to a happier life — with or without him.

Now that you’re familiar with controlling behavior, which signs struck you as most familiar? And what will you do this week to address your controlling husband’s behavior and get back your freedom?