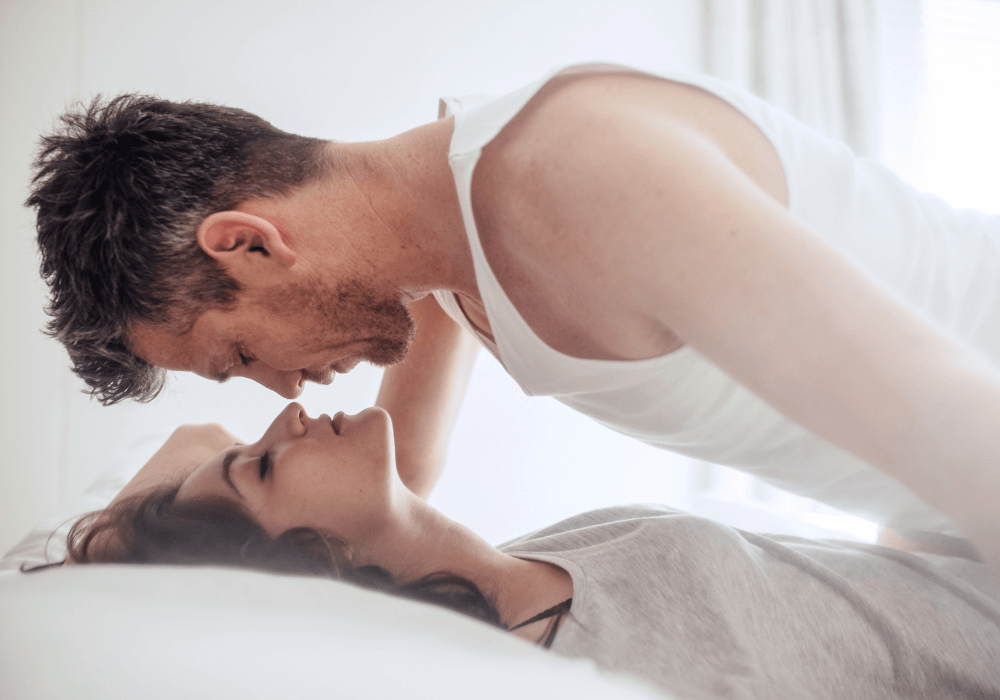 When it comes to lasting relationships, there’s more to “making it work” than being spiritually, mentally, or emotionally compatible with each other.

Being physically compatible matters, too.

Yes, having shared beliefs and values can help you feel more connected.

But overlooking the importance of sexual compatibility has consequences that eventually catch up.

So what are some compatibility questions you can ask yourself (and your partner)?

And what if you could take a sexual compatibility quiz to get clarity on your relationship?

So many couples enter into marriage with no clue as to the importance of sexual chemistry or whether their sexual personalities are a match.

Even in couples who aren’t married, one or both of them may be trying hard not to admit to themselves that something is off.

Generally speaking, the more of the following you two share, the more sexually compatible you’re likely to be:

Most want to believe their love for each other will overcome any differences (however serious) they discover after saying, “I do.”

Eventually, the reality is too glaring to ignore.

How Do You Know If You Are Sexually Compatible?

Obviously, it’s much easier to determine sexual compatibility with someone you’ve actually had sex with.

But a few great nights together doesn’t guarantee compatibility. And a few lousy ones doesn’t mean your relationship is doomed.

In general, keep the following in mind:

No one has a right to shame you for wanting great sex in your relationship. And if you can’t have that with your partner, chances are they’re feeling it, too.

Sometimes the best thing you can do is let each other go.

Welcome to our sexual compatibility test for couples.

For each of the following questions, give yourself:

Tally up your answers at the end of the test to find out what your sexual compatibility score says about you and your relationship.

1. Do you want sex more (or less) frequently than your partner?

If one of you wants sex a few times a week and the other is content with sex once or twice a month, at some point, the one who wants more will resent the one who’s happy with less.

2. Does it ever feel like the puzzle pieces down there don’t quite fit?

Not all men (or women) are built the same down there. Some are larger, smaller, or angled differently — inside or out. And if you pair a larger piece with a smaller opening, pain is the usual result. That’s just science.

3. Is sex with this person painful for you?

This relates partly to the previous question, but there are other reasons why sex can be painful.

Some women have a medical condition that causes their vaginal walls to spasm and tighten in response to any kind of penetration (pap smears, pelvic exams… and sex).

4. Does it take you longer (or less time) than your partner to reach orgasm?

If one of you gets there in seconds, and the other one needs several minutes to work up to it, sex will never be all that either one of you wants it to be (assuming you both want it to be mutually enjoyable).

5. Are you more (or less) interested in foreplay or cuddling than your partner?

In either case, resentment isn’t far behind.

6. Are you more (or less) inclined to use sex toys than your partner?

Maybe one of you wants to take the other to a sex shop to pick out some gifts for your next date night — but the other cringes and shakes their head apologetically. “Yeah, I’m not really into that, thanks.”

7. Do one or both of you use birth control?

And are you both on the same page with that? It’s not ideal if, for example, one of you is hoping for a baby and the other insists on wearing a condom, using birth control, or pressuring their partner to use something.

8. Are you more (or less) interested in using erotica/erotic films together?

If one of you likes to start things off with some visual (or auditory) stimulation, but the other would rather just get down to it, it’s worth talking about.

9. Have your sexual difficulties ever made you question your orientation?

Maybe you’re wondering now if you’re just not as into sex as you thought.

You’ve even looked into the asexual spectrum and identified (partly) with the term “sex-indifferent.” So, is that really you? Or are you just in a sexually incompatible relationship?

10. Are you more (or less) interested in kinky or rough sex than your partner?

Maybe your partner has an S&M fetish and wants to try bondage with you, but you’d rather not.

As for “rough sex,” you might be into it sometimes, but your partner seems to always want to go harder than you do. And it feels more abusive than enjoyable.

11. Are you more (or less) interested in talking about sex than your partner?

Maybe you want to talk about what you can do to spice up your sex life, but your partner is ambivalent.

As important as sex is to your relationship (unless you’re both sex-averse or sex-ambivalent), this is one thing that should be a regular conversation topic.

12. Are you more (or less) interested in trying new things?

If one of you is up for trying new things, but the other one is not, it’s worth looking into what’s behind that difference.

Is it aversion to a specific suggestion (but not to others), or is it a general distrust of anything but the missionary position?

13. Does your partner ever try to guilt you into doing things you don’t want to do?

You don’t really want to know your partner’s sexual history, but whenever you two hit a “dry spell,” he/she starts complaining about how the devil is tempting him/her with impure thoughts.

And your partner heavily implies that your lack of availability (or interest) is the problem.

14. Is one of you more interested in frequency than in quality?

Maybe, for one of you, frequent sex is the same as great sex. But the other wants to maybe back off on the frequency and focus on the quality of your sexy time.

Because, ultimately, that will contribute more to a healthy relationship than “getting it” more often.

15. Are you thinking you and your partner get along better without sex?

If you’re both sex-averse or indifferent about sex, it’s possible your relationship will do better without it.

If, on the other hand, one or both of you are not okay with giving up sex for the rest of your lives, this is a definite red flag. And it’s worth talking about.

Sexual Compatibility Scores and What They Mean

0-9 Points — You and your partner are on the same page — or much of the time, anyway. There’s room for improvement (as in any relationship), but you both find it easy to enjoy your intimate time together.

All in all, your sexual compatibility is something most couples would love to have.

If that last statement gave you a twinge of doubt, you might be leaning more toward mid-level compatibility, which comes next.

10-19 Points — There are enough warning signs to make you at least somewhat doubtful of your sexual chemistry.

At the very least, you should both agree to sit down and talk about what’s going on with you two when it comes to sex. If talking it out isn’t enough, definitely plan on some appointments with a couple’s sex therapist.

And if that doesn’t work, either, move on to the next score level.

20 – 30 Points — You two have more warning signs in common than anything else. If you’re tempted to think, “Oh, but that’s only about sex, and there’s more to our relationship than that,” know that your lack of compatibility in this area impacts other areas of your relationship.

If you can’t connect in bed, you’ll find it harder (or impossible) to connect anywhere else. On the flip side, your sexual incompatibility could point to a bigger problem between you.

How Can I Be More Sexually Compatible with My Partner?

If your sexual differences are taking a toll on your relationship, and you’re both committed to strengthening your relationship, the following steps can help you become more sexually compatible — and, ultimately, happier together:

That said, when you’ve done all you can, it’s also important to be honest with each other about whether sexual compatibility is even possible for you two.

If it’s not, you owe it to each other (and to yourselves) to consider whether you might be happier apart.

How Did You Score on the Sexual Compatibility Test?

Now that you have a better idea of what it means to be sexually compatible, how did you score on the quiz? And have you invited your partner to take it, too?

It’s unfortunate so many couples enter into marriage with little or no understanding of what sexual compatibility is or why it matters. For some, it takes years to get to the point where they’re willing to question what they’ve been told.

You deserve better. Everyone does.