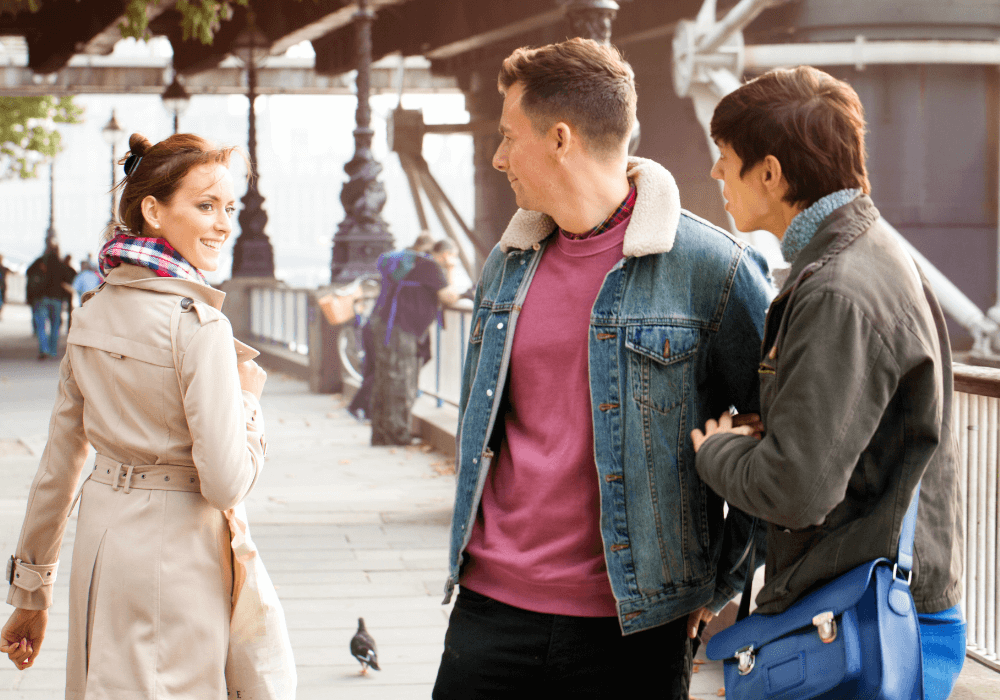 So your ex dumped you not too long ago, or maybe you left him.

It was painful for both of you because there really was chemistry and connection between you.

You’ve pondered the idea of getting back together, but your ex is acting weird.

You’ve seen him at parties or run into him at Starbucks, and he’s trying to act distant and cool.

But you know him, and there’s something behind the facade that says he still loves you (or at least isn’t entirely over you).

Is all of the bravado for real?

Or is there a wedge in his heart that wants to be pried open?

Let’s find out, shall we?

How to Know If Your Ex Is Over You

At first, you asked yourself, “Is my ex over me or just angry?” After all, he was super-pissed when he walked out the door.

Maybe you did something that made him so upset he broke up with you. Or you decided to break up with him because he did something not so cool.

But now you’re a bit confused. You’re getting mixed messages. But things are usually pretty straightforward with someone who is genuinely done with a relationship. You don’t second-guess yourself or him when it’s dead in the water.

If he’s completely done and over you, here’s what you’ll see:

If you see these behaviors, there’s no pretense to be found. It’s time to move on and stop worrying about what he’s feeling or thinking. You have bigger fish to fry.

But you’re here because you’re getting glimpses of something entirely different — something that makes you wonder if your ex is putting on an act.

11 Sure Signs Your Ex Is Pretending To Be Over You

Ok, let’s do a little investigative sleuthing and figure this thing out. If you’re wondering how to know if your ex is over you, there are some sure signs you need to watch out for. You may have already seen some of these.

1. He Texts You About Practical Stuff to Stay Connected

You’re getting texts like, “Did I leave my sunglasses at your place,” or “I heard your sister is sick. Hope she’s ok.”

Nice enough, but certainly not romantic or vulnerable. It’s pretty clear he’s on a fishing expedition to see if you’re softening or interested in talking about things.

He doesn’t need to send these texts. If he were really over the relationship, he wouldn’t text, or he’d ask someone else to reach out to you to find his sunglasses.

2. He’s Left Some of His Stuff at Your Place and Won’t Get It

Some of his essential stuff is still sitting in your bathroom and closet. Sure, he could go buy a new toothbrush, but what about those expensive Nikes? Why wouldn’t he come to get those?

Maybe it has to do with the fact that he’s harboring hopes you’ll be back together, and his things will once again have a legit home in your home.

If he was uncomfortable coming back to your house or didn’t want to see you, he could send a friend for his stuff — stuff you know he needs and wants.

3. He’s Left Stuff at Your Place and Uses It as a Reason to Come Over

You told him you’d leave his belongings in the garage for him to pick up while you’re at work, but he comes over to get them when you’re home. And he doesn’t enter through the garage and then leaves right away.

He comes inside to chat you up a bit, even while trying to maintain a detached demeanor. He might even ask what you’ve been up to and whether or not you’re dating someone — just to get the lay of the land.

If you haven’t moved on or he sees a glimmer of hope, then he leaves a few items behind, so he has a reason to come back again. “Oops! I forgot my Fry-Daddy.”

4. He Shows Up at the Places You Always Frequent

And like an apparition, he keeps “randomly” appearing in these places or areas of town and bumps into you. Even if he acts coldly toward you when you run into him, his appearance reveals another motive.

Of course, he’s trying to cross paths with you. Why else would he place himself where he knows you might be? He knows how to avoid you if he’s lost interest entirely.

These are not signs your ex is bitter and wants nothing to do with you. Quite the opposite. He misses you and wants to see you. He’s hoping the accidental encounter might lead to a conversation — which might lead to a reunion.

If you’re able to see who’s looking at your posts on social media, then you have a keyhole into the mind of your ex.

Has he been looking at your comments and photos? A lot? If so, he’s showing more than just curiosity. He’s been thinking about you and wants to know what you’ve been up to.

He may be looking to see if you’re dating someone else or whether or not you’ve removed pictures of the two of you together when you were an item.

Someone who has moved on emotionally has little interest in what you’ve been up. He’s too busy with his new life.

6. He’s Kept Pictures of the Two of You on His Social Media

Take a look at his social media and see if pics of the two of you are still in pride of place. If you’ve been apart long enough that he’s had plenty of time to remove them, but they’re still there, something squirrely is up.

He may tell your mutual friends that he’s over you, but actions speak louder than words. Why is your face all over his social media if he’s so over you?

Even if he doesn’t look at his accounts too often, he’s smart enough to know that a prospective future girlfriend isn’t going to want to see your adorable face plastered all over the place.

7. He Stares at You When You’re Not Looking

If you work together, go to school together, or keep running into each other, he tries to pretend to ignore you. But when you glance his way, he’s looking at you with those puppy-dog eyes.

When he sees you looking, his face hardens and turns red, and he looks away quickly. But you can see through it. His ego can’t allow letting you see his true feelings, especially if you were the instigator of the break-up.

8. You’ve Heard from Friends that He Is In Bad Shape

When you see him, he’s bitter and angry. He can barely look at you. But when his friends see him, he’s despondent. They’ve sworn you to secrecy because they don’t want him to know they told you.

But they are telling you because they suspect or know full out that he’s not over you and wants to reconcile. And maybe he knows exactly what he’s doing here. He knows your friends will report back to you, so he’s seeing if there’s a crack in the door.

Is there? If you’re still interested, you may need to do some sleuthing to find out how serious he is about reuniting.

9. He Keeps Calling to Check On You

Maybe he’s projecting onto you the feelings he’s experiencing. Perhaps this dating-around thing wasn’t what he expected, or he realizes he really screwed up by letting a good thing go.

He wants to inch his way back in by being mister nice guy, even while he’s saying everything in the dating world is just peachy. But the words sound hollow, and he seems lonely.

10. He Tries Too Hard to Appear Happy

His social media is filled with “life is awesome” pics and photos. He’s posted more since your break-up than in all the time you were together. And he knows you look at social media.

It appears he’s overplaying his hand by beefing up his happy meter. In your happiest moments together, he was never this over the top.

The times you’ve run into him since breaking up, he talks about his amazing life and all the fun things he’s doing. But your bullshit detector is on high alert. The gentleman doth protest too much. These are signs your ex is miserable — not happy.

11. He Tries Too Hard to be Nonchalant about Your Life

So you run into him at the grocery store, and he’s all smiles and pleasantries. “You look great! How are you doing? Hope life is treating you well!”

The thoughtfulness with the extra dose of sugary sweetness is enough to make you choke. Who is this guy — a Walmart greeter?

If he was over you, you might get a “Hey, how’s it going?” Or he might scoot to the next aisle to avoid bumping into you.

But Mr. Ray of Sunshine here is putting on an act that could win him an Oscar. Once he finishes his Herculean effort to show you, THERE’S NOTHING WRONG HERE, his body and demeanor slump from the exertion.

If you want to test it, just say, “I really miss you,” and see what he does. Dollars to doughnuts, his genuine joy will show up.

Is My Ex Pretending to Be Over Me?

If you’ve had to ask yourself this question, odds are, he’s still holding a torch for you. You’ve seen the signs, and your intuition tells you that his behavior belies his words.

Does that suggest he’s ready to get back together? Or that you are? Only time will tell. But for now, you might want to reexamine whether this relationship still has potential. Stranger things have happened.