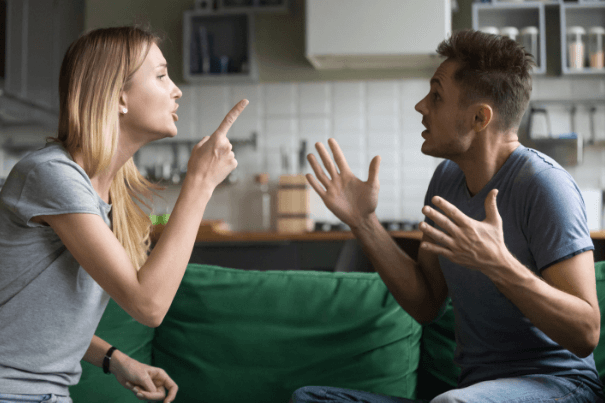 You’re in a relationship with someone who makes you feel off balance and disconnected from reality — as well as from the people you used to count on for support.

It’s gotten so bad you hear yourself justifying his behavior and questioning your own perception.

If he says you’re “crazy” or “losing your grip on reality,” then maybe you are.

Maybe he’s just the first one to notice and to care enough to say something. And if you can believe that, he can get away with anything.

The abuser and the abused can be either male or female, so I don’t use the male pronoun to call out men in particular.

Crazy-making abuse has more to do with personality, which is a combination of nature and environment.

In this article, we will cover all of the signs of crazy-making behavior and how to respond to it. (And if you want to find out now if emotional abuse is going on in your relationship then here is a free online quiz to help you know your options and take action.).

What is crazy-making behavior?

If you’ve witnessed or experienced crazy-making behavior, some or all of the following should sound familiar:

The goal is pretty much the same: to make you doubt your own perception of reality and to depend more on your abuser than on your own senses, judgment, and intuition.

The crazy-making abuser wants you to doubt yourself, so he’ll tell you what he wants you to do, and then — when you do it — he’ll use it against you:

In crazy-making relationships, the abuser keeps using these gaslighting tactics to make the abused feel small, stupid, incompetent, and crazy.

The goal is complete dependence on and deference to the abuser.

Watch out for the following signs of crazy-making behavior.

I’ll switch pronouns for each as a reminder of the fact that the abuser (as well as the abused) can be either male or female.

1. They ask you to do something and then deny they asked.

The crazy maker might tell you he wants to spend time with you this weekend and “Don’t make any plans.”

Then when the weekend comes and you ask what he has in mind, he’ll tell you he already had plans to do something by himself or with others, and he never said otherwise.

If you repeat the exact words he used, he’ll deny them and tell you that you’re making things up to guilt him into changing his plans.

But of course, he won’t change them no matter what plans you broke in order to be available to him.

2. They call you crazy on the slightest pretext.

It doesn’t really matter what you do or say.

You could tell the abuser you saw a particular tree, and she’d say those trees don’t grow in the area and you’re mistaken if you thought you saw one.

You could point out a specific constellation, and she’d tell you that you were wrong and insist the constellation was actually thus and such, and you were clueless or crazy if you insisted otherwise.

The crazy maker can use whatever comes out of your mouth as proof that you’re stupid, ignorant, or crazy to weaken your confidence in your own judgment.

The point is to make you doubt yourself and feel less confident that you know anything worth knowing.

So, it’s best to keep your mouth closed around her. Nothing good comes of trying to argue any point, even if you have proof to support your argument.

Victims of crazy-making behavior learn to keep quiet rather than risk being made to feel stupid or crazy.

3. They make decisions without you and claim it was your idea.

You talked to your boyfriend about buying a new couch, and you swore you agreed upon a particular model.

Then you come home to find that your boyfriend has ordered a completely different model that you don’t even like.

When you ask him to cancel the order and explain why he accuses you of changing your mind and insists you both agreed on the model he ordered.

He might have planned to buy the model you originally agreed upon.

But after visiting the store and flirting with another woman — who expressed her preference for another couch — ultimately ordered that one, hoping to one day impress the other women with it.

After all, you’re just a placeholder until he finds someone better.

But in the meantime, he’ll keep you off-balance and under his control.

And he’ll do everything he can to make you doubt every decision you make.

4. They criticize your decisions and belittle you for them.

Your girlfriend is quick to criticize every decision you make and to belittle you for them until you change that decision to suit her.

And if you do, she’ll probably change her mind and insist she had nothing to do with your change of decision.

Every decision you make is fair game because it gives her an opportunity to sabotage your confidence and make you feel ashamed for having decided on something without conferring with her first.

But even when you do talk to her before making a decision, she’ll deny having agreed to it, or she’ll insist that you mistook what she said.

And you’re crazy if you expect her to be pleased by the decision.

The only decisions she doesn’t criticize are her own.

5. They turn everything you do into an attack on them.

He’ll start a fight over anything. Because everything you say and do — even if it’s something he said he wanted you to do — is proof that you’re crazy, stupid, and selfish.

If you buy a new outfit or something that makes you smile, he attacks you for being selfish and thoughtless, even if he spent more money on something for himself.

If you say you’d like to spend more time together, he attacks you for using guilt to manipulate him into changing his plans to suit you.

He might also tell you he already told you what his plans were (even if he didn’t), and you just never remember what matters to him.

Because you’re selfish, and you can’t count on your memory for anything.

6. They use shame to manipulate you into feeling as though you’ve wronged them.

You tell your girlfriend you’ve just been called in to interview for a job you’ve wanted for months.

She goes nuclear — accusing you of putting your career ahead of your relationship and shaming you for accepting the interview invitation.

She insists it’s scheduled for a time when she wanted to go out together and do something.

Related: 22 Signs of an Unhealthy Relationship

It doesn’t matter if she never told you of her plans. She’ll swear that either she told you and you forgot (again!) or that she was trying to surprise you, and you ruined everything (again!).

And if she succeeds in shaming you into canceling the interview, she’ll make other plans for that time — plans that don’t involve you.

She’ll tell you that you’re crazy for expecting her to stay available to you when you clearly care more about your career.

7. They expect you to do what they want all the time.

In other words, “Read my mind, and do what I want or what I think is best.”

But if you try to do what your abuser would do, the crazy maker will turn on you for whatever you did in their name.

Everything you do is fodder for criticism.

You can’t do enough for them, and what you do is done wrong, done too late, or done with the wrong attitude.

And even if you do exactly what you know your abuser wants you to do, they’ll either deny they wanted you to or they’ll act as though you misread them and that you “just don’t get it.”

Whether you describe your abuser’s tactics as crazy-making, gaslighting, or narcissistic behavior, it all falls under the umbrella of abuse.

The goal is the same, even if the behavior looks different from one abuser to the next.

The lingering effects are damaged self-confidence, lower self-esteem, and a compromised ability to trust others.

Living with a crazy-making abuser makes it harder to believe in the existence of unconditional or selfless love.

It makes you feel more alone, so you’re less likely to break free because the abuser has convinced you that you’re helpless without them.

Maybe you didn’t know — before this relationship — how unreliable your mind was, but now that you “know,” you feel ill-equipped to start fresh on your own.

The lingering question becomes “What if they’re right about me?”

So, you need to be around people who don’t treat you the way the abuser does.

You need to spend time around people who love you as you are and who build you up.

Never for a second think you deserve the abuse and don’t let the abuser take any more of your life than he or she already has.

You have a right to want to be with someone who doesn’t make you feel small, stupid, or crazy.

May your courage, compassion, and resilience influence everything you do today.

1 thought on “Crazy Making Behavior: When Your Partner Manipulates To Make You Doubt Yourself”