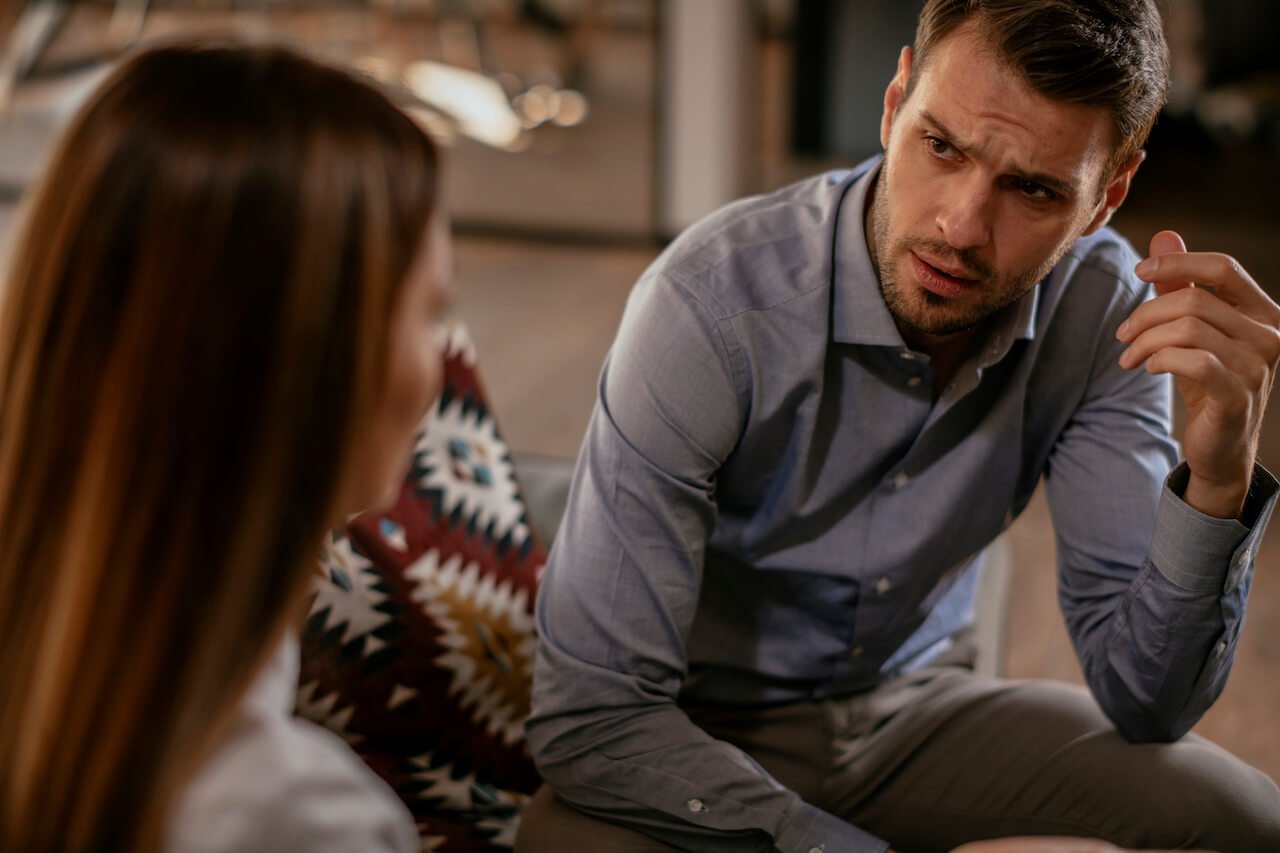 What happens when narcissists know you’re onto them?

Reactions largely depend on the person, situation, and the severity of their mental health condition.

However, in nearly all cases, when a narcissist realizes you are done with a relationship, they don’t react well.

The same goes when you confront them with accusations or threatening facts.

Therefore, it’s wise to prepare before engaging a narcissist with challenging information.

But before we unpack the nuts and bolts of dealing with a narcissist who knows you’re onto them, let’s make a distinction.

Everyday narcissism — aka self-centeredness — is a common human trait we’re all afflicted with due to our hardwired survival instincts.

In fact, most of us are more self-centered than we realize.

However, Narcissistic Personality Disorder (NPD) — which affects about 5% of the population — is an extreme behavioral condition rooted in childhood trauma that causes carriers to cling to a grandiose sense of self.

People with NPD aggressively reject criticism of all kinds, and things typically grow tense when they’re confronted with hard truths.

What Happens When a Narcissist Is Exposed?

What happens when the narcissist knows you know their secret?

Typically, they perceive criticisms as dangerous threats and lash out at the messenger.

Why do they behave this way? Typically, NPD is rooted in deep-seated childhood stress.

When someone with the disorder senses that a coworker, partner, friend, or even child sees them as something less than perfect, the realization triggers loneliness and abandonment daggers, which immediately prompts them to throw up emotional shields and fight back.

In nearly all cases, the first thing they’ll do is move to invalidate the person confronting them.

From there, it can go several ways, depending on the surroundings and other mitigating factors.

How Will a Narcissist React if He Knows That He Is Losing Control Over You?

Narcissists don’t relinquish control easily. They’re hardwired to resist subversion at all costs, resulting in the ultimate “dish it but can’t take it” personality.

Moreover, they live in fabricated worlds guided by delusion. “Truth” becomes a subjective concept when dealing with a narcissist. They may not even realize they’re lying.

So how does a narcissist act when found out? In many instances, they’ll:

There are several things you can do to prepare yourself for the wrath of a narcissist. But remember that some NPD patients are more dangerous than others, which may require further protective action.

The first order of business when confronting a narcissist with the truth — either about their condition or something else — is to protect yourself.

Does the narcissist have access to firearms or other weapons? If so, consider having the conversation somewhere public where they cannot immediately access them.

Is there a possibility the narcissist will attack you? Again, if so, don’t confront them alone. Make sure you have a place to go if things go south quickly. Preferably, it should be somewhere the narcissist doesn’t know about.

If the narcissist in your life is more hot air than dangerous, ignoring their temper tantrums is one of the most effective tools. In these cases, lay your truth on the table and then don’t stick around for their invective. With milder cases, it can be that simple.

If you must bring a hard truth to a narcissist’s doorstep, and you have the resources, set up a therapy session ahead of time.

People with NPD can be ruthless when they feel attacked, and the fallout can wreak havoc on your mental health. A few therapy sessions may go a long way in offsetting the emotional onslaught.

Also, consider talking to a therapist before the confrontation. They may have helpful tips tailored for your exact situation.

4. Don’t Fall for the Charm Offensive

Steel yourself against the charm offensive! It may sound counterintuitive, but many narcissists will dial up the magnetism when they feel threatened. Their minds fear abandonment, so they do what they must to keep people around.

This tactic works very well on people who crave validation in the form of companionship. If that’s you, prep doubly hard for the confrontation.

Whether personally or professionally, setting boundaries is always a good idea, and it’s downright essential when dealing with a narcissist — especially if you’re bringing them information or news that challenges their inflated sense of self.

Before going in, write down your boundaries. Mull them over. Commit to them. When the time comes, you’ll be able to access them more readily.

Narcissists are master manipulators with a talent for spinning situations and blaming everyone else for their misdeeds. Often, they use the people in their lives as projection dumpsters. So before you confront one with something difficult, gird yourself!

Because they will try to flip the script and cast you in the role of malcontent. Don’t fall for it. Don’t let them weasel their way into your sanity.

7. Get Your Legal Ducks Ordered

If a pathological narcissist figures out that you’ve figured them out, things could get ugly. If you’re married or share children, it may be time to get your legal ducks in a row.

Find an attorney that works just for you — not one that’s connected to the narcissist in any way.

My Great Aunt Molly used to dole out one piece of advice, over and over: “Ladies,” she would cackle, “make sure you have your own money in your own bank account!” It was a trailblazing bit of advice from an elderly woman — and it’s counsel that every “lady” should heed!

Life is a chaotic roller coaster, and stashing a bit of “running away money,” as the British aristocracy used to call it, makes practical sense.

This is doubly true when you’re dealing with a narcissist who may snap at any moment. If they blow up, and you need to make a quick escape, having an account that they cannot drain or freeze could prove invaluable.

This bit of advice may sound dramatic, but you can never be too careful when it comes to a triggered narcissist.

Keeping family and good friends in the loop is wise. We’re not suggesting you post about the situation on social media, putting the world on notice. In fact, that could backfire.

But your close circle should understand what’s going on. If you plan to confront the narcissist at a given time and place, provide them with that info, too. In some cases, you may even want a buddy to come with you as a backup.

Only do this if the narcissist in your life is dangerous. Moreover, follow the protocol established in your workplace. Caveats aside, letting someone at work into the loop may prove beneficial.

Not only can they sound the alarm if something goes awry, but they may be able to establish you in a better position, giving you the freedom to escape a difficult home situation.

13 Ways to Manipulate a Narcissist Without Compromising Your Integrity

11. Block them on Social Media

Narcissists love to slather social media with smear campaigns against people they perceive as threats. Not only will they smother your public-facing accounts and DMs with nasty comments, but they’ll hit up your connections.

Unless the situation is severe enough to warrant a restraining order, the best course of action is blocking. Encourage your friends to do the same.

Although it feels impossible at times, letting compassion lead the way can be a soothing balm. After all, pity is a less stressful emotion than anger. Understanding allows us to proceed calmly. Indignation can send us off a ledge.

So when dealing with a narcissist, try to remember that their behavior is rooted in trauma. Or, to state it more simply: they are the way they are because someone treated them like dirt at an early age.

Protectively and reflexively, they developed an extreme defense mechanism in the form of NPD.

If you already have a narcissist cornered, try to be the bigger person and don’t further poke the already flailing dragon.

Say what you need to say, but refrain from venturing off into tangents that will only exacerbate and escalate the situation.

14. Be Firm in Your Decision

Once you confront a narcissist, it’s vital to stay firm. If they see an opening to manipulate the situation — or your perspective — they will dive in headfirst. If you waiver, they’ll use it to their advantage.

They feast on indecisiveness and are skilled at leveraging it to move people around like pawns. Be aware and stand your ground!

If you live in an NPD household, and the afflicted party realizes you’ve figured them out, it may be time to move out. Their need to control may reach critical mass and create an unhealthy environment.

If they physically abuse you in any way, get out as soon as possible. Nor should you tolerate verbal abuse. Though it may not be an immediate threat, it’s still dangerous and can lead to tragedy in the worst cases.

What Happens When You Confront a Narcissist With the Truth?

Confronting a narcissist with the truth can be scary because they frequently fly off the handle. So before you make a move, consider the following:

NPD is a psychological condition for which we should extend compassion. But compassion doesn’t require you to put yourself in harm’s way — physically or emotionally. And if a narcissist catches on that you’ve figured them out, it may be time to change the dynamics of the relationship — or end it altogether.