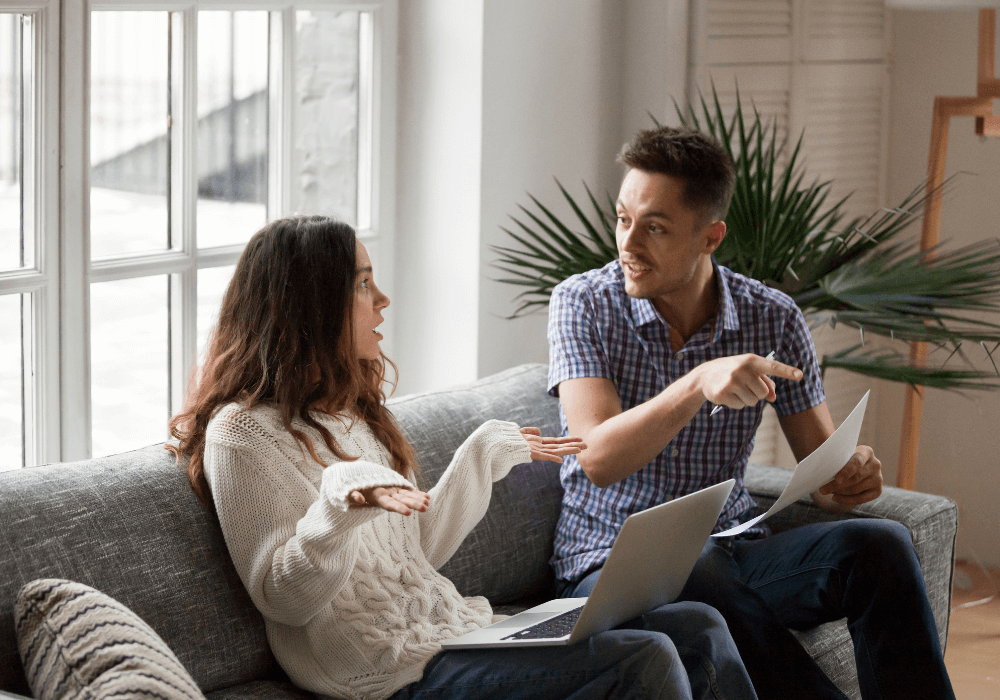 Tolerating your disrespectful husband will only prove to him that the behavior is acceptable.

Things will not get better without intergvention once he has developed the habit of dismissing your feelings, making fun of you, or excluding you from important decisions.

You may or may not be contributing to the behavior, but self-reflection is part of the process of solving this toxic problem that will hollow out your marriage.

Often you will have to control your reaction to the situation before you can succeed in getting him to reform his behavior.

What you are doing now is not working, which suggests that you need a new strategy.

Why Is My Husband So Mean and Disrespectful to Me?

The answer to this question can take many directions. Personality, life situation, culture, and upbringing produce different reactions. If an acceptable level of respect once existed between you and your husband, then something new has entered the equation to alter his view of you.

If he has always treated you poorly, then the answer lies with his personality and your inability to set boundaries and standards for yourself from the beginning.

For many husbands, stress is the number one factor contributing to his disrespectful treatment of you. This pressure keeps his thoughts and feelings foremost in his mind. He may have no bandwidth for even thinking about how you feel.

He is probably failing to process all of his feelings. When it comes to you, he will think, “You don’t have problems. I have problems.”

Or, he may believe that he made a sincere effort to solve your problems, but he failed you, or you rejected his solutions. This sense of failure or rejection can make men quit trying.

Most people, including husbands, have to behave respectfully to everyone in the outer world of work. When they get home to their safe place, they stop trying. Your husband is rude because he has stopped investing energy in his closest relationship.

In his mind, you’re just supposed to accept him and deal with it. He may see himself as the boss and you as the employee.

If he is in a position of authority at work, he may treat his underlings with disrespect. This relationship could spill over into the home.

Conversely, he may feel disrespected by the boss at work but enjoy flipping the script at home to soothe his feelings of powerlessness in the rest of his life.

So many reasons could make him disrespect you, such as:

What Are Signs of Disrespect?

All spouses sometimes have to have frank conversations that could be unpleasant, but that does not have to descend into disrespect. You are not being treated correctly when any of these examples of disrespect in marriage happen frequently:

How to Deal With a Disrespectful Husband

A great starting point is to examine how you treat your husband. Do you retaliate with name-calling when he does it to you? Are you dismissive of his feelings? Do you ignore his opinion?

If that is going on, you might be two peas in a pod trapped in the same cycle of poor communication. Whether your starting point is a saint or sinner, you need to set a good example by showing him respect.

You don’t have to agree with him, but you need to be civil and speak in the way you’d like to be spoken to.

Needy is another word for insecure. Your insecurity can make your communications come across in a way that your husband feels is unacceptable. This negative feeling may be triggering your husband’s disrespect.

Needy people become jealous easier. For some women, the fear of “losing him” drives them to seek reassurance from their spouses far beyond what is normal.

They want their spouses to fix everything for them, and this burden drives a wedge between them.

A husband might grow so weary of putting out a wife’s emotional fires that he begins to belittle everything she says because he wants to send the message that everything is not his problem.

He literally can’t manage your day-to-day emotional needs on top of his own. Probably no one can.

Perhaps he’s not listening to anything you say and not processing the meaning of your words. When you say that he hurt your feelings, he immediately becomes defensive instead of considering whether you have a valid point.

If you write him a note and explain the problem, the words might penetrate his brain. Processing written words takes him out of the confrontational person-to-person setting and leaves him holding written evidence.

4. Consider His Criticism of You Carefully

He might have a point about some things that you do. He might not express himself diplomatically, but maybe you do need to correct some behaviors. This suggestion is not meant as a “blame the victim” scenario.

Rarely is one person in a marriage “perfect” and the other totally “imperfect.” Unless he is lying, he could be telling you why he does not respect you, at least at that moment in time.

If you have some areas to work on, then you can try to improve and take away his excuses for blaming you for his rude outbursts.

Demonstrating that you are willing to respond to constructive feedback will set the example that you respect him but expect him to reciprocate the same courtesy.

Outside of disrespectful encounters, try to initiate conversations that could make him connect with you. If the opportunity arises, show an interest in his thoughts and feelings.

If you can get him to share more of his inner world, he may develop emotional intimacy with you and trust you more. In many ways, trust can be an antidote to disrespect.

10 Stages Of A Relationship From Hello to Goodbye

6. Calmly Express Your Pain at His Comments

Take a breath, count to ten, or do whatever it takes to stay calm and avoid an angry outburst. Then say something like, “I don’t like the way that you’re speaking to me” or “Stop putting me down.”

This tactic, when deployed calmly, can alert your disrespectful husband that he has crossed a line.

Many people give little thought to the impact that their words have on anyone’s feelings unless directly told. Telling him that he is hurting you may remind him that he does not want to do that because he loves you.

Defend yourself against disrespectful statements with phrases like, “That’s not how people who love each other speak to each other,” or “I expect better treatment from you.”

Years of being patient and forgiving have likely transformed you into a doormat. In this state, your self-esteem will nosedive. Try to prevent yourself from sinking so low by insisting that your spouse treats with a certain level of respect and courtesy.

Instead of letting a disrespectful episode expand into a bitter, useless argument, end the interaction. Leave the house if you have to.

Make it clear that his behavior is unacceptable. It might get his attention and potentially give him space to contemplate his behavior.

9. Monitor Your Tone of Voice

He will be much more sensitive to your tone than the actual content of your words. Try to maintain a calm and civil tone when you explain why his words hurt you.

Keeping your voice neutral will be challenging, but it’s another way you can model good behavior for your husband and show him what you need.

If you can turn on the audio recorder on your phone during one of your disrespectful encounters, you may gain great insights. Listen to it later alone when your mind has calmed down a little.

Approach it like a coach and athletic team reviewing video after a game.

When you’re ready to discuss the problem with him, play clips from the video that illustrate his disrespect. Ask him “Do you sound like a loving person right then?” or say “This is an example of you hurting me.”

This tactic may be especially useful with a husband who gaslights your feelings by saying that they are not real or that he never said what he said.

11. Ask Someone Else for Help

You may have the option of asking someone like a trusted friend, pastor, or close relative for an opinion. Explain the problem and ask if that person can tell your husband how upsetting the behavior has become for you.

Some people will never acknowledge a problem until a third party confirms it. If someone that your husband might respect points out his negative behavior, he may feel like he is losing others’ respect because of how he is treating you.

Communication difficulties are the bread and butter of marriage counselors. These professionals can teach you viable strategies for replacing hurtful language with messages that accomplish your goals.

Even if your spouse will not attend sessions with you, the counselor can still provide helpful tactics for maintaining your self-esteem and promoting positive communication.

13. Focus on the Positive Aspects of Your Life

Some people don’t place value on something until it’s gone. This does not have to mean divorce. You just have to shift the focus off of your husband.

You can instead apply your attention to the things in your life that you like. If you have a job, then you can give more of your energy to it and work toward professional success.

You may choose to volunteer for causes that interest you and spend your free time on a productive activity.

Instead of making time for your husband, who does not respect you, you can make time for people who do. He may eventually notice and complain about being sidelined.

That moment could be an opportunity to cite your past complaints about his disrespectful attitude that he refused to acknowledge whenever you tried to discuss it.

He may listen now. If he never notices or cares, then at least you are living your life involved in activities that please you.

Your Disrespectful Husband Can Improve

Your husband is not necessarily irredeemable. People can recognize their errors and choose to improve their behaviors. Deep down he may want to have a loving and successful relationship.

Exhaustion, the stress of life, and sexist cultural forces may have worn him down until he simply takes your presence for granted.

Ending his disrespectful habits will require you to balance setting firm boundaries about how he treats you and showing that you love him.