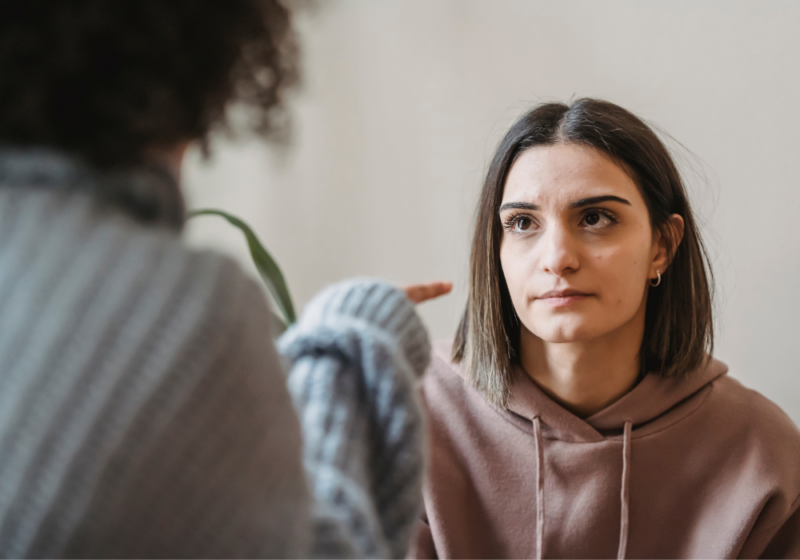 Maybe the relationship has always been tainted, or perhaps the fissure is new.

Whichever the case, you can no longer deny that something is a bit rotten in the state of one of your friendships.

But you’re unsure if you’re reading the signals wrong. After all, relationships of all stripes experience ups and downs.

In this post, we’re laying out what relationship red flags look like and how to deal with them.

What Are Friendship Red Flags?

Generally speaking, a “red flag” is a warning signal. They may be blatant signs, like discovering your new friend is a convicted murderer.

Other times, it may be something intangible, like your stomach jumps when they say something, or you notice behavior that doesn’t quite cross the line but doesn’t sit well.

Sometimes, red flags are valid. Other times, they’re tainted reactions to traumas from our own lives and, therefore, not very fair.

The key is learning to figure out which is which. What are some guide posts?

What Do You Notice When You Have a Bad Gut Feeling About A Friend?

What signs may you notice if a friendship is headed south? Let’s take a look.

Think of the feeling you get when someone says something upsetting or unkind.

Suddenly, a queasy feeling emerges around the stomach and solar plexus chakral node; it torpedoes through the rest of your body; your brain switches into overdrive, and the only way you can verbally explain the sensation is that it “doesn’t feel right.”

This is our body’s way of saying, “Potential Danger Ahead!” Broadly speaking, what you’re feeling is stress hormones bum-rushing your body.

Nothing Ever Goes Right

Are you always canceling plans with one another? When you do get together, do things frequently go wrong? Not to sound too woo-woo, but it may be the Universe’s way of warning you that the friendship isn’t the best path for you at that time.

The Relationship Is Overwhelmingly Negative

Do you ever have fun together, or is it always a commiseration session?

Please don’t read us wrong. We’re not saying you shouldn’t open up and share your difficulties and hardships with friends and family. Of course, you should! We all need people to get through this thing called life.

But if the only thing you do is bitch and moan when together, it may be a red flag.

Someone Always Wants to Cancel

It’s an hour before you’re supposed to meet up, and you’re flipping through your mental index of possible excuses for why you need to cancel. Or maybe they do that to you. Whichever the case, if you’re not psyched to see the person, there’s a chance you don’t have a genuine bond.

17 Red Flags In Friendships That Change Everything

We’ve discussed what it feels like when a friendship starts to sour, but what are some red flags in a friendship?

You’re having a conversation, and they drop a passive-aggressive dig out of nowhere. When you point it out, they scoff and insist they were “only joking” and demand that you “lighten up.”

This is passive-aggressive behavior, a form of gaslighting, and it’s a red flag. Add an extra alarm if they expect you to be sensitive to their triggers but don’t pay you the same respect.

2. You Catch Them Lying

We’re not going to be unrealistic goody-two-shoes and insist that all people who lie are terrible. Because, in truth, we all do. Sometimes we lie to avoid an unwanted conversation or situation; other times, it’s to spare someone’s feelings.

But there’s a line.

If you discover someone is lying about major things or stupid, status-related things that hint they’re more about appearances than authenticity, it’s a red flag.

3. They Act Differently Around Certain People

Are they a chameleon? Everything to everyone? Or worse, do they treat you poorly around certain people they deem “superior?”

If this sounds familiar, be careful. Consistency is important when developing friendships, and it’s tough to form meaningful connections with people who are constantly jockeying for status.

A lot of friendships are built on shared disdain. You both dislike the same person and initially bond by talking trash about said person behind their back. The more time you spend together, the more you disparage everyone and everything.

For a time, this type of relationship may be satisfying and helps you feel seen and heard. But at some point, it’s healthy to take a step back and consider whether your complaints and negativity are really a reflection of your issues. Are you projecting?

Moreover, if the friendship never moves beyond this stage, and all you ever talk about is other people, you’re in a toxic situation.

5. They Gossip About You

Has word gotten back that your “friend” is gossiping about you? It feels horrible, right?

Granted, sometimes, in the heat of a frustrating moment, we all say unkind things about people we genuinely love. If the friendship is real, one-off blips are easily overcome — especially if the offending party takes responsibility and genuinely apologizes.

But if they’re blowing up your business all the time, the relationship is firmly in the red-flag region.

6. You Make Effort and They Don’t

A one-sided friendship gets old very quickly. Unfortunately, many people find themselves stuck in the cycle for various reasons. Maybe the other person is going through a tough time and isn’t self-aware. Or perhaps you’re overbearing and offer to do things when nobody asks.

Try to be as objective as possible about the situation. If it’s a “you” problem, work on it. If you’re being used, get out.

Does the person under consideration take accountability for their actions and mistakes? Do they apologize when appropriate? When you point out something they did had a negative impact, do they immediately get defensive or listen and consider your point?

Individuals who throw tantrums instead of taking responsibility may not be ready for a mature friendship.

Sometimes friends aren’t absent and mean but instead clingy. Sure, we’re all a bit needy at certain points, but latching onto another individual and expecting them to be on-call at most times is a form of destructive codependency.

This type of behavior may be a symptom of unaddressed trauma, so be kind. But you don’t need to be someone’s unpaid therapist. If you’ve been friends for a while, you shouldn’t dump your pal for navigating a rough period, but setting boundaries is appropriate to salvage your mental health.

9. Boundaries and Requests Are Ignored

Well-drawn personal barriers help you maintain good mental health. Being supportive of friends and family is important, and you should be there for them when they’re going through a rough patch.

But don’t let people take advantage of you.

When friends ignore boundaries that were drawn and lovingly communicated, it may be time to take a step back and consider whether this person is someone who fits into your life.

10. The Relationship Is Marked by Conflict

Sure, we all have fights and arguments with our pals and family. But if you’re constantly bickering and locking horns with a particular friend, it’s worth taking a step back and assessing why.

Is one of you going through a rough patch? If so, tension is understandable. Moreover, you shouldn’t throw away good friends. Relationships change. Sometimes, it just takes a challenging conversation or two to get things back on track.

Are You Highly Attracted To Older Men?

Want To Learn The Art Of Being Witty? 19 Tips To Improve Your Wit

But if that doesn’t work, it may be time to move on.

11. They Have Double Standards

Double standards are maddening, especially when coming from a friend. What ends up happening in most unhealthy relationships is that one person expects to be treated better than they treat you.

They hurl snarky and passive-aggressive quips at you, but the second you bring it up and ask them to refrain from belittling and dismissive actions, they act like they’re the injured party.

It’s classic “dish it, but can’t take it” behavior — and a friendship red flag.

12. They Always Center Themselves

You land in the hospital, and all they want to talk about is the time they were in the hospital. You comment on a TV character, and they assume you’re judging them. When making plans, they always prioritize their wants and needs.

Centering oneself to an extreme degree is never a good look, and you should watch out for people who do it.

13. Your Gut Is Screaming

Sometimes our gut feelings lead us astray because the tension is rooted in our shadow selves. Other times, though, it’s spot on.

Learning to understand and trust your intuition is an essential part of self-development. If your insides are screaming that something isn’t right with the friendship in question, exploring the matter is worth it.

14. They Use Gaslighting and Guilt-Tripping

Gaslighting is trying to manipulate someone into thinking they are at fault. People with narcissistic personality disorder are especially prone to the behavior, but it’s also a hallmark of toxic relationships.

If you feel like your friend is always trying to point the finger at you when they’re equally or wholly to blame, it’s a glaring red flag.

Something good happens to you. You’re excited and share your news. In response, you get either a mild acknowledgment or even…crickets.

True friends are genuinely happy for each other — even when one person is having a hard time. You shouldn’t have to hide your wins from them.

Please don’t read us wrong. Being thoughtful is essential. And yes, some conversations are better left for another time. But if someone can never be happy for you unless they have the same thing or more, they’re probably not great friend material.

16. They Don’t Ask You Sincere Questions

People who truly care about each other ask questions. They’re invested in your life, and you are theirs. If you have a “friend” who never asks you questions about your life, it’s something to consider.

Another red flag is if they don’t ask “follow-up” questions. For example, let’s say you have a family emergency and must cancel plans. A true friend will reach out within two to three days to check in and see how everything is going.

Mild jealousy is part of the human condition — something we must all deal with. But when envy grows into a looming, controlling force in the relationship, things rarely go well if the situation isn’t rectified.

Finding yourself in a friendship where the other person always competes with you is sad and frustrating. But it’s better to get out than navigate that minefield.

What To Do When You See These Red Flags in Friends

Your stomach is in knots because the friendship you’re concerned about is wreathed in red flags.

So now what? Do you end the relationship? If so, how?

And again, before you let go of someone — especially if they’re an old friend you genuinely care about — make every effort to have an open, vulnerable, honest, difficult conversation.

Losing friends hurts, and if you don’t have many, you may feel the need to hold onto every one of them — even if they’re bad for you.

But here’s the thing: shedding relationships that no longer serve you makes room for genuine friendships. Getting involved in groups and hobbies you enjoy is key to developing connections.

Also, understand that most people don’t have nearly as many friends as they claim, so you’re probably not as much of an outlier as you may think.