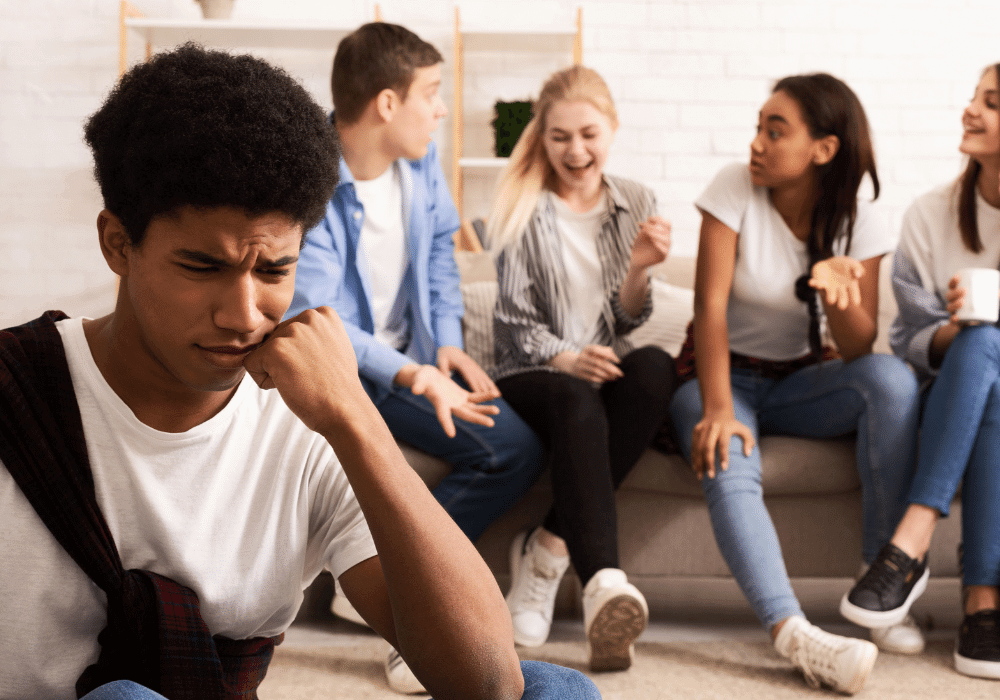 How do you know if people are talking about you behind your back?

And once you find out they are, what can you do about it?

It’s one thing if they’re planning a surprise (one you’ll like).

It’s a very different thing if they’re saying things they know you wouldn’t like. Not cool.

You want to know why they would do such a thing.

What kind of person is friendly to your face but badmouths you behind your back?

Let’s start with that question.

People Who Talk Behind Your Back

People who talk about you behind your back generally do so for one of the following reasons:

Granted, that last one makes it sound like you’re responsible for their actions when you’re not. They may be so used to blaming others for the way they feel, they’ve forgotten they have the same power you have: No one can make them feel inferior.

When people talk behind your back, it says more about them than about you. And what it often says is that they’re struggling with their own identity and self-confidence.

If these are friends who talk behind your back — or people you thought were your friends — it’s time to take a closer look at the possible reasons for this behavior.

Why Do People Talk Behind Your Back?

You want to know why they’re doing this to you. What do they gain from it? And have you done the same without realizing what you were doing?

The fact is, gossip has a place in every culture. But it’s still worth looking into the reasons behind it. Once you know that, you can decide on what to do about it.

1. They’re used to talking about people behind their backs.

Some are just so used to talking about people — even people they love — they’re quick to join in a conversation about your aggravating habits or something you said the other day that surprised or offended them.

With some people, this is just a bad habit — with no conscious ill will against you. If they’re grown up around people who listen to and share gossip, they’re more likely to cultivate this habit and see nothing wrong with it.

“You know we all do it,” might be a favorite excuse.

2. They’re inveterate gossips and will use anything about you as a “gossip prompt.”

Behind their gossip is, if not ill will, at least a casual disregard for the way their words might affect you or anyone else they talk about behind their backs.

Gossip is their favorite “guilty pleasure,” though they might not feel any guilt over it. It might just be something they do to make themselves feel more interesting or more worthy of attention.

Talking about other people’s issues is so much easier than dealing with your own. But some folks take it a step further and are willing to ruin someone’s reputation just to feel more powerful.

3. They’re angry with you about something but not ready to talk to you about it.

This person could be a friend who’s angry with you because of something you’ve said or done (or not done). But for one of the following reasons, they won’t call you out to your face:

With that last one, they might just be used to feeling invalidated when they confront a friend or family member about something hurtful they said or did. Or maybe they tried to bring it up in a roundabout way but felt dismissed or blown off.

4. They don’t like you and are happy to join in when people are badmouthing you.

Not everyone will like you, no matter how easy you are to like. Some folks will see things in you that they don’t like, and it often has more to do with what they see in themselves.

Still, they may not be self-aware enough to recognize that. So, if they have juicy info to share about you — preferably something that makes you look less likable — they’ll share it whenever they get the chance.

Call it pettiness or vindictiveness. The upshot is they’re happy to punish you for the way they feel about themselves when you’re around.

15 Of The Best Ways To Shut Down A Narcissist

5. They feel compelled to vent about something you’ve said or done.

“I mean, who does that?” If you’ve ever overheard those words when approaching a group of friends, you probably know why they say it.

We all need to vent sometimes. And sometimes that venting will be about someone in your life, whether they’re a friend, family member, or someone you barely know. It could be an exceptionally rude or demanding customer. Or it could be a close relative or friend.

If you find out someone you consider a trusted friend is talking about you behind your back, and what they said sounds a lot like venting, it’s probably time for a heart-to-heart.

6. They feel personally attacked by something you’ve said or done.

Say you put a political sign on your front yard and then, some days later, heard that a neighbor (who’s voting for someone else) took issue with it and started spreading a scandalous rumor to turn the neighborhood against you.

Righteous anger loves an audience. And some folks, if they don’t have anything against you other than your political differences, will make things up to shock people.

Here again, pettiness or vindictiveness comes into play. They feel attacked, so they attack you with everything they’ve got (and then some).

7. They feel insecure or jealous around you and don’t mind taking you down a peg.

Maybe you’re making things happen for yourself, and they compare their accomplishments to yours. Or perhaps they see others complimenting you on one thing or another, and they’re painfully aware that they don’t receive the same compliments.

Whatever the reason, they feel as though you cast too big a shadow when you’re around, making it harder for them to shine.

So, given a chance to make you less admirable or impressive, they’ll take it.

8. They’re unwilling to look inside themselves and deal with their own issues.

For many gossips, talking about others takes the pressure off them to deal with their issues. It gives them someone else to focus on.

Introspection, on the other hand, is like quicksand to them. It forces them to confront their problems or examine their self-talk, which can be painful. They avoid it as much as possible.

Directing a spotlight in your direction instead gives them a welcome reprieve.

9. They feel a need to fill an uncomfortable silence with something.

When they’re talking to others, they feel exposed when the talking stops. The silence feels too much like a microscope. So, they’re happy to join in if someone has juicy gossip to share. And they’ll even contribute if they’ve got something interesting to add.

Bonus points if they can shock people or get them laughing, as long as their audience isn’t laughing at them. If they can build a reputation for being a reliable source of juicy gossip (doesn’t have to be true as long as it’s newsworthy), so much the better.

10. They’ve been the victim of gossip and are trying to divert attention to you.

Think Love, Simon. Maybe this person feels humiliated and lashes out against you with gossip, so people will stop talking about them. Again, it’s a diversion tactic. But in this case, it’s a bit more desperate.

They feel an overpowering need to draw attention away from themselves. If they know something about you that can help them do that, they’ll use it.

Or maybe they’re just so tired of being the butt of other people’s jokes, they’re ready to seize on the opportunity to pass the torch.

11. They’re struggling with their identity and projecting their own issues on you.

You’re probably not the only person they project their perceived flaws onto. We all, to some degree, see in others what we dislike about ourselves.

And sometimes, people who resist self-awareness as if fleeing from an enemy will project their issues onto you to make you look bad. Some will do this more than others, and if they have an attentive audience, they’ll amp it up.

It might be the only way they get the kind of attention they want, especially if they feel that most people (or the people they want to impress) like you better.

How Do You Deal with People Who Talk Behind Your Back?

What can you do when people talk behind your back? As you’ve probably guessed, it depends on why they’re doing it.

Think about that before considering the following options:

When in doubt, see if you can talk to the person who’s badmouthing you to get to the reason behind it. Whether they acknowledge their mistake or dismiss your concern, you’ll have a better idea of what to do next.

Is someone talking behind your back?

Now you have a better understanding of why people are talking about you behind your back, what steps will you take to deal with it?

Or is this something best answered with silence and a subtle but effective “door slam”?

If you know the reason behind the gossip, you can choose the best way to respond to it. And that might mean talking to your loose-lipped friend about what they said.

Whatever you do, remember to consider both the short-term and long-term consequences. What results are you going for? And what will it take to get them?