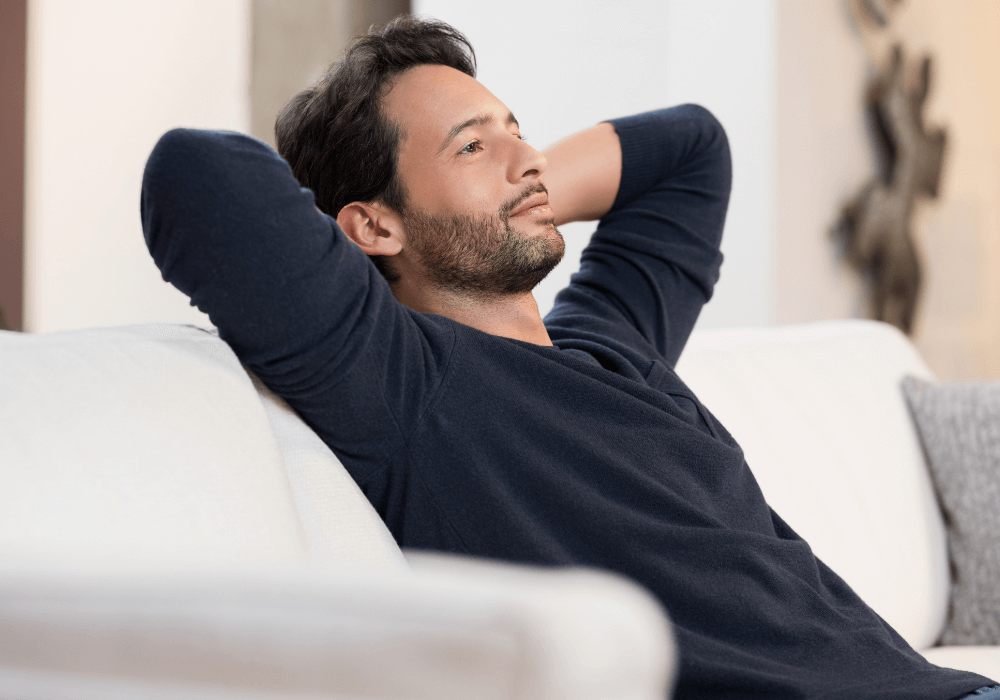 After all, you’re thinking about him all the time.

You see him everywhere you go.

And when the image of his smile comes to mind, you barely avoid crashing into things.

And you’re wondering, “Does he think about me, too? Does the thought of me have the same effect on him?”

You recognize the signs you’re picking up in yourself.

So, what signs should you look for in him?

How Do You Know If A Man Is Thinking About You?

The more he goes out of his way to be part of your life, the more interested he’s likely to be. It’s not a slam dunk since he may have other reasons for showing interest and putting in the extra effort.

But if he doesn’t go to the same lengths for anyone else, there’s a good chance there’s something there.

And the signs described below should clear up any doubts you might have.

We’ve collected 17 signs he thinks about you all the time. Read through them carefully and make a note of the ones that stand out for you.

1. He frequently reaches out to you.

Maybe he calls or texts you often to check on you — or to share jokes or news he thinks you’ll find interesting.  He seems to enjoy interacting with you, and he makes time for it as often as he can, if not every day.

If he has exciting news to share, you’re one of the first to hear about it.

2. You have your own inside jokes.

Maybe he teased you about something, and he suspects the slightest reference to it will make you smile. And he’s right. Or perhaps he shared a joke or a piece of news that had you both laughing, even when no one else understood why. No one else has to.

And the hugs are the kind you want to melt into. He wraps his arms around you, and you feel completely at home, comforted, and loved.

So, when he comes around, you look forward to that hug. You draw strength from it. One hug from him, and you’re ready for anything.

He tends to perk up when he sees you, even when he’s had a rough day.

You show up, and suddenly the weight on his shoulders feels lighter. And it shows in his face — even when he’s tired or distracted.

He’s never too tired to greet you warmly. And he might even tell you he’s glad you’re there.

5. He frequently mentions how something reminded him of you.

It seems lots of things remind him of you, too — not that you mind.

And he can enjoy seeing your reaction when he gives it to you. He also seems particularly pleased when you do the same for him.

6. He’s not distracted by his phone when he’s with you.

Maybe he doesn’t get to see you as often as you’d both like, so he makes it a priority to be fully present when he’s with you.

If you spend a lot of time together, you might see him checking his phone more often — not because he’s bored but because he feels comfortable doing his usual daily activities around you.

Ask him for his full attention, though, and you’ve got it.

He follows you on your favorite platforms and makes a point of liking and even sharing your content.

If he sees something he likes in his own feed– and if he thinks you might like it– he’ll tag you on it to make sure you see it.

He wants you to know he’s thinking of you.

He never gets bored of learning more about you — your past, your beliefs, your ideas, and generally whatever you consider important enough to share.

If others are talking about you, he’s listening —  ready to defend you if he hears a slight spoken about you.

And when he shares something about himself with you, he’ll hope you show the same level of interest.

9. He remembers little things about you.

He remembers things you’ve said, things that lit up your face, things that made you laugh or turn serious, and a slew of other random details most people miss.

And when a new observation of his connects with what he’s noticed, he does or says something thoughtful — something you might expect from someone who’s known you longer or who actually lives with you.

And the memory of that thoughtful act stays with you.

10. He talks about you (a lot) to his friends and family.

And it’s all good stuff. Your name comes up whenever something reminds him of you.

And if he’s proud of something you’ve accomplished, expect him to brag about it when he gets the chance. He’s not shy about letting you know he’s impressed with you, either. And knowing you’ve impressed him always makes your day.

11. He introduces you to friends and family.

Given the opportunity, he doesn’t hesitate to introduce you to other important people in his world — from his family to his close friends to his coworkers and acquaintances.

Not only is he not embarrassed to be seen with you, but he’s also only too happy to let people know you’re one of his favorite people (if not his #1 — yet). And you’re happy to meet other people who see in him all the things you’ve come to admire.

12. He’s curious about the way you think.

Your perspective and even your opinions matter to him. He’ll mention something and seem genuinely interested in your reaction — and any thoughts you might share. And the interest is mutual.

Of everyone in the room, he’s the most interesting to talk to. You love the way his mind works, and he seems intrigued by yours, too. One topic leads to another, which leads to another. And while the time passes quickly, neither of you seem to notice.

Even if you don’t think a joke is particularly funny, he finds something entertaining in it — if not the joke itself, then maybe your delivery of it or the expression on your face. He thinks you’re funny, even if not all your jokes are.

You get each other’s sense of humor, even if no one else does. And the sound of his laugh more than makes up for any negative reactions you’ve gotten from anyone else.

He doesn’t shy away from saying what he thinks, and often he expresses them in a way that cracks you up. And if you’re laughing, so is he.

Put you two in the same room, and he’ll share stories and jokes that soon have you cracking up and forgetting whatever was annoying you before. And he seems to notice and enjoy that you’re laughing — and not just because you’re one of the many who are.

If he spells it out for you, saying you’ve been on his mind (a lot), it’s hard to miss. Even better if he backs up his words with nonverbal signs.

If you’re asking yourself, “What does it mean when a guy says he thinks about you?” you might be scouring your memory for signs that you do, in fact, matter to him. Or maybe you’re just having a hard time believing that you could.

16. He shares personal information with you.

He doesn’t mind sharing personal information with you because he trusts you to be discreet and to keep those details between you. He may not tell you everything, but if you ask what he’s up to, he’s happy to tell you.

And he’s the first to volunteer an embarrassing memory if sharing it might help you feel better about a mortifying experience of our own.

He’ll do things out of the blue to surprise you and brighten your day. Ask him for something small, and he’ll go the extra mile — all to show how ready he is to do anything for you because it’s you.

And when you go out of your way for him, he notices and enjoys it.

If the answer to your question, “Does he think of me?” is “Yes,” which of the signs described above stand out for you?