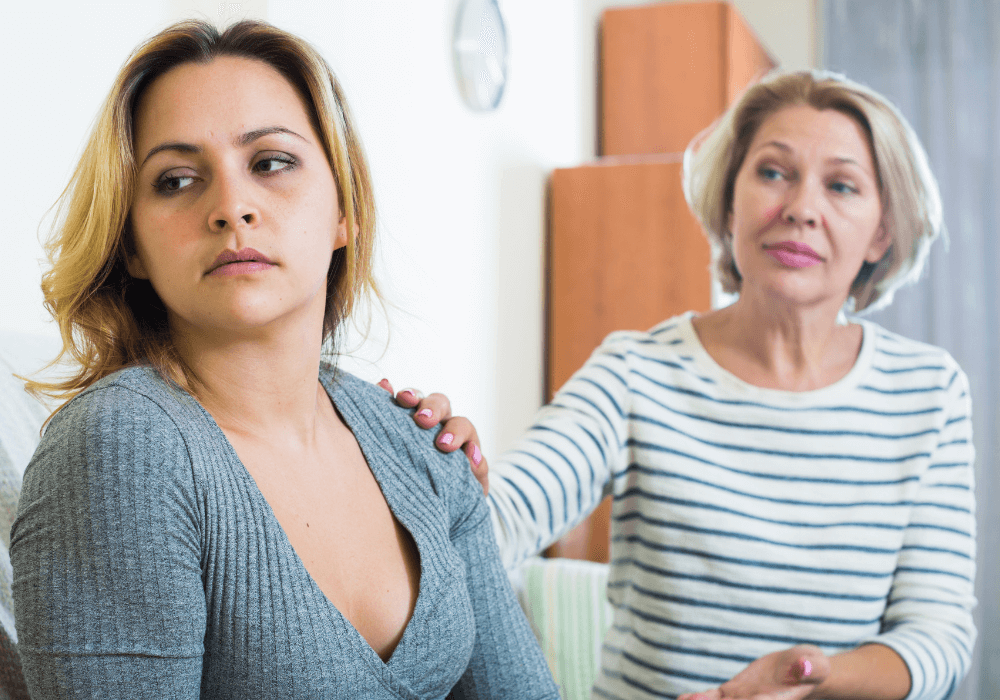 You had high hopes when your son got married.

You were pleased to see him enter a new stage of life.

Perhaps you have already been blessed with grandchildren, or you’re still waiting.

All is not bliss, however.

Your daughter-in-law has become a source of conflict by creating barriers between you and your son and grandchildren.

Daughter-in-law problems can be quite challenging and painful.

The stakes are high because relationships with your son and grandchildren are clearly in jeopardy.

Why Is My Daughter-In-Law So Controlling?

A daughter-in-law may feel in competition with her mother-in-law for the love and adoration of her husband.

She may believe that she has to assert her place in the family to defend her perceived position as her husband’s most important family member.

However, accomplishing this in the face of the mother-son bond can place intense pressure on a daughter-in-law.

The situation can result in a difficult or controlling daughter-in-law.

Licensed clinical psychotherapist Deanna Brann, Ph.D., author of Reluctantly Related—Secrets to Getting Along With Your Mother-In-Law or Daughter-In-Law, writes that a woman may try to sabotage her husband’s or children’s view of her mother-in-law with belittling and critical comments.

She wants to lower the status of the mother-in-law in an attempt to elevate her own.

Her efforts may reach the level of bullying her mother-in-law and excluding her from family life as much as possible.

Dr. Brann’s research has revealed that difficult daughters-in-law bully their mothers-in-law because of low self-esteem and a sense of insecurity. A desire to feel important and, therefore, powerful is likely to motivate her behavior.

What Do You Do When Your Daughter-In-Law Doesn’t Like You?

A strong emotional response is natural when you have a disrespectful daughter-in-law in your life. But responding with knee-jerk reactions won’t help.

For the sake of your relationship with your son and grandchildren, give yourself a chance to calm down. Once you stop seeing ready, you can prepare a rational response that could improve the situation.

Here are some tips for improving your relationship with your daughter-in-law:

Why Is My Daughter-In-Law So Disengaged and Distant?

She might be disengaged and distant because she doesn’t like you, but that isn’t usually the reason.

Your daughter-in-law can feel intimidated and nervous around you, especially if she is young. It isn’t because you’ve done anything wrong but that she doesn’t want to make a misstep.

If the couple is newly married, your DIL may be trying to figure out her place in the family, and the best way for her to do that is to be reserved. With time, she’ll likely open up and engage with your more. Give her time and try to make her feel comfortable.

How Do I Know If My Daughter-In-Law is Toxic?

We hope you don’t find this to be the case, but if you’re wondering — she may very well be toxic. Look for these behaviors and if she has them consistently:

How To Deal With a Controlling Daughter-In-Law: 9 Actions To Consider

Wondering how to deal with a difficult daughter-in-law? You have some options. A kind heart and some gentle strategy could go a long way.

1. Reflect on How You Treat Her

Have you given much consideration to how you treat her? You may not have noticed that you’re still acting like the primary female in your son’s life. Guess what? He got married, and it’s no longer about you.

Think back and look for instances when you may have dismissed her opinion or made her feel insignificant in some way. It’s each to slip into such behaviors because you have some feelings of jealousy toward her as well.

Your son is now her husband, and you are not used to the competition for his love and attention. If you detect some unflattering behavior on your part, resolve to show her more kindness and respect in the future.

2. Invite Her to Spend Some Quality Time With You

Her cool attitude might be rooted in feeling excluded. She may even be shy and uncertain about how to initiate a relationship with you. Feelings of stress and even dread in regards to a mother-in-law are not uncommon.

Building a relationship relies on actually nurturing one. Think back and ask yourself what your interactions with her have been like?

Was she simply treated as a conduit to reaching your son or grandchildren? Did you engage with her as a person worth knowing in any meaningful way?

An invitation to do something fun with you that does not involve your son or grandchildren could begin to heal past mistakes.

Although you may not criticize her to her face, you may be voicing unpleasant comments about her to your son, your husband, or anyone who will listen.

You should extract yourself from this negative quagmire. You’re training your brain only to see her in a bad light.

4. Ask Her What Her Concerns Are About You

If possible, attempt to have a calm conversation with her about what is bothering her about you. Preventing this from becoming an argument is very important. Introduce your concerns gently.

For example, you could say, “Is there a reason you don’t want me to take my grandson to the zoo?” This question allows her to tell you her feelings about that. A chance to discuss things instead of just tiptoe around each other could lead to more trust.

5. Don’t Compare Her to Your Other Daughters or Daughters-in-Law

If you have other daughters or daughters-in-law, you probably compare her to them. This behavior will make her defensive.

She likely can see the positive relationship that you have with the other women. This awareness can cause her to feel insecure and uncertain about how to act around you.

She may resent feeling like she has to compete for your favor and react by pushing you away.

15 Must-Know Signs Of A Controlling Woman

How To Deal With A Controlling Person

6. Learn to Recognize Her Manipulative Tactics

Misunderstandings and mistakes on your part are not always the source of the problem with a daughter-in-law. She may have her own agenda and try to manipulate you to get her way.

Dealing with a manipulative daughter-in-law calls for controlling your temper and not taking the bait when she tries to blame you.

She may employ passive-aggressive behavior to dodge her responsibility for the relationship problem. When you ask her to do something, she may procrastinate or act sullen.

Complaints about being unappreciated or cheated are common. When she expresses hostility, she will do it indirectly and cast herself as the victim.

So, how do you deal with a passive-aggressive daughter-in-law? You should start by paying close attention to her behavior so that you can learn her tactics. Your strongest card to play in the passive-aggressive game is to refuse to apologize when you are not wrong.

Calmly explain to her that you can see that she is trying to avoid accountability by casting you as the bad guy. Ask her if she thinks that she is being fair to you. If she tries to trap you into agreeing with her, say that you will take some time to think about her perspective.

As you gradually cease yielding to her manipulations, she may learn to act more reasonably.

All parents tend to share advice and wisdom that their adult children mostly tune out. If your daughter-in-law hasn’t asked for your advice, don’t offer it.

Even when you’re well-meaning, your daughter-in-law will interpret your advice as a message that she isn’t good enough in your eyes. Unsolicited advice places more strain on an already strained relationship.

Although you may disagree with her, you should keep your focus on creating harmony so that you can maintain a good relationship with your son and grandchildren.

8. Find a Way to Live With Her Boundaries

Everyone needs boundaries. What you see as limited access to your grandchildren may be her desire to spend more quality time with her children. She may not want to over-schedule her children if they are already busy with activities.

Perhaps she doesn’t agree with your parenting style or other views on life which motivates her to limit your influence on her children. You won’t like any of these harsh truths, but you should consider learning to live with them.

You may succeed more by respecting her boundaries. When she sees you as less intrusive, she may become more responsive to your desire to participate in her family life.

9. Keep Making Friendly Contact and Hope That She Warms Up

You and your son’s wife often find yourselves thrust into intimate family relationships without the benefit of many years together. You may feel like strangers and may be very different people.

Even when you feel you’re making no progress in the relationship, keep the door open.

Over time, your persistence may wake her up to the reality that you deserve to have a part in your grandchildren’s and son’s lives.

Your fear of losing close ties with your son and grandchildren can provoke your temper. By recognizing your vulnerability, you can develop the patience to tread gently as you nurture a relationship with a woman who feels threatened by you.

Make an effort to compliment her when you can. Encourage her as she likely struggles with the frustrations of marriage and motherhood. The time may come when she sees your value or perhaps even wants you to advise and help her.