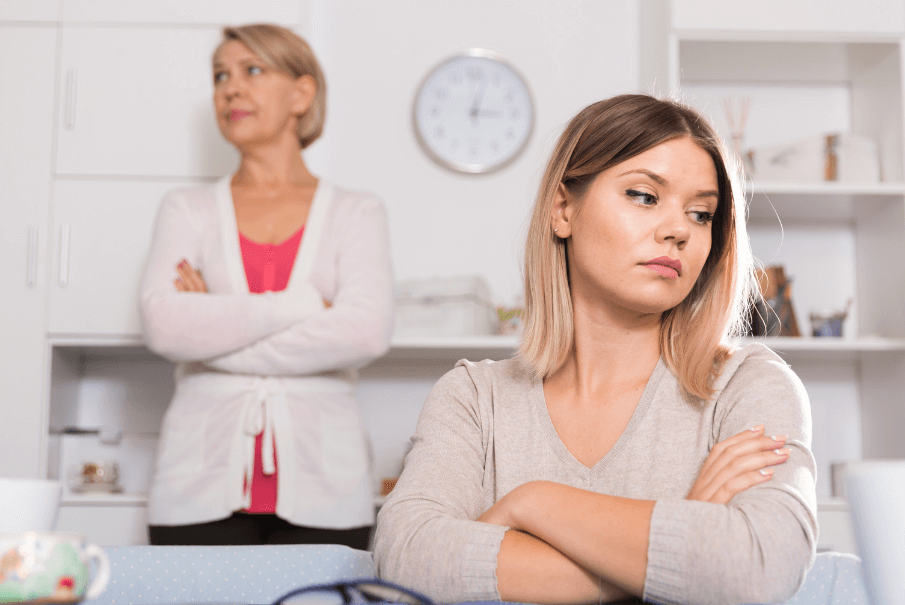 If you grew up with controlling parents, you know how exhausting it can be.

Nothing you do is good enough. Every decision you make on your own is flawed.

And, oh… you’re not really eating that are you?

You’ve made it this far, though. And you know life can be good, in spite of your micromanaging or manipulative parents.

But it wouldn’t hurt to get some tips on how to behave toward them in a way that helps you accept them as they are, accept yourself, and love your life.

Before we dive into those tips, let’s review the signs of controlling behavior.

You’ve lived with these signs for years, so you’ll likely recognize them – and some more than others.

1. They make you feel you can’t do anything right without their help.

Controlling parents are constantly sowing the seeds of self-doubt.

They want you to doubt yourself so you’ll continue to depend on them for help and guidance.

So, if you pull away and insist on making your own decisions (without their help), they feel threatened.

If you do make a decision without them, they’re likely to criticize it — even if it goes well for you.

They’ll find fault in something you did to make you doubt yourself.

And if your decision doesn’t turn out the way you hoped, they’re quick to capitalize on that and remind you of how much better things would be if you’d only listened to them.

Parents like these are quick to make decisions for you.

They don’t bother consulting you, because they firmly believe they’re doing what’s best for you.

A favorite phrase of theirs: “You’ll thank me.”

2. Nothing is ever good enough for them.

Perfectionist parents expect you to be grateful for their commitment to excellence.

What they don’t see is the effect of their unrealistic expectations.

They don’t see how miserable it makes you — or what it does to them.

To them, perfection is attainable. It just takes hard work and uncompromising attention to detail.

And if you won’t make sure everything in your life is just so, they feel justified in butting in to make corrections.

In other words, if you can’t do something right (according to them), they’ll do it themselves, whether you want them to or not.

And if you fall short of their expectations and refuse to let them fix you, they’ll find ways to punish you for your “ingratitude.”.

3. They scold or belittle you in public.

Controlling and manipulative parents see nothing wrong with openly criticizing you in front of other people.

They won’t hesitate to make disparaging comments about your weight, your lack of a job, or something else they consider fair game.

In their minds, they’re just motivating you to improve yourself.

Or they’re reminding you of how much you need them to become someone worth dating, marrying, or hiring.

Some are quick to make assumptions about your intentions and to vocalize those assumptions in public. And some of them get loud.

But if you call them out on it, you’re the one being disrespectful.

4. They use threats to manipulate you.

Manipulators will often use threats to coerce you into doing what they want.

They’ll use emotional blackmail to get what they want — especially if they’ve found it effective in the past.

They might threaten to put themselves in danger if you don’t cancel your plans and rush home to them.

And if anything happens to them, it’ll be your fault.

Some will even go as far as to threaten your children with separation from you if you refuse to do what they want. Because, after all, they know best.

The goal is to make the cost of disobeying them too heavy for you to bear.

5. They’re rude to your spouse/partner/best friend.

If they don’t respect you, they’re unlikely to respect your choice of partner or your best friend.

In fact, they’re more likely to see these new additions as a threat.

Those close bonds with people other than they can only weaken their control over you — especially if your spouse/partner or best friend encourages you to stand up to them and live your own life.

Controlling parents might try to force new, pre-approved friends or partners on you, criticizing you if you seem less than thrilled by their attempt at match-making.

As for the people you choose, your parents are more likely to see them as corrupting influences and to treat them as such.

Or if they behave civilly toward your spouse/partner or best friend, they consider themselves saints for having held their tongues.

How To Deal with Controlling Parents

1. Let go of your need to please them.

You might think you’ve already done this. But you’re not alone if you still want your parents to look at you and express pride in the person you’ve become.

You want your accomplishments to be worth something to your parents. Because you’re human.

This becomes a problem, though, when you find it impossible to be proud of your own accomplishments unless they are.

Don’t let anyone else — not even your parents — decide for you whether you or your accomplishments are good enough to be proud of.

Ultimately, how you see yourself matters more than how anyone else sees you.

Because that is what will drive you to your next thoughts and actions.

That is what will determine your impact on the world.

2. Accept your parents as they are

Or, in other words, stop trying to change them.

It won’t work, anyway. You can’t make them the perfect parents any more than they can make you their idea of the perfect son or daughter.

And the more you fight them and try to make them more supportive and less controlling or manipulative, the harder it is to enjoy the good in your life.

Because as long as your parents aren’t the parents you want them to be, you’ll continue to blame them (at least in part) for your own unhappiness.

Don’t let your happiness depend on them or on how they see you. You get to decide what you focus on because you’re the one responsible for the consequences.

And the sooner you accept them and yourself, the happier you’ll be.

Do this for your own mental health and for the good of all your relationships.

You just want your time together to be filled with smiles, laughter, and warmth. But they never are — or not for long.

Sometimes, you have to set boundaries even between you and the people you love most.

Let your parents know you love them but you won’t allow them to control or manipulate you in any way.

And if they keep trying to do so, they’ll find it much harder to get a hold of you.

Once you’ve put the boundary in place, it’s up to you to keep it there.

4. Learn how to act independently of your emotions.

Keep calm and lay out the facts.

Do this even when your parents are anything but calm. In fact, that’s when it’s especially important to keep your cool.

The calmer you are, the more power you have. Hold onto that.

If you let yourself slip a bit, take a moment to restore calm before you say anything more.

Walk away, if you have to (and if you can). That way, you’re less likely to say something you’ll regret.

The more you can act outside your emotions and remain calm, the stronger you’ll become.

And while there’s no guarantee your parents will recognize that strength for what it is, they’ll at least sense that their control over you is slipping.

It’s too easy to get lost in the struggle when you’re dealing with controlling or manipulative parents and to lose sight of how your experiences have shaped you.

You deserve so much better than to be the sand under someone else’s boot.

You are no one’s doormat and no one’s mistake. You will never be “too damaged” to love.

You’ve been through something not everyone can understand. And you’ve fought battles they’ve never faced.

Give yourself some credit. It’s not easy growing up with controlling parents, and you’re not the only one who knows this.

Be the kind of person who encourages those going through the same thing. And don’t forget to save some of that encouragement for yourself.

18 Ideas For Dealing With Difficult Family and Friends

38 Unhealthy Signs Of A Dysfunctional Family

Do you have controlling parents?

Which tips did you find most useful — either as a new tactic or as a helpful reminder?

You know your parents better than I do, so you probably have some idea of how they’ll respond to you if you set clear boundaries.

Maybe they’ll respect them, or maybe they won’t.

But as long as you keep those boundaries in place and keep calm (or as calm as possible). your parents will find it difficult, if not impossible, to control or manipulate you.

They’ll keep hitting walls. And yes, they’ll probably express their frustration in a variety of ways (including passive-aggressive tactics like the “silent treatment”).

Keep loving them. But don’t forget to show love to yourself and to the people who are there for you.

And may your compassion and courage influence everything you do today.