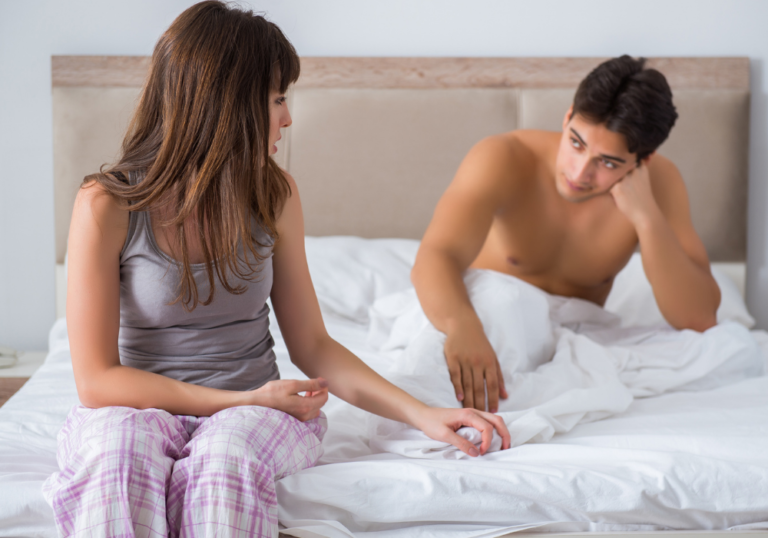 Sometimes, a one-night stand is precisely what the doctor ordered.

Other times, though, you fall for a guy after being intimate — and he disappears into the wind.

You thought it was a great night, but he bolted, and you haven’t heard from him since.

So now you’re wondering: Why do guys act weird after hooking up?

To help you make sense of the situation, today, we’re exploring possible reasons why he is distant after intimacy.

What Type of Guy Withdraws After Intimacy?

There are many reasons why guys need space after intimacy, and they run the gamut.

Sometimes, they have a good (or at least understandable) reason for fleeing the coup immediately after sex. Other times, there isn’t.

Typically, bolters fall into one of five categories:

Why Do Guys Distance Themselves After Intimacy? 19 Possible Reasons

It would be nice if every sexual encounter were swaddled in sensitivity and respect — but reality can be a lot more gruesome. Into most women’s lives, a little hook-up drama must fall.

And in many cases, it involves a guy who suddenly distances himself after intimacy.

If it’s happened to you, you’re probably wondering, “WHY!?”

Regardless, it still stings. So to help you make sense of the situation, today we’re unpacking 19 reasons he may distance himself after sex.

1. He Got What He Wanted

One of the main reasons why men withdraw after intimacy is that they get what they want: sex. Some guys are on a mission to rack up “notches” on their proverbial belt.

Don’t beat yourself up if one of these types fools your pants off. They’re usually incredibly smooth and can charm the habit off a nun.

He may be married or in a serious relationship. After cheating, the guilt may be overwhelming, so he’ll clam up and turn off the intimacy switch.

Look, everyone isn’t sexually compatible. It doesn’t mean there’s something wrong with you — or him. But understand that if a guy didn’t enjoy sleeping with you, he probably wouldn’t be up for seeing where things go. As a result, you likely won’t hear much from him moving forward.

Guys are just as capable of being shy or embarrassed as anyone else. If he feels like he didn’t perform well, he may act aloof after sex. He may even leave in a whirlwind of awkwardness.

If shyness or embarrassment are the reasons he bolts, he’ll likely reach out within a couple of days. So hang tight.

5. He Genuinely Had Someplace To Go

Although it may feel suspicious at the time, sometimes, emergencies arise. Or maybe he had scheduled commitments, and your interlude was a spur-of-the-moment event.

If this is the case, he’ll reach out sooner rather than later if he’s interested.

If a guy grows distant after intimacy, he could be insecure. Did you sleep together at your place? If he’s someone who needs his stuff around, he may leave quickly. Mr. Insecure will likely get in touch within 72 hours.

9 Reasons Why Your Boyfriend Lost Interest In You Sexually

Sex addiction is a real thing, and people who suffer from it aren’t the most sensitive after being intimate. For them, it’s a physical impulse, and emotions play very little — if any — role.

There’s a difference between a player and a sex addict. The latter is physically dependent on coital interactions; the former has no impulse control because he’s self-centered and enjoying his “wild oats sowing” stage.

Eventually, players usually settle down and do the whole two kids and a dog thing. However, they’re also the most likely to step outside of their marriages. So the smart move is to avoid them at all costs.

9. He’s Confused By His Feelings

Maybe he likes you a lot but has other big things currently demanding priority in his life. He wants to start something but doesn’t know if it’s the right time. This internal push and pull can come across as detachment.

Men can fall hard when it comes to love. If the guy you’re seeing is getting over a relationship, he may be overly cautious, especially if he’s developing feelings for you.

11. He’s Got Intimacy and Commitment Issues

12. He Doesn’t Want To Be Pressured

Be honest: Are you being clingy with him? If so, it’s likely turning him off. Nobody likes to be pressured — about anything! Constantly nagging a guy about your status, especially right after sex, is irritating.

If you’re in the market for a serious relationship and a guy won’t commit to you, move on! He’s not for you. And who knows, the second you move on, he may come crawling back, apologies in hand.

13. He’s In Love With Someone Else

He may not be dating or married to someone else, but he may be in love with another person. In these situations, there’s not much you can do. If the guy you’re seeing is still carrying a flame for another, you can either wait it out or move on.

However, don’t convince yourself that you can change him or win him over. If he’s still pining away for someone else, there’s precious little you can do to turn things in your favor.

It doesn’t mean he doesn’t care about you at all, but if you’re in the market for love, you may be fighting an uphill battle.

Is he navigating a religious or ethical transformation? Or maybe he genuinely doesn’t believe in sex before marriage but allowed lust to get the better of him. Now, he’s grappling with his decisions. If so, it may come across as detachment.

15. He Thinks You’re Too Needy

Most guys are allergic to needy and desperate women, so being too intense after sex may be a red flag to him.

But before you change yourself to please a man, remember that you never want to act like someone you’re not. So pretending to be “Ms. Cool Girl” when you’re actually “Ms. Loves to be in Love” won’t work out in the long run. People can sniff out phoniness. Besides, keeping up the charade is tough!

Always prioritize authenticity. You’ll eventually find a cover for your pot. Don’t change in a feeble attempt to win over some dude — and don’t chase after him, either.

16. He Doesn’t Want To Raise Your Hopes

Maybe he’s moving away soon. Or perhaps he knows he’s not interested in anything serious. So to avoid raising your hopes, he’s not the warmest after sex.

For women, sex triggers the release of oxytocin, which leads to deeper emotions. Men, however, release dopamine, which is all about physical pleasure. As a result, they tend to be exhausted after orgasming, which can come across as indifferent.

If a guy is using you for sex, he’s not concerned about your feelings, much less hurting them. If you find yourself with one of these creeps, try not to beat yourself up. It happens.

However, don’t let yourself fall for him, either! Do whatever you must to move on — and don’t greenlight his booty call attempts! He’s not worth it!

19. He Doesn’t Want To Get Serious

Maybe your guy isn’t a bad dude; he’s just not ready to get serious. If he tells you this ahead of time, and you choose to sleep with him anyway, you cannot get mad when he makes it clear that he doesn’t want a commitment.

7 Signs He Is Distant After Intimacy

So how can you tell if he shuts off after intimacy?

The signs are pretty obvious. Plus, you’ll just feel it intuitively.

Sex can be a lot of fun — but it can also introduce headaches and complications.

So before deciding to sleep with a guy, ask yourself a few questions. Make sure you can handle whatever may come — including never seeing him again.

Not every guy who’s a bit weird after intimacy is terrible. Who knows, you may end up with the guy you’re stressing about.

Nevertheless, beware of players, and for sanity’s sake, it’s wise to keep them at arm’s length — especially if you’re the type to catch feelings quickly.