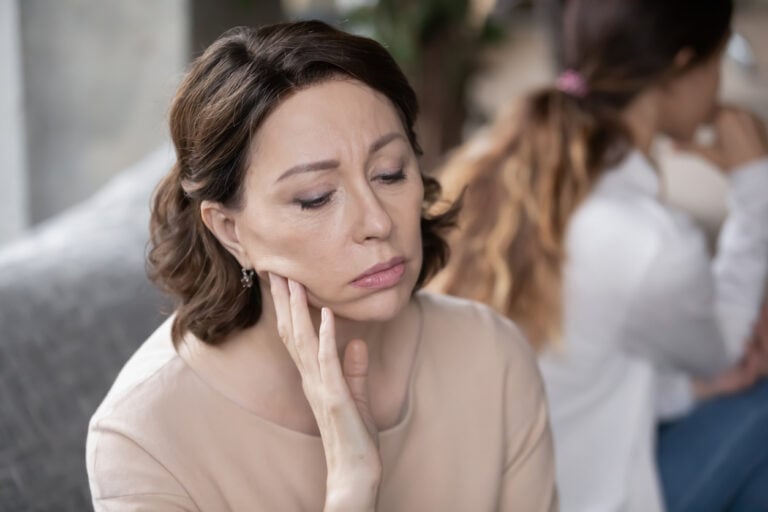 Having or adopting children doesn’t automatically make someone the ideal parent.

After all, adults have unresolved issues, too.

Some are narcissistic, some are lugging around past traumas, and others are emotionally underdeveloped.

When left unaddressed, the latter can be especially rough on kids and lead to mental health hurdles down the line.

So today, we’re unpacking the profile of emotionally immature parents and how to deal with them.

What Is an Emotionally Immature Parent?

Immaturity is the state of not being fully grown.

Adults who fall into the category don’t know how to control certain emotions and behave in ways that can be detrimental to their children.

The human brain keeps developing into our late 20s, at which point most people start making better decisions and become more comfortable addressing and acknowledging their faults.

However, if a parent never resolves traumas or issues from their childhood, they may remain stuck in a state of arrested development.

How do emotionally immature parents get that way?

There are lots of reasons.

But there are some general categories into which many folks fall.

How Does It Feel To Have a Relationship With an Emotionally Immature Parent?

Dealing with an emotionally immature parent varies depending on their personality type, which we’ll explore more below.

Generally speaking, though, they’re typically inept at handling conflicts effectively, and they tend to be self-centered. They may also be quick to judge others but blind to their faults.

What Are the 4 Types of Emotionally Immature Parents?

While we’ve made great strides in psychological research and treatment, many things remain a mystery.

Moreover, since each person’s story and situation is unique, hundreds of individualized factors make up our personalities.

Some people with the condition may fit squarely into one category. Others may exhibit elements of two or more.

Emotional parents are controlled by their feelings and rely on external factors to guide their behavior. Typically, they’re unpredictable and swing like a pendulum.

One week they’re overly involved in your life; the next, they can’t be found. These types of guardians are frequently pathologically self-focused.

Driven parents can be the most frustrating because everyone else thinks they’re wonderful. They appear to be highly invested in their children and are front-and-center at every event. But behind the scenes, they’re controlling, lack empathy, and don’t have a genuine emotional connection with their kids.

Often, driven parents expect their kids to value the same things they do without question. If you object, they’ll ignore, reject, or punish you.

Passive parents are frequently seen as “cool parents.” They don’t provide much guidance nor place limits on their children. They’re pros at looking the other way. But many are emotionally inaccessible and cannot handle upsetting situations — which isn’t a plus when raising kids.

Rejecting parents are hurricanes of self-absorption. Everything revolves around them. Typically, they’re not particularly close to their children unless their kids are somehow useful to them in a given situation.

Rejecting parents aren’t engaged in their children’s lives in meaningful ways, and they tend to be commanding, isolating, and, quite frankly, obnoxious.

What are emotional immaturity symptoms or signs? The condition can manifest in many ways depending on the circumstances.

Below, we’ve curated a list of common tell-tale signs you’re dealing with an emotionally juvenile mother or father.

Is your parent a “my way or the highway” kind of person? Do they grow defensive if someone suggests an alternative way of accomplishing or thinking about something?

Is it hard for them to comprehend when someone wants something different from them?

These are hallmarks of infantile parents, especially those in the “driven” category.

Many emotionally childish parents have a low-stress tolerance. They cannot handle when things go wrong and have difficulty admitting mistakes and faults.

Individuals who exhibit these behaviors disregard facts frequently and cling to stories they’ve devised in their minds. They also tend to blame others.

In addition to a low-stress tolerance, emotionally adolescent adults also have a low-conflict tolerance. They love to brush things under the proverbial rug instead of dealing with them head-on.

When you ask to clear the air about an issue, they resist and try to gaslight you for being too aggressive or needy. Moreover, they’re prone to choosing what feels best for them instead of prioritizing the greater good.

Emotionally immature parents can be frustratingly stubborn — they’re like two-year-olds who discover the word no! They don’t respect other people’s opinions and rarely admit when they’re wrong.

Even when the evidence is undeniable, they’ll twist things around in their heads to protect their large but fragile egos.

Along with being stubborn, emotionally underdeveloped folks can be extremely self-centered. They come first!

To complicate matters, they often see themselves as magnanimous and are utterly blind to their shortcomings.

Low emotional IQs and empathy levels are typical among emotionally inept people. For them, everything is black and white, and they have trouble relating to anything that hasn’t personally affected them.

They may give a lot of lip service when something bad happens, but it’s usually not heartfelt.

Emotionally ignorant people often refuse therapy and argue that it’s “junk science” that won’t help anything. But they’re really terrified of someone seeing the real them.

Does the problem person in your life place more emphasis on stuff rather than emotional well-being?

Are they more concerned that you “look the part” instead of concerning themselves with how you’re feeling and doing? Do they teach you that certain feelings are shameful or wrong?

This is very common among the emotionally inept. There’s nothing wrong with wanting things in life. Having goals is good. However, when material pursuits become the most important thing, you’ve got problems.

An exciting idea pops into your head. Or maybe you’ve got super news that you’re anxious to share. You tell your parents and are met with dismissive disinterest.

It’s heartbreaking but common among people who aren’t mature enough to be happy for other people — even their children.

57 Heartbreaking Toxic Parent Quotes To Overcome Your Painful Past

You make a small mistake, and it triggers your problem parent. To them, everything is a catastrophe. This type of behavior is another clear sign of emotional immaturity. Part of growing up is learning how to deal with things proportionally.

Sure, we all get angry sometimes. But having a super short fuse and losing one’s temper at the drop of a hat is something to be worked on, not ignored.

We all have egos. We need them to help us interpret the world and our place in it. But being led by your ego isn’t great. Part of growing up is learning how to keep it under control.

If nobody mastered the skill, we’d all be stomping around in a snit, and nothing would get done. We’d be a species of emotional toddlers!

Emotionally immature parents often have unchecked egos. Some act like divas because of it, and others behave like doormats.

Projection is the process of grafting one’s feelings and insecurities onto someone else to escape accountability. For example, let’s say you’re a jealous person but understand it’s not socially acceptable to be hyper envious.

Instead of working to become less jealous, you go around and accuse other people of being such, even when they’re not.

It’s a defense mechanism, and people who do it are usually unaware of their tendency to project, which is toxic and can ruin relationships.

When parents don’t validate your feelings, it has the power to make you feel ignored and misunderstood. Growing up is tough enough.

So when a parent throws in extra hurdles, life can feel impossible. But if you’re stuck in this situation, try to remember that they’re the problem, not you!

Some guardians with emotional immaturity issues also struggle with substance abuse, which presents a chicken-and-egg conundrum.

Do they act childish because they’re using, or do they use because they’re childish? Whichever the case, telling a responsible adult about your situation is wise. They may be able to get you help.

How Do You Deal with an Emotionally Immature Parent?

You’ve determined your parent or guardian is emotionally immature. Now what?

It may be impossible to escape your household if you’re still a minor. So learning a few survival tactics is helpful.

Detach From Your Ego

Your ego will instinctively want to battle your problem parent’s ego. Learning how to detach from yours can be a lifesaver. Try yoga, mindfulness, deep-breathing exercises, and meditation.

Don’t be discouraged if it doesn’t work right away. Keep plugging away at it, and before long, you’ll start to experience the benefits.

Living with an emotionally immature parent is draining, and getting through it requires self-compassion.

Without it, you could find yourself onboarding their baggage — and you don’t need to carry around their problems. Moreover, it’s important to honor your own emotional experiences.

If possible, try to take advantage of therapy opportunities at school. If you’re older, consider seeing a counselor or coach who can help you cultivate healthy self-esteem and a sense of self.

After grieving the loss of having a well-adjusted parent, learning about their condition is a good idea. It’s easier to withstand when we wrap our heads around a behavioral disorder.

Plenty of information is available on this website and other places online. You may also want to pick up some books for a deep dive.

It’s rarely wise to hold things in. Sure, some things are better left for another time, but holding everything in breeds stress — and stress is terrible for your health.

So when dealing with an emotionally immature parent, say what you must to get it off your chest. However, don’t expect them to respond productively. The bonus is that managing your expectations is a great life skill.

Do your best to build an emotional support system since you cannot rely on your problem parent. Hopefully, you have another guardian who understands their partner’s shortcomings and can help.

If not, turn to a friend, teacher, guidance counselor, other relatives, or even a doctor.

Recovering from emotionally immature parents can be life-changing — whether you’re 14 or 84. It’s like taking a hundred-pound weight off your body. The insight you’ll gain will also open previously untapped avenues of compassion and relaxation. It may sound strange, but you’ll like yourself better!

So what does recovery entail?

Dealing with an emotionally immature parent is tough. But if you’re clear-eyed about the situation and have a few coping tools, it’s a much easier road to navigate. Good luck!