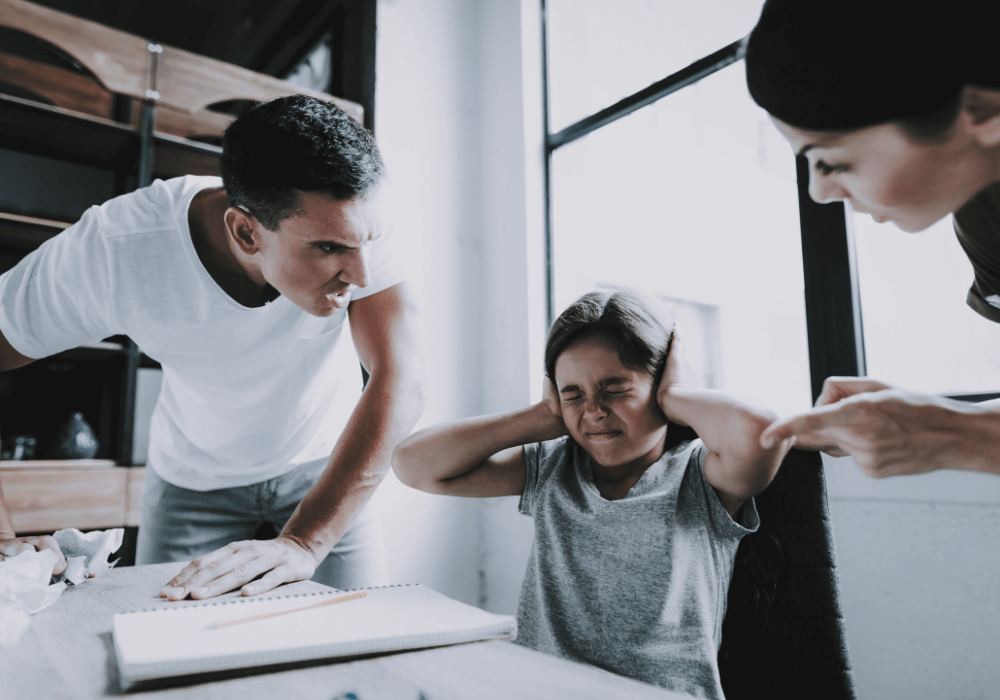 It can be hard enough to admit to yourself, “My parents are toxic.”

And you might wonder if, without that chunk of your identity, there isn’t much left of you to know.

You didn’t get the chance to see who you might have become without your parents’ damaging influence.

So, it’s understandable you might think there’s nothing behind the damage worth knowing.

How Toxic Parents Ruin Your Life

It’s no surprise growing up with toxic parents can make your life monumentally harder than it should be. Here are just a few reasons for that:

It can take years, decades, or a lifetime to process and heal from the effects of toxic parenting. Until then, relationships of any kind feel tenuous at best. It’s harder to believe anyone will see your buried self as someone worth the extra effort of knowing.

Because your parents did not, and hiding is a hard habit to break.

Read through the following quotes about toxic parents and make a note of the ones that stand out for you.

You might use the quotes that resonate with your situation as a journaling prompt to help you work through the pain of the past.

1. “Dysfunctional parents do not apologise. It is one feature that the children of narcissists would instantly agree on. They will lie and justify themselves, but never accept they did anything wrong.” ― Diana Macey

2. “Getting angry when something about their behaviour is challenged in the nicest way, is a typical reaction of a narcissistic parent.” ― Diana Macey

3. “Narcissist parents don’t care about their children’s feelings at all. Only their feelings matter.” — Kim Saeed

5. “Leave your pride, ego, and narcissism somewhere else. Reactions from those parts of you will reinforce your children’s most primitive fears.” — Henry Cloud

6. “People tend to raise the child inside of them rather than the child in front of them.” –Joe Newman

7. “In the Narcissistic parent’s eyes, they do no wrong nor do they feel they should be held accountable for the bad and wrong things that they have done.” — Katherine Childress

8. “Family is where you’re meant to be most free, don’t let blood chain you down.” – Michelle Meleen

10. “I was worthy of her love whether she gave it to me or not. Every child is worthy of love.” — Richard Paul Evans.

11. “It is the selfish parents who are to blame. Pay attention, be involved in your children’s lives. They are your legacy, your only hope.” — Aaron B. Powell

13. “Did you have parents or just some people who thought they should own somebody?” — Catherine Lacey

14. “When a father, absent during the day, returns home at six, his children receive only his temperament, not his teaching.” — Robert Bly

16. “Anyone can have a child and call themselves a parent. Real parents are those who put that child above their own selfish needs and wants.” — Unknown

17. “To all you parents out there, don’t make your little girls, or little boys, so thirsty for love that they will want to drink water that will poison them.” – Lisa Bedrick

18. “The ones that love us least, are the ones we’ll die to please.” – Paul Westerberg

19. “Parenting is not for sissies. You have to sacrifice and grow up.” — Jillian Michaels

21. “Selfish people don’t consider how their decisions affect others. Their own convenience is all that matters.” — Unknown

22. “It is the self parents who are to blame. Pay attention. Be involved in your children’s lives. They are your legacy, your only hope.” — Aaron B. Powell

23. “Permissiveness is the principle of treating children as if they were adults; and the tactic of making sure they never reach that stage.” — Thomas Szasz

24. “As long as you continue to react so strongly to them, you give them the power to upset you, which allows them to control you.” –Susan Forward

25. “The most loving parents and relatives commit murder with smiles on their faces. They force us to destroy the person we really are: a subtle kind of murder.”– Jim Morrison

27. “A lot of parents will do anything for their kids except let them be themselves.” — Banksy

28. “Too bad for any parent who has become accustomed to ruling by force, because at some point the kids just get too big to slap around.” – Barbara Ehrenreich

29. “Children are not born for the benefit of their parents, neither are they the property of their family. Children belong to the future.” ― Anthon St. Maarten

30. “Who said that parents’ beliefs should be adopted by their children?” ― Lukasz Laniecki

32. “Controllers, abusers and manipulative people don’t question themselves. They don’t ask themselves if the problem is them. They always say the problem is someone else.” — Darlene Ouimet

34. “Are you a controlling parent? Are you devoting too much attention to your child? If the answer is yes, then turn some of that attention toward your parents. If you are good to your own parents, then your child will learn how to treat you in the future.” — Haemin Sunim

35. “Instead of promoting healthy development, they unconsciously undermine it, often with the belief that they are acting in their child’s best interest.” ― Susan Forward

36. “The more dysfunctional, the more some family members seek to control the behaviour of others.” – David W. Earle

13 Heartbreaking Signs Of A Toxic Relationship

38. “If mental abuse was a punishable crime, a lot of parents would be in jail serving a long term.” — Maddy Malhotra

39. “Too bad for any parent who has become accustomed to ruling by force, because at some point the kids just get too big to slap around.” — Barbara Ehrenreich

40. “Spanking a child is about the parent not the child. The child will learn more from positive correction than physical manipulation.” — Asa Don Brown

41. “Fighting became a way of life and seemed perfectly normal for your family.”– Steven Farmer

43. “Some scars don’t hurt. Some scars are numb. Some scars rid you of the capacity to feel anything ever again.” — Joyce Rachelle

44. “In troubled families, abuse and neglect are permitted. It’s talking about them that is forbidden.”– Marcia Sirota

45. “When you grieve toxic, abusive parents, you don’t just grieve the abuse, you grieve everything you didn’t have.” — Lily Hope Lucario

46. “Parental Alienation is an emotional act of violence that is aimed at an adult, but critically wounds a child.” — Steve Maraboli

47. “If your parents ignored you, or if they are just not emotionally available, or if they yell a lot, that is a type of trauma.” — Tucker Max

48. “All parents damage their children. This was their life together. Neglect. Violence. Silence.” — Mitch Albom

49. “Abuse grows from attitudes and values, not feelings. The roots are ownership, the trunk is entitlement, and the branches are control.” ― Lundy Bancroft

51. “An unpredictable parent is a fearsome god in the eyes of a child.” ― Susan Forward

52. “Fighting became a way of life and seemed perfectly normal for your family.” — Steven Farmer

Now that you’ve looked through all 57 toxic parenting quotes, which ones helped you feel less alone?

Or do any remind you of relationships that have suffered because you still find it hard to let people in?

If you’re reading this, it’s not too late to choose differently despite the risks.

You’re more resilient than you know. And as hard as you may think it is to know you, you’re well worth the effort. It’s not your fault your parents didn’t see that.