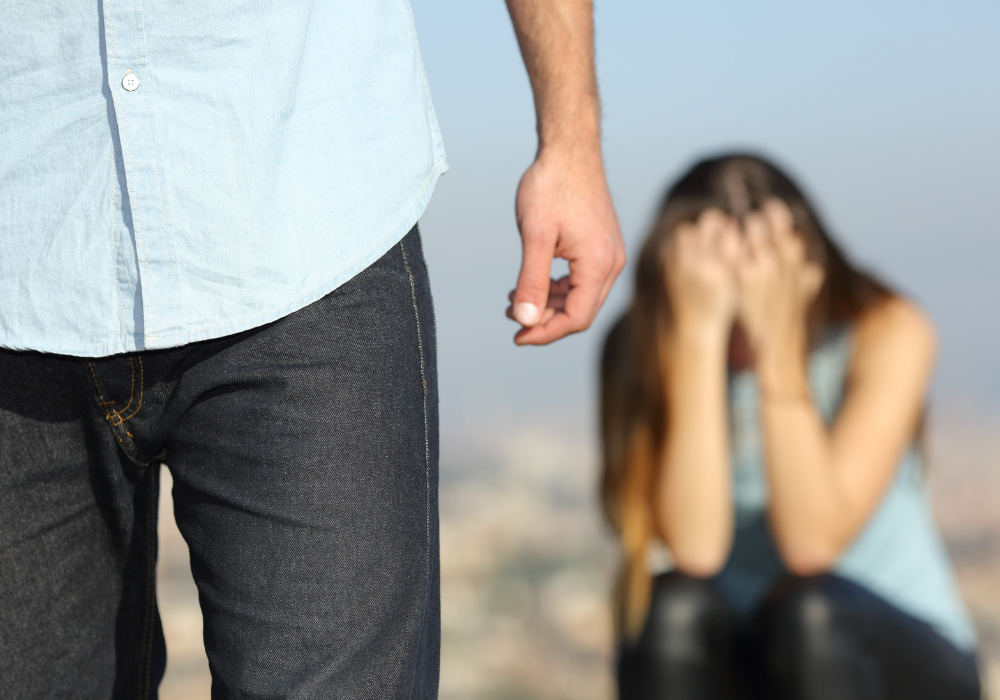 Will he come back?

It’s a question that recently separated people have agonized over since Cavemen Ken ticked off Cavewoman Barbie, and she furiously stomped off to Cave-Skipper’s bachelorette burrow.

According to science, there’s a 50/50 chance you’ll reunite with your man.

We’ve previously talked about signs that he’ll probably come back.

So today, we’re tackling the other side of the coin and breaking down signs you will never get back together.

You’ve probably landed here because you wonder if he’ll ever make his way back to you. So let’s review a handful of common questions.

How can you tell if he’s over you?

People signal when they’re “just not that into you.” The key is recognizing them, which can be difficult.

After all, when we love someone, we tend to laser in on the good things. Plus, our egos throw up protection shields.

But as a general rule of thumb, if he’s ignoring you, he’s probably over you. The same goes if he’s constantly friend-zoning you.

What makes a man come back?

The encouraging news is that 50% of couples that split up get back together at some point. However, the reasons for reunification vary.

Sometimes, men come back for the wrong reasons — like boredom and laziness. Other times, reunions happen because of genuine love.

Do guys always come back?

For better or worse, guys don’t always come back. Not all relationships work out — not all were meant to be.

One of the worst pains in life is unrequited love, but going through it is a rite of passage and a learning opportunity.

Will he realize what he lost?

It depends on the guy. Some men are mature enough to realize when they’ve lost a good thing.

Others, however, never learn.

Dudes in the latter group are often self-centered, immature, and not worth your time.

19 Signs He Will Never Come Back

Is he coming back?

Sometimes, the answer is no — and we’ve laid out the signs below.

Some relationships end in a way that makes it impossible to patch up. They’re the breakup equivalent of dropping a fragile vase off a 100-story building onto concrete. Sure, you may find some of the larger pieces, but it’s impossible to fix flawlessly.

Don’t waste time holding out hope if your breakup was equivalent to the vase drop. Do the requisite wallowing, then pick yourself up and move on! There really are other fish in the sea.

2. One or Both of You Said irrevocable Things

Sometimes, people say awful things for which no apology will ever suffice. Anyone who’s been on the receiving end of such invectives understands the destructive harm of cutting words.

Reconciliation might not be in the cards if your breakup featured one of these verbal spars.

3. It Was an Inevitability

Some relationships last way too long. Both parties know it’s never going to work out long term, but they stay because splitting would take too much effort. That, or both people fear being alone.

It’s a union of convenience, not love. When the split happens, it’s usually good because you realize that being single isn’t as bad as maintaining a perfunctory relationship.

4. He’s Not the Same Person

How long have you been in the relationship? Did you get together years ago? Is he a different person than he used to be? If so, then getting back together may not be in the cards, which isn’t necessarily a bad thing. People grow up and grow apart.

5. You’re Not the Same Person

He’s not the only one who may have changed. Perhaps you’re a different person now — and that may be for the better! Separations involving college sweethearts usually land here. I

t’s normal to think of yourself as a fully formed human being in your twenties — but that’s typically marathon-miles away from the truth. Romantic relationships from that period of your life rarely stand the test of time.

People grow by leaps and bounds between the age of 20 and 32, and life changes dramatically. There’s a big chance that your relationships at 21 won’t work at 31.

Of course, some people enjoy life-long friendships, but it’s not the norm, and they usually don’t involve romantic unions.

Does he have a history of loving and leaving? Does he have a track recording of growing bored with his partners and dumping them harshly? If so, he’ll probably do the same to you.

Men like that rarely — if ever — change. At 96, they’ll be running through ladies at the nursing home. It’s tempting to think you can rehabilitate such cads, but that’s just a lie we tell ourselves.

Put yourself first and leave him in the dust.

If someone ghosts or ignores you — digitally or in-person — they want nothing to do with you anymore.

Though incredibly rude, it’s now the norm and sends a clear message. If you’re beating down his door and he never responds, give up and go your own way. If you keep at it, you’ll come across as needy and desperate, which isn’t a good look.

8. He Blocks You on Social Media

It’s common for guys to block you on social media immediately after a breakup. If they want to get back together, they’ll usually unblock you after the initial fit of high dudgeon.

If they don’t, take it as a sign to strap on your walking boots and leave him in the dust. Please don’t waste a second pining after him.

We all make mistakes, and perhaps you made some during the relationship. If your partner can’t get over it and treats you poorly because of it, it’s time to move on. In these situations, it’s vital to forgive yourself no matter how bad the indiscretion is.

Beating yourself up for the rest of your life is not the answer. Wallowing will change nothing. It has the power to steal many good years from your life if it gets out of control.

10. He’s in a Serious Relationship

You wouldn’t like it if another person muscled in on your partner mid-relationship. Other people feel precisely the same way.

So if your ex has landed in something serious, it’s a sign that he’s probably never coming back. Respect that and move on up! There’s someone better for you out there.

When people tell you to move on from them, believe it. Don’t cling — doing so just makes things awkward for everyone.

Plus, in several years, you’ll look back and cringe. If he’s moved on, you should too. It’s a definite sign that he will not be knocking down your door anytime soon — or ever again.

12. He Returned Your Belongings

Returning your belongings is another surefire sign that he’s over the relationship and likely not returning. Often, men will hold onto your things if they want to reconcile.

However, sending it back means he’s trying to wash you out of his hair for good. It may hurt a lot in the immediate wake of the separation, but don’t linger in the sadness.

Remember: It’s impossible to have a good relationship with someone who doesn’t love you back.

Whether it’s a romantic or platonic relationship, dwelling in the past ruins things. For starters, it’s pointless.

Sure, we all need to learn from our mistakes. But once you grab the lessons, strut your way onto higher ground — in the present! Secondly, hanging out in the past is a mental health killer.

Thirdly, relationships that live in the past almost always end badly. If he cannot move on from it, the union is doomed.

14. He Avoids Your Friends

Does he go out of his way to avoid your friends? If so, that probably means he’s looking to make a clean, clear, and decisive break.

This is especially true if your friend groups overlap and he’s staying away from parties and events where your side may show up.

15. His Body Language Is Guarded

It happens. You bump into each other. Notice his body language. Is it warm and welcoming or guarded and awkward? He may still be carrying a torch for you if it’s the former. If it’s the latter, he’s likely not into you anymore.

Always try to let him set the mood in such situations — and then act a couple of notches colder. It may sound old-fashioned and calculated, but it works. Plus, it often feels great to rack up some “cool” points.

Did he do something terrible and now refuses to apologize? People with outsized egos usually take this route. Even if they know they’re wrong, they cannot bring themselves to do the right thing and say sorry.

As such, they usually don’t push for reconciliation because the underlying guilt eats away at them when they see you.

Offloading a partner like this is a blessing. It may not seem so immediately — but the last thing you want is a partner who can’t admit when they’re wrong.

There’s always the possibility that he genuinely likes you…as a friend. Yes, it stings. Yes, you wish it were different. But at the end of the day, if someone just isn’t feeling the passion, there’s nothing you can do to turn that around. People like who they like, and often there’s no rhyme or reason to it.

Besides, sometimes, gaining a good friend enhances your life.

This can go either way, depending on the guy. Some avoid eye contact when they’re madly in love. Others avert their irises when they’re disgusted with someone. The verdict depends on the situation and the individuals involved.

Has it been over ten months since you split? If so, and he’s not showing signs of wanting to patch things up, it’s time to find greener pastures.

Don’t sit around obsessing about when he will come back. Instead, hug yourself, treat yourself to a spa day, and get back out there.

What You Should Do If He’s Not Coming Back

Once you’ve come to grips with the relationship’s end, it’s time to start healing! How do you get over a man? We’ve got a five-point plan that works for a lot of people.

Not every relationship stands the test of time. If it’s over, that means it wasn’t meant to be, and something better awaits you on the horizon.