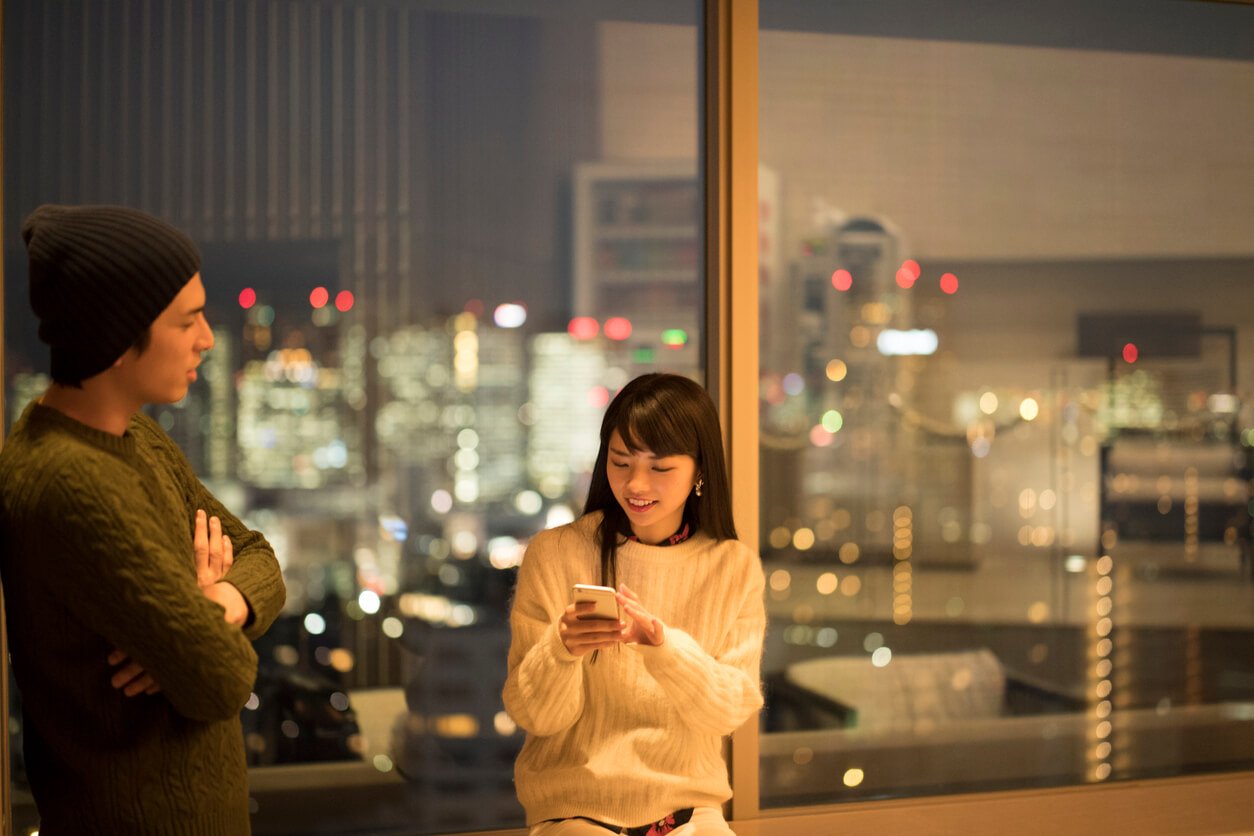 So there’s this guy.

Maybe you work with him — or he’s a friend of a friend.

Perhaps he’s a handsome stranger you met at the local coffee shop.

Whatever the case, you think there’s a mutual spark but aren’t sure because he never asks you out!

You’re wondering: What are the signs a guy is confused about his feelings for you?

We’ve got your back, and today, we’re breaking down 19 signs he is denying his feelings about you.

Why Is He Fighting His Feelings for Me?

Guys may fight romantic feelings for myriad reasons. To wit:

And sometimes, there’s no good — or even identifiable — reason why men fight their feelings.

Maybe they’re new to romance. Perhaps they were taught to bury emotions and don’t know how to navigate the terrain.

Whatever the case, there will be signals that he’s into you — whether he’s a master of his emotions or a bumbling novice.

19 Signs He Is Fighting His Feelings for You

We’ve talked about why he may be fighting his feelings for you. Now, let’s dive into the signals he may send when he is.

1. He’s Awkward Around You

We’ve all been there. A hotty crosses our path, and we cannot summon the cool to act normal around them. It happens! Hotness can bring out the inner dork!

And the same rules apply when it’s happening to you. If he has a difficult time playing it smoothly in your presence, it may be a signal that he finds you attractive.

2. He Makes Excuses To Seek You Out

If someone is manipulating their day for a chance to see you, then they’re likely feeling what you’re throwing down.

Nobody goes out of their way to see someone for whom they have no feelings. So if he’s following you around like a puppy, it’s likely a sign of his affection.

If someone is fighting their feelings for you, it may trigger them to avoid you. After all, nobody likes to appear like a nervous wreck around people they’re trying to impress.

But try not to confuse someone who avoids you because of feelings with someone who’s simply shy or introverted.

4. He Shows Off Around You

Depending on the guy’s nature, he may show off around you. It’s called the peacock effect.

Some people have a natural urge to flaunt. And if one of these folks is fighting their feelings for you, they may go overboard.

5. He Is All About Your Social Media

If someone hops on every single thing you post on social media, there’s a better than average chance they think fondly of you.

So if he’s leaving a comment on every Insta update — even the ones of your cat — and re-tweeting every link you put on Twitter, it’s likely a surefire sign that he’s into you.

It can be painful to look at someone when you’re hopelessly enamored with them! The agony of gazing into their eyes is just too much for the fragile heart!

So if a guy avoids eye contact with you, it may not be because he can’t stand the sight of you, but instead, his pining heart can’t handle all the feelings!

7. He Hangs On Every Word and Remembers Everything

We listen to people we like — and remember what they say. So if the fella who may be fighting feelings drops knowledge about things you’ve mentioned in passing, he’s probably hanging on your every word, and that’s a sign.

If there’s one thing that Lifetime movies and true crime podcasts have taught us, it’s that excessive jealousy is a no-good, horrible, awful thing.

But harmless tings of attention envy are a different story. They’re a natural part of the human emotional scale.

And if someone is pinched by the green-eyed monster when you focus on another person, there’s a solid chance that their feelings for you are more than platonic.

9. His Friends Give You Hints

Do his friends joke around that he’s “obsessed” with you? Do they tease that he’s always asking about you?

Either way, they’re telling on their buddy and putting his business in the streets! Guys don’t joke around like that unless there is something behind it.

10. Asks Your Friends About You

Does he ask your friends about you? How adorable! Learning things about you is a reliable sign that he’s into you.

However, if he relentlessly pesters people in your circle, it may be an early warning flag. It’s cute to ask questions about you casually. But hounding friends and family about every last detail can be suspect.

Time is a precious commodity, and when a guy sacrifices his, there’s a chance he’s trying to impress you.

Granted, some people are always around to lend a hand, so ask yourself if he’s the same way with others. If not, our helpful Harry probably has a crush on you.

When the guy who’s always nervous around you constantly makes it clear that he’s single, he’s probably projecting for a reason. In a weird twist, he may even ask about your available friends.

In these cases, the guy usually isn’t interested in dating someone from your squad; instead, he’s letting you know that he’s available.

13. He Always Takes Your Side

Does he always have your back — even when you’re hanging on a limb? If so, take it as both a compliment and a sign that he’s crushing hard. By always taking your side, he’s showing that he wants to support you.

What can we say? Boys and men can be immature rugrats and revert to playground behavior. So yes, if, out of the blue, a male who is usually lovely flips the script and flings a heap of rudeness in your direction, it could be one of two things.

First, he’s having a bad day.

Second, he’s caught feelings for you, doesn’t know how to deal and opts for the childish-rude route.

15. He Explains Himself to You When He Doesn’t Owe an Explanation

Even though you two aren’t dating, our crushing puppy constantly explains himself and doles out justifications in your presence. You never need to ask questions because he’ll offer up everything fit to print — especially if something untoward pops up about his past dating life!

This tendency to over-explain everything to you is a solid sign that he wants to be more than just friends.

16. He Notices the Small Things

It’s lovely when people notice a change in your hair or your new coat — and he’s usually the first.

Think about it for a second: who notices the small things? That’s right: people who are attracted to you! Sometimes, even the folks we love the most — like our family and closest friends — don’t notice when we make minor changes. But the people who idealize you always do!

In a way, it’s common sense. If a man spends a lot of time staring at you, there’s a 99.9% chance that he finds you attractive. The odds increase to 100% if you catch him looking at you and he quickly looks away.

After all, the .1% of people who may stare at you because of an emergency booger situation will continue to stare at that hanging mucus chad regardless of whether you notice them or not!

Is he blowing up your phone or constantly sliding into your DMs with silly and inconsequential observations? Excessive messaging is yet another sign that he has feelings for you.

To be fair, he may not even realize the extent of his communications. It’s just that you’re constantly on his mind, so he’s always reaching out.

Call it what you want — energy, a vibe, or intuition — but the bottom line is that you can feel his attraction. It’s palpable. The frequency is a bit more electric when he comes near.

That inner knowing is a pretty good radar, so don’t ignore it! Just make sure you’re not the only one who feels the spark.

What To Do When He Is Fighting His Feelings for You

We’ve talked about how to tell if a guy is confused about his feelings for you. Now let’s look at what to do about it.

For starters, you need to decide on your feelings. Are you attracted to your potential admirer? Would you welcome a date?

If you are interested and available, you can approach the situation in several ways.

The beginning stages of a relationship are often the most exhilarating. The uncertainty and butterflies are fun! So if you and a special guy are throwing each other vibes, don’t rush it. Relish the ride!