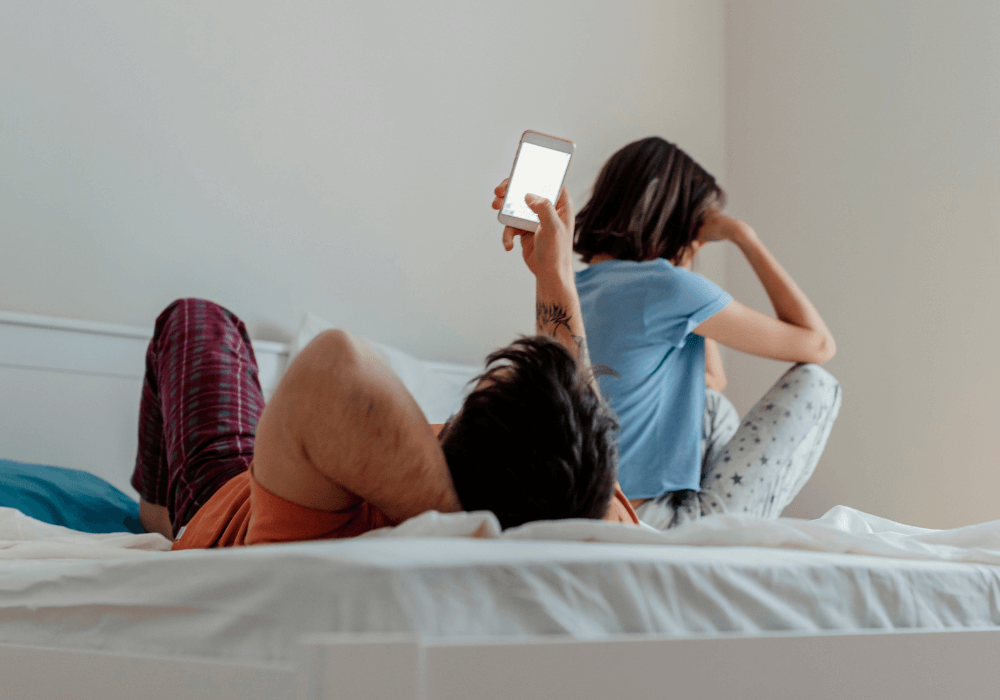 If you’re here, you’ve noticed your husband looking at other women.

It’s fair to ask, “Why does my husband look at other females online (or anywhere)?”

Whether he means to or not, he’s telling you you’re not enough for him.

But why does he do it?

Does he even notice or even care about what that does to you?

Why My Husband Looks at Other Females Online

When it comes to the “Why?” we’ve turned up a handful of common reasons why husbands look at other females.

At least one of the following is likely to sound familiar:

Presumably, the best way to find out why he looks at other women is to ask him. But it can’t hurt to know the usual suspects. If he doesn’t want to talk about it, or he gaslights you when you ask about it, that’s enough of a red flag.

Whatever his reasons for doing it, there’s no justification for his ogling women other than his wife. Not calling him out for it would be underreacting.

His creepy habit may not mean your marriage is doomed. But it’s a clear danger sign.

What to Do About Your Husband Looking at Other Women Online

Don’t ignore or brush it off when your husband looks at other women online (or anywhere). It can quickly destroy a relationship if either one of you pretends it doesn’t matter.

Perving on women over the internet is tougher to catch because you’re not always able to see what he’s looking at, especially if he’s being sneaky about it. But once you know what he’s doing, how often, and with whom, the following tips are worth your time:

1. Pay attention to what he’s doing.

Make sure you know exactly what he’s doing. Be aware that he may be more secretive with some of his behavior, but don’t assume that he’s doing things for which you have no proof. Start with what you know is going on, and see if you can learn more.

Once you have enough evidence that he’s checking out other women online, it’s time to let him know what you’ve noticed.

2. Bring your concerns out into the open with him.

Talk to him about what he’s been doing. And tell him how you feel when you notice him looking at other women. If he’s also interacting with them — via social media, texting, or chat rooms — tell him what you know and what that means to you.

If he offers a genuine apology (not a lame “I’m sorry you feel that way” response), there’s hope, as long as he backs that up with action.

If, on the other hand, he dismisses your concerns and tells you it’s nothing and that you’re overreacting, those alarm bells in your head should get louder.

If he’s genuinely sorry for how his behavior has affected you, it’s easier to empathize with him and show genuine concern for what he feels is missing in your marriage.

Ask him to be honest about what he’s looking for with these women he’s not getting with you. Does he feel that you’ve lost interest in him? Or is he curious about something you’d rather not do?

While it’s not all on you to keep the spice in your marriage, it can be helpful to know more about what he needs from you. You, in turn, can tell him what you need from him.

4. But don’t excuse his behavior.

You’re not excusing his behavior, but it makes sense to try to understand the situation from his perspective. And it can get you closer to a solution you’re both comfortable with.

Empathy gets more challenging when he insists he’s done nothing wrong and that you’re just acting “crazy” or jealous.

This was never about your failure to satisfy him. His apparent need to do what he claims “all guys do” is about his own underdeveloped sense of what it means to be in a serious, exclusive relationship with someone. And you don’t have to accept it.

If he recognizes that his behavior is wrong and agrees to put a stop to it, there’s hope for the relationship. But words aren’t enough. Ask him what he’s willing to do to ensure he won’t be tempted to fall back into old habits.

If he’s not willing to stop ogling other women, and you even catch him doing more than that, it’s time to consider the possibility your marriage is already over.

Let him know what he needs to do if he wants the marriage to last. If he’s not willing to budge, start looking at your options.

Anger is understandable. But keep your reaction in proportion to the offense. Once you lose control of your temper, you lose the opportunity to learn more and to get closer to an agreement on what to do next.

You don’t have to be an emotionless robot, but try to keep your temper in check. If anger is at the helm, you’re far more likely to do or say something you’ll regret.

Find a different outlet for your anger before you sit down to talk to your husband about his behavior. Yelling might feel well-deserved and satisfying, but it gets in the way.

97 Of The Best Words Of Encouragement Men

7. Try couples counseling and other therapies.

If he’s willing to go to couples therapy with you, commit to weekly or bi-weekly meetings to discuss the situation and gain a deeper understanding of each other’s perspectives.

A couples therapist can help you both get to the bottom of why your husband feels compelled to look at other women online (or anywhere). It’s up to both you and your husband to honestly answer any questions that come up.

Once the truths are on the table, you can talk about what to do next.

You might both benefit from spending time apart from each other. No need for a court filing here—unless you’re both in agreement that legal separation is the natural next step.

You could just agree to spend some time living in separate places to see whether you’re happier apart. Or, if your budget allows, you could go on separate vacations.

Whatever you do separately, use that time for self-care and self-reflection.

If your husband isn’t willing to put a complete stop to his creepy and inappropriate behavior toward other women—or if he agrees to stop but then continues behind your back—it’s time to consider something more drastic and permanent (but still legal).

If you’re both of a mind to end the marriage, start talking about what that will look like for both of you. The less contentious the divorce, the easier it will be to move on.

How Can I Check If My Husband is Looking at Women Online?

If you’re not sure whether your husband is checking out other women online, use the following tips to find the evidence you need.

Now that you know what to do when your husband looks at other women (online or everywhere), what stood out for you most? And what will you do today to get closer to the truth—or to get your marriage moving in a better direction?