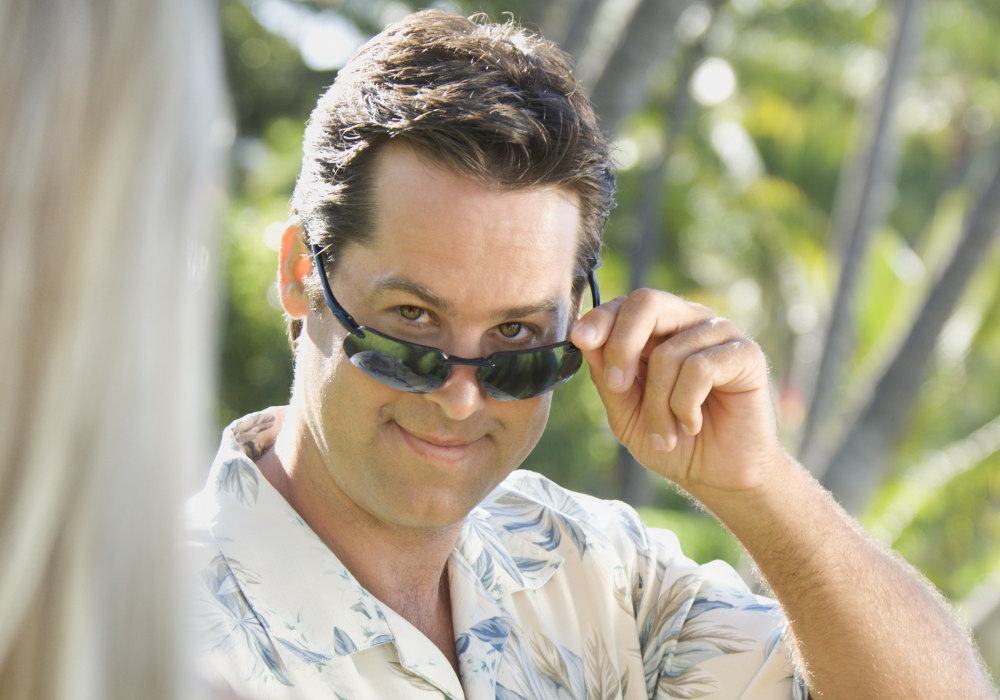 Some women find it flattering; others deem it inappropriate and creepy. So today, we’re unpacking the highs and lows of a guy checking you out.

What does it mean when a guy scans you from top to bottom?

Is it always a sign that he’s sexually aroused?

Or could there be other reasons?

Is it always rude?

Or are there perfectly innocent explanations for a body scan?

Is It Rude for a Guy To Scan Your Body?

Whether it’s rude for guys to eye-scan women’s bodies is dependent on the situation and the recipient’s personality.

As they say: One person’s annoying is another person’s flattering.

There are a few common-sense guidelines for when it’s rude and when it’s acceptable.

When Is It Rude To Scan a Person From Top to Bottom?

When Is It Not Rude To Scan a Person From Top to Bottom?

What Does It Mean When a Guy Scans Your Body? 7 Possible Reasons

When a guy is checking you out, what is he thinking?

The possibilities are endless, but we’re breaking down seven likelihoods today.

1. He’s Checking You Out

Yes, if you catch a guy looking at you longingly, from head to toe, there’s a good chance he’s checking you out.

Most guys will try to steal a glance when you’re not looking, but overly confident ones will make a show of their interest.

Some people may find this type of behavior annoying, but science does play a role. At the beginning, middle, and end of the day, we’re mammals with biological instincts. Attraction factors into the formula when people are on the prowl for partners.

2. He’s Attracted to You

If a guy has met you before and continues to scan you from head to toe every time he sees you, there’s a 99% chance he’s attracted to you. This behavior is common among shy guys and men who know you’re in a relationship.

If you’re single and open to his advances, consider other signals. Is he nervous around you? Does he ask other people about you? Does he compliment you? If so, the attraction is likely mutual, and you should go for it!

A guy’s body language reveals a lot, and for many of them, it’s difficult to make eye contact with women they fancy — especially younger guys. Instead of keeping level eyes, they tend to wander all over the place, including up and down your body.

4. He May Be Taking Mental Notes

You catch a guy staring at you from across the room. He’s downright studying you. What’s that all about?

In these instances, he may be taking some sort of mental note.

Maybe you’re at a networking event, and he’s keeping track of someone you’re conversing with. Perhaps he’s noticing your dress because he thinks it would look great on his woman.

In these scenarios, the reason for the stare may be perfectly platonic.

The Only List You’ll Need Of 311 Likes And Dislikes

119 Of The Best Compliments You Can Offer Someone

It’s happened to all of us. You see someone from afar who appears to be signaling for your attention, but at the last minute, you realize they’re connecting with someone behind you.

The good news is that it’s not as embarrassing as it feels because people usually don’t notice you noticing them in this setup.

6. He Has a Neurodivergent Condition

People with certain neurodivergent conditions may be more prone to stare and fixate on things and people. Try not to take it personally; it’s a biological instinct for them.

If you don’t know much about the issue and want a fun and easy introduction to the subject, check out “All Cats Are on the Autism Spectrum.” (It’s also a fun book for all you cat parents out there.)

7. You Remind Him of Someone Else

Similar to the “behind you” missed connection is the “is that her” scenario. This happens when a guy thinks he knows you but can’t figure it out, so he keeps looking.

This situation can go several ways. If it’s a long-lost connection that you welcome, great! If it’s someone you’re about as happy to see as a case of Covid, duck out!

But it could be the third option: someone you don’t know with great romantic potential. Hey, rom-coms do happen in real life occasionally.

What Should You Do When a Guy Is Checking You Out?

What do you want to happen? Are you interested in the guy who’s looking you up and down? Or is he as appealing as a bowl of rotten fruit with a glass of curdled milk?

If it’s the former, and you want to encourage an approach, then:

If you’re not interested and want to halt any further advances, then:

Checking people out is a part of life. Sure, it may be annoying and inappropriate at times, but it’s often harmless. You know what crosses the line; stick to your instincts, be reasonable, and do what makes you feel most comfortable.