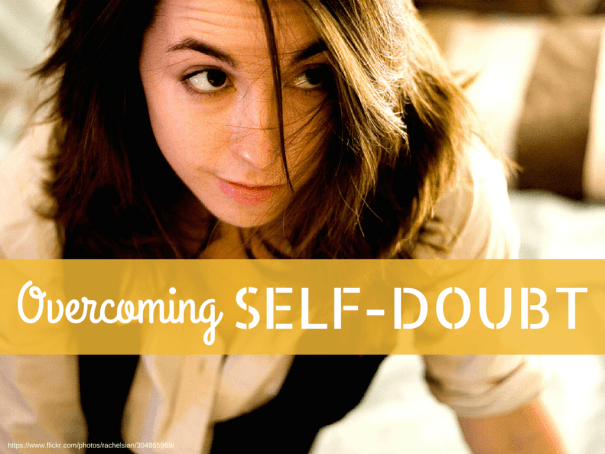 Have you ever had a dream, desire, or idea that you wrote off because you didn't believe that you could accomplish it?

“Nobody knows who I am. I don’t have an Ivy League education. I’ve never done anything exceptional. Who would care what I have to say?”

I had been blogging and building businesses online for three years, and I had just noticed a trend in the types of questions I was being asked.

People wanted to find out how to do what I was doing, and because I enjoy inspiring and teaching others, I had an idea to start a blog to help others build careers online through solopreneurship and micro-businesses.

But, without even giving me a chance, my self-doubt mantra began, and I started telling myself that there is no way I could be successful.

After all, there were so many successful bloggers writing about a similar topic online, and they were making six figures a month! Who would want to learn from me? I wasn’t making six figures. I hadn’t written a book or had many huge media mentions. I was just doing work that I loved to do and making money doing so.

After telling myself that I wasn’t worth listening to, that I would never be successful, and that nobody would read my blog, I had effectively talked myself out of the idea. I went about my life with that idea weighing on my mind, nagging at me every time I talked about online business with a friend or family member.

A few months later, I came across a blog post by Michael Hyatt called, “Are Your Beliefs Keeping You Stuck?” The post made me realize that my mantra wasn't a voice of practicality — it was fueled by self-doubt and holding me back from making my mark on the world.

Before the self-doubt monster took ahold of me again, I got to work building the website that I knew I wanted to build.

And it turns out, my self-doubt was wrong. I launched that blog and had 3,267 views on the very first day. People were interested – and maybe even because of my lack of apparent “advantages,” which my self-doubt used in its case against me.

Self-doubt will deceive you and pull you away from your dreams. But I know from my experience, you are capable of far more than your self-doubt will lead you to believe.

How Self-Doubt Holds You Back from Success

Warren Buffett has said that “too many women continue to impose limitations on themselves, talking themselves out of achieving their potential.” In a study of over 2,000 women, 24% believed that they would have been at a more senior level in their careers if they didn’t struggle with self-doubt.

Self-doubt is not an issue specific to women. It’s a human issue which affects men as well. Actor Will Smith has admitted to battling self-doubt every single day. It is poison, and it holds so many people back from accomplishing great things. Self-doubt holds us back from even stepping off of the starting line, let alone trying to participate in the race.

Fortunately, you don’t have to let it hinder your potential forever. The self-doubt monster can be slayed.

The first step to abolishing self-doubt is easier said than done: recognizing it. It’s easier said than done because it’s easy to mistake self-doubt for realism. You will think of a great idea for a website, an app, or a business and you'll brush it off by telling yourself, “You have a family and a mortgage to pay. You can't just quit your job and start a business. That would be irresponsible. Who will pay the bills?”

Sure, it sounds like realism at work, but what you are really saying with this inner dialogue is this: “I don't believe that I can be successful in this. I believe that I would fail and my family would pay the price.”

Every time you shoot an idea down in your head, ask yourself, “Is this self-doubt, or am I being realistic? Have other people done something like this successfully?” If the answer to the second question is “yes,” then it’s probably self-doubt rather than realism.

2. Build a Mantra to Put Self-Doubt to Rest

If the hardest step to abolishing self-doubt is recognizing it, the most freeing step is putting your self-doubt to rest.  I have a mantra that I use when I recognize that I’m engaging in self-doubt: “People dumber than me have done it.”

Related: How To Gain Confidence When You Feel Insecure

This is not to be snarky or rude but to remind myself that I am a capable, smart person, and that there are people out there who have accomplished great things with less knowledge, opportunity, and experience than I have.

These things are certainly not impossible or even infeasible. Often, the barrier is simply self-doubt.

3. Re-Program Your Mind to Reject Self-Doubt

Self-doubt is a negative thought, and it’s entirely possible to re-route those thoughts to banish self-doubt. The brain is a highly programmable organ.

The idea of re-wiring and changing the way your brain works is called neuroplasticity. Barrie describes what can be done with neuroplasticity in her article How Positive Thinking Rewires Your Brain.

Recognizing negative thoughts and redirecting them to positive thoughts changes your brain over time, and if this is done consistently, your brain will be re-wired to default to positive thinking. Every time a thought of self-doubt pops into your head, redirect it immediately to something positive. Build this habit ruthlessly and over time, you’ll see a change in your thought pattern.

This is crucial, because if you don't prove to yourself that you can be successful, you are more likely to fall into self-doubting patterns over and over again in the future.

Every time you achieve something, you set the bar higher for yourself. Achievements raise the standard, so you begin to believe that you are capable of more. They help you gain confidence, which is the nemesis of self-doubt.

Whatever you do, ensure that you're putting in your best effort. Start small, and generate small wins.

5. Recognize Doubt from Others – But Move Past It

If self-doubt is a fire, doubt from other people is the fuel.

As you begin to become more confident in yourself and your capabilities, you may notice well-meaning people around you projecting their own self-doubt onto you. They might shoot down your ideas or find reasons why you shouldn't pursue them.

It's easy to give up or not even start when other people tell you they don't think you can do it, or that it's not realistic, but use that as a motivator to prove them wrong.

Understand that people who verbalize their own doubt aren’t bad people. They are usually coming from a good place. Usually their doubt that you can accomplish something comes from their own self-doubt.

If you let the opinions and self-doubt of others influence whether you take action on your idea, it's a sign that you haven't successfully defeated your own self-doubt.

6. Figure out Your Self-Doubt Triggers and Set a System to Deal with Them

Self-doubt is an emotion comparable to anger. Habitual triggers catalyze it. Maybe you begin to doubt yourself when you have an idea that requires expertise that you don’t yet have.

Or maybe you engage your self-doubt when you’re overwhelmed. A common self-doubt trigger is comparing yourself to others. Recognizing and setting up a system to deal with the triggers will help you move forward.

If I have an idea, and I begin to think about the very successful people who have done something similar in the past, I begin to doubt myself. This is because I am both comparing myself to those people, and I'm overwhelmed by the thought of how much work they must have put in. Then, I begin to tell myself that there is no way I’ll ever be able to make it like they have.

Never mind if my goal isn’t to make it exactly like they have. Self-doubt is not logical. When I begin to think like this, I correct myself. Sometimes, it takes me awhile to recognize the trigger, but when I do, I have a system:

At the end of this exercise, I am always surprised to see how much I am capable of. This system works for me, because it doesn’t give self-doubt any room to protest.

The Truth about Self-Doubt

If you want to live up to your potential and accomplish great things, it’s crucial that you put your self-doubt in its place now, before you let too many opportunities slip through your fingers. You probably won't ever be completely free of self-doubt. Everybody, no matter how successful, struggles with it occasionally.

But the steps I've listed will help you recognize the self-doubt monster when it sneaks up on you, so you lock it up where it belongs.

Sarah Peterson is the author of Unsettle, where she helps people who don't want to live their lives choosing off of the standard menu of options build an income for themselves through online micro-businesses and solopreneurship.

10 thoughts on “Overcoming Self-Doubt: How To Believe In Yourself To Accomplish More”