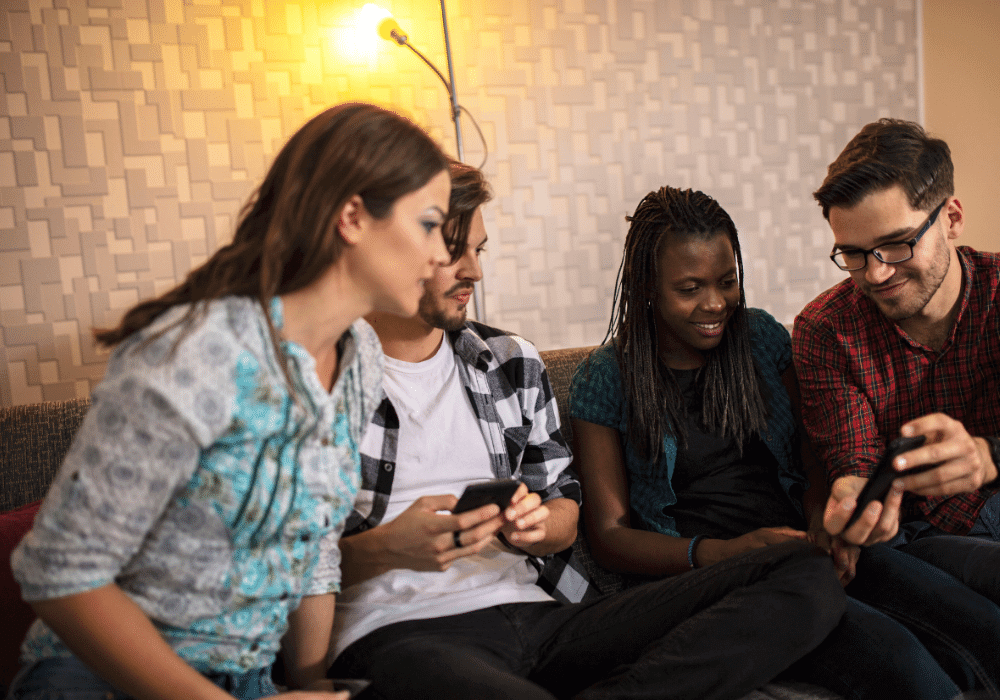 The most significant advantage of being a social chameleon is the ability to blend into any social environment.

They pick up on social cues and take on the personality traits of those around them.

Take a moment just to imagine a total lack of social awkwardness and how that must feel.

If there’s a downside to this ability to “go native” in any social circle, it stems from the very thing that drives chameleon personalities to do their thing and blend in: the fear of standing out.

What is a Social Chameleon?

All of us tend to pick up mannerisms and accents we happen to notice in other people. We might even unconsciously mimic them.

But most of us don’t change our personalities to match what we think others expect of us. We adapt to some degree to make socializing easier. But we’re still the same people.

The chameleon personality type can walk into a room, quickly pick up on the expectations of those around them and become the life of the party or a quiet, thoughtful participant — or whatever they need to be. Meanwhile, their private self remains hidden.

Their goal (conscious or otherwise) is to create a public face that leaves a pleasing and memorable impression. And they generally succeed.

At the opposite end of the social adaptivity spectrum are the “social zebras,” who don’t change their stripes to suit their company. Both extremes have their downsides.

Is It Bad to Be a Social Chameleon?

Being a social chameleon has its perks, especially when your job requires you to be all things to all people. Whatever your chosen career, you have to meet the expectations of those who hold the keys. You become exactly what they want you to be.

The downside comes in when you realize you’re not entirely sure of who you are at your core. When you’re used to changing your public face to fit each situation, it can become more challenging to recall who you are when no one is around to impress or win over.

Most of us are somewhere between the two extremes of a social chameleon and social zebra, but it’s worthwhile to understand the benefits of both. Look through these seven key traits of the chameleon personality type to see which, if any, are true of you.

1. You prioritize making a good impression.

In fact, making that golden impression is a higher priority than being authentic or standing up for what you believe. You know this about yourself, and you’re cool with it.

You’d rather get along than risk alienating people, so you’re more likely to keep your true self and beliefs hidden — and that’s assuming you have a firm understanding of either, which is not something a social chameleon can take for granted.

Most of the time, when people are around, you show your mutagenic public face rather than risk rejection or criticism by just “being yourself.”

2. You look to other people for cues on how to act.

You recognize that many people expect you to conform to their idea of what behavior and beliefs are right or wrong, and you’re good at picking up on those ideas.

To blend in and gain their approval, you anticipate and meet their expectations, making them feel validated and admired. You even pick up mannerisms and accents or inflections (consciously or otherwise) and mimic others’ behavior, which helps you blend in.

It doesn’t occur to you to simply come as you are and not worry about what people think of you. Too much is riding on your performance as “one of them.”

Do You Have These 11 Highly Useful Traits of a Hardworking Personality?

3. You’re used to thinking or feeling one thing and doing the opposite.

This is “when in Rome” taken to an unhealthy extreme. You might be consciously aware of what you’re feeling, at least on some level, but you’ve learned not to give that away. No one would describe you as someone who wears their heart on their face.

You can’t afford that kind of transparency. And you can certainly help it.

Think of a situation where you’re offered a treat you honestly detest, but you know the one offering it wants you to love it as much as they do.

So, without giving anything away, you brighten up, take a bite, and convince every witness that you’ve just discovered something you can’t get enough of. No one watching would guess you’re suppressing your gag reflex with the control of a zen master.

4. You take imposter syndrome to a whole new level.

You don’t dare show your private face to those who (you sense) would not appreciate it. You become whoever you need to be when the need arises.

Even when you have a moment just to be yourself, switching to your private face isn’t something you do without reservations. As long as someone else is in the room (or might be spying on you), there’s always the chance you might be exposed as a fraud.

It probably won’t be evident to other people that you fear showing too much (or any) of your true self. Even as you keep your private self hidden, though, you’re aware of how others would perceive you if you didn’t.

To most people, your public face — the one you show them — is your true self at your best.

5. You easily adapt to careers that require psychological juggling.

Think politics, law, sales/marketing, theater, or diplomacy. In these careers, to mimic successfully is to not only survive but triumph. Your chameleon traits give you a decisive edge in these careers over those who value authenticity over “getting to yes.”

It’s not that you don’t care about authenticity or personal beliefs. You’ve just learned to compartmentalize those things to keep them out of your way when you need to make the right impression.

If meeting your career goals means putting your reservations in tiny boxes and sealing them shut, that’s what you do. And it makes you very effective in your chosen career.

6. You don’t get along well with social zebras.

If there’s anyone who threatens your calm, collected exterior, it’s the person at the opposite end of the social adaptability spectrum. The social zebra values authenticity over making a good impression.

They don’t even bother trying to be more like you. They’ll risk alienating other people just to be their unfiltered selves. And even if they’re not “in your face” about it, it still feels like an insult. They don’t see you as an example to follow. And that irks you.

So, you might feel a need to criticize them or call them out for not being more like some ideal you aspire to — because you need to convince yourself that your way is not only legitimate but better than theirs.

7. You’re less likely to commit to a romantic partner (or stick with one for long).

Since your relationships tend to remain on the surface, and your success as a social chameleon depends on keeping them there, you’re not as likely to commit to a long-term relationship.

If you do enter into one, you’re less likely to form a strong emotional bond with your partner. You’re also more likely to fantasize about other people while you’re in a relationship with someone.

You feel less attached to your partner than a social zebra would feel toward their partners, and you’re more likely to cheat. That won’t stop you, though, from working to create and maintain the impression that your romantic relationship is superior to most, as the public face of your relationship is an extension of yours.

How to Use Your Chameleon Personality to Your Advantage

Exhausting as it might sound to live at this extreme of the social adaptability spectrum, it is possible to thrive as a social chameleon if you adopt the following strategies:

The more aware you are of your social chameleon tendencies, the more you can consciously choose to spend time being your authentic self. You need that time to recharge your batteries and feel happy about who you are.

Are you a social chameleon personality?

Now that you know what a social chameleon is, which of their traits felt familiar to you? Or are you closer to being a social zebra?

Both extremes have their challenges. Neither is better than the other.

And if you identify with chameleon personality traits, you can learn to incorporate healthier social and self-care habits while retaining your social adaptability.

With balance, you can have the best of both worlds.